The new ‘entry level’ Greenway Ride got off to a great start today, with Jill, first timer Sue and three-and-a-half Dave’s (I was the half – David’s my middle name) making it to Sophie’s café via Clint and then up Hollins Lane to rejoin the Greenway back to Harrogate. We also had John W and Dennis for company on the way out before they left us at Ripley for an extra loop round Nidd.

Today’s ride was arranged at the last minute at the request of David S recovering after breaking several ribs nearly two months ago while walking on icy paths. The ride also appealed to his wife Jill, and to Sue, also a Wheel Easy ‘wife’. This is absolutely what this ride is all about – an opportunity for recovering and occasional cyclists to enjoy a leisurely and largely traffic free morning out on their bikes. For Sue this ride was part of her Iron Man challenge for charity – swimming 2.4 miles, cycling 112 miles and running a marathon, not all at once, but throughout March. I’d not heard of this and thought it a brilliant idea.

There was a unanimous decision to tackle the hillier section along Hollybank Lane rather than stop in Ripley. The steep hill to Clint proved a walker for one Dave, not surprisingly after several weeks of enforced rest, though we all managed the others (albeit two of us on ebikes). Sophie’s was the perfect stop as usual, then it was up to Killinghall, left at the primary school (a new lane for two of the group) and back to the Greenway, busy with cyclists and walkers of all ages enjoying the sunshine, quite warm in the more sheltered spots, and daffodils and crocuses reminding us that spring has nearly sprung. Malcolm 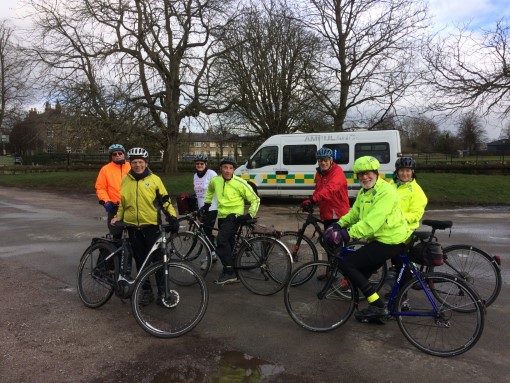 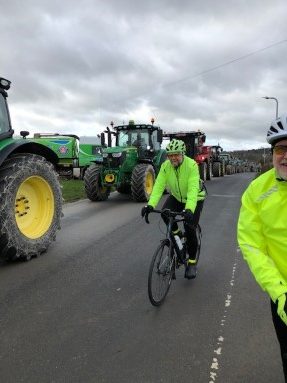 A very select, ad-hoc sub-group of the medium ride decided to head vaguely in the same general direction as the main group. We were 4 in total, and Brian was the main decision maker, and Geraldine was the one riding in front without knowing where we were going… At the Showground, we encountered an enormous number (and I mean hundreds) of tractors (with orange lights flashing). They were doing a charity ‘run’ (drive?) to raise money for Yorkshire Air Ambulance, something they have done for four years now. We were keen to avoid getting too mixed up with them, but they overtook us on Forest Moor Road, but fortunately they did not follow us along Abbey Road. We encountered them again on Boroughbridge Road, but we turned left after Knaresborough towards Farnham and Arkendale. After brief discussions, we turned left down West Lane after the Bluebell and towards Staveley and Burton Leonard. We met up again with the tractors there, and were slightly concerned when we saw them all turning down the small road to the Mountgarret estate, as we had planned to follow that route back towards Ripley. Fortunately, they didn’t go far along that route, and we crossed the bridge at the ford by the Lime Kilns, which had a very high water level: we needed to lift the bikes over the stile, as we couldn’t access the steps after the gate. Back along Ripon Rowel to Nidd and Ripley, where we had coffee and craic, with Paul B entertaining and informing us.

About 24 miles (covered fairly slowly because of tractors) Joe 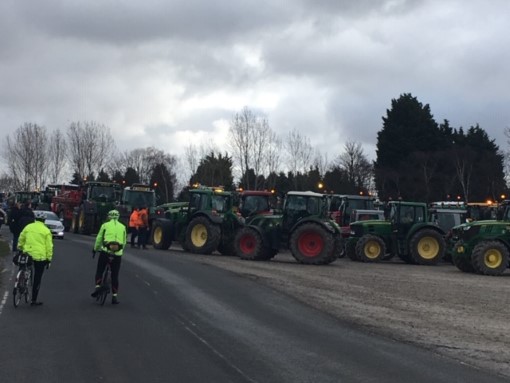 The Easingwold ride was a popular option this morning. After the various fast, long or brisker groups had departed, Liz F and Chris R led off a group of seven riders towards Low Bridge. Our group had a slightly delayed start as Debby had trouble with her chain, but swift help was at hand with Mike and James coming to the rescue. Shortly after we set off we could see some prominent flashing lights ahead on Hookstone Chase. Mike had already told us about the Young Farmer’s Tractor Run event taking place today, and so a quick decision made to detour to Starbeck and down Knaresborough hill. We did get caught up with some of the tractors on the rather chaotic main street, but James led us down Scriven Lane on a nice quiet road towards Lingerfield and we rejoined the route at Farnham. After that progress was good until just before Great Ouseburn where Liz P had an unfortunate skid and found herself on the ground. Happily (apart from some bruises which were probably going to appear later) she and her bike were still in good condition…. Dave Siswick was riding beside her at the time and he had said at Hornbeam that we were to give him plenty of clearance in view of recent events! Our ride continued pleasantly to Easingwold in a fair amount of welcome sunshine and fortunately there was room for all eight of us to have a very pleasant break at cafe TeeHee. Well-fortified with good food and drinks we were ready to face the strong headwind. Good team work meant good progress on the route home through Raskelf, Boroughbridge and Minskip. More sunshine than we had thought was a bonus and it was really good to see Dave S back with us on his first ride since his two operations.  Monica W 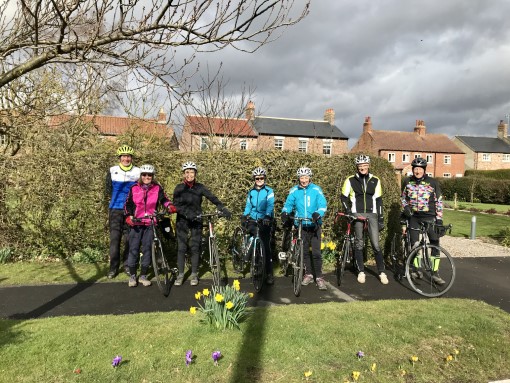 Just nine riders left Hornbeam for Easingwold in the Medium Plus Faster group on a day which promised wind and scattered showers. Progress was as normal until we reached Forest Moor Road, where it became evident that our route was also being used by a Tractor event – other silly ways to add tons of CO2 to the atmosphere are unfortunately available! We escaped them down Abbey Road and Chain Lane but had two more encounters, before normal service was resumed when we broke through a small gap in the procession at Ferrensby. Apart from a close shave with an oik in a pick-up who thought he could overtake round a blind corner and swore at us for his own stupidity, it was then plain sailing onwards to Easingwold, where we were accommodated in a back room at the Olive Branch. For a Sunday morning the service was reasonably quick and friendly, but the coffee was tepid and the bacon butties soggy, so not top marks.

On the way back tired legs and a strong headwind conspired to slow us down a bit, but we arrived back in Harrogate dry and in pleasant sunshine.  Dave W 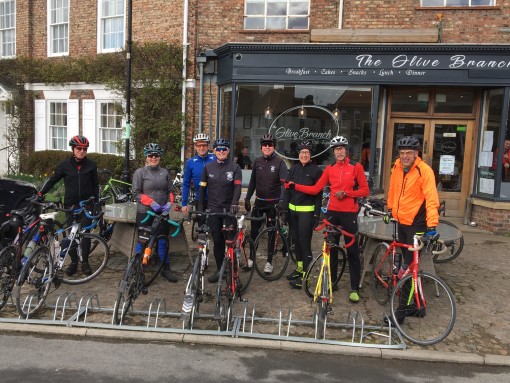 Not sure what happened but it seemed to be at Easingwold in the café I woke up. I had climbed Ingleborough in ice, snow and wind yesterday and Mike W reckoned that my brain had just thawed out on reaching the cafe. To recap the Medium Plus cyclists split into various groups at Hornbeam and for some reason I thought that I was in David’s group only to find out Steve was the leader of our group.   From Hornbeam Steve, Mike W, Colin, Chris, Declan, Tim and Charlie plus me set off and confusion reigned as the Young Farmers tractor rally scattered us throughout Knaresborough. Reaching Farnham, I found myself detached from the rest and behind Monica’s group. All the Medium Plus groups merged at the top, Charlie stayed with the other groups and Steve (who I thought was David for some reason) took the first group which included me. It was not too windy and the sun was shining as we set a fair pace. Through Arkendale to cross the main road we met the tractors again, a quick dash across the road stopped us from being made into hay bales.  Across the busy main road onto Marton and Little Ouseburn over the toll bridge at Aldwark and on to Easingwold. Jill and John cycled passed and was at the café first. This is where confusion reigned again for me, our group was alone upstairs in the café. Helen, Jill and John wandered past to the loos s so not sure who I belonged with!! Mike W made us all wash our hands rigorously before having our lunch I wonder why! After tales of life in Knaresborough as youngsters from Mike, Colin and Chris, who bought his bike on tick from a bike shop no one could remember, to his Air cadet’s flying days and full of good food it was time to hit the road again. A photo outside the café was taken, we shuffled along to next door which was called the White House, (don’t think he was in) for some yoga and daffodils. I am not sure which planet I was on but I think that I was now awake enough to be elected ride reporter. A very strong headwind made it heavy going as we ploughed on without the tractor to Boroughbridge, Minskip and Knaresborough hoping there was not any more tractors. Colin departed and the rest of us cycled up Knaresborough hill, at the top we all went different ways home. A grand day out as Steve lead us out and back. 48 miles. Liz 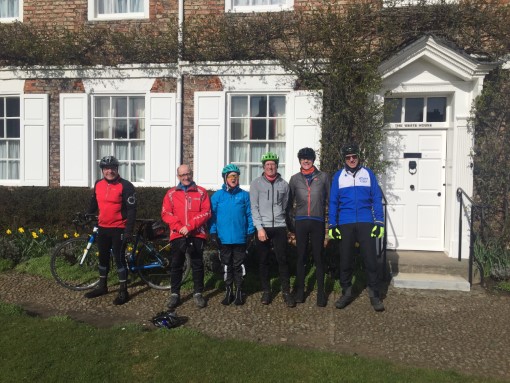 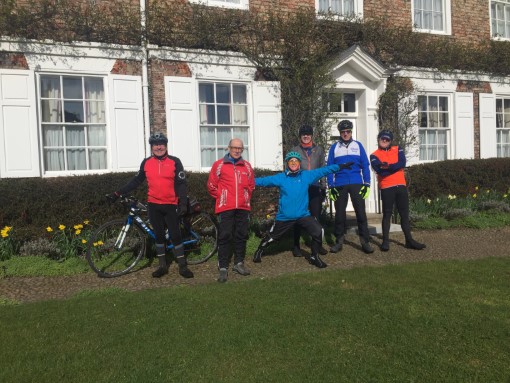 Once the Medium Plus groups had sorted themselves out it left four riders looking for a home.  We set off to Low Bridge Knaresborough but ended up in a Tractor-Fest.  Having made slow progress to Low Bridge we continued on our way but suffered more delays, namely the Tractor-Fest again and Peter R‘s mudguards were playing up. We decided to avoid the tractors by going via Lingerfield. We then made steady progress to Easingwold passing another Medium Plus Group several times. The return journey to Harrogate was a bit hellish due to the gusty headwind, but rotating the lead rider on a regular basis gave us some respite.  PCJ 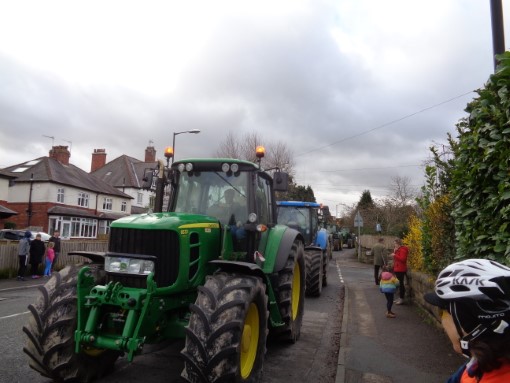