Now this was a really perfect day …nearly a proper spring of a day.  And a first outing with wheel easy for the e bike. Only one small problem I still, after several weeks of grey damp practising, was not quite sure how to work the thing correctly. It all seemed very random.

Anyway, lots of nice people wanted to join the Poddlers this morning….  regulars Sue and Monica; kind Barbara who said we should wait for jolly Diane; Joe and Geraldine who had child care duties…that could have been useful Joe knows how bikes actually work; Brian who had been having lots of operations and Paul who mentioned excitedly he had retired.  We set off to greet the E.G.s at Low Bridge and seemed to do a bit of zooming to Farnham, Occaney, Staveley, and Boroughbridge…..all very pleasant and painless…..for some…I was concentrating so hard on having a bit of extra bike power there was no time to chat en route.

We had a variety of refreshments at the Bean cafe and met Jen just back from a sunny week in a glorious Spanish airbnb. We saw J and G’s interesting photos Ethiopia and eventually tore ourselves away for a remarkably speedy trip home along the same route as we had come…

Strange I’ve never ever really been out at the front, certainly rarely over take people and had forgotten what it was like to wait for people. It is amazing what a battery can do and perhaps one day I’ll get the hang of it properly. Thank you everyone for your forbearance I had a lovely ride. 25 miles in perfect conditions. C.G.

Welcome back, Kevin! I enjoyed a very pleasant morning out on Tuesday with Kevin on his first ride freed from the restraints of his garage-based turbo trainer along the Greenway for coffee at Ripley and back via Starbeck. A successful ride for him, despite not being able to change up or down on the front chain ring.   James G 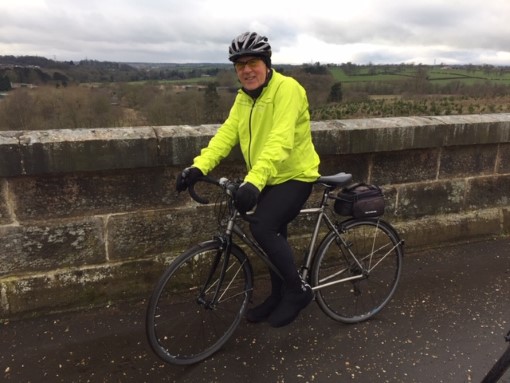 It wasn’t on the calendar, but today was the first day of Spring.  Despite only three degrees showing on the thermometer, it was sunny and warm as we gathered at Hornbeam.  Fifteen riders opted for the shorter wander.  We were able to ride the newly resurfaced Leadhall Lane – why can’t they do all of it?  On to Kirkby Overblow where we picked up Electric Paul, a lovely sunny, wind free cruise down to Linton then up Jewitt Lane where the kites were soaring on the thermals and those wearing thermals began to wish they hadn’t.  Skylarks sang, violets and celandine glowed in the verges.

Down into Bramham and the easy way into Boston Spa where the Wharfe, though full, looked less threatening, and past a host of golden daffodils as we turned for Thorp Arch and coffee.  Amazingly we were still fifteen.  We’d gained one and lost one but no major defections.  I blame the weather.  Who would want to go home?

Thorp Arch cafe was almost deserted as we arrived. No queue, quick service and the conservatory to ourselves.  Refreshed, we headed back to Wetherby on the cycleway, northwards to Little Ribston, and into Spofforth where Steve pointed out the village’s own unique Spofforth Crocus growing by the church.  Then it was the traditional way home by Follifoot, Rudding Park and the Showground Hill – at the top of which all except Steve left me.  I think there were words unspoken about electric power.  So as far as I know only two made it back!

36 miles, 2000ish feet of ascent, wonderful company and great weather.  Thanks, everyone, for making it so enjoyable.  e – Mike 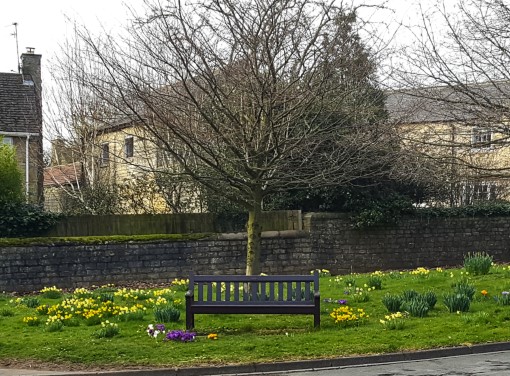 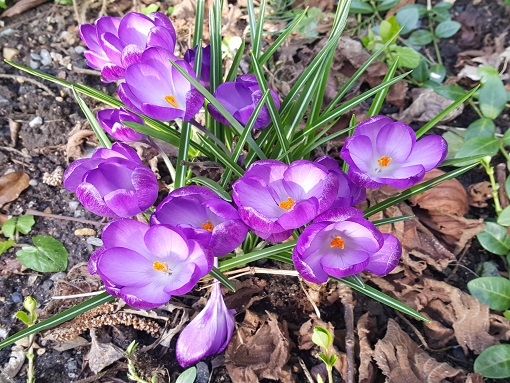 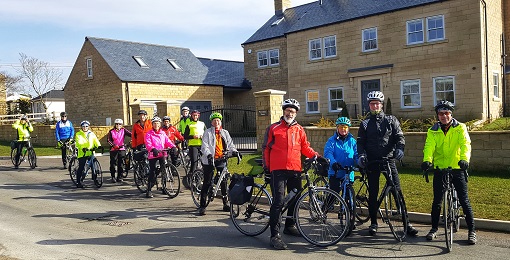 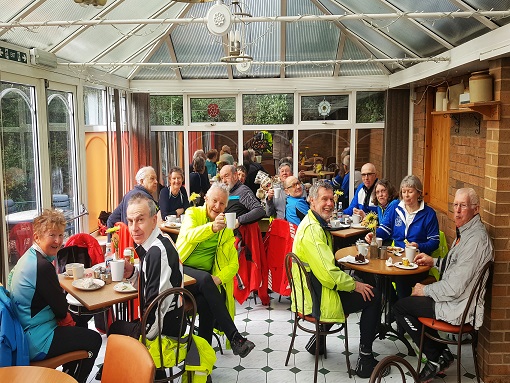 After 3 storms in as many weeks it was a relief to find it was Spring like today with some sunshine and no wind! Seven set off in my Group – we were told that the road works at the end of Leadhall Lane had finished and that the road was open. This turned out not to be the case…a white van was parked across the road and a jobsworth tried to prevent us cycling on. We took to walking on the pavement until we came across some more amenable workmen who waved us on and we were on our way along a lovely new tarmacadamed surface. At this point our Group had merged with the long-distance boys and it all got rather confused! In the process we lost Marc who didn’t follow the published route and went straight on with this other Group ignoring the turning into Brackenthwaite Lane. We stopped for a photo of the Group with Almscliffe Crag in the background and Vince’s new Trek Domane 2020 edition in the foreground. We then turned left down Merrybank Lane into Huby. This was a new route for most of us. We departed from the published route as Strait Lane was closed so we continued via Crag Lane and Woodgate Lane into Weeton. It was very pleasant not having to ride up the hill to Kirkby Overblow, instead we opted to stay along the bottom of the Lower Wharfe Valley to Netherby and Kearby. Going up Chapel Hill into Kearby we came across an elderly gentleman who gave us words of encouragement – I recognised him as Eddie Grey. For those who don’t know he was one of the most famous footballers of his era playing in the legendary Leeds Utd team of the 1960’s and 1970’s and for Scotland.

The route took us through Sicklinghall, Linton up Jewitt Lane to Bramham. It was time for another photo opportunity in front of the house I lived in between 1979 and 1986. We cycled along Low Way up to Windmill Lane for a fast descent into Clifford. The Group were getting restless by this time and wanted lunch so we opted for a change and went to Cafe Deli in Boston Spa…their sandwiches are simply delicious!

Suitably replenished we set off, after crossing the bridge to Thorp Arch my chain came off. The others were ahead of me and never heard me shout – being leaderless there was total mayhem and confusion it in the Group and it turned out that Janet went off on her own, Vince came back for me and eventually we caught up with Allen, Colette and Mike W on the edge of Wetherby. I’m glad that Janet got back safely on her own to Hornbeam about 45 mins before we did. This was a great 44 mile ride with great company and in fine conditions – what’s not to like!  Tim R 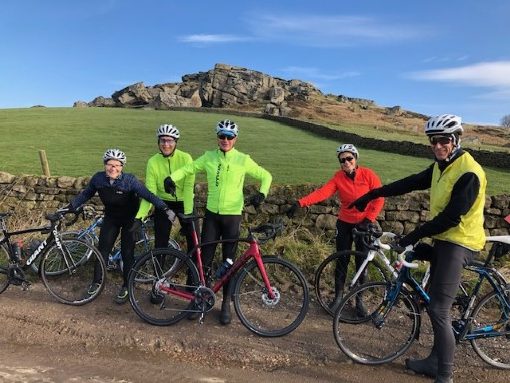 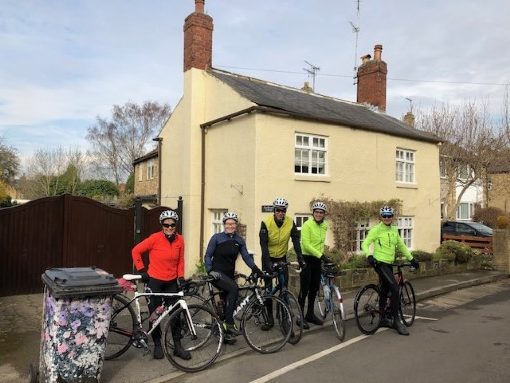 Long may the sequence of fortunate Wednesday weather continue, today was just simply glorious for our ride to Nidderdale. Starting from Hornbeam, Monica, James, Maris, Sue & Charlie were joined by Paul, Colin & myself at Ripley. Thought we would never get away as the weather was so nice all seemed content to chat & catch up with each other. Our destination was Pateley Bridge via Birstwith, with some delay for minor mechanical issue for James (& time for Charlie to soak up some rays) on to Darley, Dacre, Yorke’s Folly & Bewerley, by which time the day was feeling quite comfortably warm. Lunch was taken at Wildings where we were met by Angela with arm well on the mend & very upbeat keeping fit running, spinning etc so she looks very keen & ready to go soon. The majority returned keeping to low route through Bewerley, Glasshouses, Summerbridge & Toll Bridge but Colin & Maris opted for an irresistible run over Dallowgill Moor from Pateley. Usual great company & lovely to see Charlie after 6 weeks lay off & Angela who has been out of cycle action since Christmas. A most enjoyable ride of about 34 miles for Harrogate starters. Alan S 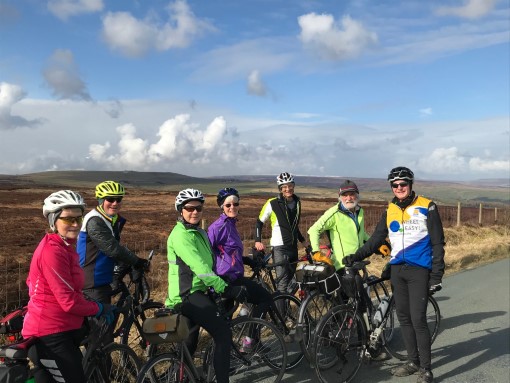 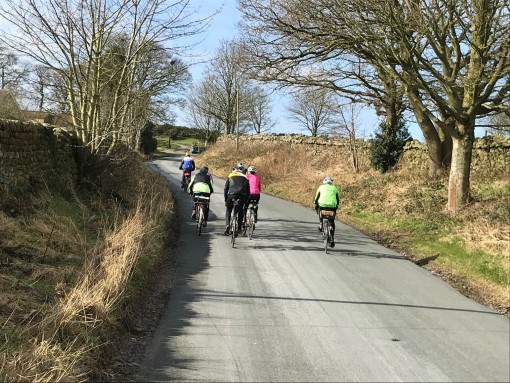 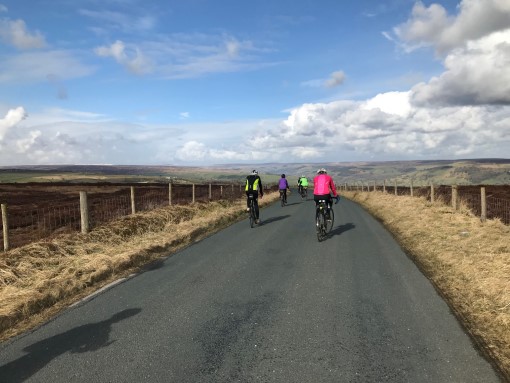 After a brief hic-cup along Leadhall Lane, nine riders quickly progressed along the Wharfe Valley via Pool to Ilkely and along to Beamsley and The Tea on the Green Café at Bolton Abbey (photo). Here was bright sunshine, improving temperatures and good food. We also picked up a 2nd Peter to join us as we travelled up past the ever impressive Barden Tower (photo). And then the climbing began as we travelled up past Skyrholme (photo) with glorious and impressive views across to Simon’s Seat (photo). Sometimes you forget just how stunning the landscape is up there. But it couldn’t last – low cloud, light rain, a chilly wind and snow in the fields greeted us as we travelled along the road to Stump Cross Caverns, Greenhow and down Duck Street Lane. The group splintered as we jived back to Harrogate with the majority heading home via Darley and Clint. 58 miles. Tall Tim 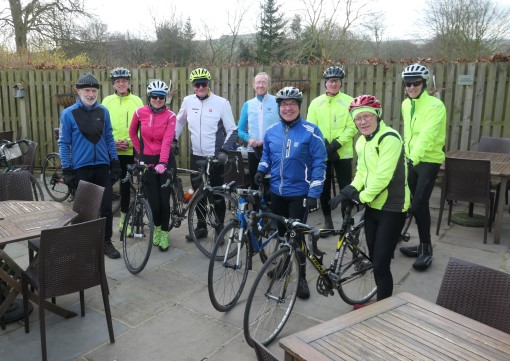 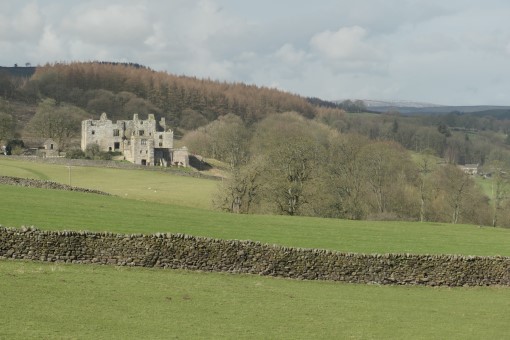 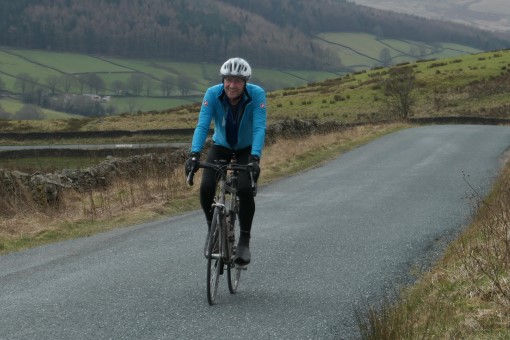 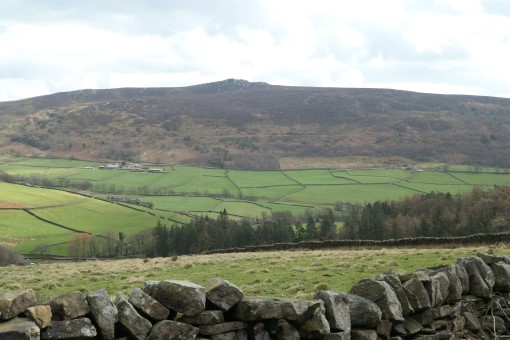 Commiserations to those riders unable to join the EGs today, like Norman and Chris, both of whom were reported as being ill (Get well soon, both of you) as the ride turned out to being the best this year so far.  Blue skies with little wind and dry roads, for a change, encouraged everyone to stretch their legs and reach out for the Lemon Tree in Tadcaster.

Team A headed in a roundabout route via Hunsingore, Cattal, Tockwith and along the B1224 where low and behold we crossed paths with the Dave Preston & Bill Whale making up Team B.  The faster lads continued through Walton & Wighill catching up the Team B once again as we entered Tadcaster, meaning we could all enjoy refreshments together.

Timing seemed to be the magic word today as arranging the next stop over at the ladies’ prison with Dave P. & Bill, notwithstanding the meandering route adopted by the “A” Team we met Dave & Bill again just as they arrived at the Café.  The weather had continued to hold, once again, albeit the “A” Team took the longer route towards home, who should we spot in the distance, as we passed through Cowthorpe, but Dave & Bill again just as Dave stopped on the bridge with a minor mechanical issue.

From hereon we stayed together until Little Ribston where Dave Peatfield & John Russell decided to turn off left for Spofforth, Dave having to continue his long way back up to Fewston as his wife had the car for the day. (He must have completed nearly 70 miles in total)  Geoff, Dave and myself continued on home to Knaresborough where Dave P. had indicated his intention to take a break before climbing up towards home near Harlow.

We’d completed a great ride covering a creditable 51 miles which for this time of year the old brigade are proud to accomplish.  Dave W.