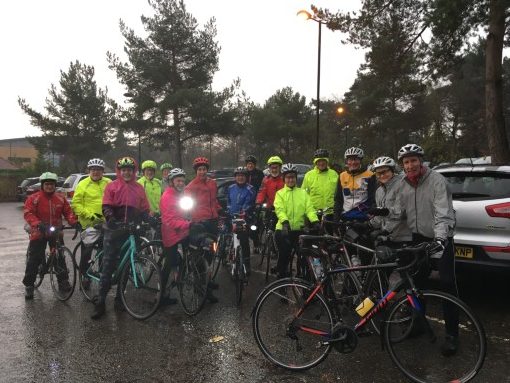 Had we not been leading, we wouldn’t have turned out today, particularly because of the Hockey Club Christmas lunch, but there were several (slightly mad?) people waiting at Hornbeam for the medium ride. To say that the weather was inclement was an understatement: very strong winds and rain, and a forecast for more of the same. We had already decided we were not going to lead a ride up Norwood Lane to Little Almscliffe into a 25mph headwind, so we opted for the Greenway and Hollybank Woods to Hampsthwaite and Sophie’s. A group of hardy locals were attempting to put up the rather tall village Christmas tree; they had not chosen a good day to do this… We were about 10 in number, including Patricia, who is relatively new to WheelEasy! and had not been to Sophie’s before. We waited for a break in the rain, and then 4 of us set off back to Harrogate up Hollins Lane, when it duly started to hail… 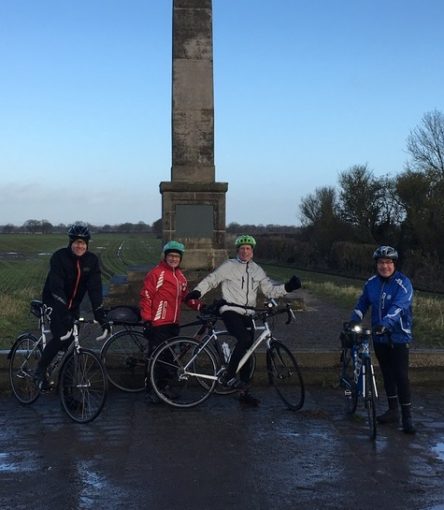 Another Wheel Easy Adventure! Who in their right minds would go out on a day like this? At least, that’s what I thought when I left home. “Just show up, there will be no-one else at Hornbeam and you can go back home and do some of those jobs which have been waiting for a day like this.”

It was windy and rainy at 9.30 at Hornbeam and the forecast was the same for the rest of the day – only the wind would get stronger. There were about 12 people at the start with several heading for Sophies.

That left 4 intrepid and very sane people who wanted to do the full medium plus ride as planned – Mike W, Chris R, Colin B and Fred. And it was my pleasure to lead them. I made the 5th rider. And we did the whole ride, all 44 miles of it.

Off we set in the pouring rain all togged up for the day ahead – the old saying “there’s no such thing as bad weather, just wrong clothes” was very appropriate for today.

The rain soon turned to sunshine for a while. Then we had blustery showers for some of the time.  At Spofforth we saw a spectacular rainbow which I was convinced was touching me – no pot of gold when I got home and checked my lottery ticket.

On we went through Cowthorpe and Long Marston. We had a photo stop at Marston Moor (note the smiles) and then on to the prison café at Askham Richard where we met John H who had been waiting a while for us. It was Fred’s first time in jail. Coffee and cakes were excellent and substantial. Then through Bilbrough, Healaugh and Wighill to Thorp Arch where Fred picked up a thorn. Mike’s expertise managed to fix the puncture fairly quickly with input from the rest of the group. The wind was getting stronger now and we were cycling into it from Wetherby, through Sicklinghall to Kirkby Overblow. Then, thank goodness, we were heading north with the wind behind us, and back to Hornbeam.

We all thoroughly enjoyed the day and we won’t be as cautious next time the forecast is so horrible. Many thanks team.  Steve W 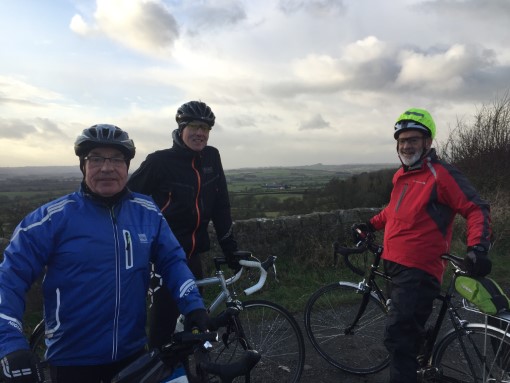