Four of us mustered at Hornbeam, ably stewarded by James. Two Mike’s (C & G), plus Dave R and myself. I wished that I’d had an extra bowl of porridge when I saw that the other three were enjoying power assisted cycling…

Anyway, after a brief and appropriately distanced chat we headed for the Greenway. It was fairly clear, and the Sunday morning dog walkers very courteous. After a clear run out through Hollybank woods and a whizz down to Birstwith we stopped briefly at Hartwith toll bridge for a wardrobe adjustment and photo op. Quite a few younger, leaner and faster cyclists passed us at the bridge..

On up Stripe Lane at varying pace. When I appeared at the top I interupted Mike C’s berry picking. We decided to look in at the kiosk in Brimham Rocks. Pretty busy, but there were plenty of picnic tables so we refreshed ourselves in comfort, again with suitable separation. Conversation centered around air rifles and pork pies. I decided to cut short and head back via Rabbit Hill.

In the end none of us could refuse the fun of the long downhill, but Mike C and Dave took a left at the end, heading for Sawley, Fountains, Ripon and Littlethorpe. Mike G and I took the right, heading home via Scarrah Bank (watch out for the potholes half way down !) . The Greenway home was busier, but again everyone was quite mindful of other users. So, a Grand Day Out indeed, and it kept dry the whole time too ! Brian N 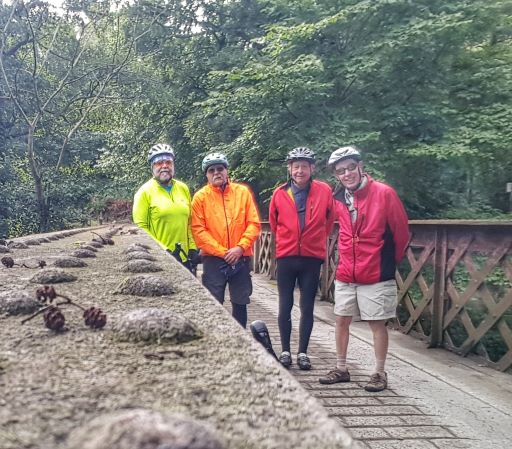 Two Daves and a Denis with a combined age of around 220 years enjoyed route 80 and were old and wise enough to miss out Sutton Bank.

A cafe stop in the garden of Rumah’s in Coxwold marked the end of the outward leg. We just caught a rain shower as we headed back towards Boroughbridge.