The weather was grey character free……a bit of wind but no rain…so all is good. Peter, Paul, Jill, Psy.Sue, Caroline and Jean…. (Jean??? it must be summer) ventured out on this the last ride for 2018. All self-lead rides today….so we decided to go up to Little Almscliff. … and round to somewhere for a chat and gossip in the warmth. This we did, heading most of the way into the wind thus ensuring we did not get too carried away with the need to cycle too far. After the slog up to Little Almscliff we were propelled down Penny Pot Lane where Peter left us to go to Asda and Paul got lost possibly, zooming after Peter, I hope you found yourself. At the cafe on the A59 we had our chosen treats served as ever happily and efficiently. They even shared their Christmas chocolates with one rather over excited rider. Psy. Sue then shot off home via Oakdale and three of us extended our ride enthusiastically via the Greenway, still pondering the question of the morning. Telegraph cryptic crossword…an anagram 8 a. …steward’s badly organising plant. 5,8. ?A?Y?/????T?A? Pete we await an answer. (The answer is Lady’s Bedstraw) Also a billion congratulations to Malcolm for getting very well-deserved medal……a knighthood should be next. CG 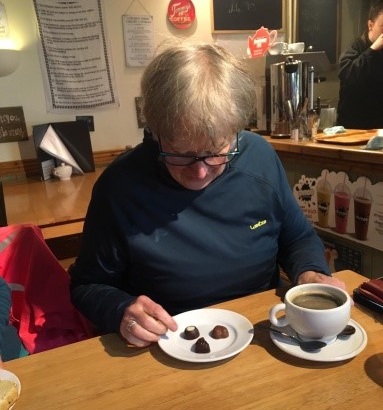 There were 11 takers for the medium ride today and surprisingly the same11 turned up at Ripley near the end despite some escaping in between! We were delighted to have Mike W back with us after a long absence and even more delighted when he managed the whole ride. There was not a leader but Alison kept us organised and enough of us knew where we were going, though we did alter the route a bit. We went to Knaresborough, Farnham, most of us got to Burton Leonard, Bishop Monkton and on to Markington and the Drovers. At this point we decided to abandon the rest of the route (we may still have been trying to escape from Jennyfield otherwise!) and headed straight down to Ripley where 4 of us bought coffees and a bit of food at the shop, joining Martin W who was there already. The only drama was a bad-tempered farmer with a sheep trailer at Markington. Most of us were happy to escape for a while and have a bit of chat. About 28 miles and thanks everyone for a good ride and company. Liz P 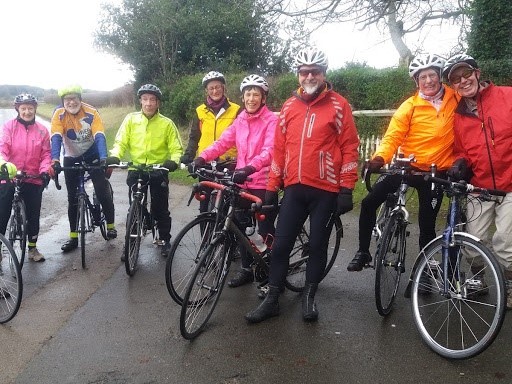 Six riders opted for the medium plus brisk group to Bilbrough, with a seventh rider joining us at Spofforth. We stopped at the Grange in Askham Brian where we had a long wait for toasted teacakes and coffee. After our refreshment pause, we continued on the route to Wetherby where the gents diverted straight to Knaresborough and the ladies detoured to Burnbridge via Sicklinghall and Kirby Overblow. 46 miles, good company and very pleasant weather. Happy New Year everyone. Julie E

Twelve of us met to ride some hills on an alternative medium plus ride and to sample the excellent cafe in Pateley Bridge, Wildings. The route to Brimham via the Greenway and Burnt Yates in decent end of December weather was improved even further by descending in to Smelthouses. From Wilsill we took the main road to Pateley to find at least a dozen bikes parked up. Moonglu Ripon were just leaving but our “long riders” had not only “stolen” our route but taken our reservation which Alan had secured! But there was room for all of us and we were pleased that they enjoyed our route and cafe who dealt really well with the influx.
We returned via Bewerley, Glasshouses and Summerbridge turning in to Dacre and following the route past Darley Mill which looks very abandoned and home via Birstwith and Hollybank Woods. 37 miles door to door and an excellent ride to end the year in surprisingly mild weather conditions. Happy New Year everyone, see you in 2019. Gia 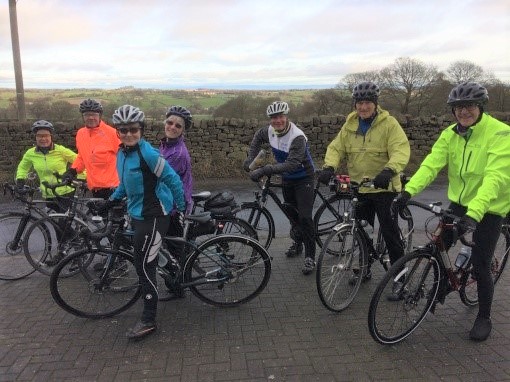 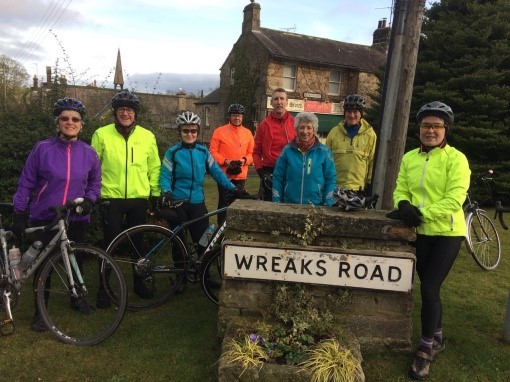 The primary destination for today’s Long Ride was Pateley Bridge. Nine riders left Harrogate using the Beckwithshaw – Penny Pot Lane exit route. It was pretty hard going along Penny Pot Lane as we cycled into a stiff westerly wind. Having negotiated the very busy A59 we made our way to Menwith Hill. The route to Pateley Bridge was via Thornthwaite, Padside, Braithwaite and Yorke’s Folly. Unfortunately, Tea Cups was closed but fortunately Wilding’s had a table reserved for eight riders. How did that happen? Coincidently while we were taking our refreshments Gia turned up with a group of riders. Now refreshed we set off for Brimham Rocks via Bewerley and Glasshouses. At Brimham Phil S left us and the rest continued to Risplith and Sawley along the main road with a strong tailwind to speed us on our way. After a brief discussion the committee agreed to go back to Harrogate via Fountains, the Deer Park, Ripon and Littlethorpe. At Bishop Monkton Martin D and Trefor headed off to Markington, Peter R decided to go to Boroughbridge, and the rest made for Knaresborough. About 50ish miles and fairly lumpy ride. PCJ 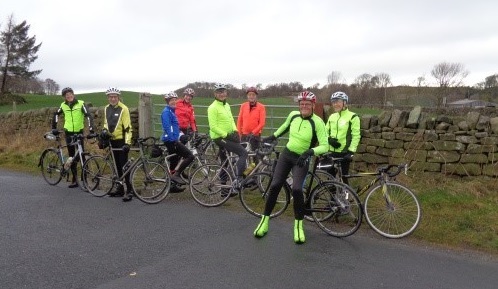