Our group of 7 headed off to Little Almscliffe for a ride to Fewston Parochial Hall returning via Hampsthwaite. It was good to see Debbie and Jean out again. Sue T decided she needed to get back so left us here. The chilly north wind really hit us going downhill towards Fewston. It was Dennis’ turn to depart at Penny Pot. The rest of us headed up to the Parochial Hall- or so we thought. Despite a sign to the Hall, we thought we knew better! It turned out we didn’t! So after a short detour we got to our coffee stop. Here Tim joined us having just had a quick spin to Askwith.  On the way back, I was suddenly surprised to see we’d acquired another rider- Sally had caught us up. We were almost back when we were caught in a shower. So, a damp end to a good morning. Thanks to all, Alison N 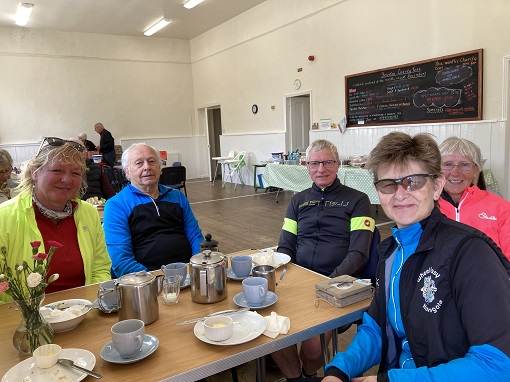 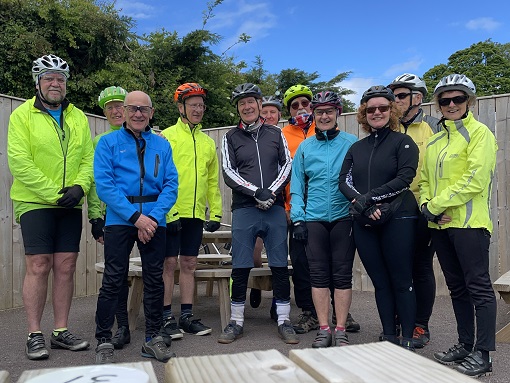 Six departed the showground for the Medium Brisk ride: Clive, Mark, Mike, Peter, Dave, and Navah. Despite Navah’s best efforts, the sextet made it intact to the other side of the Stray and onto the Greenway heading up toward Ripley. The morning was unexpectedly sunny and pleasant, and it was lovely to be out. Dave convinced the group to deviate from the mapped route and take a detour through Shaw Mills to get in some extra climbing, after which we caught up with the Medium Steady group that had surged ahead without a detour. As we approached Studley Park, the weather turned, with a bit of rain and a drop in temperature. During a cafe stop at Tate’s, where Justine from the Steady group took a photo, Peter convinced the group to deviate again and go farther east to Boroughbridge and then through Staveley, renaming the ride Navah’s Magical Mystery Tour. The rain stopped, and we set off in dryer but no warmer weather. Peter pulled off before we rejoined the route, and the remaining riders suspected he wanted the detour to get an escort home. Dave left us just before Knaresborough to see friends. The remaining four rode into Starbeck, where Navah was distracted by a driver being particularly stupid around Clive, hit a pothole, and got a flat just as the rain started up again. She phoned for vehicle assistance as the last-standing trio took the final stretch into town. If anything else happened on the ride after that point, the author is not in a position to know about it. Final tally up to flat-tire-point: 35.1 miles and 1,904 feet of climbing. -Navah L. 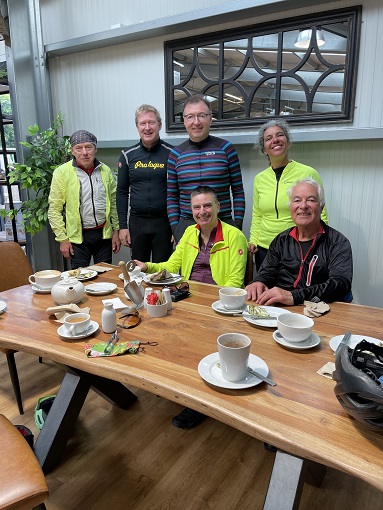 Seven riders set off towards Langbar via East Rigton and Farnley. The outbound ride was quite hilly but uneventful. On reaching Langbar everyone stopped to admire the view, a very good reason to recover from the strenuous climb. Now it was a rapid descent into Beamsley followed by the usual lumpy ride to Ilkley. Although La Stazione was busy the service was very prompt. The return to Harrogate was the usual route via Castley and Kirkby Overblow. PCJ 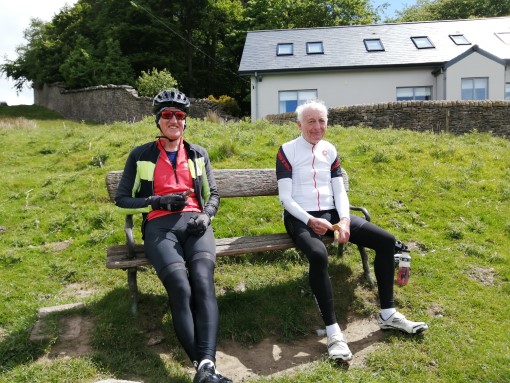 Out west on Route 47 for Jill’s Hills – not as strong as Wednesday but that north wind was rather chilly which meant it was warm in the sun when sheltered but cold otherwise. Ten out to Askwith with Tim No.1 pulling off there. Up Langbar with fabulous views and then down to Ilkley to visit Outside The Box café; well worth a visit – good staff, good food & plenty of room for riders & their bicycles. On the way back four riders (Grant, Mark, Julie & Andy) went off piste by heading home via Askwith Lane towards Timble. Dennis, Janet, Jonathan, Helen & Tall Tim pressed onto Kirkby Overblow and home. 53.5 miles. Tall Tim 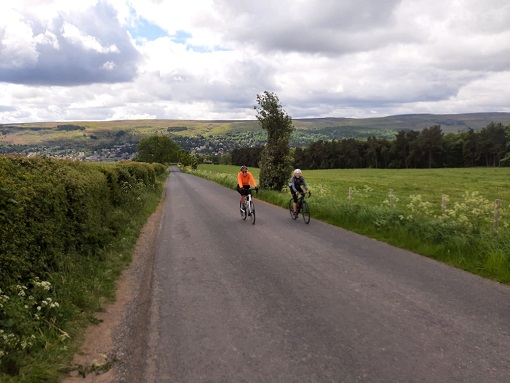 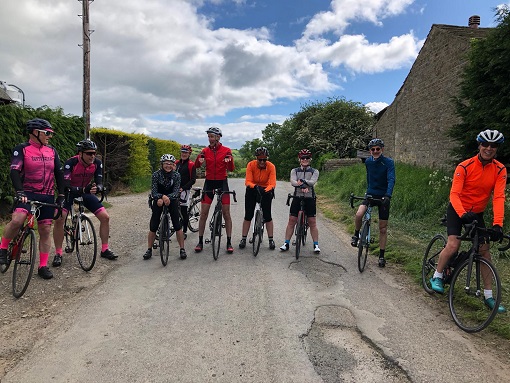