Seven of us started out from the Showground car park. We went via Rudding Lane to Follifoot, Spofforth and North Deighton. Denis left us here as he had to get back to Knaresborough. At Wetherby Sue left us to go back to Harrogate via Harland Way (the old railway line leading to Spofforth). We decided to take refreshments in Morrison’s cafe…very spacious and excellent value – a large slice of cafe and coffee for £3!

The return journey was through Sicklinghall and Kirkby Overblow where Elaine, a new member, peeled off to head home to Huby. She said she had enjoyed the ride and would definitely be joining Wheel Easy. That left Paul, Barbara, Mike and me to make the journey back to Harrogate via Walton Head Lane and Burnbridge. Perfect day for cycling – bright, sunny, no wind but very cold to start with. Approx 21 miles. Tim R 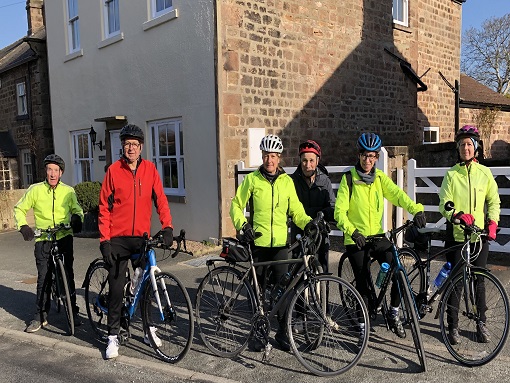 Only 7 of us today and Kevin had to return home early because of a problem with his bike. We did route107 which took us via Knox to Hampsthwaite, Clint, where Helen and Martin re-enacted a photo taken many years ago of Sue Downes cutting John Woods’ throat. (No-one was hurt on either occasion if anyone was worried!) Continuing we passed through Markington to Bishop Monkton and on to Boroughbridge for lunch. Plenty was quite busy but they managed to feed us before we headed on through Aldborough and Marton cum Grafton. After this Martin and James took a more direct route home. Helen, Mike W and I continued through Ouseburn, Whixley and Cattal then turned homeward via Washford and Spofforth. Near the Showground we found Al Davies enjoying a walk so we all had a quick catchup. A very enjoyable ride with good weather throughout, reasonably hilly, lovely views and just over 50 miles if you live on Harlow Hill! Liz P 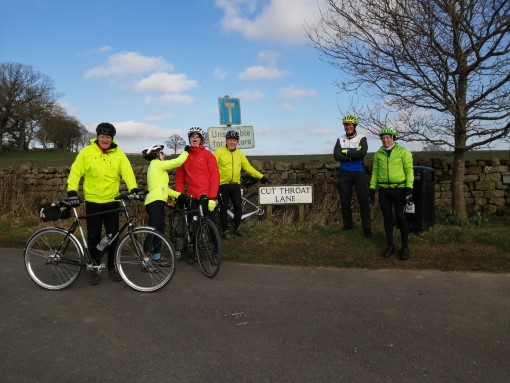 The published route today was for a reasonably flat ride out to Whixley, but there was a proposal for an alternative hilly Route 106, and given the proximity of some hilly sportives in the coming weeks, 3 of us splintered off to go via Little Almscliffe, Timble, West End and Hoodstorth to Toft Gate Café in glorious sunshine, where we saw the first spring lambs of the season. It was cold, and there was a bit of a wind, but fortunately it was behind us until after coffee (which was great – a first visit for all three of us). The descent of Greenhow was a bit sketchy with the wind and traffic. Climbing Two Stoops was not so bad except for the headwind on the last stretch to the top, but the view made up for it. 44 miles, 1330m climb, 6 lambs, one bacon sandwich and a coffee. All good. Vince 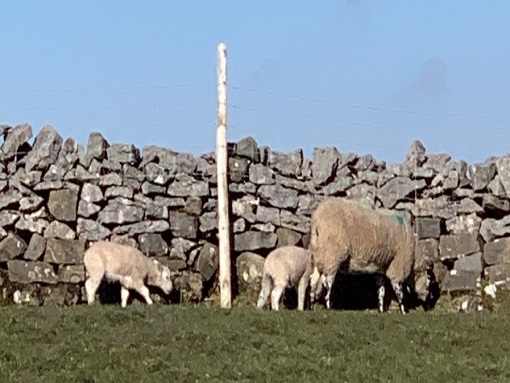 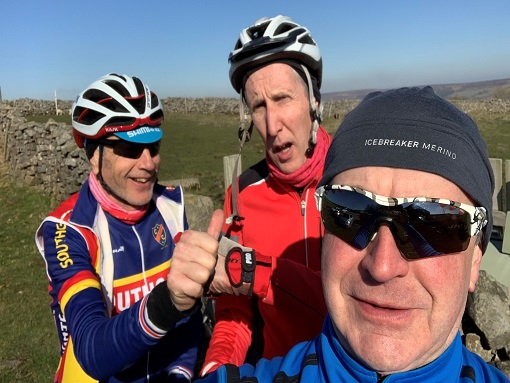 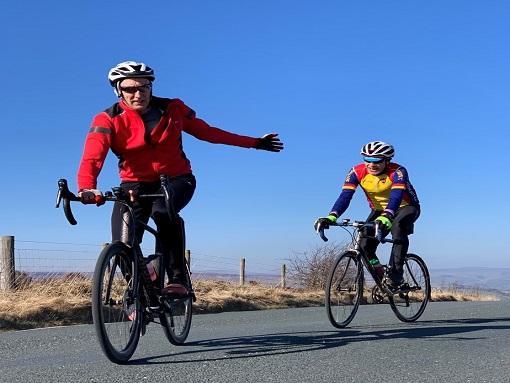 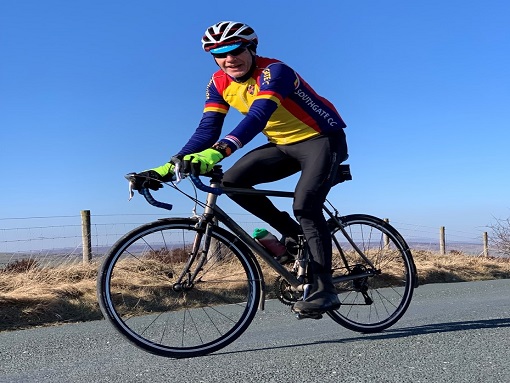 It was a cold but sunny morning that greeted the 14 riders who decided to venture to Brimham. Due to the numbers five formed a brisker group and disappeared into the west never to be seen again. The remainder departed and made good progress in an attempt to warm up but we remained cautious in case we hit any ice(thankfully none was evident). Stopping at Little Almscliffe to regroup we decided to avoid the ‘dog leg’ back lane and once over the A59 we had a very pleasant ride to Darley and Hartwith. Up Stripe Lane and into Brimham Animal Farm for refreshments . Geraldine and Joe have bought a campervan and the conversation on our table involved LPG , leisure batteries and re-cycles ,amp hours and solar panels. This was all good stuff as the other members on the table were able to give ‘advice’ and experiences. After our stop we pushed on to Brimham, Warsil, BishopThornton ,Ripley and home. It was a great ride. Good to have been out. Thanks to all. 34 miles for me. Colin B 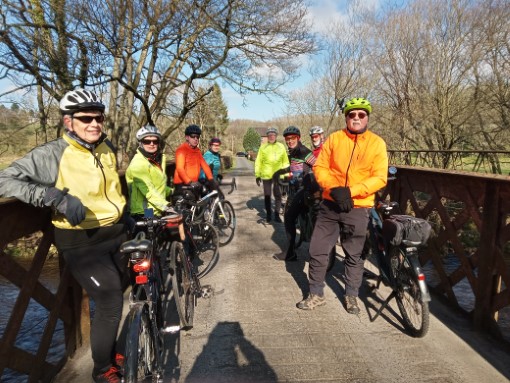 Five riders Corinne, Steve and Steve, Peter and Tim set out on Route 110 to Darley, Brimham and Warsill enjoying clear blue skies and spectacular views. The brisk pace was briefly interrupted on Sheepcote Lane by a puncher which was expertly and quickly repaired. It was not long before we were climbing Stripe Lane and freewheeling down Careless House Lane, thereafter riding home by various routes. Approximately 34 miles, averaging 12mph and climbing 2400ft. Tim2 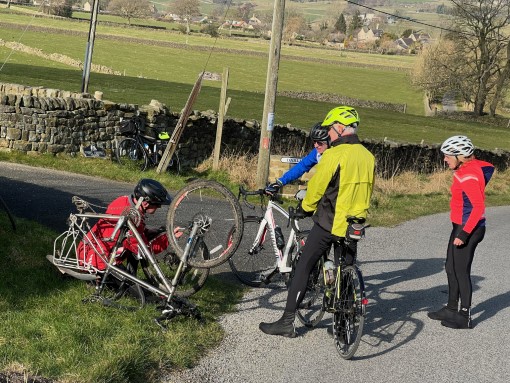