Route 219 today – out to Ilkley, on to Bolton Abbey, up to Embsay Moor, up again past Skyreholme, Stump Cross & back via Duck Street Lane – a route & a half. We split into 2 groups; in the 2nd group Martin left at Askwith; Zoë, Janet & Helen swung left into Ilkley leaving Peter & Tall Tim to carry onto Bolton Abbey. Tea & cake & then onwards towards Embsay only to find Clive, Rob, Julie & Mark O. from the 1st group coming up behind after we had stopped to admire peacocks displaying in the sun. The wind strengthened as we climbed up onto the moor and only got stronger by the time we toiled against a cross wind down Duck Street Lane. A fabulous ride with splendid views. 60 miles & only 4,900 feet (but it felt a lot more on the legs). Tall Tim 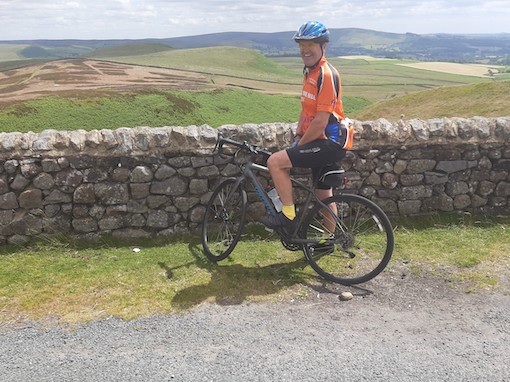 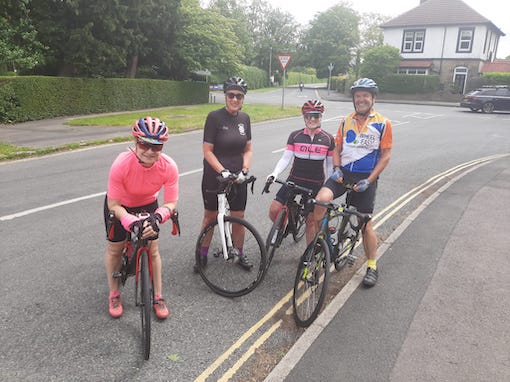 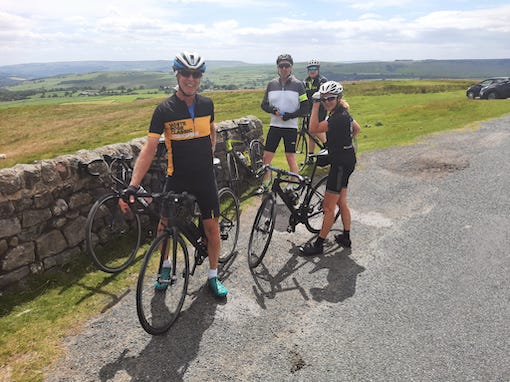 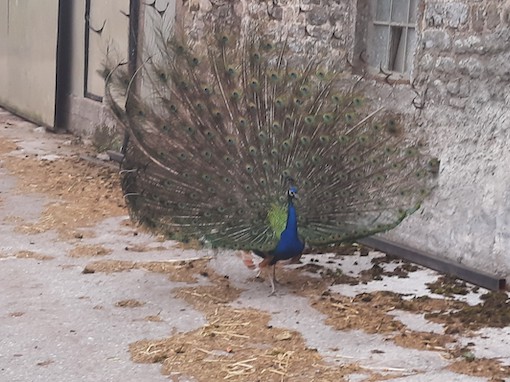 I set off with some trepidation because of the strength of the wind. Fortunately it seemed to be behind us most of the way.

This was route 239 which includes Kettlesing and Brimham Rocks. I was asked to lead the second group because I knew the route and it’s one of my favourites. There were 9 of us and we all agreed that the lunch stop would be at G&Ts – a good choice as always (see photo of a group of 8 happy people – I took the photo). That meant a detour from the route after Brimham Rocks and via the back lane into Sawley to avoid some of the main road. Helen called it a pointless loop and we agreed that’s what leisure cycling is all about.
After lunch the wind was against us but it was still good cycling although the speed along the Greenway was 20mph going out and not much more than 10 coming back.
Thank you all for the banter and thanks to Yvonne who took the scenic photos. My Garmin says we did 35.3 miles.    Steve 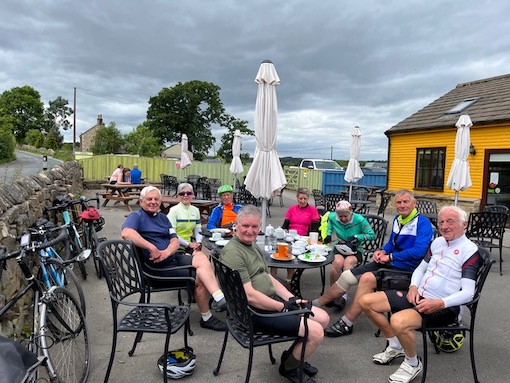 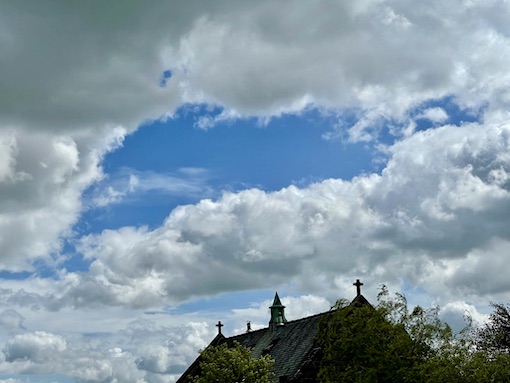 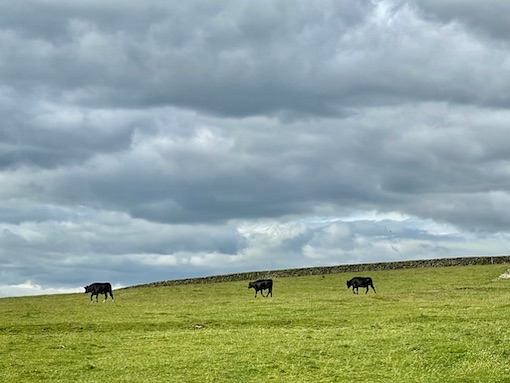 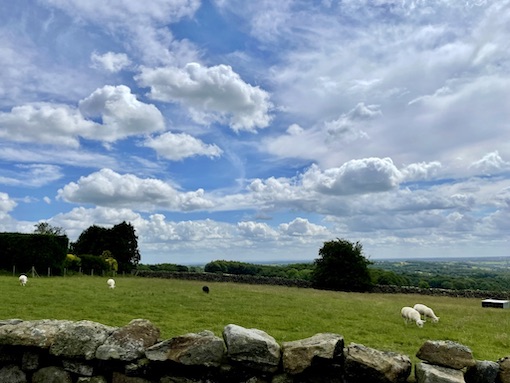 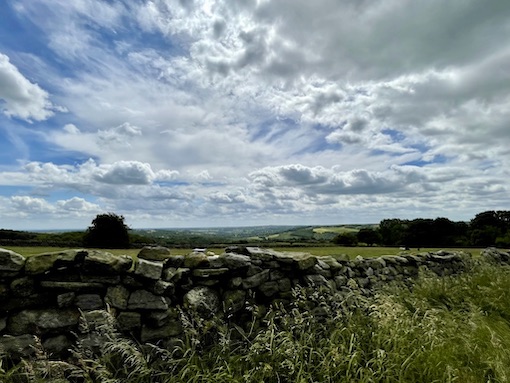 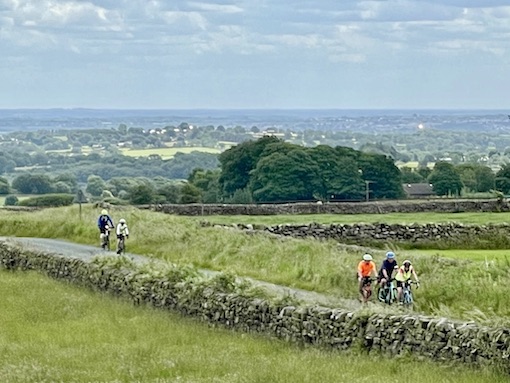 Only Paul, Diane and myself for todays ride to Wetherby. Blustery and cool conditions greeted us at the showground. Diane is a relative newcomer and Paul hadn’t been out for about four weeks. Out via Burn Bridge and the usual route to Kirby Overblow. New roads for Diane. Good progress across through Sicklinghall and into Wetherby. Bit of disruption going into Wetherby due to closed roads at the bottom of Spofforth Hill into the market place. Quick walk on the pavement resolved our issue but North Street Deli and Gourmet both shut due to staff shortages. This left the other coffee stops very busy. However we found a table outside ‘Before Anything Else’ . Good quick service. On leaving we deviated from the ‘official’ route by picking up the cycle path at the side of the A168 and then Little Ribston. As Diane and Paul live in Bilton area we decided to head for Knaresborough and the Beryl Burton Way. Waterside was taken with caution as it was very busy. Diane made it up to Old Bilton Lane. Quite rightly pleased with herself. Paul found it a little harder but then he hadn’t been out for a few weeks. They carried on to Bilton while I headed for Forest Moor. Thank you both for your company. Great ride and well done. 25 miles for me. Sorry forgot photo. Colin B

Joe was supposed to lead but was away in London so, despite my trepidation, I led with the help of Alison, the Wahoo and two able back-markers, Paul and David R. There were about 20 at the Showground so we split into two groups with Steve W leading the first group, who decided to go on from Brimham to G&Ts for coffee, rather than to the Brimham Rocks Adventure Farm. Greenway to Ripley then to Hampsthwaite and up to Kettlesing where I noticed that a new road sign for Barse Beck Lane had appeared, reinstalling the first “B”previously removed by some joker! Whizz down to Darley then along to Hartwith Toll Bridge and back up the other side of the Nidd on Stripe Lane. Coffee and cake (choice of chocolate or more chocolate) at the Adventure Farm and then on to  Brimham where  suddenly a pack of llamas being trained appeared! The sky looked threatening and the wind was even stronger so jackets were donned only to be removed when the sun came out after the long downhill to Ripley. The reduced group (two having left at the Drovers) dispersed at various points on the way back to Harrogate.       Just over 30 miles with 2,291ft of climb     Geraldine 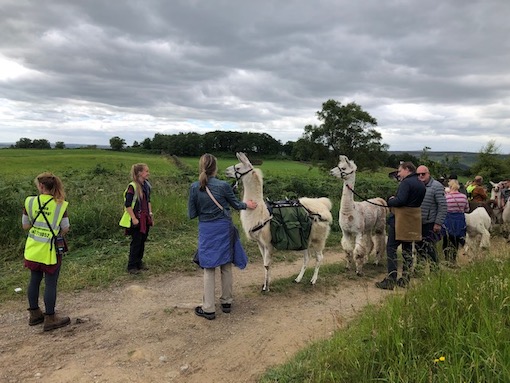 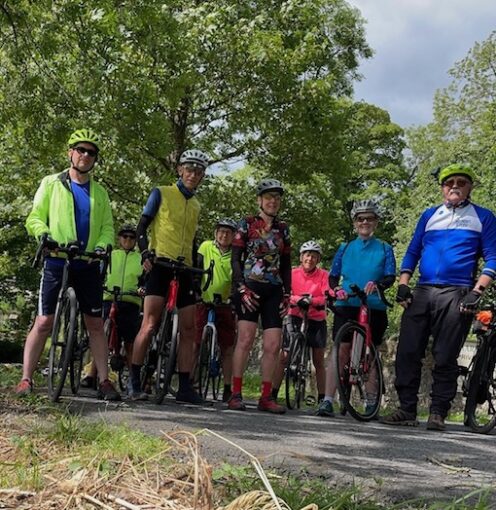