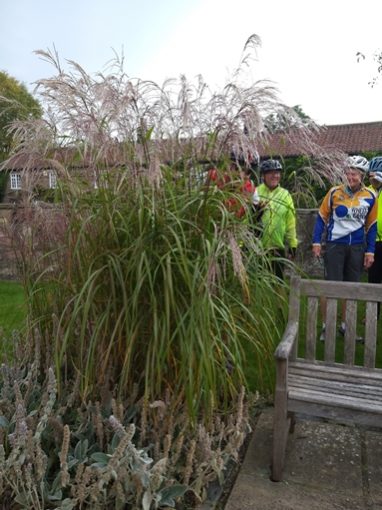 Bit thin on the ground this morning, too many other distractions on offer today.
We made a group of 7 leaving Hornbeam for the promise of fried egg sandwiches in Wetherby. We picked up Paul Blackham along the way in Follifoot and headed for Spofforth and the Harland Way. Jane left us at Spofforth, heading back to see the cycling.
Sadly the light shower that was promised turned out to be a lot heavier than expected. However, by the end of Harland Way it had stopped and we continued on to the cafe at the Shambles and egg sandwiches were partaken. I had a large cappuccino and Dave the regular, huge difference in size.
Glyn rode with us until Wetherby and headed off home to Leeds from there. Photo of Glyn hiding in the shrubbery. He had no idea he was on the short ride.
Riding back Dave and Sarah left us at Little Ribston, leaving 4 for Knaresborough. Corrine went shopping at Matalan, Paul hurried on ahead of Graham and myself there and we continued to Knaresborough hill where we were passed by the sportif riders.
A ride of around 20 miles in very good company. Thanks to everyone. Jean 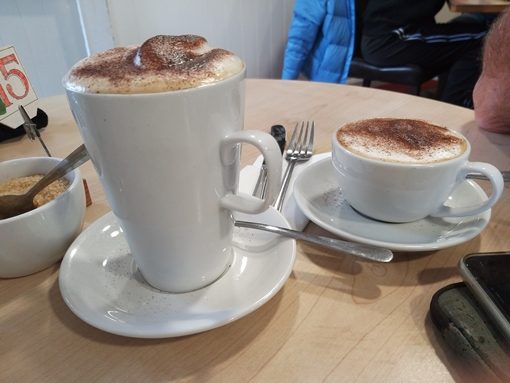 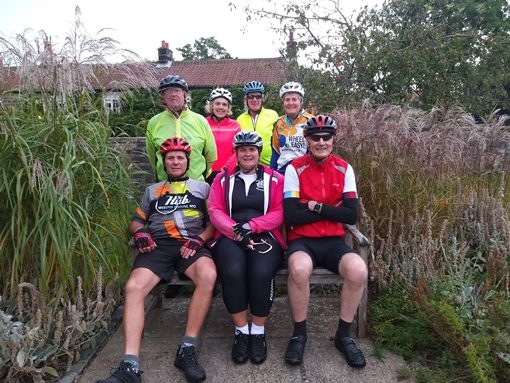 Ten people decided to have a steady ride to Boroughbridge via Bishop Monkton and Roecliffe.
Weather started dry but by the time we got to Bishop Monkton we had to stop and put wet-weather gear on, some sheltered under trees and 2 of us were in porch way of Pub until brighter and less rain.
Eventually we set off for Plenty Cafe at Boroughbridge. Had a nice dry break and coffee and chat. Then set off back to Harrogate.
30 steady miles. Thanks to all.  Mike W 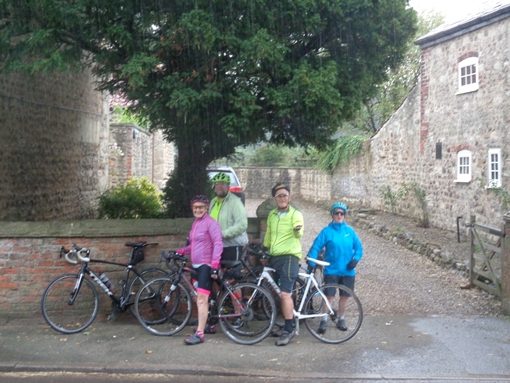 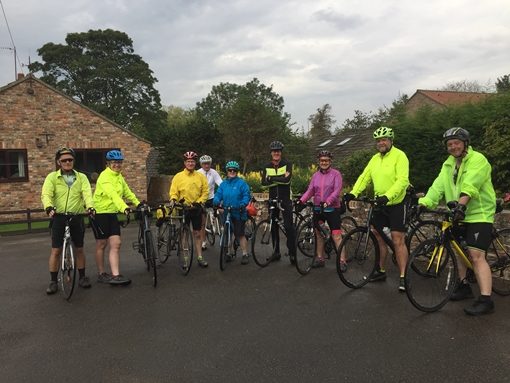 An early start to get back in time for the Team T.T. so seven set off into the sunshine
We briefly joined the sportive on closed roads which was nice then picked up Andy on Pennypot
As we headed for Duck Street the weather turned very wet Janet, Mark and Trefor deciding to abandon at this point. We carried on through monsoon conditions up Duck Street.
At Greenhow we met a sportive rider wanting the quickest route back to Harrogate as he   abandoned. After a brief discussion we changed plans and went to Tofts Barn to dry out. Fuelled by coffee and cake we blasted back down Duck Street and split to watch proper cyclists from different vantage points, mine being in front of a big telly with a cup of tea.
Thanks to all including guest rider. Daniel

Helen, hope you made it round ok and if you felt like writing a few words about it that would be nice but understand if you are too exhausted. We spoke to some of the 60 mile riders who said the course was very exhausting!

7-30 start for the 100+mile sportive leaving Harrogate today. We thought we would support our club members riding today (even those wearing Cappuccino shirts!!) We are not sure how many club members were riding in the various categories but some were spotted out during the course of the day.  Paul, Monica, Jill, Debby and I met in town at 7.15 to see them off which was great then we headed towards Brimham but at several points as riders whizzed past us, we realised we needed to change our route.

Arriving at Fountains too early for our cafe stop we circled round a bit more until it was time for a late breakfast at Oliver’s Pantry. Whilst inside it started to pour but we missed the worst of it and returned to Harrogate after almost 40 miles, mingling once more with the ride from the Drovers to Ripley.

Getting home early meant we had time to get in to town to watch the time trials and the returning riders of the Sportif.  Hope they all made it round safely, it was certainly a hard course. Gia 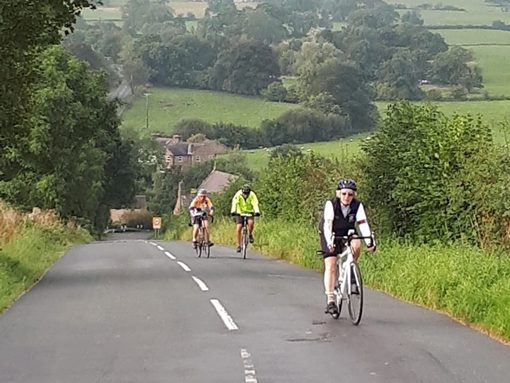 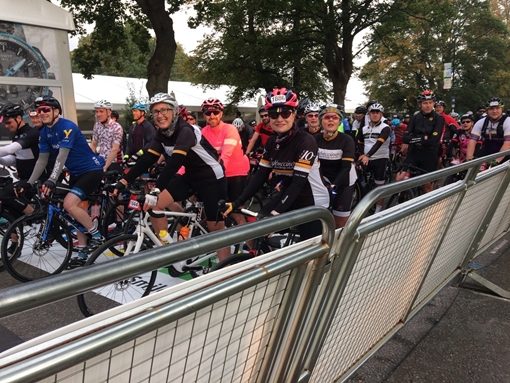 I decided I’d ride the UCI sportive instead of the usual Sunday ride. With over 3800 entrants over 3 different distances it was a great experience. I entered for the short 75km ride and I know 3 or 4 other Wheel Easy members were more ambitious but with such a large number of riders I didn’t see any of them. I rode up from Knaresborough straight to the official start which was on the finish line of the championships on West Park. Mine was a 9.15 start but some people set of on longer routes at 7. Away on time in fair weather conditions we headed for Beckwithshaw on the official race circuit. The roads were closed to traffic at this stage. Oh bliss. Down Pot Bank then right onto Cornwall Road. The climb thinned the tail of riders. Down past the Valley Gardens and across to Kent Road where we joined the ‘open’ A61 to head for Ripley. Here I was able to greet Malcolm M as I entered the village. As I left Ripley the rain was starting but I carried on. Half way up Whipley Bank it was ‘real’ rain but I wasn’t going to stop to put on rain jacket halfway up. So, by the time I got to the top I was wet. Never mind – skin is waterproof. Riding on to Summerbridge I noticed 4 or 5 riders fixing punctures but I suppose with that number of riders and the conditions …. On to Wilsill and then a right turn up Blazefield Bank. I hate that climb. Still raining over Pateley Bridge Moor to Laverton and feed station at Kirby Malzeard. Lots of riders munching through cake, pork pie, roast potatoes, energy bars and drinks, pounds of jelly babies – a real banquet and it had stopped raining. Back on the bike and I’d only gone a couple of miles and rain again which persisted all the way to the finish. However on to Grantley Risplith and Sawley towards Bishop Thornton Ripley and Knaresborough. Slog up Knaresborough Hill down Forest Lane and then to the finish at the show ground where there was a large crowd to great us. Great ride even though wet through. I felt it was really well organised, plenty of marshals and first-rate signage. Motorists were very good and tolerant considering the huge numbers. About 3100 ft of climbs and home for 14.20 to watch the mixed time-trials. My thanks to Liz P for the loan of a Wheel Easy shirt to enable me to fly the flag. Colin B