Another excellent day for a bike ride…. a small but perfectly formed group of 6 skirted round Harrogate, set off for Bishop Monkton via Farnham and Copgrove. We headed speedily to Markington and Ripley, where four people went to be refuelled and plan a further loop and two went off to get on with Sunday. Thank you, Paul, for your quiet unobtrusive back marking. 22 gentle miles. CG 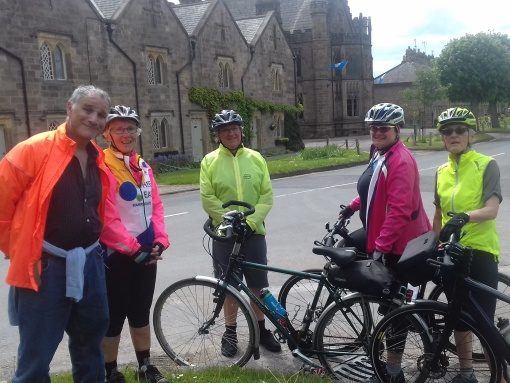 The unexpectedly warm dry weather brought out a bumper crop of 16 riders for the medium ride out to Myton On Swale. With so many takers (nice to see some new riders and guests) we split into two groups and Mike kindly led his group off bound for Knaresborough Low Bridge. From there we wended our way out to Arkendale and Gt. Ouseburn and then followed the left, left and left again route through Flawith (me neither) and over the Aldwark toll bridge. After some poor navigational decisions on my part we did make it to the battle site at Myton On Swale and paused for the group photo before heading on (more lefts) to Boroughbridge for a stop at Plenty which was decidedly busy and led to some dining ‘al fresco’ in the square. After a familiar route back, we regrouped at Sandy Bank and like a star burst headed off to Farnham, Knaresborough Hill, Beryl Burton and all points. Around about 42 miles all told. Thanks all for a splendid day out. Dave Marson (aka ‘Big Dave’). 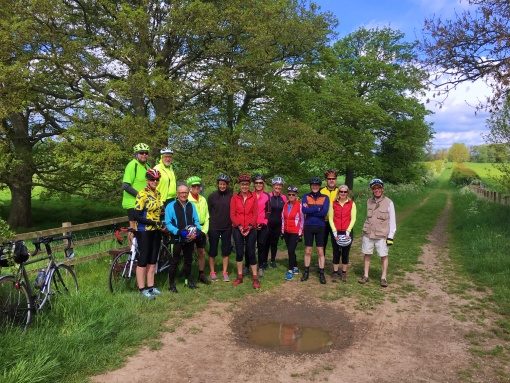 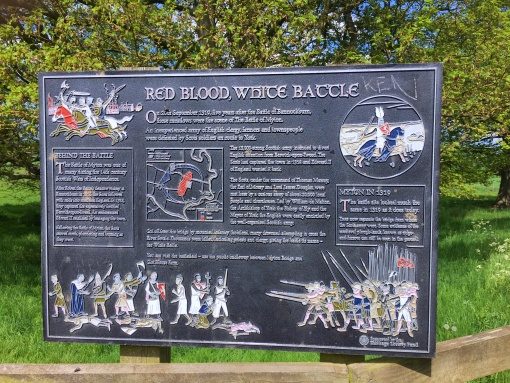 We set off with a select group of six – two Steve’s, Monica, Kevin and Debbie and myself. Numbers were low which we put down to folk being put off by the name of the ride “Jill’s Hills” but all agreed that the hills weren’t in fact that bad. We followed route 47 on this web site going up Brackenthwaite Lane and into North Rigton where the first photo stop was taken. Lovely views over lower Wharfedale as we passed Almscliffe Crag. Through Stainburn stopping for the second photo shot in Leathley before Debbie left us to make her own way to join her family in Bramhope. The five of us now continued along the back roads towards Ilkley before turning right to Middleton and up the hill to Langbar. Compared to last Wednesday’s Away Day which took in Fleet Moss and Kidstones, this hill seemed comparatively easy! At the top we met a group of cyclists from Garforth one of whom kindly took a group photo of us.
The top of Langbar was magnificent with fine views everywhere and curlews and peewits in abundance.  Hunger drove us on to our lunch stop at La Stazione in Ilkley where we all had coffees of various descriptions and toasted panini or hot focaccia tasty stuff.
Our return journey took us through Wharfe Meadows Park in Otley, across the footbridge onto Mill Lane and then onto the main Pool – Otley road. Steve Wright showed us all a lovely back road at Knotford Nook which got us off the main road for a few minutes. This was the Old Pool Road and took us past the entrance of Otley Sewage Treatment works and between the two lagoons/ponds (ex-gravel pits) where there’s a fish farm.  Our route back was through Castley, Weeton and Kirkby Overblow where the group divided to make their own ways home. 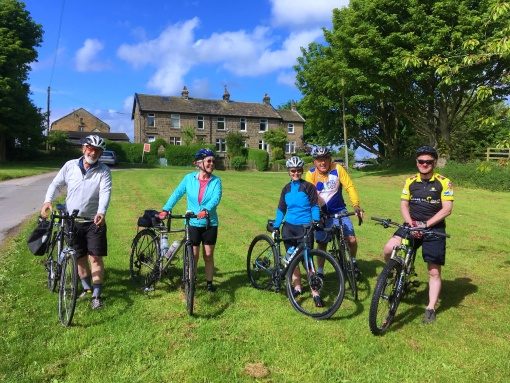 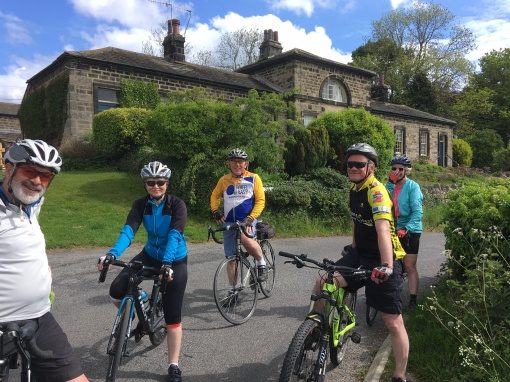 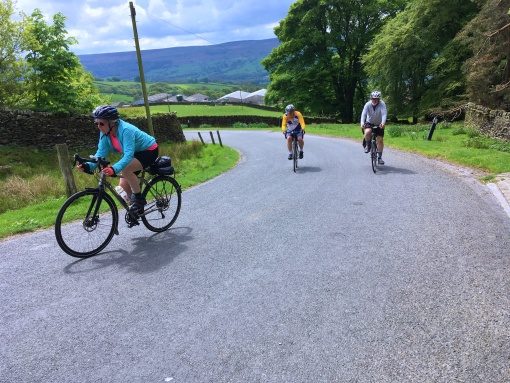 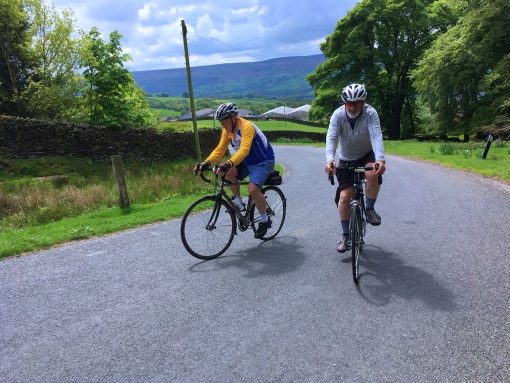 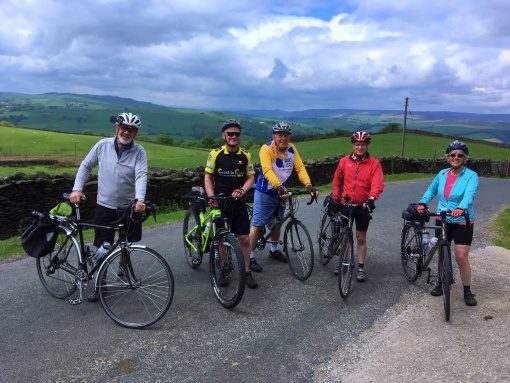 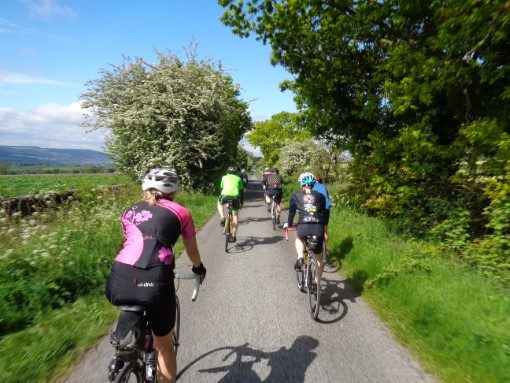 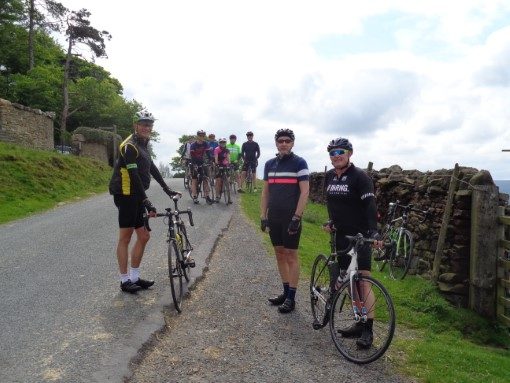 Surprisingly, there was only three of us, or was it four, for the long ride to Hutton-le-Hole today. Myself, Glynn and Chris set off in very good cycling conditions, and had a very uneventful ride to the lunch stop at H le H, covering the 50 miles at just over 12mph. Following lunch we climbed up to Gilamoor for the obligatory photo at the fantastic viewpoint over the dale. It was here that I saw a message from Eric saying that, due to a continuing wheel problem, he had set off late, and was wondering where we were. I had to confess that I had reversed the route and that somehow our paths had crossed in H le H without us seeing each other. Apologies Eric.
The return was as uneventful as the outward journey and due to the strange windless conditions our average speed was still the same. So, we had a relaxed, enjoyable, 98 mile ride through attractive scenery, and nothing much happened. It seems Eric did the same thing in the other direction, only he went a bit faster than us. Phil S 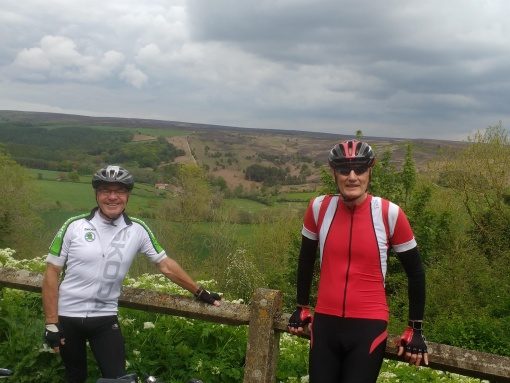 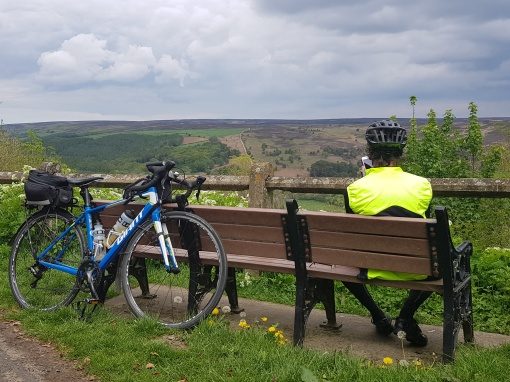