Six people opted for the short ride (Paul, Sue, Tim, Sylvia, Denis and Colette). Sue offered to back mark and we set off to Wetherby via Knaresborough. We said goodbye to Sue at Kirk Deighton, as she had a lunch date to get ready for. We then carried on to Wetherby where Denis peeled off to get home for his Sunday Roast, leaving four to search for a suitable coffee stop. North Deli was closed so we opted to sit outside at a café in The Shambles.

We made our way home via the cycle path to Spofforth with much reminiscing about old TV advert jingles (prompted by Paul’s t-shirt featuring the ‘Smash’ aliens). As we turned off Rudding Road towards the Show Ground we were stopped by a car behind sounding its horn. It was Sue! – now transformed and on her way to the Traveller’s Rest for lunch.

Final celebrations as Paul made it up the dreaded Showground Hill without stopping for the first time. Thank you all for a fun ride. Colette 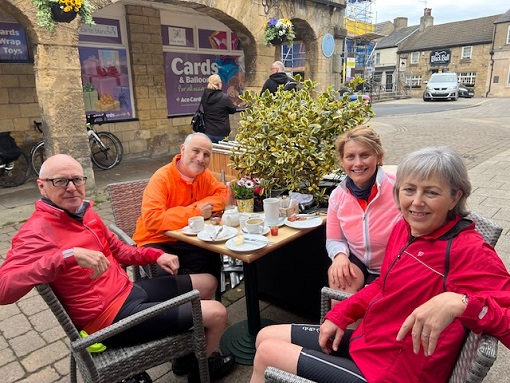 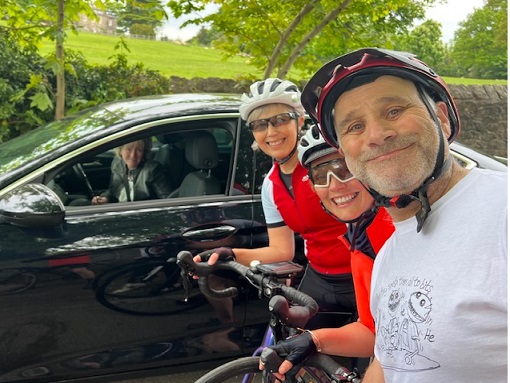 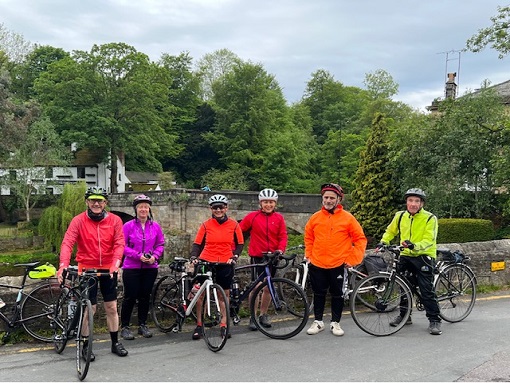 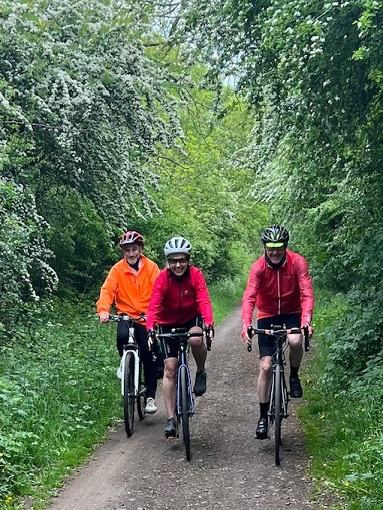 Seven riders left the Show ground heading towards Low Bridge at Knaresborough. Due to mechanicals and traffic signals the group was reduced to four, namely David, Connor and The Jacksons. The ride out to Boroughbridge was uneventful, including the helpful contractors at Chain Lane who allowed us to walk through the works. The next problem to overcome was where to eat in Boroughbridge. Fortunately we managed to get a table at Plenty, followed soon by Joe and Geraldine’s group. On the return leg via Ripon it was decided to go off piste and return to Harrogate via Markington, Drovers’ Cross roads and Ripley. PCJ

There were originally 15 of us at the Showground for the medium steady ride on a sunny day with an easterly wind. We split into 2 groups, with Peter Jackson leading 7 in a sub-group, and they set off along Hookstone Road, whilst 8 of us in our sub-group went through the showground to Sainsbury’s and across Wetherby Road. Corinne was waiting for us at Low Bridge, and we got through the road works in Knaresborough and on to Farnham, Occaney and Copgrove. Along the bridleway towards Roecliffe and in to Boroughbridge. We came across a sub-sub-group of three as we entered Boroughbridge, but I’m not sure how they got there. Coffee and cake outside the back of Plenty, where we saw a lot of swifts (which is apparently quite rare these days). Over the bridge and on to Skelton towards Ripon, where it was race day, so there was a lot of traffic going over the Ure bridge. We crossed the canal and proceeded towards Littlethorpe and Bishop Monkton. Paul and Brian decided to go back via the Mountgarret Estate, while the remainder continued towards Occaney and Farnham and Lingerfield. We passed a ‘Glawning’(look it up) mini-festival on the way to Old Scriven and got a bit dispersed in Knaresborough, with James and Colin leaving us, and Corinne taking the Beryl Burton back home. Paul and Brian apparently managed to lose each other (quite an achievement when there are only two of you, and you both know the route well…), but I’m fairly sure they made it home safely.   About 36 miles. GB 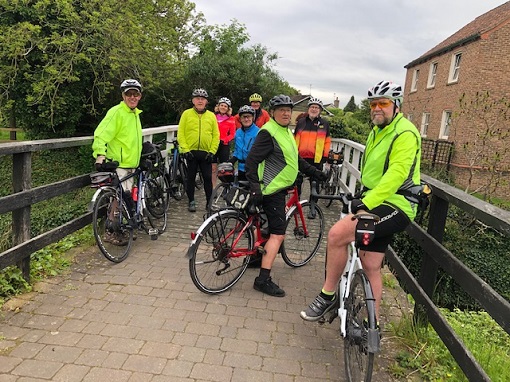 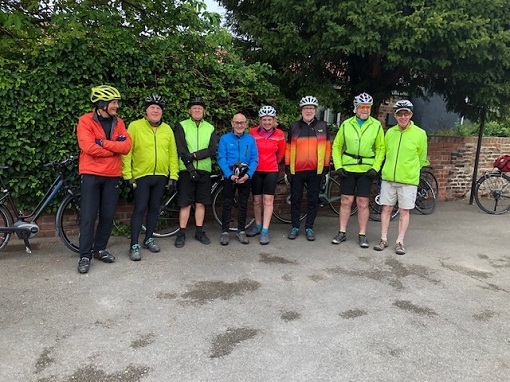 There were 8 takers for the Medium Plus Brisk self led ride to Pateley/ Ripon including the steep Silver Hill climb. We followed the published route through Hampsthwaite onto Kettlesing bottom and over the A59 onto Pennypot Lane. We decided not to loop down to Cobby Syke but turned right to go past Menwith Hill. Here we passed the Steve Bungay ‘led ride’ who must have gone the quick way. As we made our way towards Duck Street we encountered a road race- going in the other direction (thankfully)Helen and I decided that Silver Hill was not ‘on the menu’ today so we looped around and met the others at the top of Church Hill. Apparently Silver Hill is steep! Once Devil’s elbow was out of the way it was a lovely swoop down to Ripon and Tate’s which was busy, busy. We were there so long I got to the point of wanting someone to ‘beam me up Scotty’. Up through the Deer park, missing out Markington etc. we favoured Watergate Lane, Scarah Bank and the Greenway home. Thanks to Vince, Denis, Richard, Mark, Zoe, Katharine and Helen who is absent from the photo as she was nursing a poorly bike. 50 miles, a few hills and no rain. Janet G 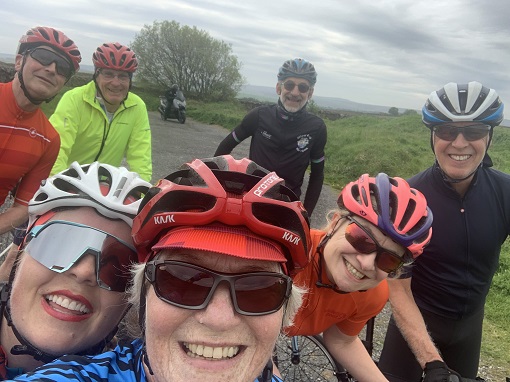