Nine of us chose the short ride to Hampsthwaite via Kettlesing. Good to welcome Lucinda and Tracey to the ride and to witness Rocket Dennis powering up those hills.

Nice relaxed ride suiting everyone who wanted a shorter ride for various reasons although sitting at Sophie’s no-one was in a hurry to get home! 24 miles. Gia M 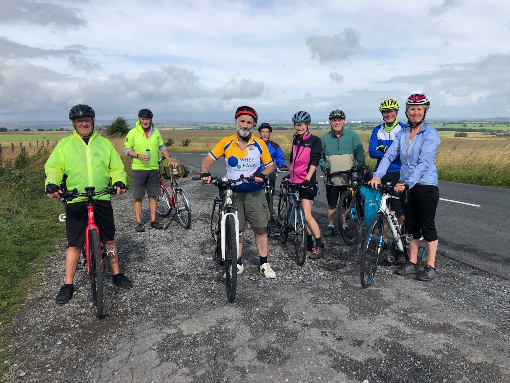 After early morning rain, Sue, Sarah, Fiona and Mike set off from Tadcaster in promising weather at 10am, heading out via Bolton Percy, Acaster Malbis and Copmanthorpe for an early lunch at the Grange Coffee Shop in Askham Richard.  Excellent and good value fare was enjoyed before completing our 22 mile round back to Tadcaster.

This was the second of two short awaydays on the ride calendar and the consensus was that we should arrange at least one more this year, possibly in October.  Details will be provided on the calendar in due course.   Mike W 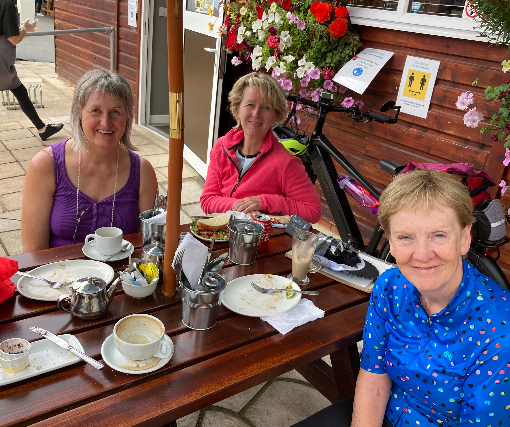 It has been so lovely to be back doing normal Wheel Easy things and it was another busy morning for the Medium riders.  We were Group two of three, consisting of Liz F, Debbie H. Mike W, Colin and Stuart.  Stuart is quite new to Wheel Easy having moved here from Beverley and is a man of many useful and interesting talents.  These include Bee Keeping and he is currently looking for somewhere to place his hives.  If anyone lives amongst, or near, a lot of flowers and would like to give house room to some well behaved, industrious bees, Stuart is your man!

We are all trying to learn the “Snicket Route” out to the Greenway and Liz was the only one professing to know it so, we let her get to the front, where she stayed, rocketing along until we got to the Drovers crossroads.  We found Peter B at the end of the Greenway and it was great to have a good chat and pick up where we left off 18 months ago.

It was a fine route, through Bishop Monkton, Littlethorpe and through the delightful village of Copt Hewick en route to Boroughbridge for a snack.  We stopped at what used to be Listers which was very good, if with painfully slow service.  A note of caution:  Don’t try the “Cruffins” (a melange of a croissant and a muffin!).  They have all the appearance and texture of a wasp’s nest and don’t seem to taste much better either, judging by the expressions on the faces of those who ordered them.

A pleasant, fairly brisk route back home via Minskip, Staveley and Knaresborough brought a wonderful day to an end.  No rain, sunshine all the way and plenty of laughter and banter.  Same again please!  Helen T 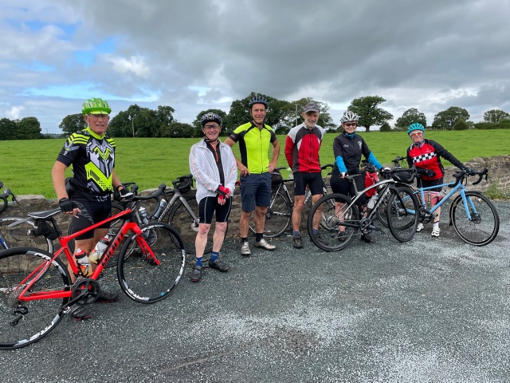 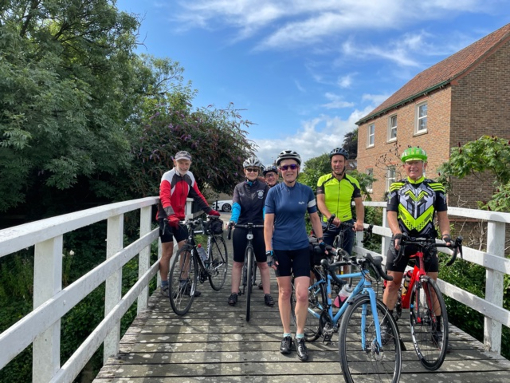 First time leading a Wheel Easy group for a long time and not too difficult on a pleasant route in the company of Liz P, Joe and Geraldine, Chris, Brian and, for part of the ride, Corrine.

The delight of this route is, I think, the Main Street through Copt Hewick, past the Village Hall with it’s tower and it’s most attractive church on the corner of the village green – where the photograph was taken.

We enjoyed our lunch at Chez Nous in Boroughbridge before the return to Knaresborough and Harrogate which was interrupted by being passed by the hooligans in Group 2!  Keith T 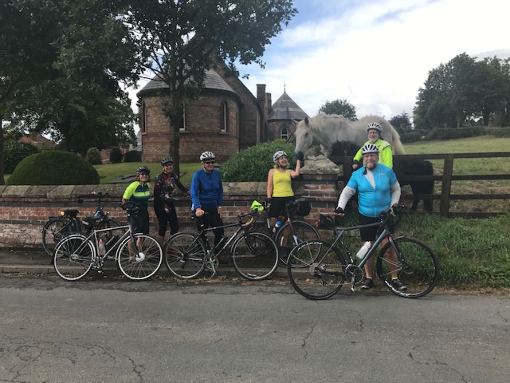 Route 123 to Masham today in somewhat chilly weather conditions for August. Still the rain had stopped before we all set off & stayed away all day except for some odd drops as we came down Fountains Lane (a change to the published route). Masham was a busy as normal – it really does need an extra café I would say but nice to see so many cyclists out including a good many on a sportive. A round journey of 60 miles completed by Helen, Janet, Yvonne, Andy A, Andy H, Richard, Tim R & Tall Tim. Full marks to Andy H for keeping up despite having a touring bike that weighs as much as the collective weight of the bikes of the other seven riders. Tall Tim 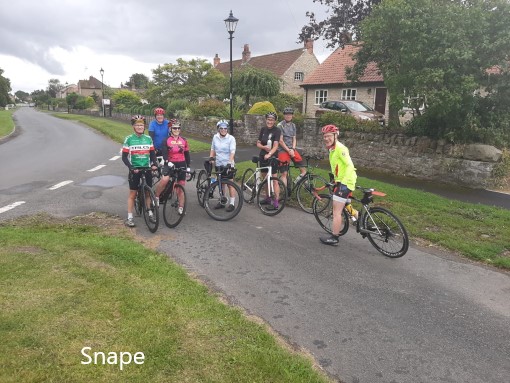 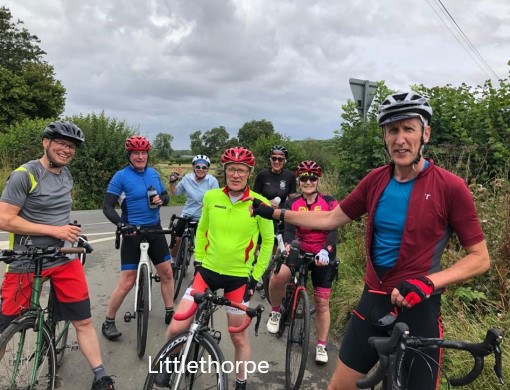