On a warm blustery morning Fourteen cyclist turned up at the Squash Club and all decided to come on my ride. We set off in groups of five to Low Bridge where we picked up Alan Brisk.  We rode on to Great Ouseburn for a photo session then on to Aldborough where Dennis left us. Thanks Dennis enjoyed your company. The next stop coffee stop at Plenty in Boroughbridge was a favourite for the majority few choose bakery. We had good chat and scones, rocky road and flap jacks. Three decided to cycle back Minskip way. On to Ripon with a head wind, crossed the canal where the vote to go through Markington to Ripley Greenway, was passed Thanks to all for good company and input 43 miles well done to all Mike W. 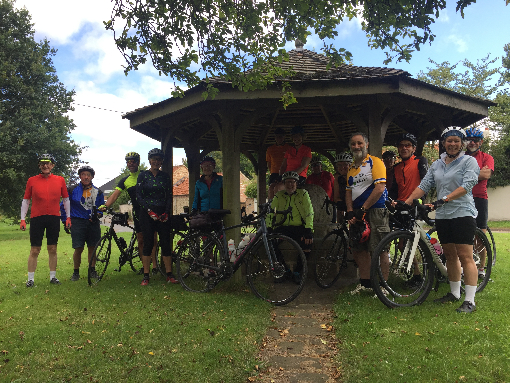 Assembling in the ‘Viking Car Park’ at Stamford Bridge it became clear that no one had read (tall) Tim’s instructions ‘no swords, shields or helmets’. After some discussion we compromised on the latter, although we never did get to see what Mike was carrying in his saddle bag.  Just three Tims in attendance for this Away Day accompanied by one each of Julie, Helen, Janet, Mark and Mike.  Lots of lovely equipment on display including Helen’s shiny new wide-range cassette. She said she was keen to try it out on a few extra hills if the opportunity arose.  We said we would see what we could do.

The 52 mile route quickly took us up to 235m and for some of us, down again…  And then up.  Equanimity restored, we coasted through Thixendale (no hobbits visible today), and onto Fimber and Sledmere where basking in a hot sun we scoffed tea and scones.  More small lanes and big Yorkshire views took us to Malton for lunch in the market square at the excellent Malton Relish The route out of Malton ushered us around the Castle Howard Estate with fine views of the house and grounds from across the lake.  Through a couple of arches, past an obelisk or two and we were unceremoniously tossed out onto the A64 (cycle path) but only briefly, before an gentle spin back through quiet back roads to the start. 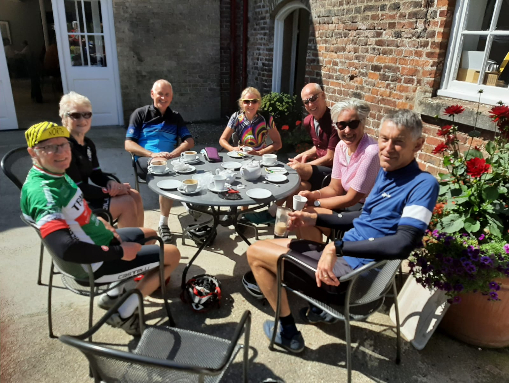 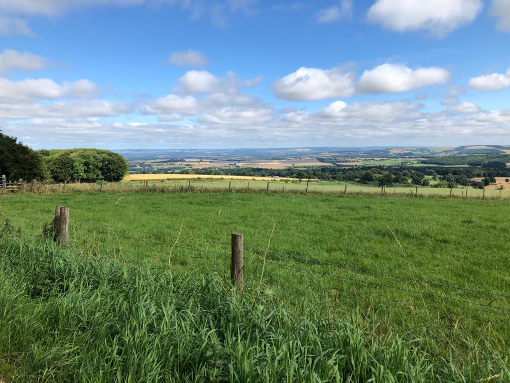 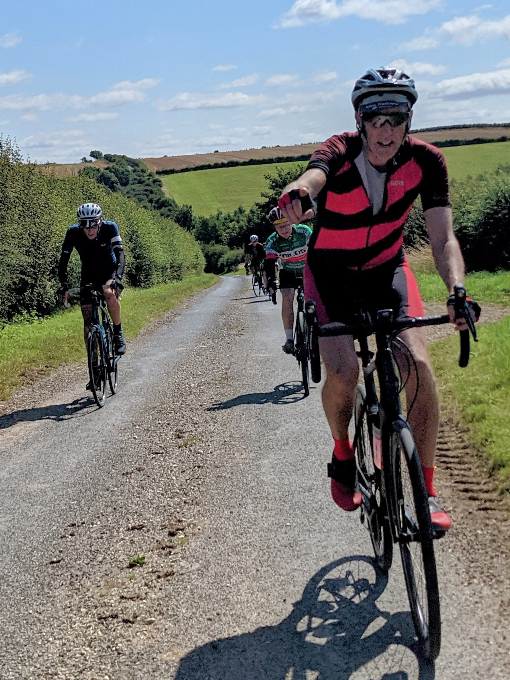 Eleven riders assembled in the Car Park under cloudy skies for todays adventures on the Moors, Some had been on the original ride in 2017 and were looking forward to seeing the heather whilst others were facing the hills for the first time. They were not disappointed as we began to climb immediately and the group quickly strung out. This was the way the day went on the first half of the ride as we hit the Moors and the sun came out and we were rewarded with fantastic views of the vallleys and the heather.

On the advice of our church expert( Keith) we stopped to visit St Gregorys Church Bransdale which was well worth the break for the view form the bench outside alone!

We pushed on the Hetton -le -Hole and a well earned lunch.The Forge cafe were brilliant with quick service and good food.We compared notes with the early group as they were setting off and prepared for a “flatter” secon half of the ride. This didnt seem to work out as we immediately began climbing again( cafe legs and all) which was a struggle after a good lunch! We reached Lastingham and again on Keith recommendation visited the Church with its crypt which was well worth the stop.

The ride did flatten out as we made our way back and we enjoyed a steady ride through the countryside.We stopped at Harome and thought about calling in for tea – but decided we were more Schwalbe crew that Michelin!

We arrived back at Helmsley after a great ride and the weather meant we saw the Moors at its best. Thanks to Richard for a great route and leading the ride and to debut leader Michael for leading us -and gettign the same number back who set off! Another good day in great company 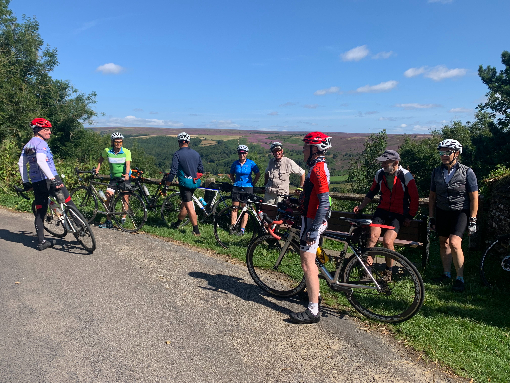 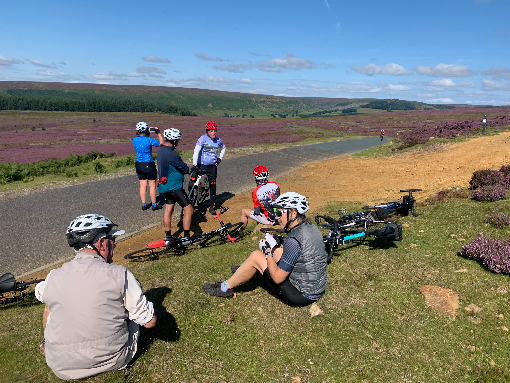 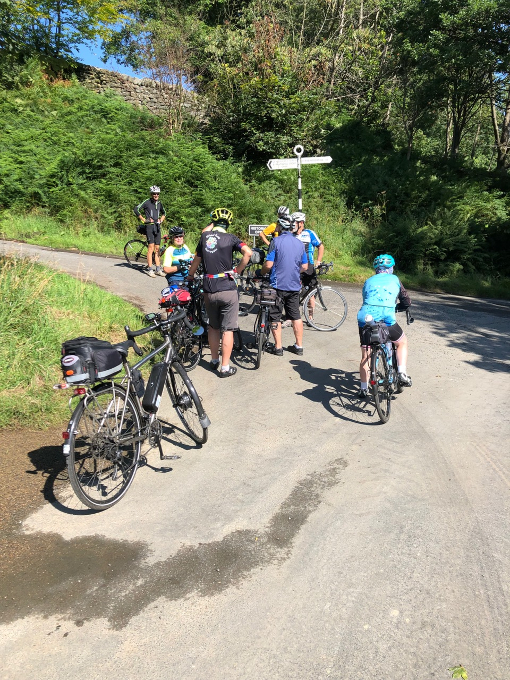 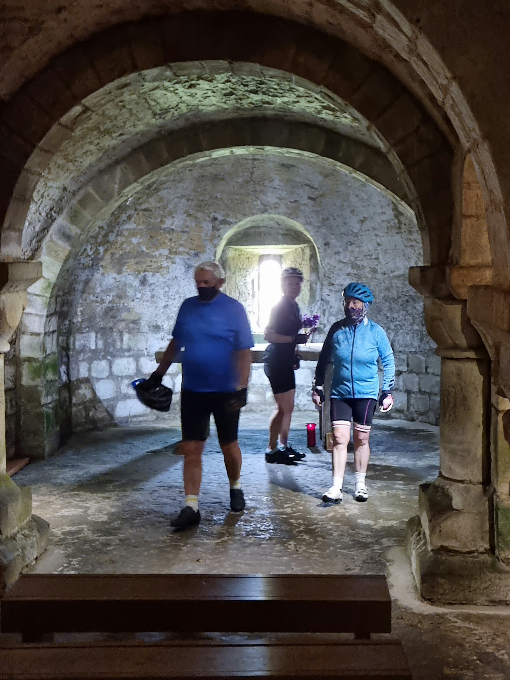 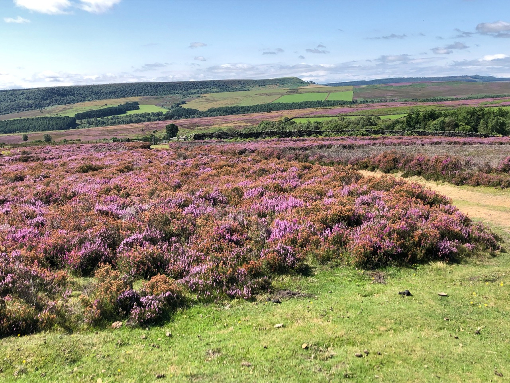 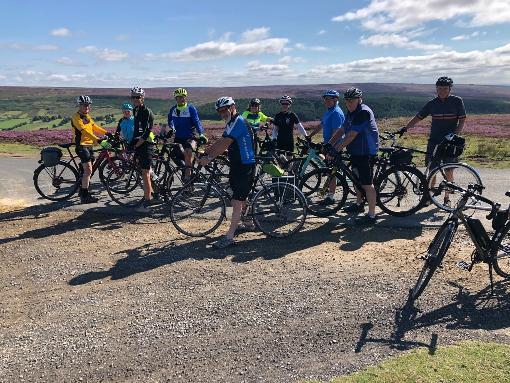 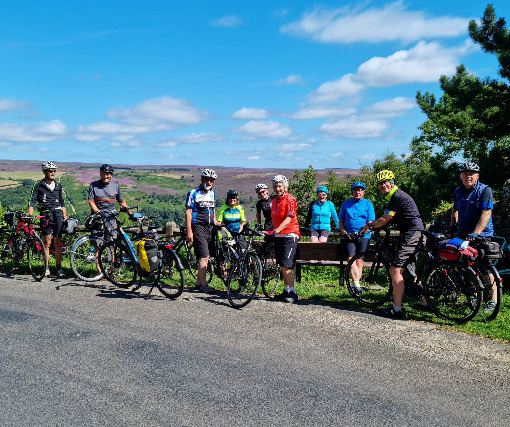