Eight set out from the showgrounds for the Medium Brisk(ish) ride on Sunday, 12 June, 2022: Debbie (aka Rachel), Steve (aka Mark), Chris (aka Tim), Tim (aka… Tim), Stephen, Sarah, and Clive. Wait, that’s only seven. Oh, and Navah. That’s eight. It was a surprisingly nice morning, and once we caught the tailwind around Kearby, the going was easy. There was a little left-versus-right action, and some discussion of a detour which was quashed, but for the most part the octet did well together. Then we got to the easternmost point at Tockwith, and that lovely tailwind turned into a strong, gusty headwind. Navah was quite taken by the flags on display in front of the prison and stopped to take a photo, much to the consternation of Sarah who was worried that someone would take offense (or offence, to some of you), but no one came out to yell. Everyone was happy to reach Wetherby part two and stop at The Gourmet, but the sun had disappeared and it was chilly enough for everyone to be happy to start moving again after some lovely tea, coffee, and cakes. We did take a detour at that point to avoid the likely mucky off-road path out of Wetherby. Chris peeled off somewhere before Harrogate to take an alternate route home, and seven climbed that final awful hill up to the showgrounds to finish. 38 miles and about 1900 feet of climbing. -Navah L. 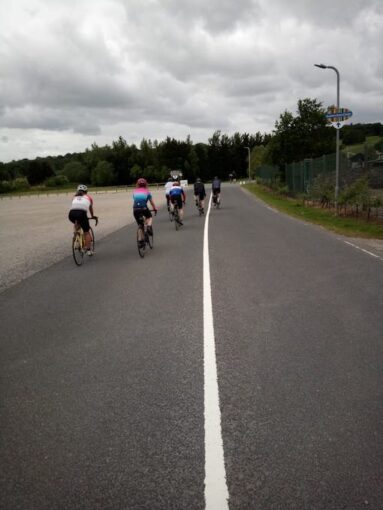 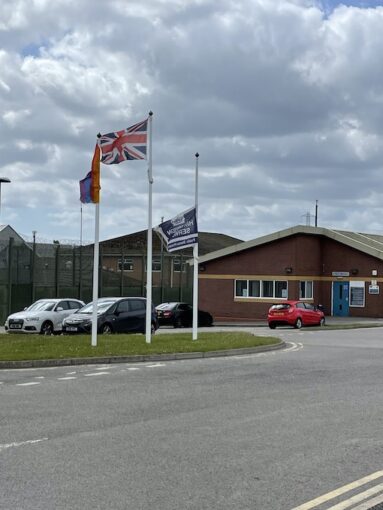 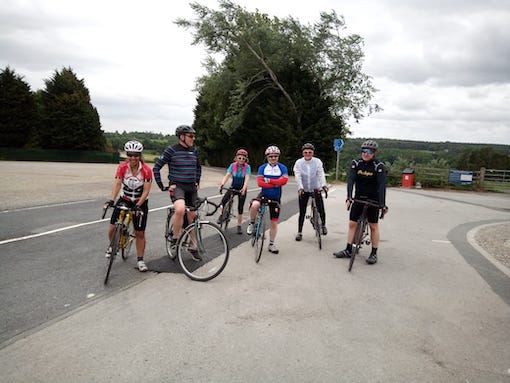 Blustery day but no complaints from a grand group of 8 riders who pedalled hard into the head wind on the return flight home. We took off through Kirkby Blownover, taking the railway path from Wetherby and headed to Tockwith where Brian left us.  Tim 2, Kevin, Dave, Sally, David, Jonie & I followed the runways East, passing a fine steam traction engine – this was actually Route 32a as I included a little déviation to Rufforth for our pause-café at The Old School; benches and bike parking at the rear, friendly service with good refreshments, perhaps a little slow but then it does also serve as the community shop.  Whilst waiting, we discussed the latest political diversion and affirmed that we were indeed bilingual in Imperial and Metric, so no need for a retro law.  We banked right onto Mill Lane out of Rufforth, then Atterwith Lane took us to the Marston Moor monument for the obligatory group photo where Tom, a passing Harrogate cyclist, volunteered to take it and then cycled with us as far as Cattal.  Just before Hunsingore, Dave’s rear tyre found a thorn, which he and Kevin dealt with pretty efficiently and we resumed the flight path to Walshford, braving overgrown nettles and brambles to reach Ox Close Lane.  Feet on the throttles as we headed up Follifoot and Rudding Park back to the showground to complete 45-48 miles and over 2,000 ft elevation.  Thanks for nice company and special merit to newcomer Jonie on a borrowed bike who rose to the challenge splendidly.  Yvonne D. 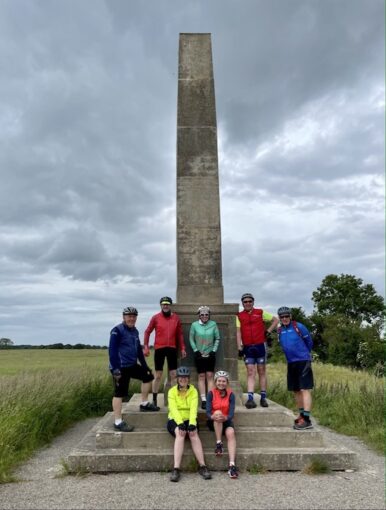 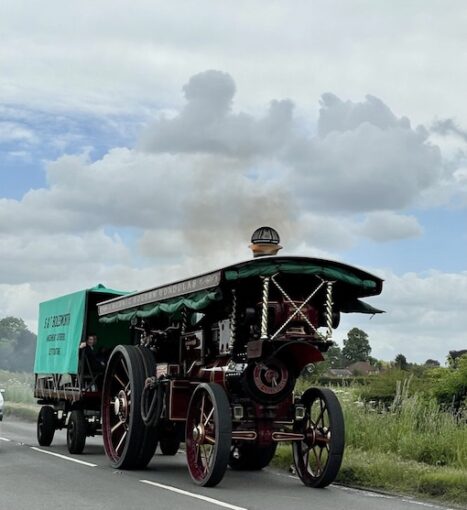 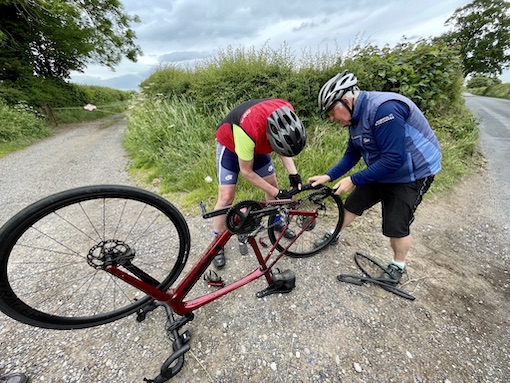 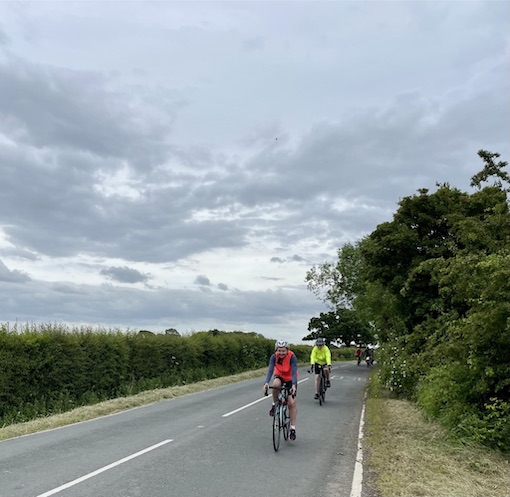 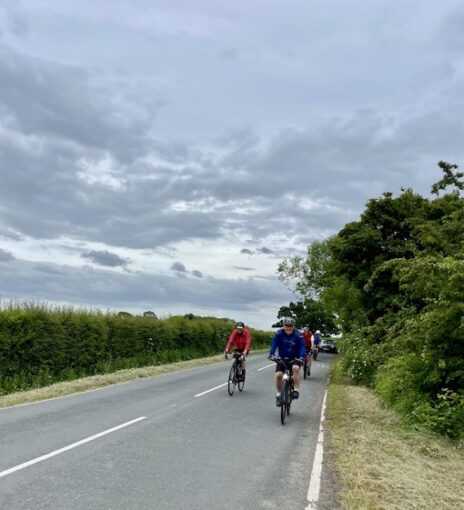 A wild and windy ride out to Masham but following the route of the pretty villages Aldfield, Laverton, Kirkby Malzeard, Grewelthorpe and Swinton. There are a lot of hills bravely and well ridden by Colin, Margaret and Monica. The rest of used less effort on our assortment of machines which were carefully examined by other cyclists at Johnny Baghdad. By the time we arrived it was perishing but some agile manoeuvres meant that we got two tables together inside. No mean feat when you think about the size of the place and its popularity.
Paul and Gia avoided any speeding tickets but raced back via the shortest route through Grantley and Sawley. You always meet someone you know on the Greenway and there was Malcolm with his secateurs keeping the path clear. Great ride 50 miles for the escapees and probably 55 for the remaining group who will have followed the prescribed route. Gia 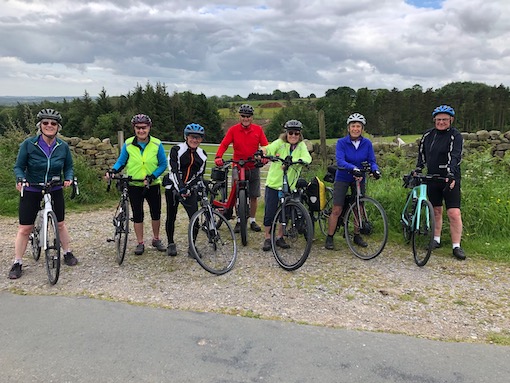 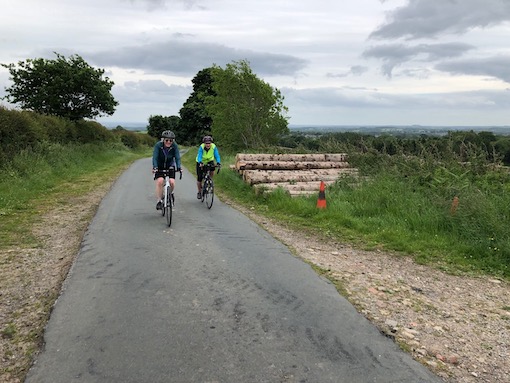 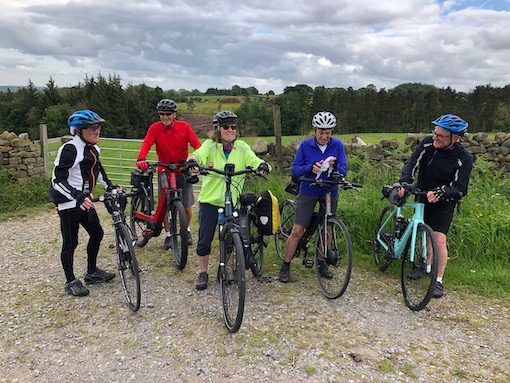 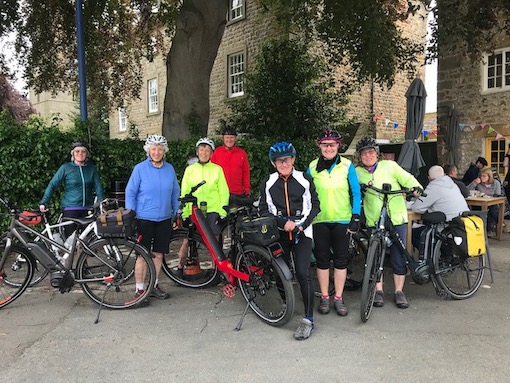 The Medium Plus Steady was as usual oversubscribed, so after some cajoling and bargaining two groups formed up and we left the Showground. We then headed off to the Green Way where we picked up another two riders. On the Green Way there was nearly a coming together of bikes as we had to take evasive action to avoid a runaway dog. Although the published ride route calls for a refreshment stop at Fountains, the leader decided this was far too early to stop. The ride then proceeded to Aldfield and High Grantley. On leaving High Grantley the leader informed the group to take the next left to Laverton, but when it came to the turning the three leading riders went straight on. On reaching Laverton the three rejoined the group and it was on to Kirkby Malzeard. On the narrow lane leaving the village we were confronted with a traffic jam, involving one large four wheel vehicle and a car. With suitable encouragement and guidance by ourselves we managed unblock the road. Although there was a market on in Masham and it was very busy we managed to get seated at the Bordar Cafe. The return journey was uneventful with everyone agreeing to abandon the published route and return via Knaresborough to avoid the blustery headwinds. PCJ

Only four takers for the short ride on this sunny but very blustery day. Justine, Debbie and it was nice to meet new guy Steve who was trying a short ‘taster’ ride with us.
The route was a well traveled one along the greenway to Sophie’s in Hampsthwaite where light refreshment was taken ( apart from my full English that is!) and we all had a most enjoyable chat and a break.
We took the country way back from Hampsthwaite using Myers’s Green Lane which gave us some lovely views over the fields and hills then picked up the greenway to get us home. I peeled off to go to Starbeck and left the other three to go their own way home.
A most enjoyable ride out with nice company on a lovely day. I hope we left you with a good impression          Steve. 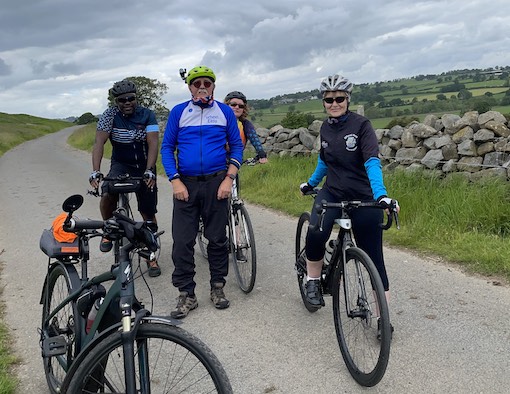 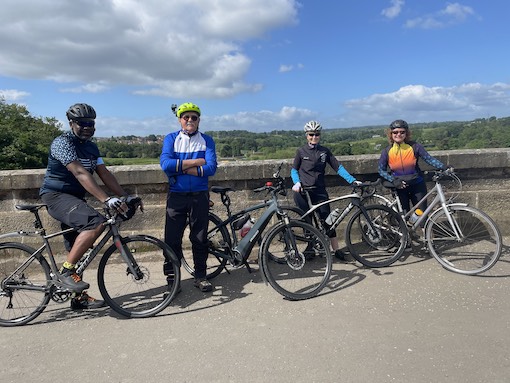