There were just five riders for the short ride today and the weather seemed fine and dry as we set out westwards to Leadhall Lane and on to Rossett and Beckwithshaw then grinding upwards into a steady headwind to Stainburn Plantation. Two riders left at this point, one to the med group and the other to go at her own pace.

So three of us rode on, past the Sun Inn, crossing the A59 at Kettlesing and on through Tang. At this point, two riders took their own route to Sophie’s café while I continued on the planned route via Clapham Green, Hamps., Ripley and the Greenway back to the south side of Harrogate. 24miles in the dry and back for 12.40. Peter B

Five people, four hoary old lags and shiny newbie Sarah, out on her first medium ride, assembled at Hookstone for a test of climbing. We were faced with some challenging hills today as the route took us up to Timble and then to Stonehouse via the steep hills around Thruscross reservoir. Would we prove to be grimpeurs or whimpeurs?

Neither the skies nor the forecast looked great and it was cool for August, but we soon warmed up once underway and took the usual route to Fewston via Beckwithshaw, Little Almscliffe (where we acquired Yasmin) and Swinsty reservoir. After an interesting couple of minutes watching the ice cream van trying, unsuccessfully, to get under the height-restiction bar at Fewston carpark, we started the climb to Timble where it started to rain. Nevertheless, we stopped and gave a moment’s thought for the poor people in the car park who would be ice creamless today. Or at least I did. The others just put on their waterproofs.

Onward and upward as they say, but initially it was downward to the A59, by which time it had stopped raining. We crossed over and started the steep climb to the reservoir, which we all made successfully and I didn’t see anybody walking, honest. A pause to get our heart rates back to under 200, and then off across the reservoir wall to climb up to Stonehouse. Here we turned right down to Menwith, along Delves ridge and down the hill to Meg Gate and Hampsthwaite. We stopped at Sophie’s of course, where quite a lot of the Wheel Easy membership was there in the guise of a number of different rides. Who knew?

Refreshed, we decided to return to Harrogate via Knox rather than going through Ripley which would have been busy with the Ripley Show. People started leaving the ride to go home after Knox. Where would we be without hills and grimpeurs to go up them? 47 Km in great company. Al D 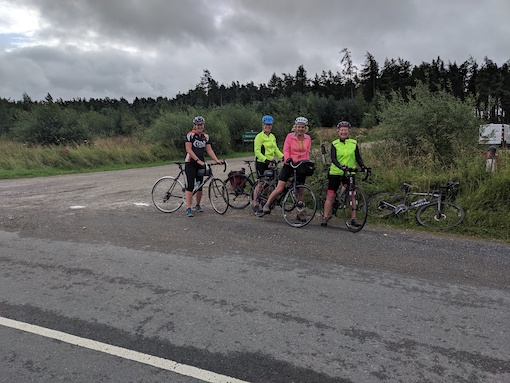 On this windy, slightly damp day, a long, flat ride didn’t appeal, so a group of nine decided to follow Gia’s suggestion of going to Tofts Farm Café on Greenhow Hill. The route was via Little Almscliffe, Menwith Hill, Thornthwaite, Padside and Braithwaite Lane to Greenhow Hill.

James left us at Menwith Hill. By the time the end of Braithwaite Lane was reached, black clouds were overhead, visability reduced, it was wetter and the wind was very strong. Sarah, Pete B and Steve W decided to stick with the route while Gia, Paul, Debbie and two Lizs decided to head for home. With the wind behind us we soon reached Menwith Hill Road and then Sophie’s.

Many of the Medium riders had beaten us to Sophie’s and Malcolm was also there. We soon warmed up with hot coffees and an assortment of food. The ladies then headed up Clint Bank to use the Greenway to get home while Paul went on a more direct route. Total mileage was 36 miles with 2,400 ft. Thanks to all for a great ride even if we missed out a lot of the original route. Liz P 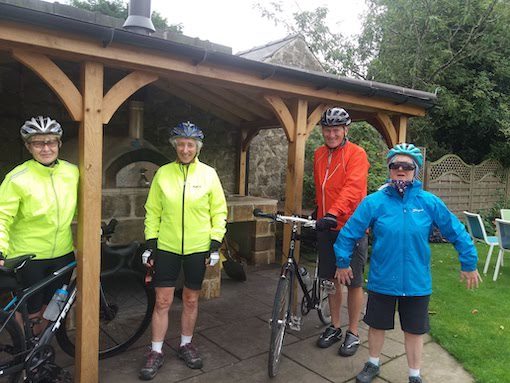 We had 12 riders for the long ride, which was a great turnout, in particular for a possibly dodgy weather day. As it turned out, we had 1 light shower and a few drops – a win!  Riding mainly downwind, it was easy going to Crokey Hill cafe where we had the usual great service and good cycling grub. Dave S decided to return to base as he was tight on time – great to see him out on a long ride again. He also told me he’d done a 5k run….impressive!

The next leg to Lotherton Hall was a bit of a drag into the wind but we made quite good time, and the cafe was thankfully quiet – last time here it was heaving and we didn’t stay.

We had a fair few hills back to Harrogate/Knaresborough/Hornbeam and I, for one, was a bit weary by the end – at 74 miles my longest ride this year. On the way we lost James and Dave W who had forged ahead and then, by a previously unknown miracle, they reappeared. We had of course dropped the pace off to give them a chance (hee, hee, hee!).  So, at 74 miles, a very nice ride with great company!  John H
We use cookies on our website to give you the most relevant experience by remembering your preferences and repeat visits. By clicking “Accept All”, you consent to the use of ALL the cookies. However, you may visit "Cookie Settings" to provide a controlled consent.
Cookie SettingsAccept All
Manage consent