The calendar said route 137 so we set off towards Knaresborough and Ripon but avoided the riverside path due to the icy start to the day. I was picked up by Trefor, Darcy and Paul at the Woodlands and Jon and Dave were waiting at Sandy bank making six in total.

A lovely bright morning with a very fresh breeze, some would say icy! We got to Ripon in one piece in spite of one car driver in particular hurtling along the lanes with the sun in their eyes; we wondered how much they saw of us. The sun direction is certainly a consideration when planning a route or where to position yourself at this time of year with the sun so low and bright.

In the absence of our leader, suffering from man flu according to someone who will remain nameless, Paul had set a cracking pace. At Ripon a decision to be made; should we continue as planned or had we passed enough icy puddles for caution being the better part of valour? Caution it was, so we headed to B’bridge and a work out on the old A1.

Jonathan had announced that he needed brownie points and wanted to go easy on his strained ligaments after his fall on ice last week and was taking a shorter loop home. So we had his company for longer than expected which was good. Dave, inspite of reassurances, decided he didn’t fancy through and off so he left us at B’bridge with Jon.

Down to four we headed north along the old A1, each spending a minute or two on the front and everyone being well behaved so the only acceleration was to get tucked back in after pulling off the front. Up to Dishforth and back was enough to convince us all that Plenty would be a good stopping point and that we should repeat the exercise on a warm summer evening! Lots of cyclists at Plenty meant we sat outside which, as Paul said, was nice for the first 10 minutes until the perspiration started to cool, that’ll teach him not to put so much effort in! Darcy gave us a show of sartorial elegance as we enjoyed each others company and warm coffee.

We shared book reviews and I tried to explain that we should return via Minskip at recovery pace but my plan didn’t work, the recovery pace part that is. Darcy must have picked up his extra good legs this morning as he powered on and led us to Farnham cross roads and back to Knaresboro where I was waited for to be wished goodbye. Darcy agreed to fit mudguards for his next ride, hopefully the loss of aero will make him use up a few more watts.

What a good day in excellent company. We did our 40 miles albeit not the ones planned, and we had a good workout (or playing at being racing cyclists) with our overall average of 16mph+ 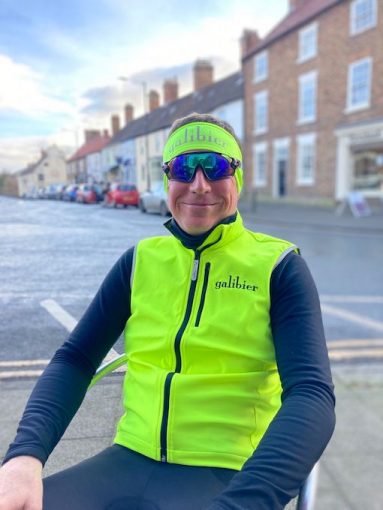