Two short riders for certain…we had decided to meet some short ride drop outs at the pub in Spofforth and how lovely The Dave Preston and Gentleman W.E. Ornithologist Peter B accompanied us.  In miserable drear conditions we set off to Knaresborough, greeting Dave s normal cycling companions at Low Bridge….onward to Little Ribston..

I always forget the actual name, but listened to a skylark as we quickly took the turn off to Spofforth.   Arriving at the Castle pub car park the four drops outs also swooped in....in cars.

After a very jolly three quarter hour of coffee and chat the two gentlemen felt they should return home.  The six remaining chatted for sometime more then went on their various ways back home. As we headed to Folifoot we were overtaken by Surjon  who had had a quick ride to  Bramham. By this time the sun was shining and it was strangely spring like as we pedalled home. A few miles 18 and a lot of fun. Caroline G 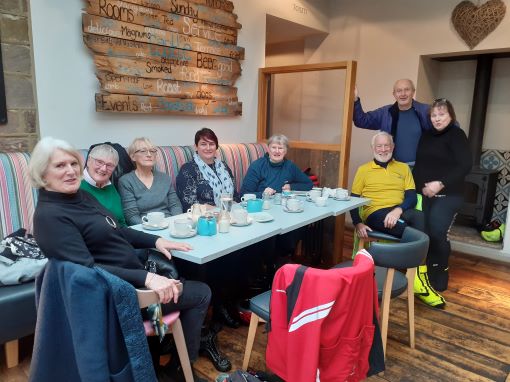 It was a dark and damp morning at Hornbeam this morning and I hadn’t decided which ride to join when I arrived. Despite the cheery banter of the assembled mass I wasn’t alone in being undecided. Decisions have to be made in life so I plumbed for the medium in view of the conditions. So along with eight others including Debbie and Christine on their inaugural ride with WE and under the watchful eye of Liz P we headed for Burn Bridge and Kirby Overblow.

Paul was waiting at Kirby. The conditions weren’t bad but the drizzle was persistent as we climbed over Sicklinghall and dropped into Wetherby. James departed due to other commitments. Down the cycle path at the side of the A1 to Bramham where Paul took a tumble on a greasy manhole cover turning left towards Boston Spa. Naturally shaken a few minutes were taken to sort out his gears and for him to regain his composure.

Onto Thorp Arch, still in the drizzle, for our café stop. John left us here for home. By the time we left the sun was just about making an appearance. Along the cycle path(very muddy in places) to Wetherby and Little Ribston where I said my goodbyes. A good ride and fab company as ever. Well done to Debbie and Christine and hope we’ll see you again on future rides. 33 miles for me. Wet happy and content.  Colin B 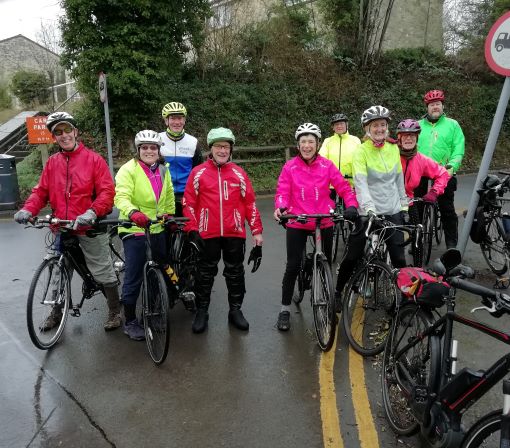 Another drizzly Sunday morning not giving much motivation for many to go on another damp and mucky ride. Gia formed a group of ten to attempt the planned Medium Plus ride with options for other routes if the weather did not change. Sue set off and nine of us followed to Burn Bridge up to the busy roundabout and then left on to Walton Head Lane.

The Medium ride was in front of us and soon disappeared into the mist. The group spilt into two rides, Gia was heading for Weeton and then going for a different route home. Steve, Robert, Margaret, Monica and me decided to carry on the Medium Plus full route. The weather was not heavy rain but still murky and damp as we rode on to Dunkeswich, then Castley, it is always nice to ride along the riverside which was in full spate. Crossing over onto Leathley, then hitting the hill climbing before turning down the lovely back lane to Lindley.

Snowdrops were in abundance and though still misty it was not unpleasant and the views opened up. Along the gated road to Stainburn Wood, where we decided not to go through the woods but turned left to go along the track to climb up Norwood Edge. Across the A59 past Menwith Hill, down Sheep Cote Lane to the Post Office and café at Darley. The first group of Medium Plus riders was just finishing their lunch and we took their warm seats for our refreshments. It is a well stock shop and the teacakes were delicious, well worth visiting and supporting the community shop.

The famous five set off and cycled on to Hartwith Toll road, the sun was shining and a large beautiful rainbow glistened over the moorland view as we climbed up Stripe Lane. Down to Burnt Bridge and left to Clint Bank. Monica left to go via Grainbeck to see what condition the road was in at Knox. The four of us turned down Hollybank Wood and into Ripley. Robert went flashing along to Killinghall and back to Leeds with his lights full on. Steve, Margaret and I went down the Greenway and at Bilton junction like the Red Arrows formation flying team, Steve went left, Margaret straight on and Liz turned right. Hope everyone got home safely. Despite the drizzle a pleasant ride with most of us not having done the route this way round which made it interesting and thanks to Monica’s Garmin we did not go off piste. 42 miles.  Liz F 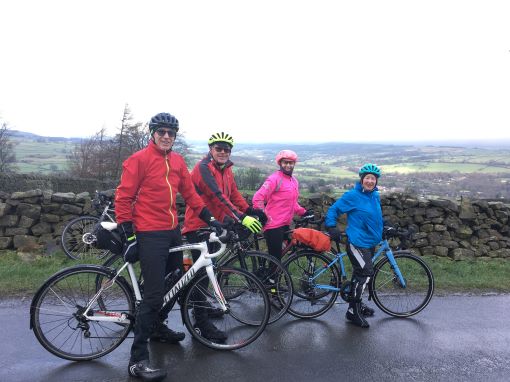 A driech morning led to only one medium plus group turning up, putting a brace face on things and getting on with the ride. The visibility worsened even more as we climbed up Norwood Edge (following the planned route through Stainburn Forest being so obviously silly in this weather nobody even asked about doing it).

After a few dropped off near Menwith Hill and two opted to pass on a cafe stop, the remainder tried the new-ish cafe in Darley (it’s very good!) and the the sunshine came out for a glorious ride home, managing just about 40 miles. Michael I 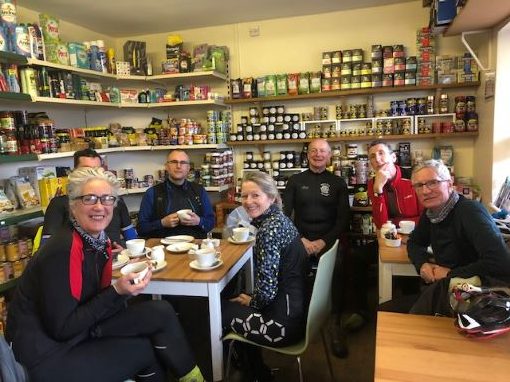 The suggested  route looked excellent and we were looking forward to riding it, unfortunately due to the weather four of us decided to cut it short. We followed the route to Kirkby Overblow but turned off at Weeton and headed to Almscliffe Crag, Beckwithshaw, Penny Pot and onto Hampsthwaite for coffee. During coffee the rain stopped and the sun came out but we decided to head home as we were all still damp. An enjoyable 28 mile ride. Paul T 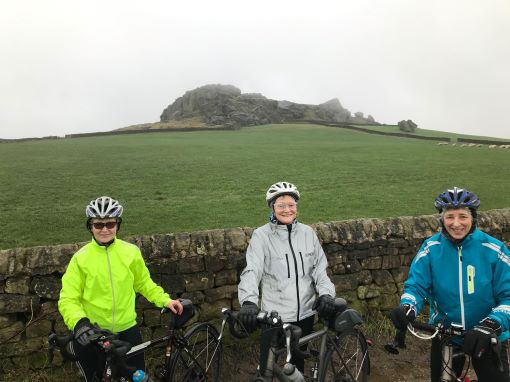