Kicked by the wind but still willin’, seven hearty souls headed west past Little Almscliffe, down Jack Hill Lane (pausing to admire the rainbow over Swinsty reservoir but looking in vain for Great Whernside), across Lindley, Leathley and arriving for a welcome stop at the Local Pantry on the Harrogate Road. Kevin joined us for hot drinks and cake and we were pleased to see him looking so well and working towards a full recovery. As it was a dull day and most of us had jobs back home (yawn), we cut the ride short and headed back to Harrogate via Almscliffe, Briscoe Ridge and Burn Bridge. Thanks to Gia, Monica, Alan, Colin, James, and Paul for my first Wheel Easy ride this year. 44k and 650m elevation. Maris. 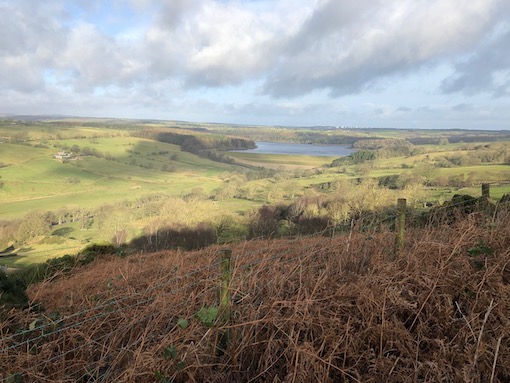 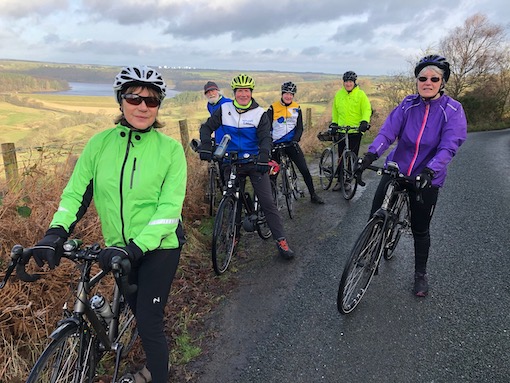 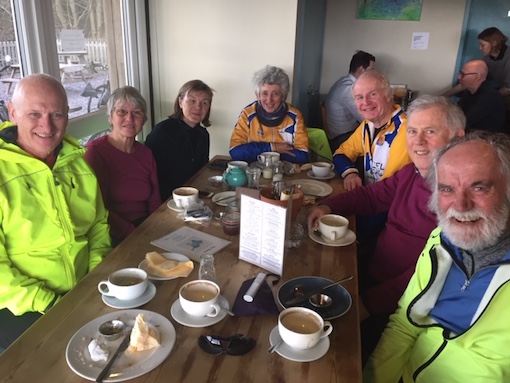 The Wanderers on the Ripon route split into two groups,a fast 7,and a regular 9. Once the fast team had sped away the normal nine made steady progress along the Greenway on route to Shaw Mills where leader Mike suffered a rear wheel puncture. Another Mike was deputed to ensure the group made it safely to Olivers in Ripon while David kindly assisted leader Mike with repairs.

All riders were reunited upstairs in the cafe before following the prescribed route back to Occany where a slight detour via Lingerfield ensured leader Mike could wave goodbye as he passed his house in Scriven,leaving the remainder of the group to the delights of Knaresborough Hill.
Good ride,fine weather,excellent company,very little traffic on the muddy roads and no deer to be seen in the deer park.   MIke P. 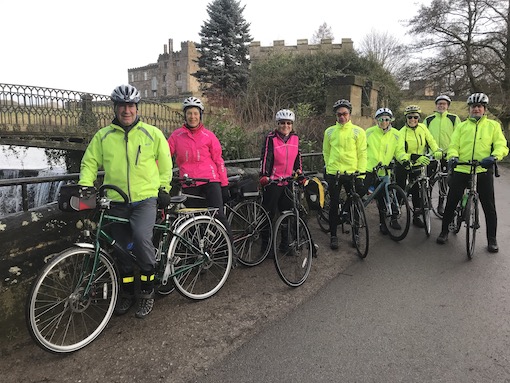 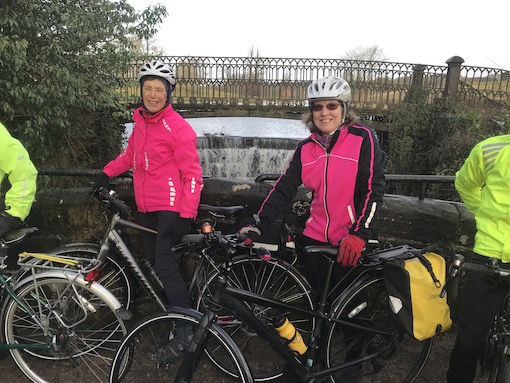 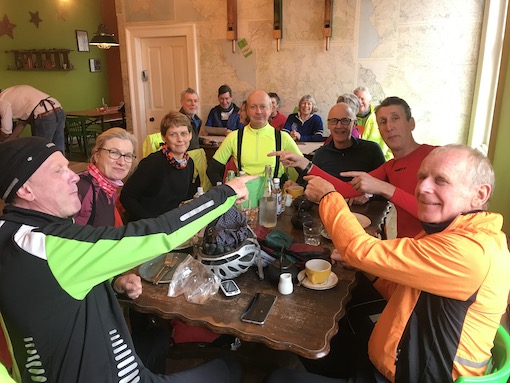 So here it is – the last ride before we leave Europe for ever. Quite simply Top Tim, Zozo, Toni, Vincente, Letty, Tall Tim and Marco followed Route 23 as specified; stopping at Olivers in Ripon for a last cuppa before supplies start to run low after Friday’s deadline. The weather was drab and thankfully nothing exceptional occurred (unlike the ride on Sunday: falls, equipment failures and riders splitting off) although some of the hills did seem a bit longer and harder than usual but that could be down to too much cake or the mud piled up on the frames of our bikes. So there you have it – a perfectly middling ride except for Zozo’s delightfully idiosyncratic choice of peanut butter and jam on toast at the café. And 7 absolutely filthy bikes as we arabesqued back into town. Tall Tim 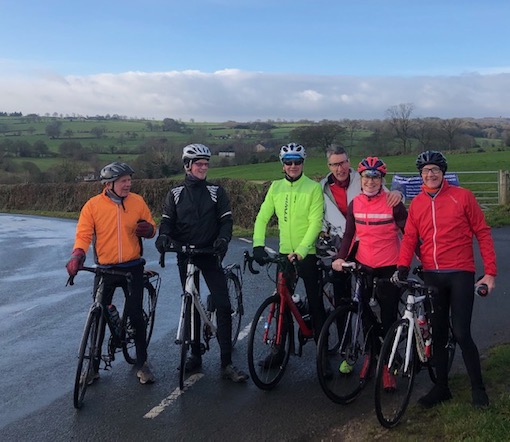 This morning there was a choice of a longer ride for anyone that was interested. Severn riders set off from Hornbeam out towards Spofforth, Wetherby then the cycle path to Walton on to Wighill and Tadcaster. Then it was a very good ride at a steady pace, there was very little of traffic about, as we went through Bolton Percy towards Bishopthorpe with a photo stop at the Palace, someone from a group of walkers took our photo then Mike took a photo for them.  As we crossed the Millennium Bridge towards Cycle Heaven for our café stop, a couple of Sustrans PR persons asked it they could have a chat with us, we said that most of us were members of Sustrans and a few of us also volunteer to help clear cycle paths around Harrogate, then one of them took our photo. After coffee it was though York, crossing Scarborough Bridge onto the cycle path to Overton. Some new tarmac had been put down in places and it was clear of mud. Looking at the rail signpost for Edinburgh, we thought it best to leave that ride for another day! We cycled on to Beningbrough Hall, Great Ouseburn where we picked up a headwind back to Harrogate, at least the rain held off. 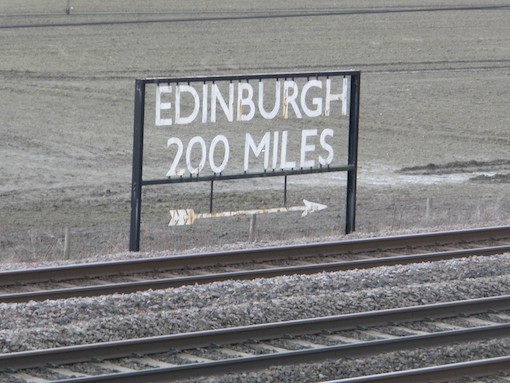 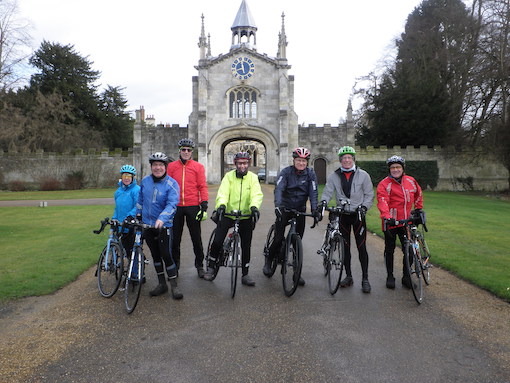 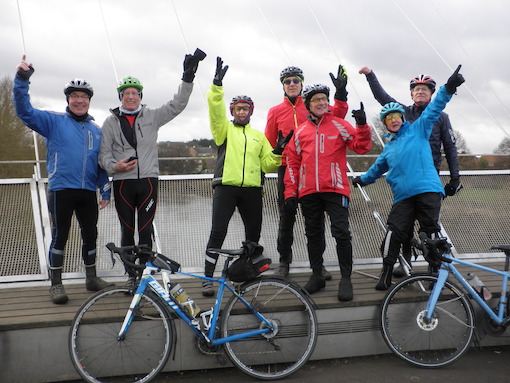 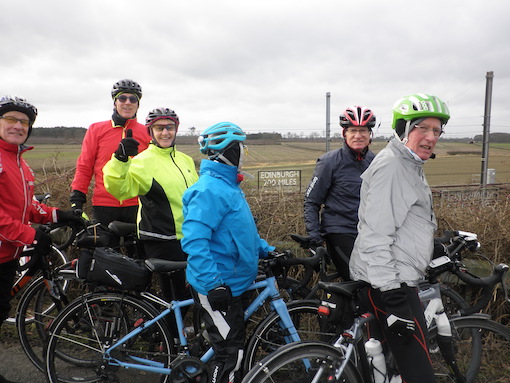 Just two of us at the rollout today, but with arrangements to gather up more takers at Bilton Lane and Ripley car parks, the group mustered 8 riders – a healthy turn-out given the wind warnings in the forecast and the very low “feels like” temperatures.  So chilly was the ride down the Greenway from Bilton, that the customary pre-emptive comfort stop at the toilets saw good use of the hot air drier. Our route to Masham was devised to give a N-S direction in the hope of minimising headwind pain.  It worked to a degree but there were inevitably some sections in a westerly direction that justified the Met Office’s warnings.  With the main climbs loaded on the outward leg, progress was steady as far as Grewelthorpe after which the combination rising ground towards Ilton and a gusty headwind produced the first mutterings from group.  Hopefully, these were dispelled by the terrific tailwind-assisted descent through Wathermarske and Swinton to the Golf Club and Masham’s Market Place. Here Johnny B’s proved to be full (or too full to fit us all in).  Staff at Bordar House Cafe, however, shifted tables and seated us nicely – thank you Ma’am.  This quietened rising fears in the ride leader’s mind that we were going to have a reversal of last week’s double cafe closures!  I’m glad that Bordar had plenty of beans available, as we all chose some combination involving them.  Meanwhile, the familiar face of Peter B popped his head round the door looking for a space.  Peter had spun off from the usual EG ride today and by chance found and joined us for the return leg.  In the Market Place, the group set about trying to resolve the complementary front ring issues that Lesley and Richard had battled with to Masham.  One couldn’t get into the small ring while the other couldn’t get into the big ring, a sort of cycling Jack Spratt situation!  Sadly, the obvious tweaks to cable tension, stop screw settings  and debris clearance didn’t fully solve the issues.  So, with ring choice pre-set, off we went on the return leg, now 9 strong.  With the benefit of gentler terrain and more sheltered lanes, we were soon approaching West Tanfield after just two notable inclines at High Burton and the Well hairpin.  Here Chris B headed directly home for an evening appointment – thanks for joining us today, Chris.  Any thoughts that we were now safely out of the windy zone were (literally) blown away when we turned westwards after Littlethorpe towards Bishop M.  Such was the battle that, on reaching Bishop M, only Graham chose the official route back via Markington, Drovers and Ripley – chapeau.  Preferring to battle to Knaresborough roadworks instead, the rest of the group headed back to Bogs Lane.  Surprisingly, the climb to the Golf Club was sheltered despite its westerly direction, perhaps giving us the advantage of the lee of the hill.  Whatever the cause, it was welcome.  Farewells and thanks exchanged at the top brought another January bonus ride to a conclusion, giving a mileage in mid-50s for most with 3000ft.  Climate change or not, this January has seen a full complement of Weds rides, unlike last year when two were cancelled due to ice, sending us looking for our hiking boots.  Grand days out!         Terry Smith 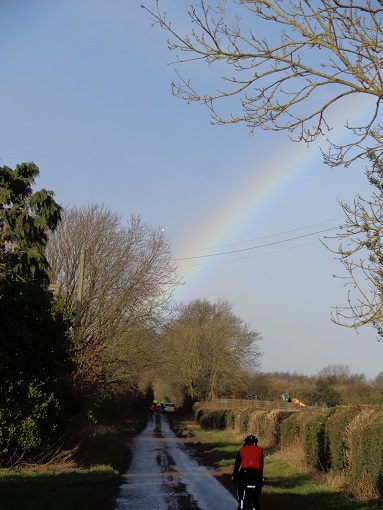 Following a catastrophic night dealing with a leaking toilet cistern, losing 2 hours sleep as a consequence, I surprisingly, to myself, still managed to join the assembled throng at Low Bridge. Dave P. was intending to head north with the “B” Team, whilst Marvin had suggested the remaining group try to take a route minimising the expected effects of the westerly to south westerly winds and head off to York.
Five of us set forth aiming to go via Tadcaster and as the weaker member I was able to tuck in behind, to be graciously pulled along by generous co-riders at a brisk pace.
After Little Ribston it was suggested that we modify the route after Tadcaster to head for Sherburn in Elmet (just for a change from York) via Aberford and Micklefield which everyone seemed in favour of, to blindly follow yet another unknown track.
Stopping off at the Lemon Tree for a quick break we headed into the wind climbing out of Tadcaster towards Bramham but peeling off south west onto Warren Lane leading to Spen Common Lane. A narrow but well surfaced road previously untried by ourselves. It brought us out onto the old A1 apparently known at that point as Paradise Way.
Turning south we followed the old Great North Road south through Aberford and Micklefield  then turning towards our intended lunch halt at Lotherton Hall via Sherburn.
Unfortunately our plans were thwarted by a rear wheel puncture in the self appointments leaders machine just passed Squires Cafe Bar famous for being the motorcyclist eatery.
They say many hands make light work and with Colin and Geoffs help to remove and replace  a very tight fitting Continental Allseasons tyre we were soon on our way.
However it was realised that by now we would need to reprise our intended route and miss out Lotherton Hall lunch halt heading back towards Tadcaster to refresh before heading home before the light faded.
Dave P.(2) needed a quick halt to clear the build up of farmers detritus gathering under his rear guard sufficiently to draw him to a halt before we were able to pass through Saxton and Towton.
A late lunch at 2.30pm, just prior to the cafe closing at 3.00pm meant we were back on the road round about 3.20pm With 16 miles for the tiring and slowing leader once again the peloton pulled together to shield this weakening member each in their turn and we were able to reach Gribbald Bridge and Abbey Road, just before darkness fell.
Thanks to the lads, Martin, Geoff, Dave P.(2) and Colin for all your encouragement in completing 55 miles. (On top of last weeks 55 miles). After such a long lay-off from distance cycling these past two years slowly, maybe, the pace will improve and I’ll get somewhere back to fitness………Dave W.
We use cookies on our website to give you the most relevant experience by remembering your preferences and repeat visits. By clicking “Accept All”, you consent to the use of ALL the cookies. However, you may visit "Cookie Settings" to provide a controlled consent.
Cookie SettingsAccept All
Manage consent