No snow, no ice, no wind, no rain…November…a day that slashed through the grey damp raining days that were pretending to be November since September 19th 2019.

Four Poddlers emerged from hibernation And we set off for Wetherby via Kirby Overblow.  SurJon (with his broken ankle and boot) left us as we left Harrogate.  We arrived at Wetherby Shambles and spent a considerable time consuming butter-laden delights which would truly keep out any cold that might have develop.

Avoiding the must now be a mud bath bike path we headed home via Spofforth and Rudding. 24/26miles of real autumn before the day turned from amber to grey. Caroline G

Seventeen Wanderers set out on Steve’s hilly ride. It was indeed what it said on the tin! The first part was deceptive – a meander to Beckwithshaw followed by a gentle climb up to Norwood Edge and on the Fewston Farm shop for refreshment. The second group was most accommodating in coming a little later so as not to overwhelm the café!

Some left us there and the remainder joined together as one group. Suitably charged we set out on the hilly part of the ride. This involved Jack Hill, a road hitherto unknown to some of us. The first most picturesque photo stop looked over to Swinsty reservoir with the golf balls behind. There followed a rather hair raising steep decline but we all managed to avoid any slippery leaves and apply brakes accordingly.

What goes down must go up and this was no exception! This lovely quiet road eventually re-joined the B6451 and we went a short distance uphill to enter the gated road. With so many helpful Wanderers the gates were no obstacle and we sailed along with more lovely views. The hills were not over and at Leathley we turned towards Stainburn and up to Almscliff Crag which we had spotted earlier at the second photo stop. Numbers were gradually reducing as people peeled off home but the remainder passed through North Rigton for the last push up the hill before the final descent into Harrogate. 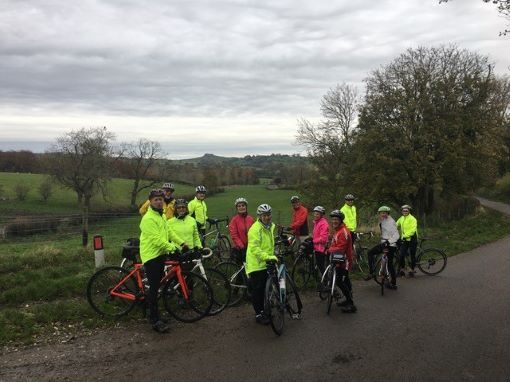 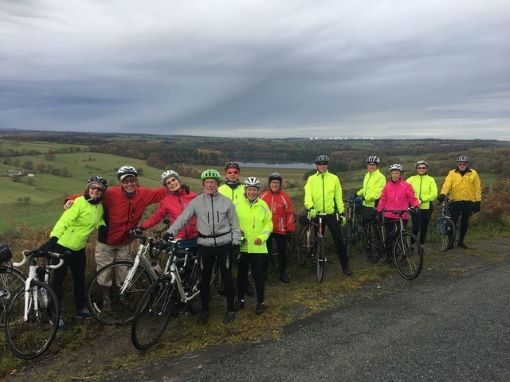 Tim No.1 (left) and Tall Tim (right – photo on the B6451) left Hornbeam ahead of the main groups with the express aim of getting a bacon sandwich at Fewston Farm Shop before a queue formed.

Job done,  back down past Swinsty Resevoir and then on to Jack Hill Lane – a quite bottom clenching ride due to the water, gravel, leaves, potholes, crazy pheasants, a stray photographer and general debris. And then a lovely ride back via  Almscliffe Crag and Brackenthwaite Lane. Beautiful autumnal colours all around. A total of 30 miles at 12 mph. Tim L 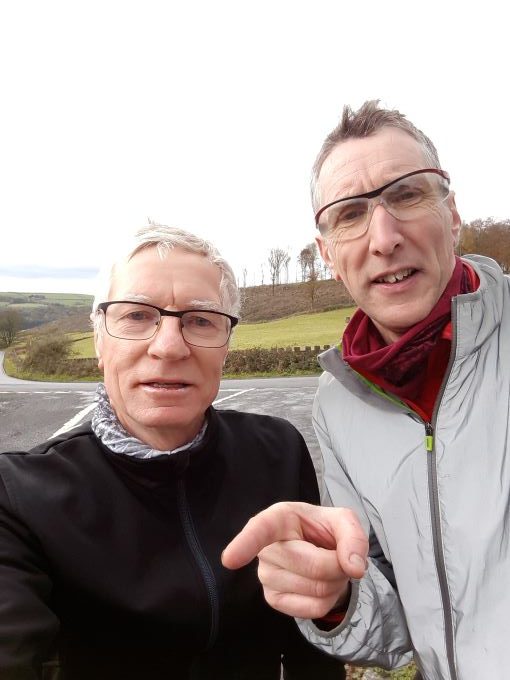 A dry chilly day with great visibility but the blue sky promised in the weather forecast remained tantalisingly stuck over the Vale of York. Probably the best week of the autumn for colour and Niderdale, Brimham and Fountains provided some great vistas topped off with arrays colourful berries (identification creating some debate) and flocks of migrating birds (identified by Collin).

So around 40 miles with some sharp climbs, punctuated by coffee at Oliver’s in Ripon, thanks to James for a great autumn ride! Peter D 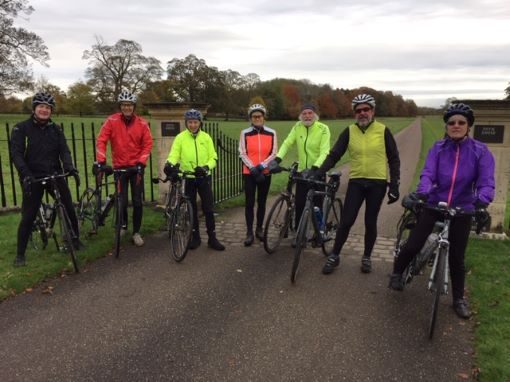 The long ride was due to go out towards Easingwold passing Knaresborough – so I had a lie in and joined Terry, Trevor and Peter J at Piccadilly Garage. The lack of wind meant a pleasant, uneventful and quick ride out over Aldwark bridge, to an early lunch stop at Easingwold via Tollerton and Huby.
We discussed the alternative return routes over lunch and opted for a shorter loop round to Boroughbridge given the forecast of rain arriving. We split up at Bishop Monton – Peter and Trefor going to Markington, while Terry and myself went the direct route to Knaresborough. This worked fairly well (for me!) as the rain was just starting as we approached Knaresborough. A fairly flat 1000ft for me – though the others will have had a bit more up to the lofty heights of Harrogate. 53miles at a 15mph average for me, probably a bit over 60 miles for the others. No photos, so I have popped the route on (from K’boro). Allen B. 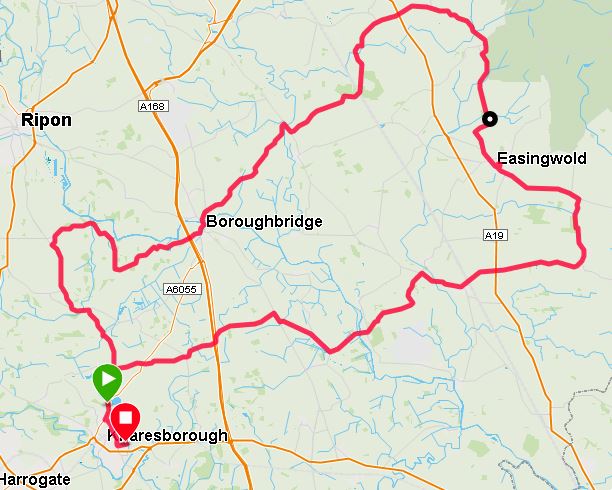 My journey to Hornbeam this morning was interrupted by a police escort rider who closed off the roundabout at Buttersyke Bar (the bypass) while two others escorted two black cars through the junction and off to Burn Bridge.  VIPs of some kind.

From Hornbeam three stalwarts headed out in the chilly air towards Knaresborough (Piccadilly Motors) to collect a fourth take for the day.  The plan was to head for Easingwold and decide whether the full proposed route, taking in a broad northerly sweep from Easingwold via Topcliffe, Rainton and Melmerby to Ripon, was going to be feasible given the rain due at about 4.00 and the fading light.  The chill induced a very brisk pace to Starbeck where we came up standing against that police escort again.  They waited while the level crossing opened and one of the outriders was a bit worried that we were too close to one of the vehicles.  With black-out windows there was no clue as to who was the escortee.  Memo to look in Advertiser of even Look North.

Once we got going, we kept up a lively pace outward over Aldwark Bridge and the very full Ouse, skirting round to Tollerton, Cross Lanes and Huby before heading to Easingwold from the SE.  Into Curious Table for elevenses by 11.15, we were glad of the warmth the snacks and the drinks.  Trefor had a rather luminous pea-green soup and on leaving the cafe, said he felt nice and warm.  I wonder if the green soup might have been radioactive?  Conversation in the cafe included a discussion of the merits of Bristol’s decision to ban private diesel cars from the centre – a ban that would directly affect Trefor on his journeys to the SW.

The Met Office was saying that we had until after 4.00 pm before rain might come, but the decision was still to cut the route a bit shorter by lopping off the northern arc to Ripon.  This proved to be good move as while we were heading away from Carlton Husthwaite to A19 some slight spots were felt.  Taking this as our spur, we stepped up the pace again heading directly to Bororoughbridge.  Taking the option to loop through Roecliffe to Bishop Monckton we rewarded ourselves with a banana break outside the Lamb and Flag, currently up for sale, we understand.  At this point, Peter and Trefor headed for Drovers via Markington, while Allen and self opted for Knaresborough, where the spots of rain began to join up at least an hour ahead of forecast.  From K’boro’ Lidl onwards it got pretty damp and gloomy but I think we mainly got away lightly.  Back to Hornbeam, after a cheery wave to James G as he headed up Forest Moor Road and home,  and the day was done after almost 64 miles at over 14 mph. Another bonus ride, overall. Terry S.

I finished replacing the inner tube in my rear wheel and rushed out very late even for me to meet the EG’s at Low Bridge. A variety of options were available, I could text or phone, or guess their destination and try to cut them off at the pass? I opted for keeping moving as fast as politeness would allow on the BB way and if they weren’t there try to catch them up before they got to Wetherby Rd. As it turned out I needn’t have worried they were still there at 10 past.

There was a large crowd it was great to see some familiar faces who hadn’t been out for a while but due to my delay I didn’t have time to acknowledge as many as I would have wanted. I guess as summer comes to an end we are all at home more and available, that certainly applies to me.

We had messages from two of our regulars, Eric would go straight to Tadcaster the A team destination and Dave W wouldn’t be attending this week.

Dave P had shouted encouragement to me to get a move on as I arrived late but he was heading off home having seen us off. The A and B teams had formed and were going to Tadcaster and Wetherby for morning stop. This meant we headed off together by the river but we soon settled into two groups  the busy road. I still had a full head of steam and lead the compact A team towards Wetherby, we regrouped in the usual place where Dave S complimented me on a nice easy pace, I thought I was trying reasonably hard!

Seven of us wrapped up against the wintery November morning headed to Tadcaster, Dave S, Dave W2, Dave P2, Nick, Colin, Geoff and I.  Encouraged by Dave’s description I pushed on from Wighill to Taddy which discouraged any attacks for the sprint until the last few 100 yards but did split the group, sorry guys!  We were organised and made welcome as ever at the Lemon tree where teacakes seemed to be the order of the day. Right behind us Eric arrived who had been delayed due to a medical appointment and we were all eager to hear his account.

Not for the first time I am reminded of Colin’s warning about language in his directions about saddle height and position. The next part of my report is not for the squeamish and only loosely based on actual events.  Eric has some nipple issues and it appears he has a nipple growing on his back! Eric says that it isn’t uncomfortable and makes dancing much more interesting but it did need looking into! During  his tests to distinguish his rogue nipple he had to put patches over his original pair, Eric wanted to show us how he could make one tassel go clockwise and the other go anti clockwise, we were eating and politely refused.

I also need to apologise for the burning sensation in Dave W’s ears, not present in person but mentioned and thought of.

We split on leaving Taddy, Geoff, Dave P2 and Nick deciding for various reasons to head home by a more direct route while the remaining now five headed towards York via Catterton and Bilbrough. Unusually and to avoid the probably leaf covered cycle paths we went into York not the quietest of routes  but we saw the Minster in Autumn sunshine, a fine sight. We emerged on the A19 and were soon on familiar roads and headed for Beningbrough Hall. The group split again with Colin and Eric deciding to stop for refreshments. I was feeling the miles and Dave S shared his hot cross bun and cheese sandwich (are they still hot if they are cold?). It seemed to do the trick and I was able to take my turn on the front on the way over Aldwark bridge and the usual route to Knaresborough. The forecast rain appeared at about 2:30, the time Eric and Colin estimated they were going to be setting off again I hope they didn’t get too wet. As we changed into waterproofs (could ask a similar question about the name) Dave S said ‘we don’t mind a bit of rain do we, it is just good to be alive!’ and he was, as he often is, right. 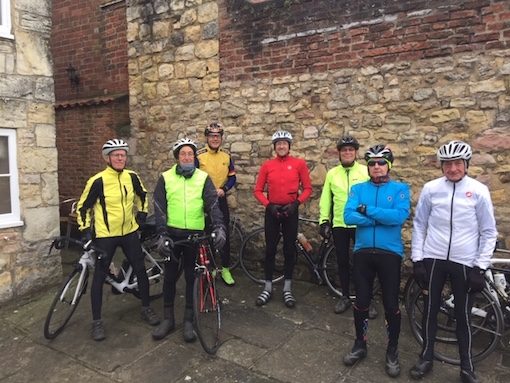