The forecast for today was pretty grim…. severe weather warnings with strong winds of up to 70 mph being forecast. So, it was with some trepidation that I set out to the start at Hornbeam Park. By the start time of 9:30 only 10 had turned up and four of those were going on the Wednesday Ride. So, it was with a small, select group of me and five others (Chris, Mike, Peter, Nigel and another Tim) who set off on the published route. This was a new route for Wheel-easy taking us to Bramham Moor and the site of the Battle of Bramham in 1408. We went via Burnbridge, Kirkby Overblow, Wetherby (Crossley Street and North Street) and along the cycle path next the A1(M) to Wattle Syke roundabout. We then took the delightful ‘newish’ West Woods Road to Bramham. I say newish but it must be about 10 years old now and still retains its lovely smooth tarmacadamed surface.

From Bramham we took the cycle path southwards parallel to Paradise Way to the battle field site at the junction with Spen Common Lane. Although taking it steady, we seemed to reach this spot quickly as with the wind behind us we were literally blown along! I wish all cycling was this easy! We were disappointed not to find the memorial to the battle and concluded either it had been vandalised or taken away for restoration; or maybe we had just missed it! From this point onwards until we reached our coffee stop at Thorp Arch the route was new to most of us. We crossed Bramham Moor, which incidentally was the site of an airfield in WW1 and a hanger still remains at Headley Hall farm which is now a grade 2 listed barn. The lanes round here were quiet so a photo opportunity presented itself (taken on Warren Lane).

We free wheeled down most of Rudgate, an old Roman Road, and at its northern end we picked up a brand-new cycle path being the route of the ex-York and North Midland Railway. The builder who had built the new estate on the site of the Papyrus Paper Mill near Newton Kyme had, as part of the planning approval, upgraded this together with the bridge which crosses the River Wharfe. See photos. The path between the SW corner of Thorp Arch Trading Estate and the bridge, a distance of about 150m, remains to be completed but even today after all the recent rain it was passable albeit a little muddy. In summer this would be ideal and opens up many possibilities for different cycle routes into Thorp Arch from the south and to Tadcaster or Rudgate/Bramham/Clifford from the north.

We replenished ourselves in the cafe on Thorp Arch Trading Estate before returning into gusty head winds along the cycle path into Wetherby and back to Harrogate via Kirk Deighton, North Deighton, Spofforth, Follifoot and Rudding Lane. Thankfully the winds were nowhere near as bad as forecast and it turned out to be a lovely mostly sunny day enjoyed by all. For the record we did 35 miles with 600 m of ascent. I understand that Chris Rogers is kindly going to create a new map for this route on the Wheel-easy web site which will be number 226.  Tim R 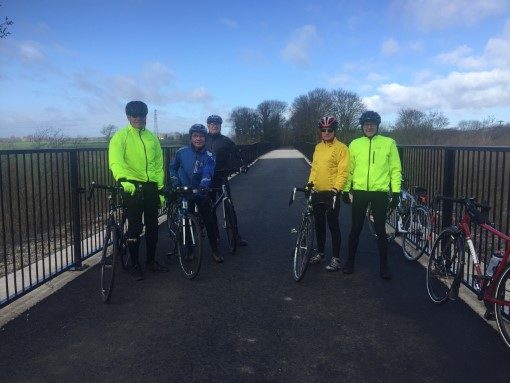 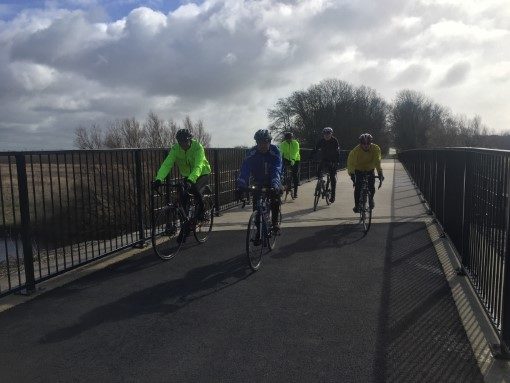 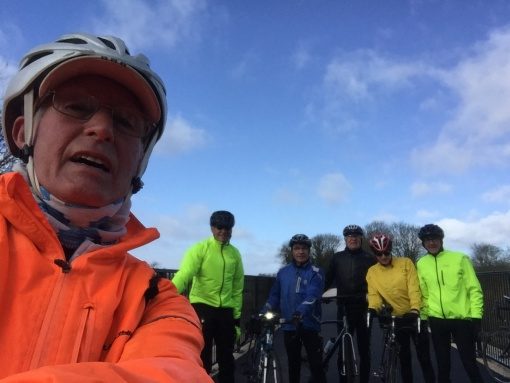 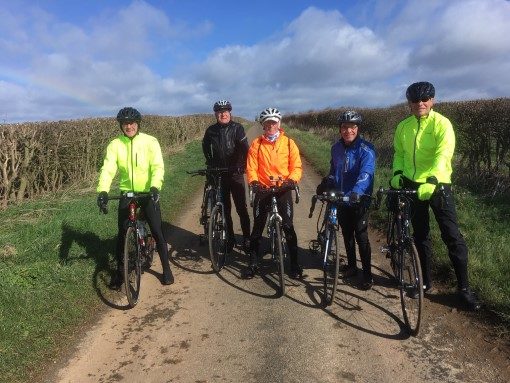 We had nine riders at Low Bridge, obviously not put off by threats of 50 mph winds.  Richard and Lesley were in our riders, so once again emphasizing that you not have to be male or elderly or even very elderly.  The wind direction was discussed and Dave Siswick, one of our seafarers suggested a north or south direction to minimise the effect of the strong wind.  So (guess what) it was south to Wetherby and Morrison`s cafe, the sun was in the blue sky, the roads were mostly dry, the wind was mostly on our backs and we were just about blown into Morrison`s cafe, Ahh! cycle heaven, apologies to a certain York shop.

On departure (see photo), the “A” team headed for Tadcaster, the “B” a twosome? of Dave P and Norman headed north on the cycle track to Walshford, the A168 the old Great North Road, no I don’t remember it been full of coaches and horses, or if you really want to be rude “Romans”.  On the very minor road over the level crossing and the York road to Whixley, and Thorpe Underwood, at Great Ouseburn a decision had to be made, left or right.  Left the shorter route in a very strong headwind on to a busy road, or right the longer but a flatter and somewhat more protected route via the Dunsforths to Boroughbridge (good call).  A look at the bridge in Boroughbridge to see the height of the river, a lot of trees with wet feet just like Waterside (see photos).

Then wind assist back to Morrison`s for a leisurely afternoon tea a browse round the magazine shelves and a wind assisted ride home in the sun.  The actual mileage was a little more than we had in mind, however our relaxed leisurely speed using a lot of granny ring meant we could handle the distance and the strong headwind without using up our reserves.  An excellent ride, and the message from this could be to us two and all the “B” teamers not present that the days are getting longer, let’s see what we can do. Electric bike riders would be a help to us. 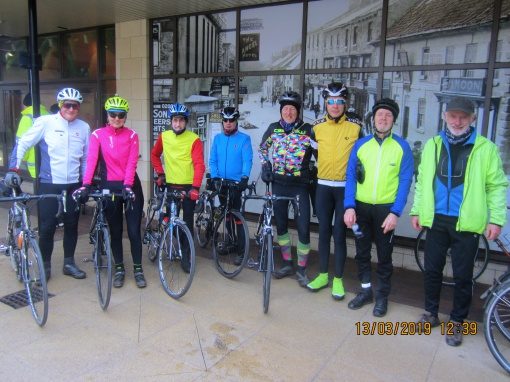 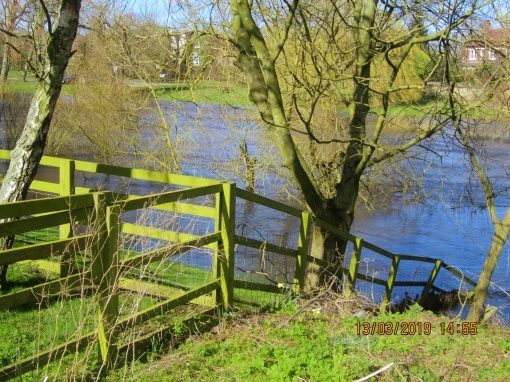 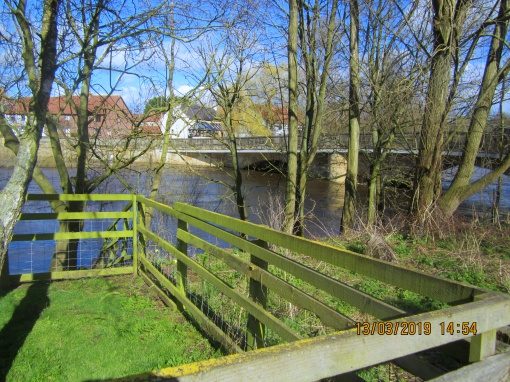