A slightly chilly morning brought out 7 takers for the pre-billed ride to Masham and Ripon via Brimham and Ringbeck.  Parts of the route involved use of newly-surfaced sections of the forthcoming Tour de Yks and the World Road Championships: if only we could engineer things so that Leadhall Lane was on the route!  Howhill Road said it was closed, which we dutifully respected by following the diversion to Otley Road, probably needlessly, but it gave us a chance to sample some new tarmac near Hoticap.  The next Tour de Yks benefit was the now billiard-table smooth section down Pot Bank and over the bridge – excellent, but what a shame they left in some of old corrugations at the top of the bank.  Collecting Graham at Pennypot gave us a full complement of 8.  Down through Hampsthwaite and up to Clapham Green and down again to Birstwith took us to the toll bridge and the start of the climb up Stripe Lane to Brimham for our photo stop (courtesy of Lesley)  opposite the adventure park.  Here we managed to obscure the inquisitive cattle from the picture.  Richard L left us before the Fellbeck descent/ turn, which led us out on to the moor where more new Tour tarmac was ridden.  Especially nice was the remade section over Skell Gill Bridge and up Skell Gill Bank.  Conditions called for a bit of jacket-on/ jacket-off malarkey for descents and ascents, before we said cheerio to Andy (early finish needed) at the Laverton turn.  Thus, it was 6 riders who traversed the Ringbeck loop to Wathermarske and the into Masham for a stop at Johnny B’s.  Masham market seemed rather depleted compared with the usual stalls, perhaps a reflection of holiday week.  Two riders were just leaving as we arrived.  Brief conversation revealed they were from Newton Aycliffe, which sounds a long way from Masham, but is only a couple of miles further than we had ridden from HG.  Funny things, mental maps.  Lunch over, a route conference weighed up the climbing vs distance differences of the Grewelthorpe and Snape options for Ripon, which Snape won.  High Burton excepted, it was downhill or flat to Ripon, taking us to the Spa Gardens cafe in good time for some of Caroline’s seasonal Simnel cake – not to be missed.  Sat outside the cafe we were treated to warm sunshine but also a view of building cloud – time to go before the deluge hit.  With farewells bid to Lesley and Richard at Bishop M, the remaining 4 headed for Drovers for another spot of jacket on/off fun before the successive peel-offs for home by Graham, Peter J, Jill and myself.  The rain was more serious from 5.00 pm onwards which was the perfect ending to an enjoyable day out: over 60 miles and 4000 ft plus ascent.  Thanks to everyone who came and added to day.   Terry 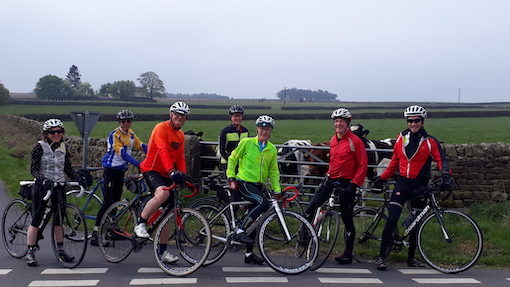 Wednesday Ride – to Pateley Bridge. Three riders set off from Hornbeam for the Wednesday ride, meeting up with three more at Ripley on our way to Pateley Bridge. Through Holly Bank woods where the bluebells were magnificent and the Wanderers stopped for a photo. Down Clint Bank along the Nidd valley through Birstwith, Darley and Thornthwaite. We took a typical Colin ‘turn off’ past Thornthwaite church and the lovely ‘packhorse bridge’. Along Heyshaw moor and down Yorke’s Folly where I was keen to try out my new disc brakes. I’m pleased to say ‘they worked’! We stopped for refreshments at Wildings where Martin and Kevin joined us and although you didn’t three halves of tea cake (as per Teacups) they were very tasty – as was everything else on offer. Gia took us to see the sculptures at an old railway turntable and off we went up through Glasshouses. Colin took the hilly route back through Smelthouses whilst the rest of us cycled through Summerbridge and over the toll bridge and then back the way we came. Lovely ride – 36.59 miles with 730 metres of climbing, steady pace – back in good time and still waiting for the rain! Janet G 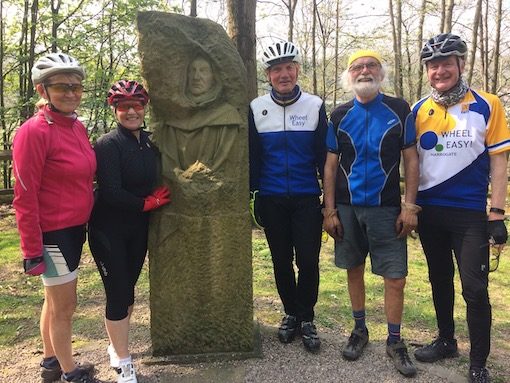 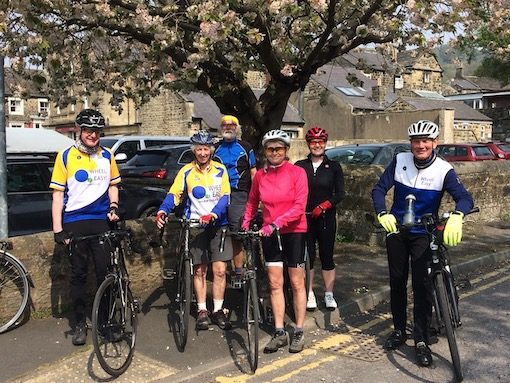 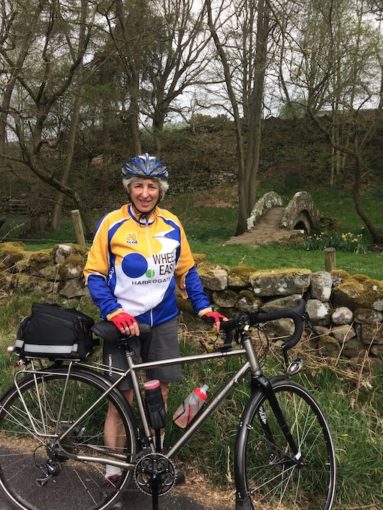 We had a fair turnout at Low Bridge, weather forecast very good to late afternoon ?
Initially we had an 80% Dave`s turnout good things can`t last forever, however we were joined by Theo, who we were all pleased to see out on his wheels.
Wetherby was chosen for caffeine and chat, then take it from there for our final destinations.
Away we went to give it a blast at various speeds according to various factors, well we all tried and why not.
Lots of chat and a team photo.
Away went the “A” team leaving Dave P1, Nick, Norman and Theo.
Norman and Theo headed back almost the way we came, Dave P1 and Nick headed for the Sicklinghall Ridge via Linton and at Kirkby Overblow took the ridge land to Snape and the A61 roundabout which seemed empty of traffic ? but nice, then to Burn Bridge with Nick taking a right and heading for Bilton.
Nick finished up doing more than he originally intended but improved in performance and enjoyment as he went along.
Good to see Theo out on his bike, he has always been competitive in taking on people and rides, and that applies to what else comes his way.
Dave P1.

A large gathering of Wanderers set off from Hornbeam, I took a group of eight and Mike followed with another nine. Down across the Stray to Claro Road, over Dragon Bridge and onto the Greenway. Picking up Mike Pyle at Bilton Cross and promptly losing him to a puncture. At Ripley we met the road chaos of long queuing traffic as NY council were repairing the roads for the Tour de Yorkshire. At Ripley the two groups came together but seem to have grown larger. A faster group were going ahead once we had the group photo taken in Hollybank Woods to admire and photograph the bluebells. Seven riders set off to go slightly faster and this left a group of nine to follow. Along the road and down to Birstwith and onto Darley, slightly overcast but a glimmer of the sun as we cycled on to Dacre. Once we turned left we hit the hills and everyone managed them as we climbed up to Greenhowhill road. Going across the top of the road were the faster group who had taken an alternative route and we merged together nearly. Mike W had a chain issue but no major problem as we headed down Meagill Lane to Fewston Farm shop. The first group had just got in and ordered and our group decided to eat ‘al fresco’ as the day warmed up. Everyone was soon served bacon butties, beans on toast, teacakes, scones and cake consumed the merged groups split into the faster group who set off first. Mike took the rest except for Liz and Corrine. Mike went via Swinsty, Little Almscliffe, Beckwithshaw back to Hornbeam. Liz and Corrine went via Kettlesing, Hampsthwaite, Clint Bank, Hollybank wood, where the bluebells wonderful perfume scented the air, back down the Greenway to home. 36 miles and 2000 feet of climbing. Liz F and Mike S. 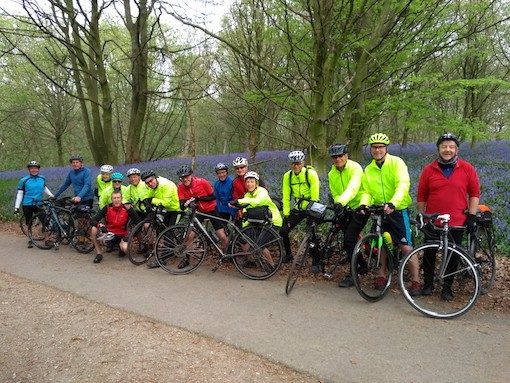 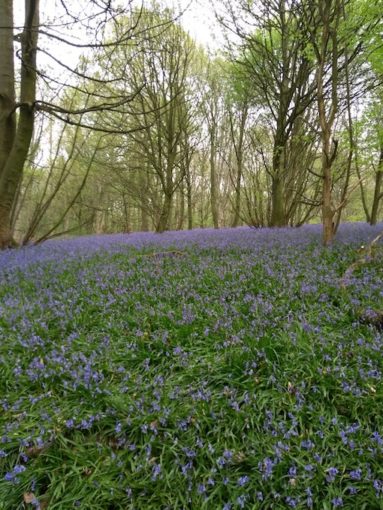 Four of us had misjudged the weather (again) and had shorts on – pushing on was the solution. So a group of seven left the main Wednesday Wanderers group after “The Bluebell photo shoot” (Vince, Mike, Tim, Tony, Nigel, Nick and Tall Tim). In truth, we settled down to a comfortable pace as the temperature rose and the hills came (and went) especially when we had to double back – always a good sign when chatting takes over from concentrating on the route. A welcome stop at the Fewston café where Chris joined us for the photo shoot and Tony got some advice on changing his disc brake pads. Off downhill all the way except for the climb up past Swinsty and Little Armscliffe leaving the group to splinter on the edge of Harrogate. 34 miles for me. Tall Tim 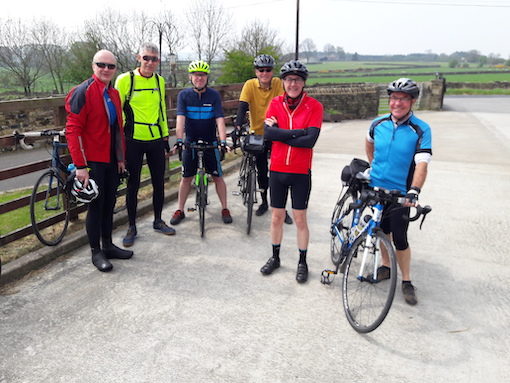 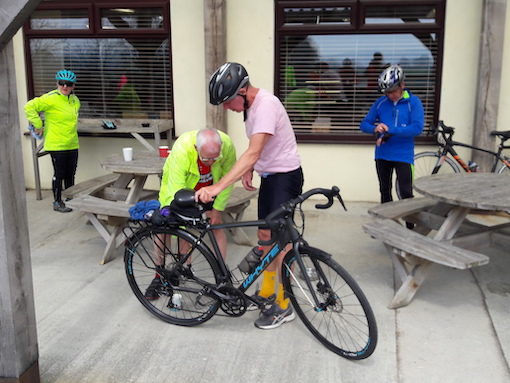