Today’s road started from Massum Square where we enjoyed warming coffee and snacks before setting off.. We crossed the river at the main bridge and turned north following the lanes through Thirn and on to Jervaulx Abbey. We rode through the park on the track and stopped to view the ruins of the romantic abbey.
From there it was on the road to East Witton and then over Middleham Moor. There were plenty of racehorses making their way down the road back into Middleton centre and we took care passing them. By now unfortunately the rain had set in and we climbed the hill to Leyburn where our group was lucky enough to have the genius of James and Kevin who suggested that we go to Tennant’s very swish cafe in the huge auction centre.
We enjoyed coffee and sandwiches and then set off in quite heavy rain making our way back through the lanes down to Masham and the cars and the car park. We were very wet by the time we returned to the cars after 28 miles. The route was very enjoyable on the quiet lanes in this area. Martin Weeks 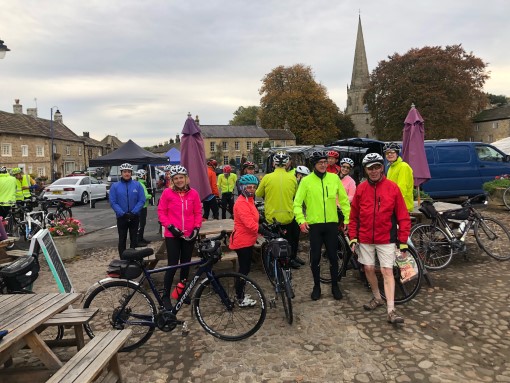 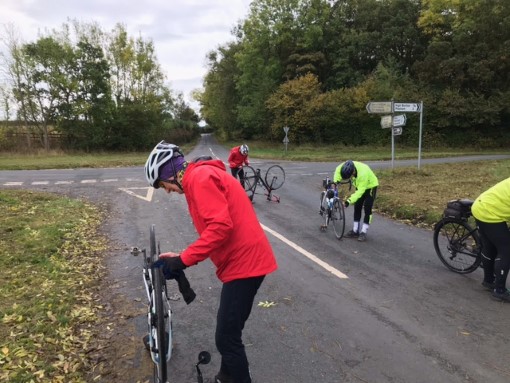 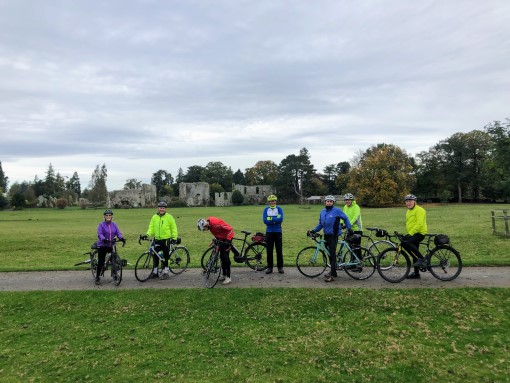 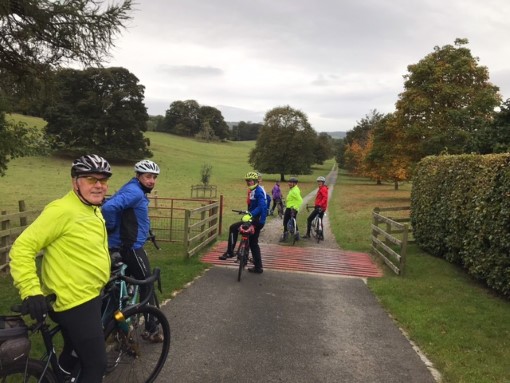 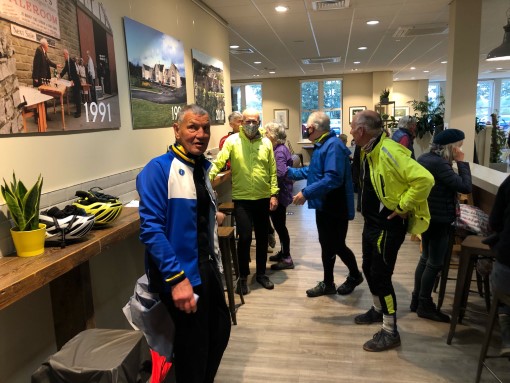 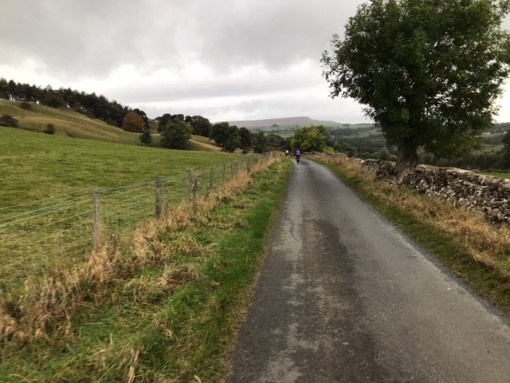 A cheerful group of ten left Masham ahead of the others as we had all arrived early. Hedge brashing caused us all to check our tyres for thorns a few miles in, where we were overtaken by the fast group, never to be seen again. We stopped to look at Kilgram Bridge, built in 1145 using a Roman paved ford as its foundations. We decided Liz F was first to cross – according to legend, the first to cross may be taken by the Devil !

Martin’s route took us through Jervaulx Park, a most attractive track which is only a footpath in law, but beats the main road every time, with good views of the Cistercian abbey. Onwards through East Witton to Coverham, with its Premonstratensian abbey ruins. Just as the Cistercians took their name from the founding abbey at Citeaux in France, so the Premonstratensians took theirs from Premontre. But not according to the ladies of our group, who decided it referenced mediaeval PMT !

Onwards and upwards (but only slightly) across the gallops to Midddleham, where Liz managed to get us all split up and lost and we discovered the public loos now require 20p. Did anyone have 20p ? Of course not. So we pressed on to Leyburn at the first hint of forthcoming rain. Some put waterproofs on and that stopped it. Into the Post Horn cafe at the top of the market place as the rain started properly, just in time to get damp but not soaked. We were given a table for ten and our very mixed orders were taken cheerfully and accurately. And it was warm and dry.

It wasn’t warm or dry when we left. Only four brave girls got off and walked down to the waterfall at Harmby, but they unanimously declared the diversion worth it. It’s better on a fine day.  The next ten miles would have been better by hovercraft. Deep water everywhere, and it was all the poor leader could do to shepherd his charges past all the signs to Masham in far fewer miles than planned. But fortune favours the brave and the sun (nearly) shines on the righteous – the rain stopped.

Without hesitation we made a deviation to avoid repetition from Thornton Watlass. A second, unplanned deviation took us a couple of miles more but along a lovely, quiet road so some didn’t notice and some didn’t mind, and we were back to Masham and nearly dry. 34 miles including the extras, a great route and wonderful company. Thanks, everyone. 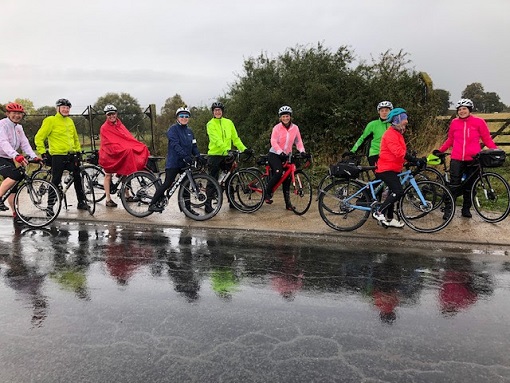 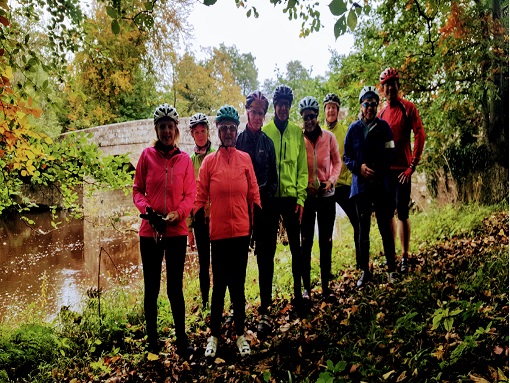 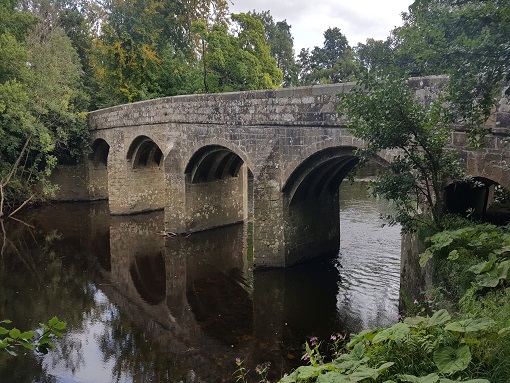 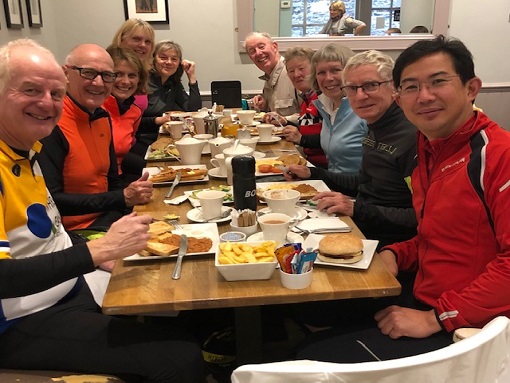 Eleven Wanderers left the showground thinking of what time the forecasted light rain would arrive? The rain held off as we cycled through Farnham, Arkendale, stopping at Great Ousburn for the photo, Alison left us here. Then on towards Tancred for the coffee stop and the rain started. Waterproofs were soon put on and we set off refreshed, the rain soon stopped with a brief spell of sun, typical! but in the distance black clouds could be seen. The very heavy rain started, producing lots of water and puddles on the road which stayed with us until we got to Follifoot, we thought we had lost a rider, but it appeared his pump fell of the bike and he went back to find it in a big puddle and soon caught us up. 33miles. Chris R. 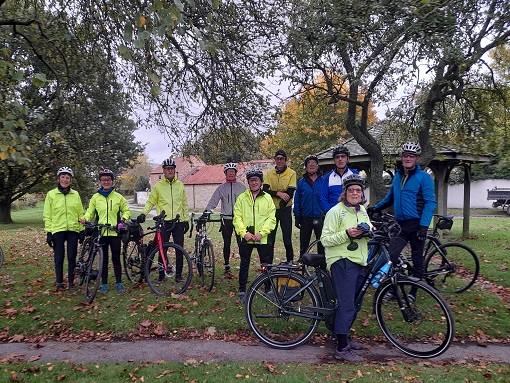