A picture saves 1000 words, they say.  Here’s one that proves it’s sometimes true.  Today’s Short n Gentle ride team of four took a coffee break at Courtyard Cafe, Rabbit Hill on A168, which luckily also turned into a rain/ hail break.  The key feature of this picture, however, is the sight of Dennis breaking a habit of not stopping for coffee.  Here he is cup in hand – a rare sighting indeed.  Kudos for the ride leader?  Maybe Dennis saw the hail coming.  We weren’t so lucky on the way back and got hit by a couple of showers.  Back to HG for about midday after 22 miles.  Many thanks to Diane, Dennis and Brian for joining in and a particular “well done”  to Diane who sailed through the several challenges of the ride with credit. 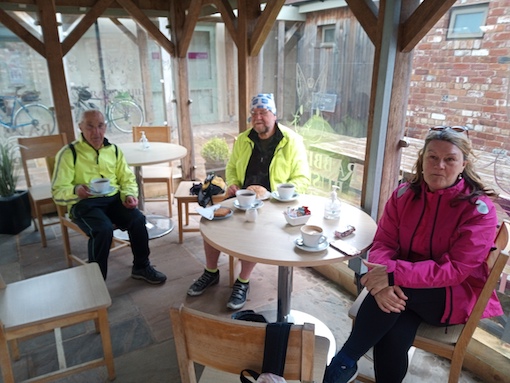 A group of 10 people, 6 girls and 4 lads, set off from Showground. A cool start, cycled up a few hills and warmed up! By the time we got to Jewitt Lane, Collingham it was quite warm. Some beautiful views and some good banter on the way. I think everyone had a chance to lead and back-mark. On to East Rigton, Bramham and ended up at Thorp Arch for lunch. Sat in the Conservatory and got rather warm! Set off for home at a steady pace to Rudgate, Cowthorpe and Spofforth. Back to Showground. Thanks to all for a very relaxed ride and good company. 43-ish miles and a few hills. Well done to all. Mike W 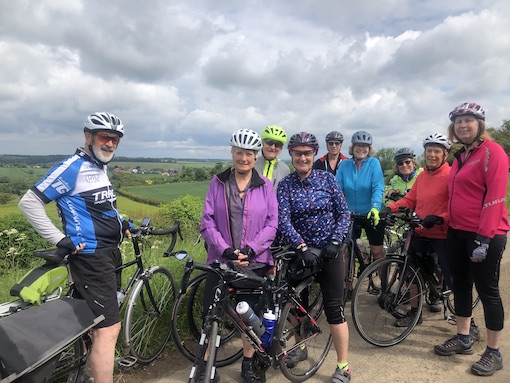 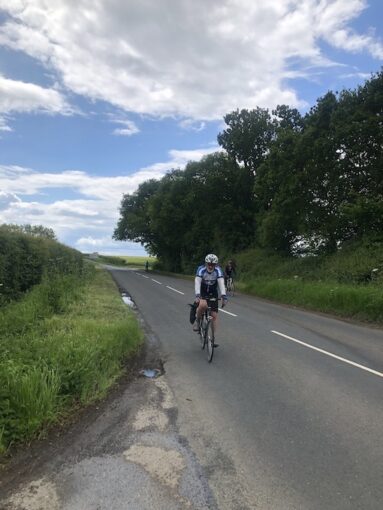 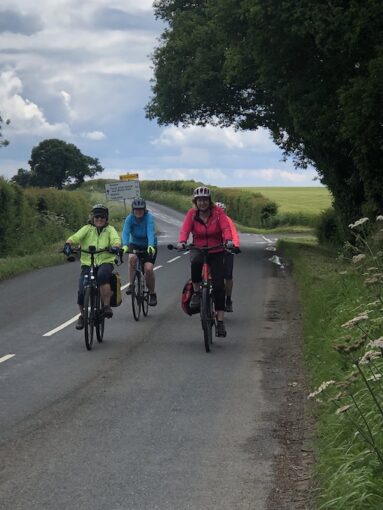 Nine of us left the Showground heading for Pateley via Brimham and made our way across the Toll Bridge and up Stripe Lane to the Rocks where John, Stuart and Maris left us to return home. The remaining six (Gia, Kevin, David, Tim, Richard and myself) sped down to Fellbeck and then worked hard to gain the top of Dallow Moor, with half the group under their own power working harder than the other half with some electric

️assistance! The views from the top were as good as usual and we stopped to admire the full extent of Nidderdale laid as we started to descend into Pateley. Having received dire warnings from the grandfather, father and mother the group descended carefully into the town and into Wildings or rather onto their outside patio. Fortunately there were no strict vegetarians among us to take exception to the amount of bacon in Tim’s sandwich and Richard managed to demolish a huge piece of cake and still get back on his bike. We returned speedily down the valley to the Toll Bridge, where Richard inadvertently  took the direct route home and the rest of us headed through Birstwith and along the Greenway. A lovely ride with great company and only one short shower, despite the forecast. A little over the advertised price at 40 miles with plenty of climbing and an average of almost 11 miles an hour. James G. 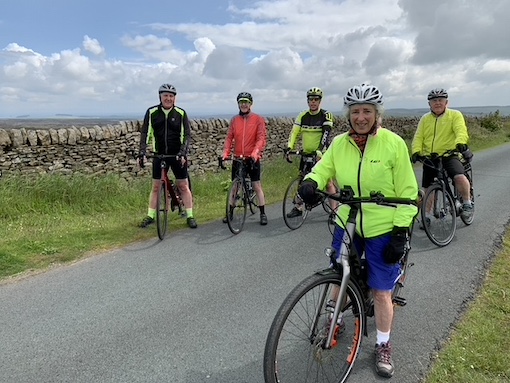 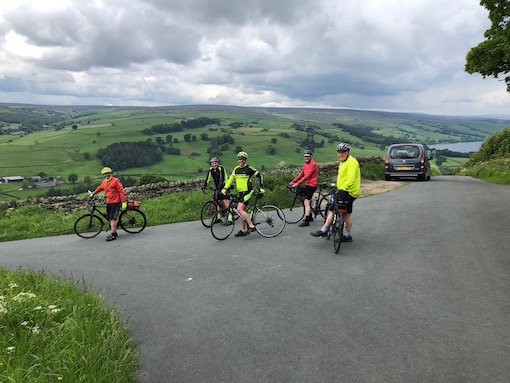 Quite a large group left The Showground and so we split into two groups as per Wheel Easy protocols – Helen, Zoë, Michelle & Janet left at Fountains leaving Mark & Julie to wiggle up to Dallowgill Moor. Behind them another group of Tim No. 1, Richard, Martin, Andy & Tall Tim were making their own way up whilst admiring the oyster catchers watching us from the dry stone walls. And it was lovely on the moor – little to no wind, fabulous views & a decent temperature. All seven came together at How Stean after it transpired that Mark & Julie had detoured down to Pateley so that they could go up Silver Lane. Madness.

The usual good service at How Stean was missing probably due to the café being rather busy – and when we did emerge the rain was coming in & the temperature was rubbish for the first day of June. No matter, we all decided to climb Nought Bank Moor to warm up & then the group split into a number of factions depending on the preferred entry to Harrogate. By now it was pouring & the last few miles were wet ones. 54.5 miles. Tall Tim. 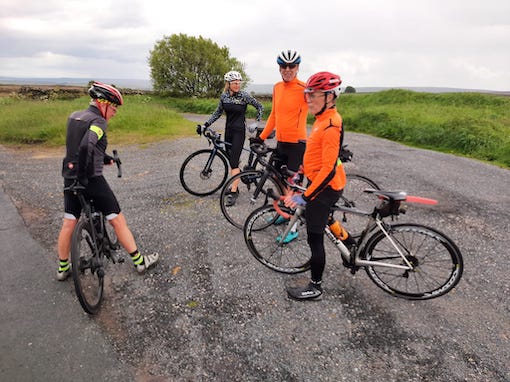 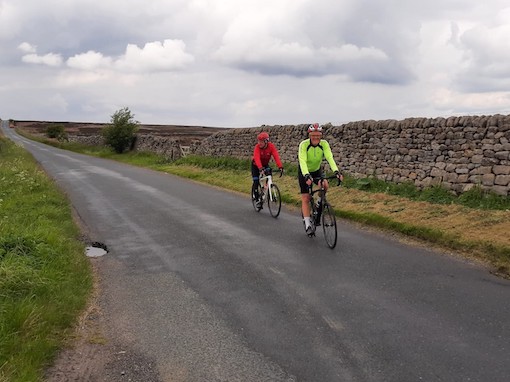