Five of us jumped off the 36 Bus at Quarry Moor Park. Four were walkers and Yvonne decided she wanted a run. So, she ran the route and reappeared at various times – she was easily spotted in her red Christmas Party dress. We walked via Whitcliffe Lane to the bridleway above Studley Park and down across the field with a large herd of red deer to the Studley Park lake where we enjoyed a picnic coffee and tea break. Continuing through the park we were entertained by two aircraft doing high altitude stunt flying. Then we followed down footpaths and roads to Ripon and Spa Gardens for our delicious lunch. Thank you, Karen, Maggie, Charlie and Yvonne, for your company. A good walk of just over 5 miles. Martin W 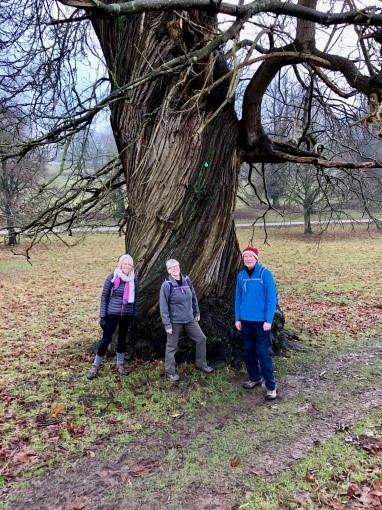 A group of nine Wanderers with seven bikes and a tandem started from Hornbeam and went via a very muddy Greenway to Ripley, Hollybank Lane, Clint and Burnt Yates to Brimham in good weather for this time of year dry, no wind and no fog on this route. Of course, the leader was panicking about time but we continued as planned up to the Ripon to Pateley Road, Sawley Moor Lane and up to Fountains by 11.40 which gave us ample time for a coffee at Fountains. Then it was down the deer park and to Spa Gardens for our wonderful lunch, feeling that we had earned it. It was an effort getting back on the bikes, back up the deer park where we did spot a few deer and on past the Travellers’ site, up Watergate Lane then down to Ripley and home before dark. It was rather a hilly ride especially after such a big meal. Thank you to Chris who is such a brilliant back marker and everyone for their company and support. The leader never did get to the front to lead the ride! About 40 miles. Liz Pugh 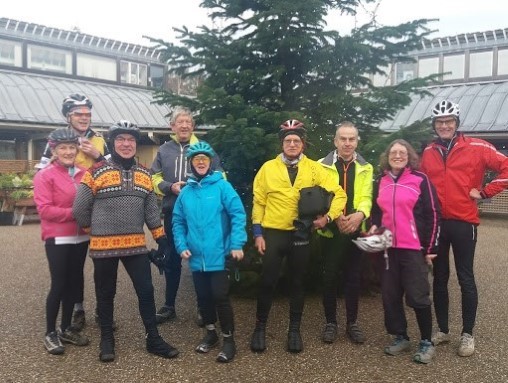 With the lunch at Spa Gardens on our minds ten riders set off from Spa Garden to do a short ride to get us hungry for what we knew would be a splendid lunch. Colin had planned a short, but hilly route and the weather was cold but there was reasonable visibility. We rode out of Ripon and climbed to Galphay and on to Laverton and towards Kirby Malzeard where we headed towards Ringbeck on a loop towards Grewelthorpe and coffee.
There were two incidents – the first being a hold up when a large number of cockerels were across the road and then when Kevin sped off down the hill towards Masham! His face was as red as Santa suit as he re-joined the group on the official route.
Coffee in the community cafe in Grewelthorpe warmed us up before we sped down into Ripon in a perfectly timed ride which left us time to walk to pack our bike away and walk to Spa Gardens for a delicious and well-earned lunch.
Thanks to Colin for the route and all those who joined and also to Paul Tindle for organising another excellent Xmas lunch. 21 miles and a 3 course lunch! Kevin 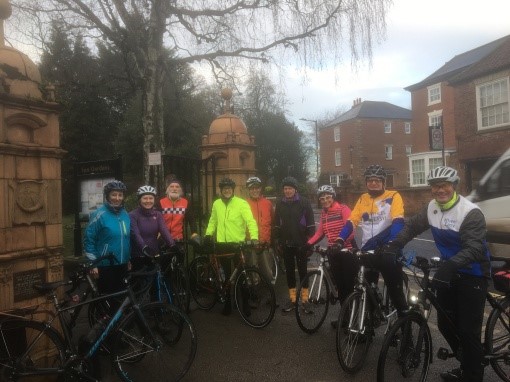 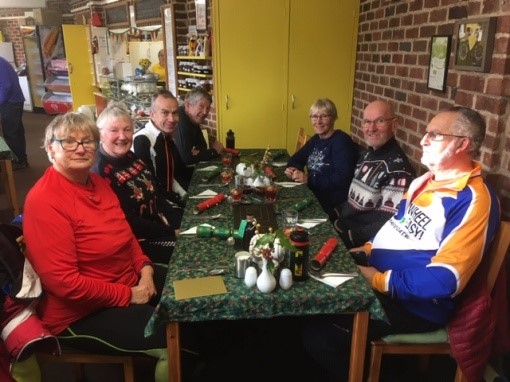 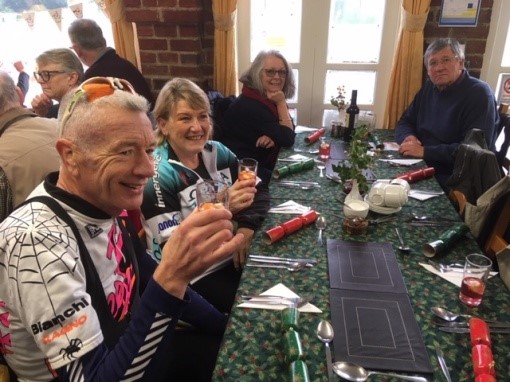 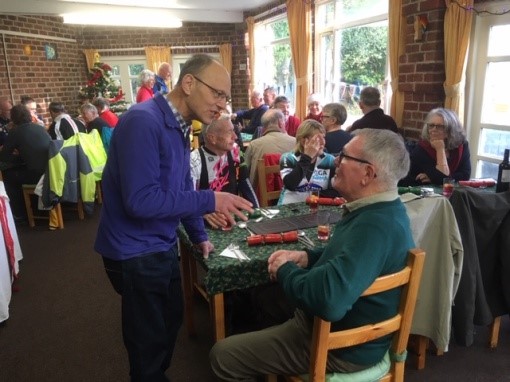 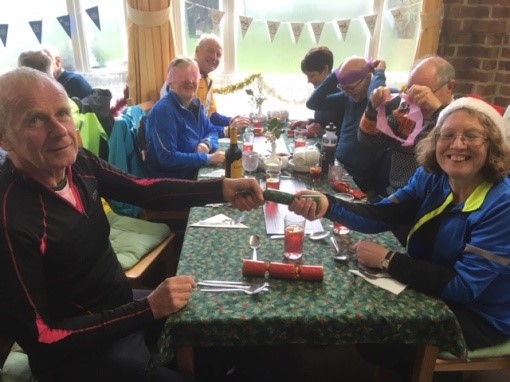 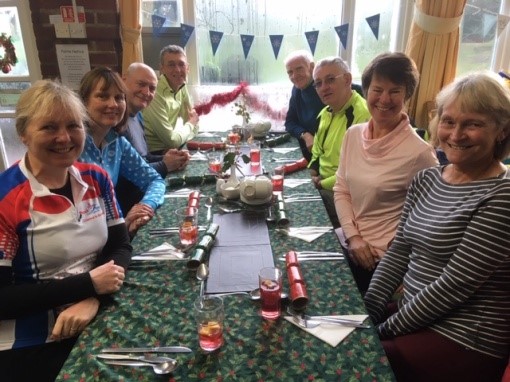 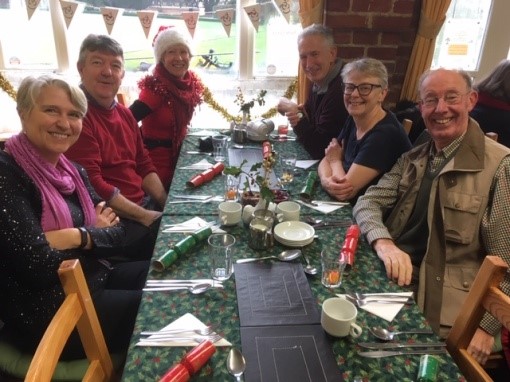 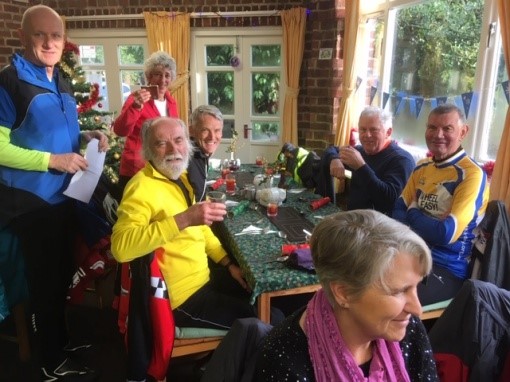 Terry S had organised a ride to get him to Spa Gardens in time for the Christmas dinner. The route was a circuitous one to Boroughbridge via Marton-cum-Grafton, with a refreshment stop at Lister’s Farm Shop. After losing a couple of riders we all met up at Lister’s where six riders shared a very small table. We then set off for Ripon going via Morton-Le-Moor and Sharow. Most of the riders made it to Ripon. Those not partaking of the Christmas feast headed back to Harrogate. PCJ 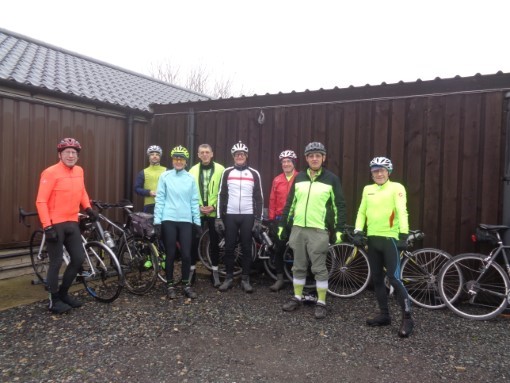 We had a good turn out at Low Bridge, but how many I am not sure, as my fingers were too cold to count on. A southerly direction was suggested (a good call), however due to people’s requirement this was changed to Boroughbridge as our first stop. Unfortunately, Colin P punctured at Low Bridge which needed Theo`s long pump. We were now well on Eric time, but Eric had been on Waterside before anybody and also had a cup of coffee, stop this Eric you are confusing us, and that`s easily done.
Away went the “A” team together with a much slower “B” desperate to keep their numb knees moving slowly while Theo and Colin P caught up. Then away went Colin P to haul in the fast guys, the remaining five riders Dave P, Dave W, John R, Norman and Theo headed for Boroughbridge and Morrisons Cafe shrouded in a cold mist from the river.
As we entered the cafe the “A” team exited (was it something we said? we have not been thrown out of a cafe for sometime now. The conversation at table today was somewhat different instead of putting the world to rights, centred on men`s “things” and the application of medical devices and embracement, we were then joined by Peter B who fortunately missed most of this and he was able to eat his snack.
Eric and Norman then headed for Ripon, Norman being on a “Freebie”, which appeals to those of a Scots and Yorkshire upbringing. However, another rider, who shall be nameless, but is elderly and of a Yorkshire upbringing had a free (but illegal ???) cup of coffee) Theo remember action first, then enquire if OK, no it was not Theo who got the coffee.
Dave P, Dave W, Peter B, John R and Theo headed for home in sunshine and a few degrees warmer.
A short but super ride to lead us in to Christmas. Thanks to you all for your company and have a good one. Dave P. 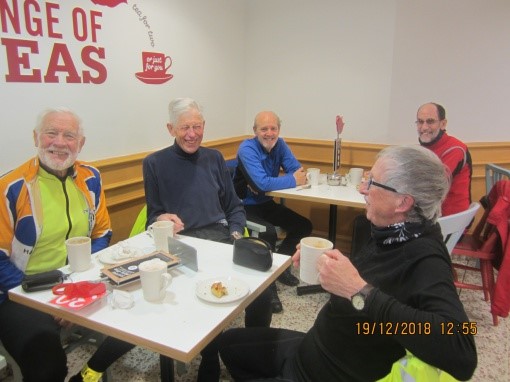