You missed a lovely ride. Five Wanderers met at Hornbeam this morning. No-one else was there – no Poddlers, no Wednesday Riders, no Long Riders and no announcer – just Mike C, me, Liz P, Mike W and Tim R. The forecast had not been good but it turned out to be a dry day after the first half hour.  There was a bit of drizzle in the air, but nothing to spoil the day.

Mike C had chosen to share his significant birthday with the Wanderers on this ride which Mike chose and led. The mystery café at Bramhope was his house. It’s a shame more of you were unable to come because the spread was enormous and unexpected. So we toasted Mike’s birthday and spent a very pleasant hour in the conservatory. This is the first cycling café I have been to where they took my coat and dried it out before I left. Many thanks to Mike’s wife, Eileen and daughter, Anna for putting on what was billed as coffee but was definitely lunch. And we were treated to a ditty on Mike’s bass tuba. As always the banter was varied and funny. A great day out, thanks Mike.

Distance 33 miles Height 795 metres (yes it was hilly). Average speed 8.94 mph (and the record marathon runners can come in at 13mph!) 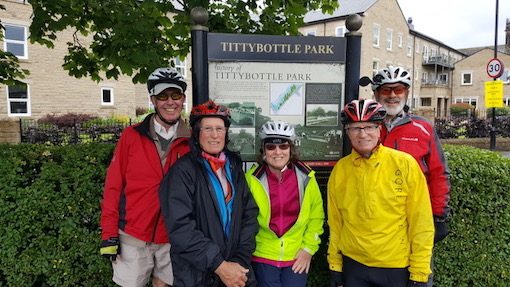 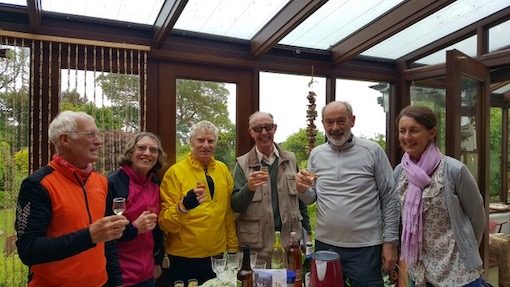 Colin and I think we lay claim to being the official Wednesday Ride being the only riders to meet at Ripley at the published time, although Paul and Martin made it to Sophie’s apparently! With no other arrivals from Hornbeam we set off to Pateley Bridge via the low route of Hollybank Lane, Birstwith, Darley, Dacre & Summerbridge working quite hard on this cool drizzly morning.

Glad to leave the main road, we took Glasshouses & Bewerley route opting to stop at Wildings as coffee was the main requirement for us both this morning, but cheese & bacon scones were a delight too. Set off back via Bewerley and Glasshouses, would it be Brimham, could Colin resist? Yes he could, the clouds were looking a little low so decided to return via toll bridge, Birstwith and Hollybank. We luckily encountered no more than light drizzle but that was pretty constant although not too wetting. Thanks very much to Colin for turning out as I was determined to do a ride today and grateful for his company. Alan S