After changing the route from a high level one, I thought this ride may also be cancelled when cycling to Hornbeam through the frozen slush on Hamilton Avenue to find I was the only one there! After a while a few riders turned up. Six hardy Wanderers were ready to set off, James also joined us and then the Magnificent Seven rode off towards the darkening clouds.

We agreed to monitor road conditions and change the route if needed. We carried on at Kirkby Overblow, the road was good and the dark clouds were going the other way, the sun felt warm, out of the wind chill. Sharp eyed Mike spotted a Kingfisher on the pond going through Sicklinghall, he also spotted a Kestrel. We discovered that the memorial of the Battle of Bramham at the side of the cycle path is no longer there. We carried on up the lane to Headley Hall, Tim R had mentioned it was the site of a WW1 Aerodrome, so we went down to lane to have a look. The aircraft hanger is still there, now a listed building and have now done a google search and found some old photos. More info on this link:  http://www.historicbramham.org.uk/folder3-b.html

After our history lesson it was down Rudgate to Boston Spa for coffee at the village hall. When we reached the Wetherby cycle path the wind got a bit blustery with a heavy sleet shower, at least we were sheltered by the trees. Then on to Little Ribston were James left us and then we cycled into the headwind to Spofforth, Follifoot and then when at the showground another sleet shower. It did turn out to a good ride, good road and weather conditions. 37miles. 2,060 ft of ascent. Chris R 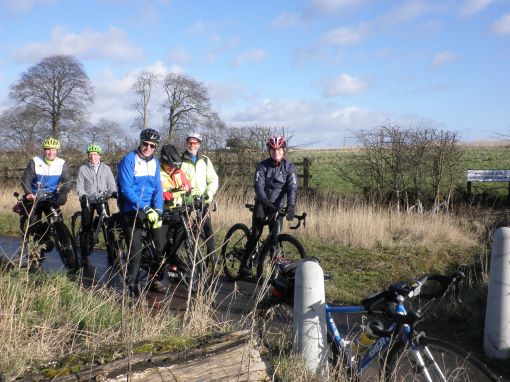 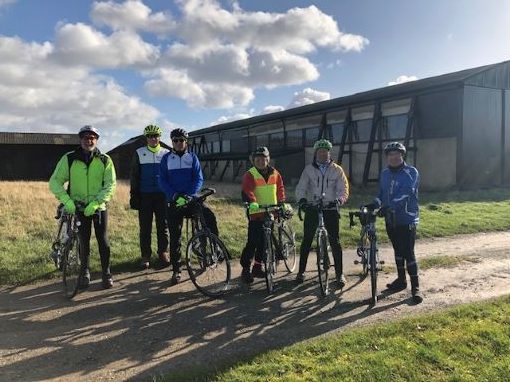 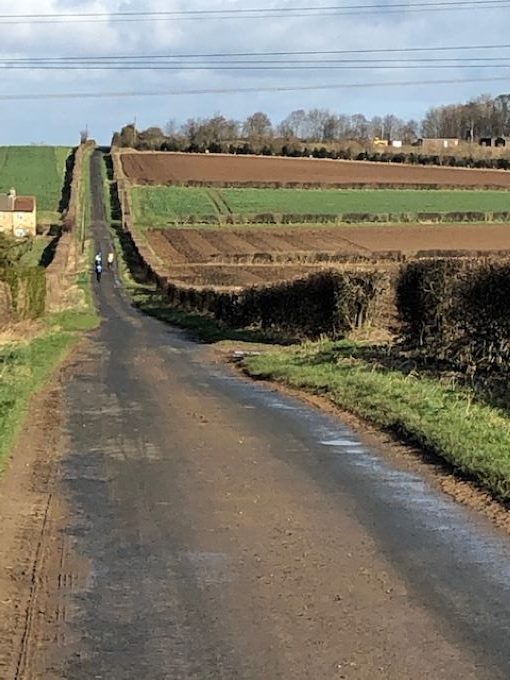 The legacy of the weekend’s bad weather and the threats of ice and wind today reduced numbers at Hornbeam to a handful.  The long ride mustered a mere twosome, Graham and self.  Nothing gruesome, however, except for the brutal westerlies which we couldn’t avoid in a couple of mercifully short sections.

The route plan was N-S to keep the wind at our flank for the most part, carving a “north circular” around Ripon.  Starting with a tail wind out through Knaresborough to Boroughbridge, progress was brisk along roads chosen as they were either treated or dry.  By the time we’d cleared Boroughbridge the threat of ice/ slush from wintry showers overnight was gone and the wind proved to be our ally as it dried the roads very quickly.  It was clear from retreating muddy puddles at the bridge roundabout in Boroughbridge that flooding had occurred and some of the minor lanes were still subject to ponds at the side, but nothing too serious.

More serious, however, was the hefty headwind we had to negotiate from Dishfoth airfield to Marton-le-Moor, a dose that was repeated from Rainton across to Melmerby a little later.  A village hop followed from Melmerby to Wath and then West Tanfield which gave some on/off shelter and allowed some of the jelly in my legs to firm up.  Passing through Melmerby we spotted signs at the village hall for a pop-up cafe, open Wednesdays 0930-1130, which might be worth a call-in.

Less doubt surrounded our lunch venue, thanks to Graham’s advice.  This was “Little Beans” http://littlebeansplaycafe.co.uk/cafe/ at the site of a cafe that appeared for the Tour de France in 2014 but closed a year later due to the family’s farming needs.  Daughter has taken it on again and plans to open 7 days a week in the summer.  Pubs apart, there’s very little else in the area apart from take-outs at the village shop.  The beans were good, if not of Siswickian proportions, and a bacon sandwich went down well across the table.  On arrival, a casual and, perhaps, tactless remark that the bacon smelled good was greeted by a grunt from the neighbouring barn – full of pigs!  Apologies were tendered on departure – I pleaded beans!

Having debated a possible extension to the ride to return via Kirkby M and Fountains, we stuck to the original route back via Ripon, Littlethorpe and Sandy Bank where Graham headed for home via Ripley and I took the route through Knaresborough.  Sunny for the most part with great views across to the N York Moors a challenging but enjoyable ride concluded by 3.00 pm after just over 50 miles – another bonus, for this week in particular. Terry S