Excuses and notes from home for all Poddlers.  I enjoyed a very short burst of very exertion, accompanied by a police outrider to Kirby Overblow via Burn Bridge and back via Rudding.  The day was glorious and some of the views amazing.  How lucky are we…to quote a very wise friend.  Thank you Surjon for your company. CG

Fewer people at Hornbeam this morning, was it festive commitments keeping them away or was it Liz’s F hilly ride!! Thirteen plucky Wanderers took up the challenge to go for ‘them thar hills’ burn off a few calories ready to tuck into turkey and mince pies in a couple of weeks. Weather dry, not too cold or icy Liz led the first group off and Chris followed with the second group. The Sustrans Rangers had been out clearing the far end of the Greenway, many thanks to all who carry out this great work, unfortunately the overnight winds had brought down lots of little branches and twigs onto the cleaned path so caution was required. Reaching Ripley I rounded up the troops and no deserters reported. First hill Scarah Bank and then the long drag up Rabbit Hill to Brimham. It is a lovely ride with great views and often we do this ride the other way round, a first for Steve who was really enjoying the ride with a difference. Along past Brimham Rocks where Alison and Liz P left for an early bath. At the crossroads we went straight across down a steep and tricky descent (not many descents today) to Summerbridge, straight across to another hill climb to Dacre Banks and Dacre. A few mutterings about ‘leaving glove marks round my neck’ and ‘who put all these hills in’ as those hills kept on coming! From here on it was mostly up and up, Dacre, Lane, Dike Lane, Braithwaite Lane and Sandy Gate. Mike W tried to head for an easier route to Fewston but a few lashes of the whip and he returned to face Liz and her hills. It did ease a little bit as we went downhill past Stonehouse and turned onto Meagill Lane. .A quarry lorry coming towards us, was going so fast it shot past, spraying mud and water over me and with cross winds I wobbled and it took all my strength to keep from falling off, unfortunately Tim ended up on the grass after slowing down and caught the back end of the bike in front. Fortunately he fell on to his undamaged side and hopefully escaped any injuries. Everyone was now ready for refreshment, carefully onto the A59 and into Fewston Farm café. The farmer thought we were the cyclists who had ordered pie and peas, luckily we had just got in before them and was soon tucking into sausage rolls, bacon butties, soup and cakes delicious and well deserved after all them hills. A mysterious pill was found by the farmer who though it might be some pill beginning with V and was going to try it, soon found it belonged to Tim who assured everyone it was legal and just a Rennie. What with Margaret’s encounter with the police, I thought oh no it will be the Drug Squad next!  Leaving the café, Chris took five back via Little Alms Cliff, Beckwithshaw, Hornbeam and Liz took four to Penny Pot Lane where they carried on to Harrogate. And Liz turned to the A59 across down to Kettlesing, Hampsthwaite, Clint Bank, Ripley Greenway to Bilton. Thanks to everyone for a great ride out in the wintry sunshine, around 38 miles and 2,811 feet of ascent. Liz F and Chris 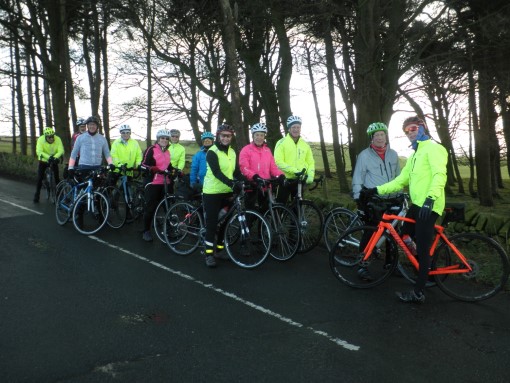 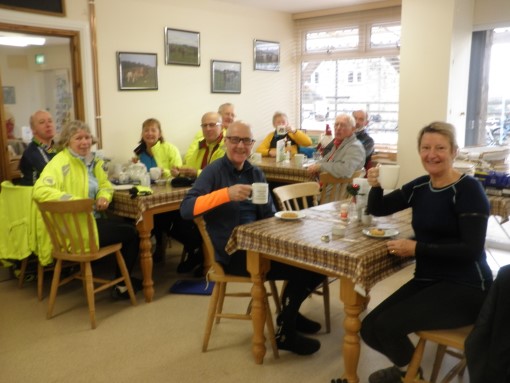 So there I was, last week, fixing my latest puncture on the Stray as you do (on the way home, fortunately) when Colette said “I think we should have a Brisk Group Christmas Ride”, so in repayment for the use of her pump I foolishly volunteered to organise it. Fast forward a few hours less than 7 days, and a hardy group of nine set out from Hornbeam in the opposite direction from our fellow Wanderers, headed for a well-known pizza emporium in Ilkley. It was a little chilly into the wind as we headed down through North Rigton and Leathley, but morale was high as there was the promise of pizza between us and the climb up Askwith Moor on the way home. Various suggestions for alternative return options were firmly resisted, and we arrived without serious incident at Pizza Express in Ilkley just after it opened (other pizza providers are available). We soon warmed up and ordered mostly pizza and mostly coffee – one or two people might have ordered wine but the less said about that the better. What were they thinking? Much jolly banter was exchanged between mouthfuls of crusty dough and Colette showed her excellent grasp of the French language as our waiter was from somewhere in central Europe and had a distinctive accent. On leaving most of the group spent a considerable time waiting outside in the cold for no apparent reason before we all set off to warm up with the aforementioned ascent of Askwith Moor. With a tail wind. Fortunately, nobody died. There then ensued a terribly non-British outbreak of effective democracy as we amended the planned route to avoid the Snowdon Crag loop by staying on the main road and wound our way back via Timble and the short climb up after Fewston Dam (with only minimal swearing). Penny Pot Lane seemed a breeze after that and 9 happy riders rode into Harrogate and filtered off in their various directions in the time-honoured fashion. It would appear that this will now become an annual tradition. About 38 miles and 3800 ft climb.  Merry Christmas!  Vince

(PS. A special shout out for the hard-working ride reports team without whom you would not be reading this, although you might consider that an advantage in this case.) 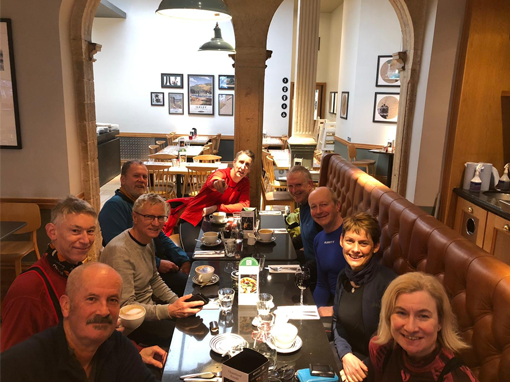 Wednesday group headed for Pool via Brackenthwaite Lane and Leathley to Farm Shop to meet up with Kevin. Kevin is recovering well and pleasant chat ensued. Hilly route home via Jack Lane brilliant views and worth the effort.  Sue C. 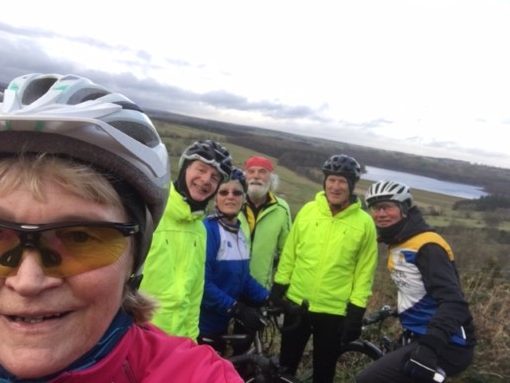 A respectable turnout today for the Long Ride – seven takers for an excursion to the “deep south”, aiming for lunch at Lumby Garden Centre (adjacent the former Selby Fork Motel).  Unfortunately, the ride got off to a bad start when an unscheduled route deviation through Pannal instead of Burn Bridge resulted in two of our number losing contact and deciding to go elsewhere.  Another lesson for the ride leader and my apologies to the two concerned.  The remaining five headed for Linton and Collingham via Kirkby O at a fair pace until Andy pulled up with a flat front tyre outside Sicklinghall.  At Andy’s insistence we carried on as he intended to leave the ride early anyway.  Reassuringly for the ride leader, the two riders lost at Pannal caught up with Andy and they continued their ride together – a lovely irony. At Milners Lane near Thorner we hit a road closure which we were confident we could get past, because we usually can and there was no sign of any road works activity.  This was a different kettle of fish, however, and required us to nudge aside some barriers and pick up some mud in cleats and brakes.  On balance, it was preferable to a long detour on A58 but rather mucky.  The group accepted the offer of an early coffee stop at Arium near Thorner and the warmth was certainly welcome.  This set us up for a quick ride to Garforth against the wind, from where we experienced more roadwork delays in getting through Kippax on the rather busy main street.  Once across Roman Ridge Road the roads were thankfully quieter en route to Fairburn Ings and Fairburn village itself.  Here we paused to absorb some local history about the coal mining of the area and the curious stone spindle in the village.  Despite delays, Lumby Garden Centre cafe was reached by 13.15 giving time for more than a cake stop, including a fix of Peter J’s rear wheel issue.  The cafe was surprisingly full, the main clients being grey-pound spenders just like us!  Quick service and careful menu choices got us away from the cafe in good time despite the “inconvenience” of the sole external WC on site.  I hope they will remedy this big minus sometime soon.  For the return leg of the ride – effectively a charge north up the old A1 – we had the benefit of the wind which was at least not a hindrance if not a benefit.  Nevertheless, there were many sheltered miles alongside A1M so that a mere 50 minutes after leaving Lumby we were in Wetherby. At North Deighton farewells began with Peter J opting for Knaresboro’ and after Spofforth Peter R heading for Pannal, leaving just two “survivors” to make it to the Showground and home.  A 60-mile ride on a bright sunny if cold day in December can only be described as a bonus and despite the several frustrations of road closures and works, we were back in HG well before dark and even before the after-school rush.  A good day.  Terry Smith