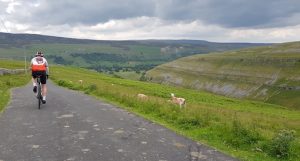 Three met at Hornbeam at 8.30 for a long, hilly ride to Settle.  A fourth was due to join after a mile or so, but didn’t appear, so we took a detour and rang his door bell.  He was still in bed, but achieved an impressive feat of being ready to leave in nine minutes flat.  Eric said he would catch us up having first sought divine inspiration.
Peter J left us appropriately for Jackson’s cafe at Cracoe before looping home via Skipton, and Eric caught us up at our cafe stop in Airton.  At this point we concluded that Settle might be a bit much for our collective states of fitness and decided to take a short cut via Malham Tarn and over to Arncliffe.
Malham to Arncliffe is one of the best roads in the Dales, but does involve two sapping climbs.  Further refuelling was required at Grassington, followed by a second short cut via Grimwith rather than Appletreewick (saving three miles but requiring the slog up past the reservoir).
Duck Street was welcome relief, but we were then forced into a long cut due to the closure of Penny Pot Lane.  So back via Beckwithshaw, finishing pretty tired just after 6pm after circa 85 miles and 8000 feet of climbing.  Still modest compared to’t Big Un next week.      RL 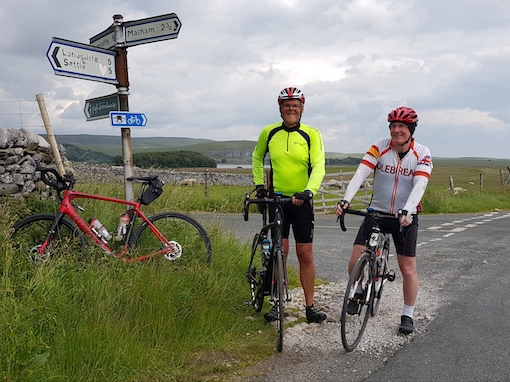 Magnificent as ever, El Butler led the Short group on a stunningly beautiful, fantastically different ride at  a perfect pace from Knaresborough to Lingerfield to Farnham to Arkendale right towards Stavely to Copgrove to Burton Leonatd and Markington.  Monica left us at Stavely to do more miles and we met a nearly lost group of medium riders being found by the capable hands of Joe.  as we entered Ripley looking forward to a pleasant coffee a rather rude woman kept telling us where to go…..along with her very small grandchild…..very welcoming indeed!.
However a really good ride of 29 miles following in the wheel of the legendary El Butler. Thank you again Dennis. CG 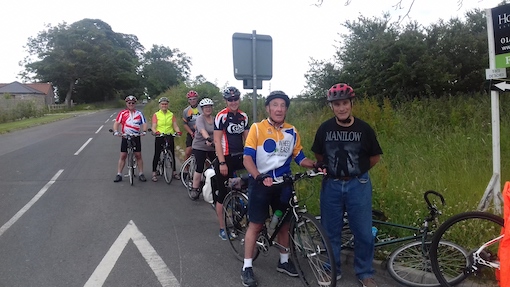 Weather forecast good, with little wind. We were 15 in total for the medium ride, but only 13 of us set off initially, as Richard had a puncture, and Martin W was helping him to fix it, saying that they would catch us up. Geraldine was back-marking…The group included several faces unknown to me (or maybe it’s my memory that’s the problem). The route was not entirely familiar to me, either, and I was concerned that I may go awry at some stage in the ride. Usual pep-talk about road discipline and keeping a good gap for overtaking, which was, as usual, ignored during the ride… Ripley, Nidd and the Mountgarret estate, in what was for me the ‘wrong’ direction. I turned left into Burton Leonard, when I should have turned right towards Copgrove, at which point Martin W and Richard had caught us up to point out my mistake. We managed to keep to the prescribed route through Staveley, Arkendale, Marton-cum-Grafton and through the Ouseburns and Thorpe Undewood to Tancred Farm, where slow refreshments and photos were taken. I managed to get slightly lost again on the way back through Whixley, but Alun took pity on me and briefly took over leading and got us back on track at Walshford, having come through Cattal. Old A1 cycle path briefly before turning left to Little Ribston, where Alun left us (of course he did, because he lives there). Spofforth to Follifoot, and then across the bypass, which was incredibly busy. Showground (already full of vehicles and caravans etc. for the Yorkshire Show) and back to Hornbeam.   About 40 miles. CPS 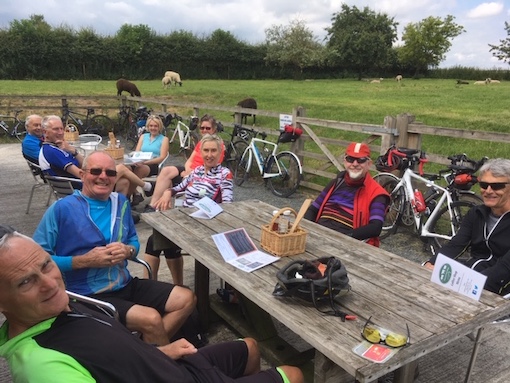 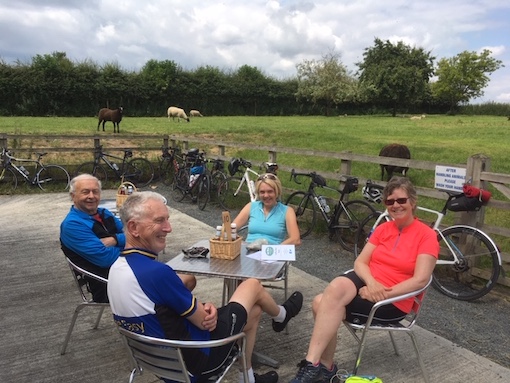 A simply fabulous ride taking in some excellent climbs (and stunning views) along the way. The weather was better than forecast with sunshine all the way to Otley, up Langbar and onto The Abbey Tea Rooms at Bolton with good food and service. Up past Embsay and then more climbing with a sharp incline out of Eastby, up Barden Moor and then Skyrholme before the long slog past Stump Cross Caverns before sliding down Duck Lane and Penny Pot Lane into Harrogate. An excellent day all round. Around 60 miles with over 4,600 ft of climbing at 12.9 mph. Tall Tim

All gathered  7 eager!! riders ready to tackle one of the harder hilly rides we do. So off we set on this dry sunny day to tackle the hills and the first one arrived fast as we climbed up Brackenthwaite lane out of Burnbridge to join high moor road into North Rigton. We soon reached Leathley village to go up Farnley Park and into Otley we passed through Asquith village reached the turn of for Langbar climbing up gave us wonderful views of Otley and Ilkley we tried to rapidly decend down to Beamsley of the top, but a Nissan Micra driver had other ideas and pulled out in front of us….joining the main rd we followed a tractor down to bolton bridge roundabout arriving at Bolton Bridge, nothing to report here only a few monks made homeless by the ruthless Henry 8th, but that was a long time ago!!! so we took coffee and refreshment at the Tea on the green nice little place and full of cyclists to.
After this we set of for Embsay and the climb up Kirk lane and Barden rd to reach the top of Barden hill and then a speedy decent down to the main road I think one or two of us were nudging 50!!mph. Quick turn left then right over the river and up the hill overtaken by a elite rider on a very top end race bike. weaving down to the bottom of the valley we reached everyone’s favourite Skyreholme and the climb up to the Grassington road and after a brief flat bit upwards again passing Stump cross caverns finally reaching Greenhow village and the right turn on to duck street lane…a brief stop to gather we set of at a fast impressive pace pretty much all the way along the street nudging 28 to 30mph.  Having reached Menwith we split as a group with some opting for more of the same average speed boosting down Pennypot lane whilst Paul and myself went back via Norwood lane and home back into Harrogate via more cheeky hills.
A harder hilly but satisfying ride.    TonyP. 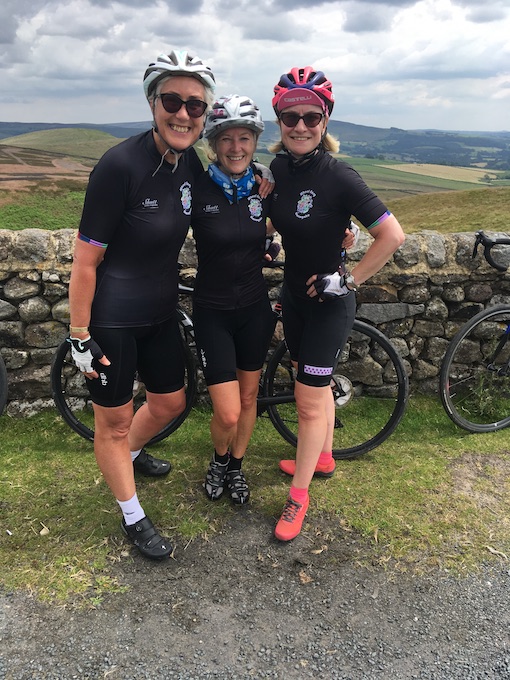 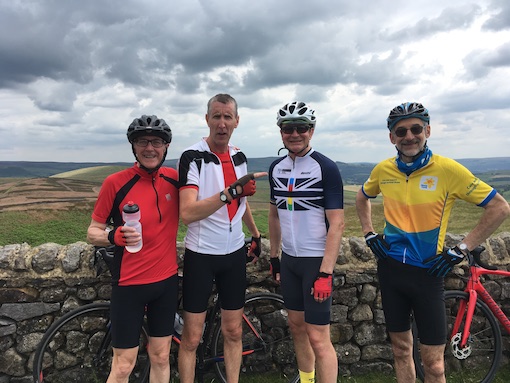 Seven joined the ride and we set off not on the original route but out to Little Almscliff, Fewston up to Timble, beautiful orchids pointed out by Colin in the verges. Meeting up with Peter and Dave Preston on the way, who were just having a meander about, aiming for Stumps Cross. Dave said on our return journey as that would be our homeward stop, could we check if he had been fossilised there and throw him over the handlebars and bring him back. A steep climb up Askwith Bank and then down to Askwith back on to the orginal route. At Ilkley a discussion about the download map had put in Langbar, whereas the WE route went straight on past Ilkley Golf Club and Neston, as lots of climbing to do later on the group decided on the WE route. The back lane was full of flowers and a little overgrown, apart from some suicidal quad bikes and motorbikes off roaders roaring past us it was peaceful and quiet. Reaching Abbey tea rooms Group 1 was already there and had picked up Electric Mike. After a good lunch, something about soft hands from Helen, causing mirth and giving Colin a fit of the giggles. The group set off and Mike joined us, serenely cycling up the hills, a few thought of electric bikes and maybe they are a good idea! Embsay and, Eastby soon passed, at Barden Tower lots of beautiful foxgloves filled a field it was quite a sight. A long climb, fantastic views, Appletreewick and up to Stumps Cross for a welcome refreshments. The size of the chocolate cake was unbelievable, Mike soon polished it off, though Colin struggled with his. No sign of a fossilised DP we reckoned he was down in the cave or at Morrison’s. On the way back Colin left and went via Darrowgill, Mike to home via Blubberhouses, Helen, Kevin, Margaret, Debbie and Bob home via Penny Pot, Liz via Hampsthwaite , Clint Bank, Ripley and Greenway home. A grand day out, a few hills about 58 miles. Liz F 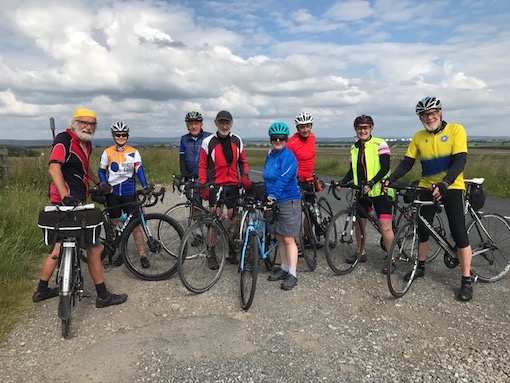 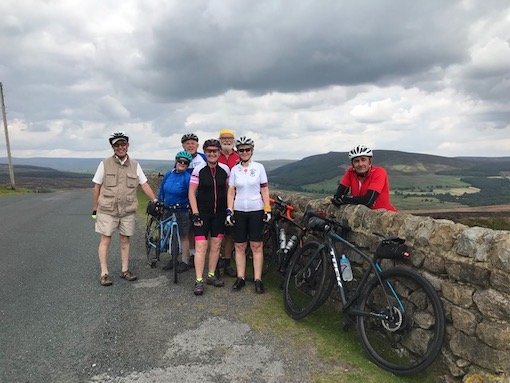