There were five riders for the short ride led by Dennis who took us via the showground and Stonefall Park then up Forest Lane onto the Beryl Burton cycleway to High Bridge in Knaresborough. We headed for Scriven, Lingerfield and Farnham, Copgrove and Burton Leonard, turning left passing the old limekilns to the ford (safely negotiated by the footbridge).

Using the Ripon Rowel bridleway we crossed Mountgarret Estates emerging near Brearton but turned right towards Nidd and 2nd right to join the A61 near Ripley. One rider needed the café while the rest headed for home using the Greenway cycle path as far as Bilton where I took the Starbeck line to Bogs Lane and Wedderburn Avenue returning to Woodlands Corner. Fabulous ride at 23miles, back by 12.30. Peter B 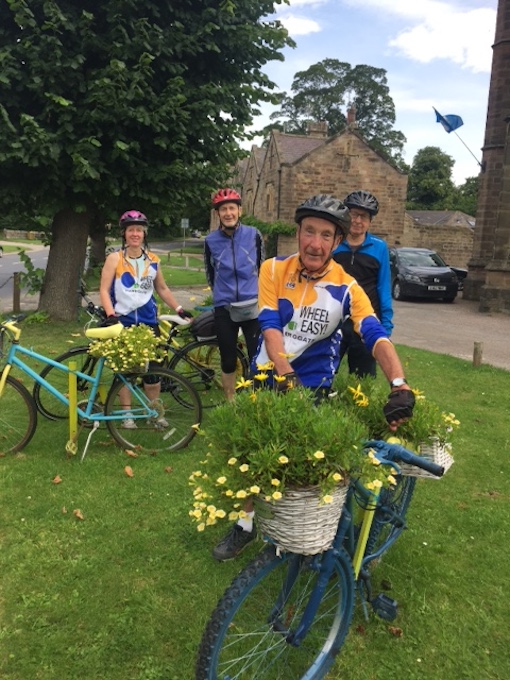 A warm and bright start to the day drew in plenty of takers for a dash out to Darley including a visitor from Marlow who’d spotted the opportunity for a ride with new friends on a trip to the area. So, eight set off and we were joined by four more at Bilton Lane on the Greenway.

Richard decided that a pending fault was best fixed by a bike change and we headed to Ripley to wait for him. Hollybank, being the first test of the legs, was the start of a set of glorious climbs as the day stayed warm and fine ahead of the forecast thunderstorms. We made our way up the grind and through Darley and then Dacre Lane had the group strung out each trying to find their lowest gear.

We waved goodbye to Mike at the Stonehouse pub and then made our way through the rolling hills past Menwith and into Hampsthwaite for a stop at Sophie’s. That being near the end of the ride we started to part ways and made our own way back on various routes. The forecast thunderstorms never seemed to amount to much and I believe all dams were safe. Thanks to all for a splendid day out and for making Chris welcome. Dave M. 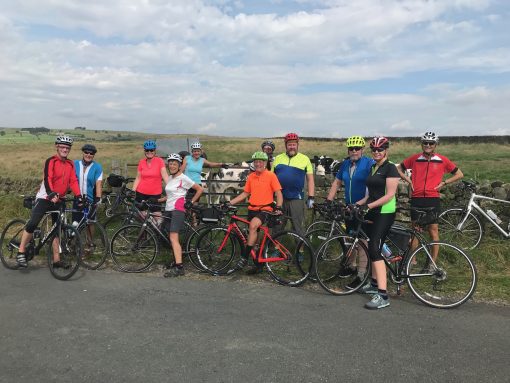 A  bumper turn out for today’s iconic ‘Jill’s hills’ ride lead to the inevitable split early in the day when the fast boys took off, creating two evenly- numbered groups.  I say fast boys, but we had a strong visitor rider, Debbie, who joined them so well done to her.  She was on holiday and had been encouraged to join us for the day and how good to know that this option is taken up.  We had another new rider, Katharine, in my group who is rather more local and I hope she will be out with us again soon.

The skills and requirements of a ride leader are many & varied and today’s skills test demanded shepherdess duties at the top of Langbar.  Fortunately, the sheep were fairly obliging and responded to a bit of herding which is about my top limit in such matters.  Ilkley didn’t seem to light anyone’s candle so we pushed on to the favoured Cock Pit Farm and took advantage of the outside space for coffee, buns and the like.  I can’t report on the stats because Garmin has had a hissy fit – again!, but all that seems rather irrelevant on such a lovely ride.  Oh, the other ride leading duty was to organise the weather to break just after we returned to Harrogate.  Thanks everyone for making it such a great day.  Helen B 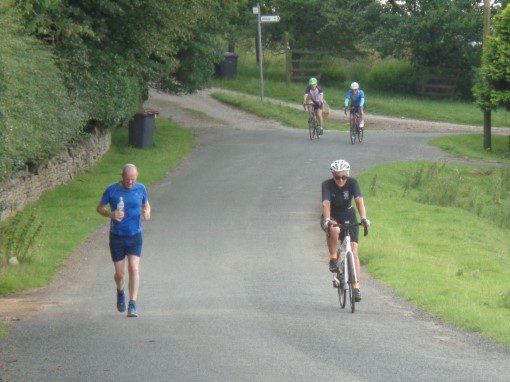 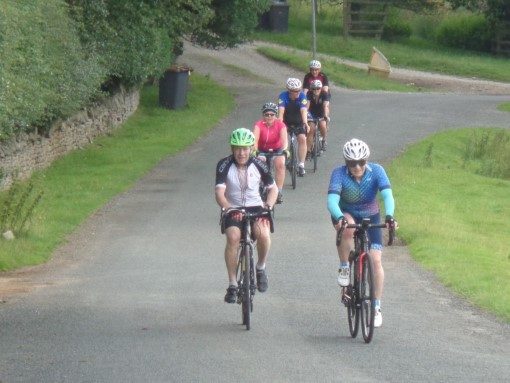 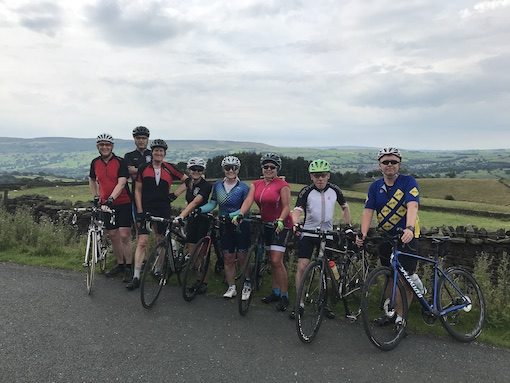 With so many people opting for the  ‘Jills Hills’ ride it was decided to split the steady riders into three groups so James, Kate, Debbie, Kevin,Paul and Gia set off towards Burnbridge. By the time we reached the top of Brackenthwaite Lane James was using his Chairmans privilege to change the route and so we missed out North Rigton and went via Lindley and the reservoir towards Otley. From there we headed towards Ilkley and tackled the climb to Langbar. There were some great views from the tops and Kate (tackling Jills Hills for the first time) took the climbing prize.

A quick whizz down to Ilkley and lunch break at La Stazione where it was great to meet up with the other two groups as we all arrived one after the other. The service was, once again, excellent and Gia was able to settle her outstanding debt before we set off back with darkening skies. We varied the route once again and headed back via Askwith. After the long climb we headed into Harrogate via Pennypot Lane and Pot Bank.

A grand day out 45 miles and 3000ft of climbing in great company and only a small shower of rain! Kevin D 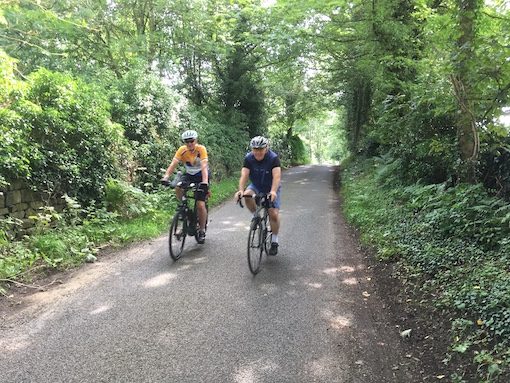 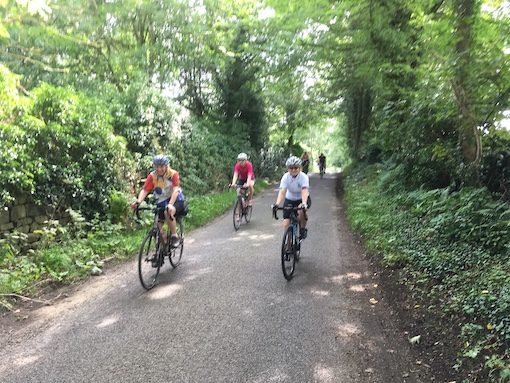 A small group of us decided to ride at a steady pace and go straight for the hills! Helen, Keith, Sarah and Martin road straight to Fewston and upwards to Timble, then enjoyed the long swoop to Askwith and completed the high loop of Jill’s Hills before making tracks for Cafe Stazione at Ilkley.  Lovely food served quickly then back via Askwith, Otley, Pool, Dunkeswick and Kirkby Overblow.  53 super miles and we missed every rain shower on the way home. Martin W. 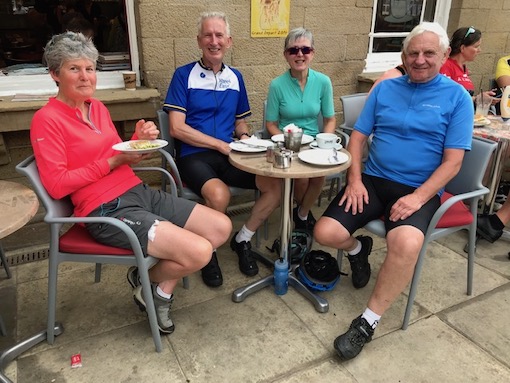 Plenty of interest in this eponymous ride Jill’s Hills. Too large a group to ride together so we split into three separate groups. It was great to see Sarah Cross back in the saddle and also Dave Siswick after his hip op.

I led seven riders to Burn Bridge, Leathley and Otley. Lots of cyclists on the road between Otley and Ilkley but fewer keen on the climb up to Langbar. Off we went up and up to the top, the weather warm and wind behind so a pleasant ride. At the summit we had Glynn on ‘team selfie’ duty hopefully a good photo. We were surprised to find ourselves behind team Gia! Somehow this team managed to find a quicker route to get to the cafe first! Never mind superb service as ever at La Stazione meant there was room for everyone to be served quickly.

My group decided on another hill, up from Askwith, as if we hadn’t done enough! Unfortunately our progress hindered by a tyre mishap on Steve’s bike. Eventually we got going again, Monica was enjoying showing off her wonderful new smooth white machine, her first carbon bike- cool. We just about kept up with her as she led us up more hills to Beckwithshaw. We all went our separate ways homeward looking forward to a warm shower and obligatory cup of tea. An energy sapping 46.7 miles,4458 feet of climbing, a beautiful ride with great company and we avoided the rain! Sue C 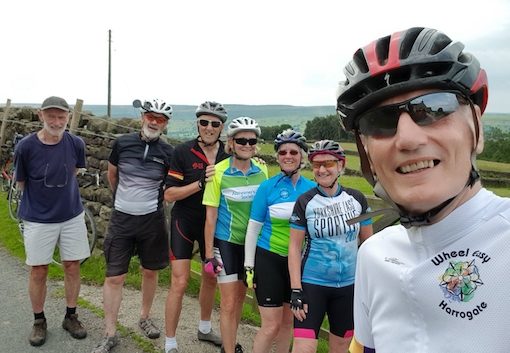 The long ride today was an 82 mile ride to Masham and exploring some of the lanes and villages north of there with cafe stops at Masham and Thorp Perrow. Eight people set off, four, Richard, John, James and Tim decided to return from Masham. Peter then decided to take a flatter route back from near Ulshaw leaving just myself, Eric and Dave W to complete the full ride.

Impressions of the ride:

There were quite a few hills especially in the first half of the ride although none of them were particularly steep. Payback was some long steady downhills on the way back. Riding some new roads even after many years of Wheel Easy long rides. Some great views. In spite of the forecast predicting thunderstorms for the afternoon we only had one very brief shower which stopped almost as soon as we had put jackets on. Definitely a route worth repeating Jill F 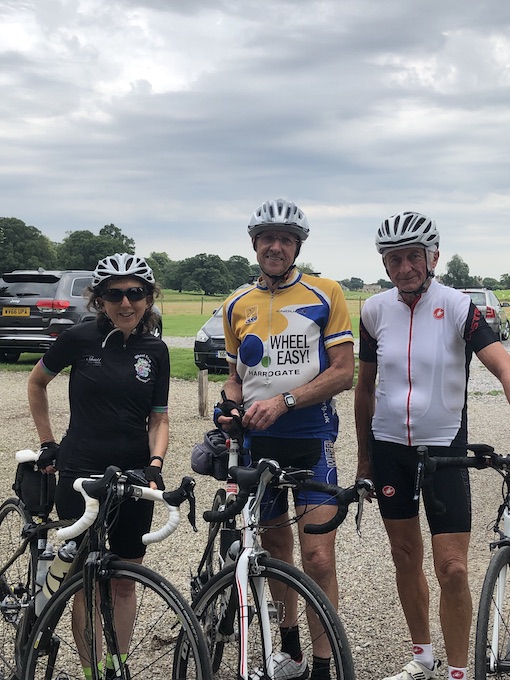