Early Sunday morning (6.30am) the sun was out and a clear blue sky, cycling shorts on, 8.30am it was cloudy and feeling rather cold in the breeze, shorts off and trousers on! A few other riders had done the same. Setting off from Hornbeam 9 riders were ready to get through the showground Flower Show traffic and pedestrians, which was not too bad at all. Then on to Follifoot picking up 2 more riders and then to Wetherby, by this time everyone had warmed up. A good pace was then set along the cycle path and road to Bramham, on to Stutton and Cawood turning left over the bridge to Naburn. Then a slower pace on the Solar Cycle Path avoiding dog walkers and other pedestrians to Bishopthorpe, stopping off at the palace. The Archbishop of York appeared not to be in! Then it was into York stopping at Cycle Heaven for coffee, bacon sandwiches, beans on toast etc. As the new foot/cycle path at Scarborough Bridge was open we tried it out. The approaches still had some work to be done, the path is wide and a little confusing on the other side as to which way to go to get back to the river path. But when it is all finished it should be easier, a big improvement, well done Sustrans! Down to a slower pace again on the cycle path to Overton, then a good pace was set towards Beningbrough Hall, Great Ouseburn and the Dunsforths. Mike W must have had some rocket fuel in him, he was way up front and missed the left turn at Aldborough, he went through Boroughbridge and then caught us up at Farnham crossroads! At Knaresborough riders split up to go different ways home, leaving 5 to go up the hill. A good flat ride at a steady pace, average speed 13mph, 66.5miles.  Chris R. 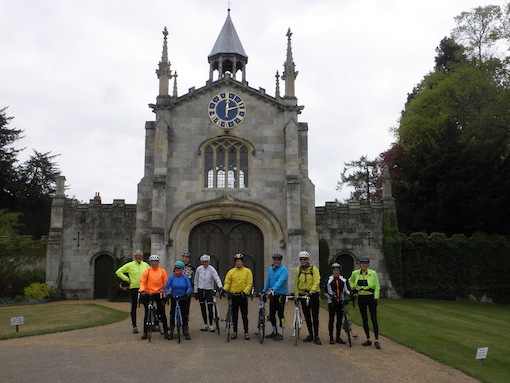 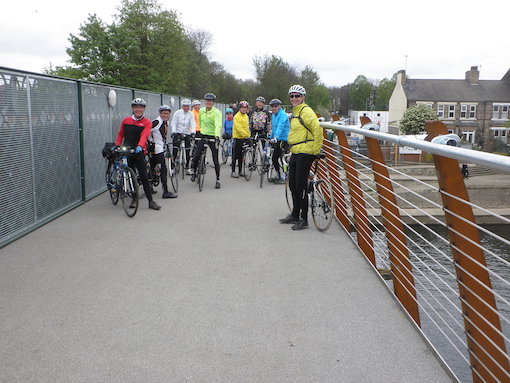 The scheduled route today was one of the medium plus classic hilly routes (Little Almscliffe-Duck Street-Greenhow-Appletreewick-Beamsley-Otley-Kirby Overblow). Not content with the planned hills, and with the White Rose Classic sportive looming next month, the climb up Langbar was thrown in. Eight of us made good time up Duck Street against the headwind and then decided to detour off to Burnsall to try out a new cafe. Although this detour required an extra few miles the Riverbank Cafe is well worth a visit. It replaces the kiosk that used to be in the carpark and has an excellent selection of cakes, very good coffee and impressive-looking bacon rolls. Andy Ackroyd headed back up Greenhow, leaving seven of us to roll on and huff and puff our way up Langbar, with Trefor coming off his bike with cramp. En route home Mark Townend headed home via Askwith and Timble, Mark Carter and John Sewell decided to head up Norwood Edge, and the remaining four of us (Trefor, Darcy and Paul B) followed the planned route as far as Kirby Overblow and then detoured via Pannal. A great day out with some good hard hill work to help beat those legs into shape for June. I just hope the legs respond appropriately! Michael Inglis 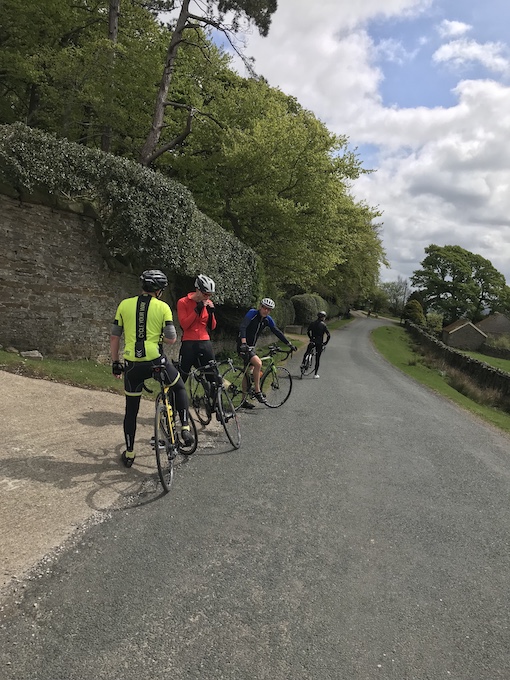 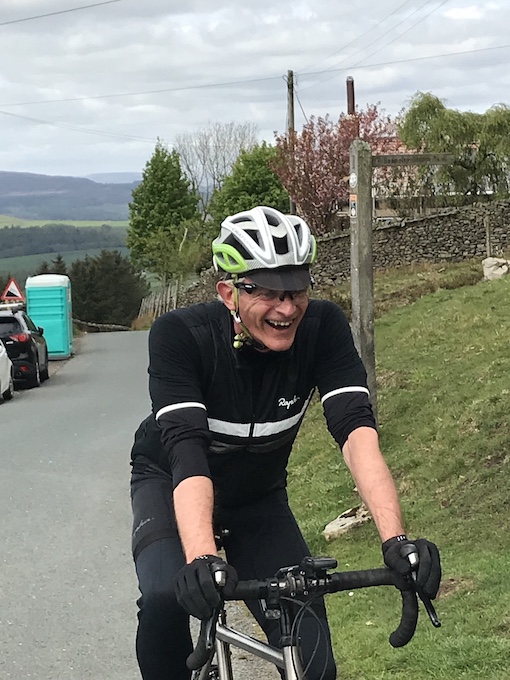 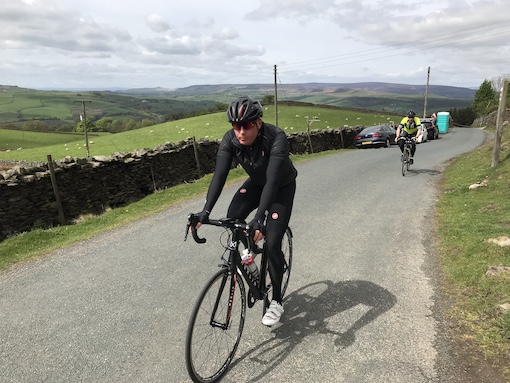 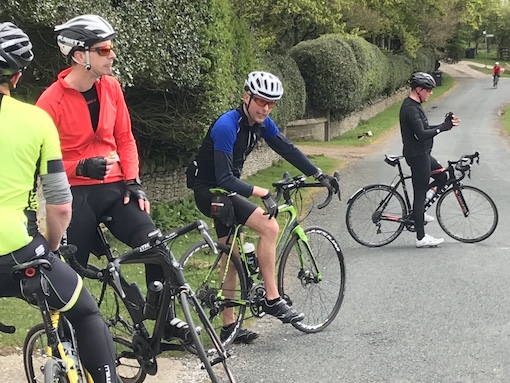 It is a little known fact that there is a Yorkshire Folio of Shakespeare’s plays, which sheds light on some famous quotes.  Hamlet, for example, goes on at 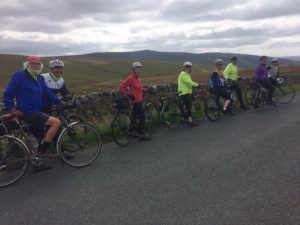 length about mad north north west, hawks and handsaws in the London/Stratford version – and it makes no sense at all.  But in the Yorkshire edition it becomes clear that he once cycled up Duck Street into a north-north-west wind – and was driven mad.  Which makes perfect sense.  Ten of us- Alison, Colin, Debbie, Gia, James, Jill F, Liz P,  Monica W, Paul T and A Southerner – took our chances, under fairly unpromising skies.  It was, as so often, hard work.  (Colin suggested that there are better ways to get to Greenhow, most obviously via Dacre, which has to be worth considering.)  There is a reason why we risk being driven mad of course, which is what comes next.  Amazing views across towards Grassington, and then the to-die-for descent into Wharfedale, and a route that follows the Wharfe for 15 miles.  The sun came out, the wind dropped, and all was right with the world.
This was my last Sunday ride before I head south, and end here with three brief thoughts.  First, I was touched by James’ kind words, and the cards, at Hornbeam this morning.  Second, Wheel Easy has been an important part of my life over the last eight years, and I will miss it more than anything else about Harrogate.  Look after it, it’s a precious jewel.  Third, I have been thinking about my favourite moments.  So many of them come out of riding with people who points things out that I would simply have missed, such as Colin pointing to a crow chasing a buzzard (who knew?), and Keith Tate showing us the stained glass in the church at Bolton Percy.  One day, ages ago, we had just crossed Dallowgill Moor on a really cold day.  Peter Beckingham, just behind me, said, ‘There’s a merlin’.  It took me a few seconds to process what he had said.  ‘Where?’, I managed to ask.  ‘Over there, on a fence post’.  And there it was.  And it was perfect.  Justin K. 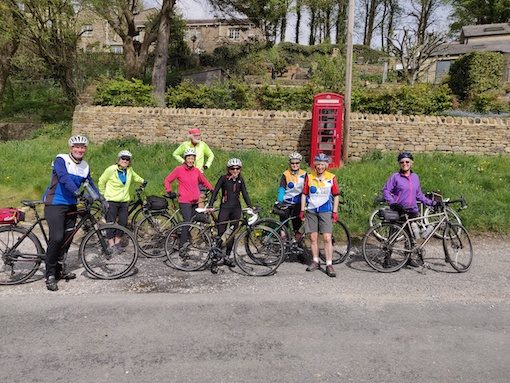 14 for the Medium ride today, the route of which had caused some confusion. Was the route on the website already reversed, or was it going to be reversed on the day? Why was the route Geraldine handed out different from the route on the website, whether or not reversed? All was explained and we split into two groups, the first six, led by Brian and Big Dave, and the remainder with Geraldine and me. Through town and the ASDA cycle path and then the Greenway to Ripley, where we regrouped. Paul P was on an electric bike, but he didn’t seem to be using the battery at all, and was manly cycling his heavy bike unassisted, until, that is, we got half way up Scarah Bank when he switched on and left us for dust. Group photo taken at the ‘top’ of Scarah Bank. On towards Fountains, but right down Watergate Road and How Hill Road, past the Gipsy camp and then down, across the (small) River Skell and up to the newly-refurbished visitor centre at Fountains for coffee. Much discussion about Building Regulations and the sad lack of high environmental standards for new houses, Pink Floyd and such like. Jeannie appeared over coffee looking a little flustered and asked where we had been, as she had waited for us in Knaresborough. Down the Deer park to Studley Royal, but we had a minor detour on the way into Ripon as Paul the vet called in at his work to pick something up for his neighbour’s cat, thus giving us about 500 metres of never-before-ridden road. Through Ripon, across the ring road towards Littlethorpe, Pottery Lane and into Bishop Monkton. Following a brief poll on the Mountgarret Estate option as a way home, Brian graciously conceded defeat and we opted for that instead of Copgrove and Knaresborough on the now-defunct route on the website. Cheers and mild amusement as one brave fellow tried to ride through the ford at the Limekilns. He almost succeeded, but ended up with a very wet right foot. On through the estate and all was well, apart from the fact that our back marker was now at the front, and as the road emerged from the estate, she turned left towards Scotton instead of right towards Nidd. Those who had followed her had gone several hundred metres in the wrong direction before the whole of the group reached the junction where the error was made. Cometh the hour, cometh the man, and Paul P switched on full power and chased down the errant group in no time, and herded them back in the right direction towards Nidd. Briefly on the A61 to Ripley, and then back along the Greenway.  About 33 miles   CPS 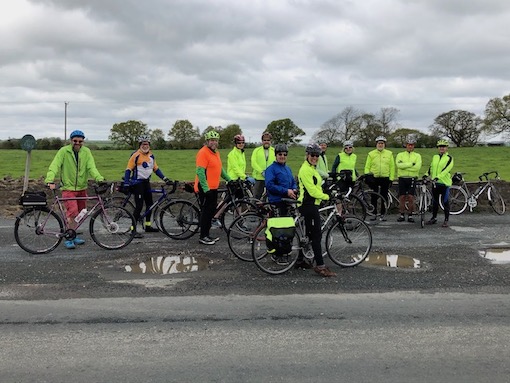 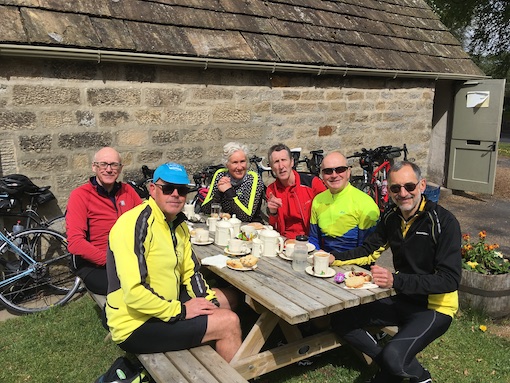 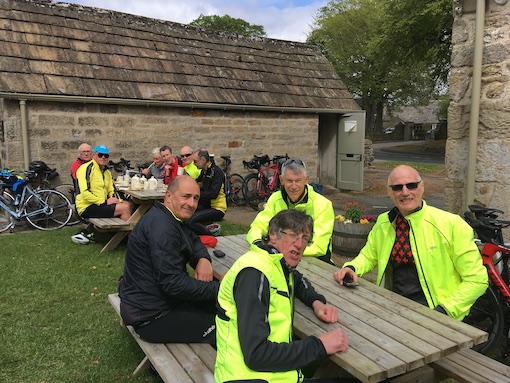 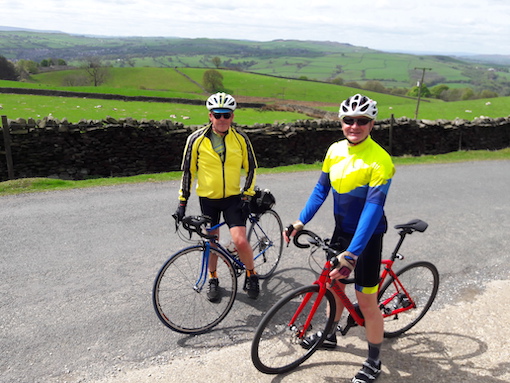