Since there was no published short ride, and I’m allergic to hills, I floated the proposal of a modest 20 miler down to Wetherby and back… Rachel was up for that, and so was Mike (having discounted both 25 and 28 mile alternative offerings). We were briefly joined by Matt, a new chap who had come to see what WE were about but he bid his farewells before Woodlands. Anyway, we three headed off to Little Ribston via Abbey Rd and St James. Since we were making good time and the weather was set fair, we decided to head for Cowthorpe, Rudgate and Walton. That would have added a few miles to our plan, but we missed Rudgate and ended up in Tockwith… Mike’s oracular phone brought us round by the bottom of the airfield and we regained Rudgate. That was another couple of bonus miles. At Walton we thought it would be a sin not to support the cafe at Thorpe Arch, so we headed there on the hunt for bacon butties. Another mile or two ! Anyway, refreshed and refueled we had a great little run up the silky smooth tarmac past the racecourse to Wetherby and then up the bone dry Harland Way with a break for a photo and a chat about dogs with some walkers. The extra miles were telling on us a little up through Follifoot, but we got home happy and pleased with our detours. Thanks to Rachel and Mike for their great company and adventurous spirit. I ended up with 31 miles on the clock; not bad for a 20 mile ride !
Brian N

Winter is coming. But not today.  I was notionally the leader but Keith was in the pack, quietly and unobtrusively diffusing any catastrophes.  In my defence, I do know all the routes with their many twists and turns and café stops, just not necessarily in the right order.  Anyway, hard to go wrong on the route to Hampsthwaite where we picked up Paul T sitting next to a, now empty, coffee cup at Sophie’s.  The rather large group split into two here and I continued with Keith, Bianchi Bob, Helen and Douglas and Corinne – we also had the added joy of an EG in the shape of Peter B and our Long Fast Boy Richard Leake.  Quite an eclectic mix and all the better for that.
Although this is a pretty hilly ride through Birstwith, Darley, Darley Head and Dacre the views were truly magnificent today before the slightly perilous descent into Pateley Bridge and the oasis of Teacups.  They had set up a nice little shack in the car park with plenty of tables outside serving the usual very cheap and very cheerful fayre, very efficiently.  Many subjects, too numerous to mention, were covered and the sun was now at it’s zenith and really quite hot.  Superfluous clothing was discarded and we braced ourselves for more hills through Glasshouses, Smelthouses and up to Brimham Rocks.  We then had our reward of some very fine descending pretty much all the way back to Ripley and home.
A fine end to summer, if the meteorologists are to be believed and I would urge you all to start rummaging around for your woolly vests, hats and long leggings.  Not just for cycling – they will be really handy for when all the gas and electricity run out.  Helen T 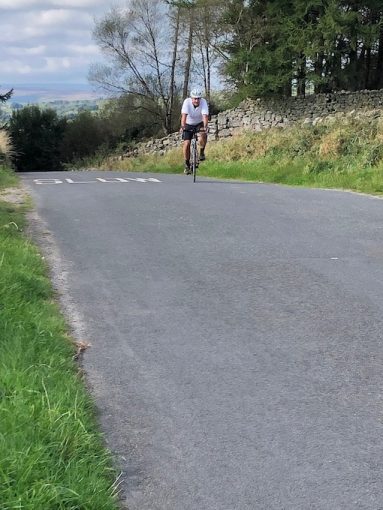 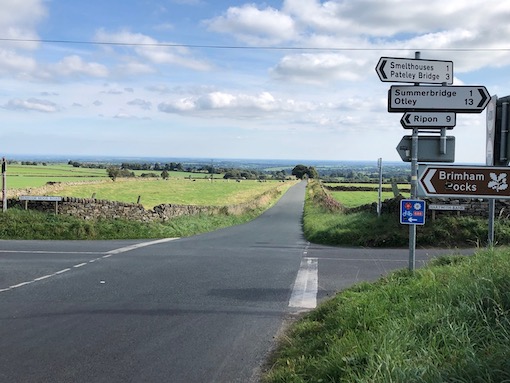 Route 74 to Wetherby – possibly the strangest way to get there from our meeting point but after a slightly chilly start the temperature rose. And then rose some more. Sunshine from Norwood all the way round on what turned out to be a simply gorgeous day for cycling & chatting. Six riders in the 1st group (Vince, David, Peter, Glyn, Dennis & Tall Tim) but we bumped into the 2nd group from time to time mostly as a result of a languorous stop in a busy Wetherby. 54 miles. Tall Tim. 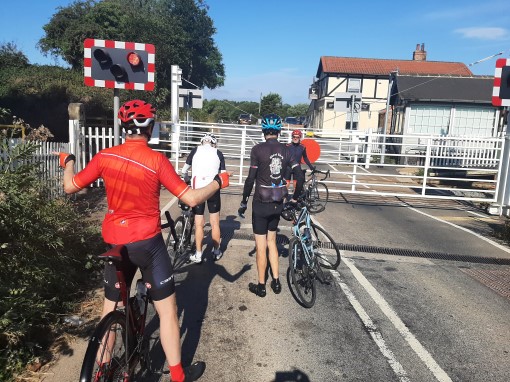 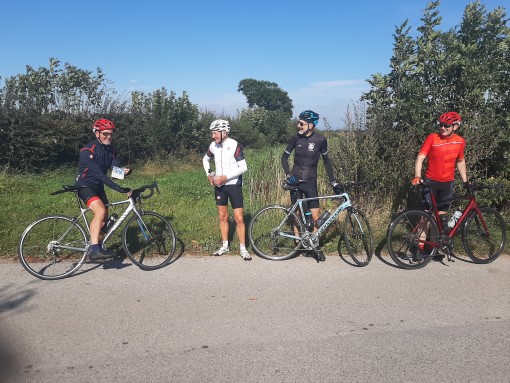 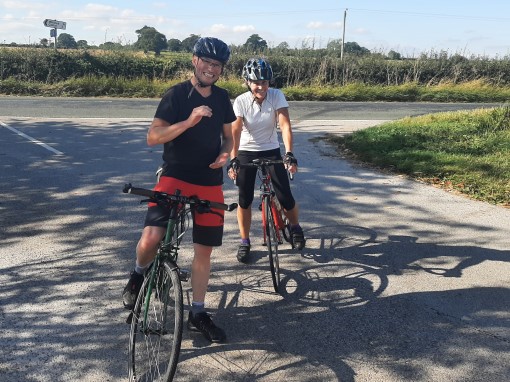