Three riders met at Ripley at 12.00. Sadly we missed Postman Paul who was waiting in the village. However he gallantly made his own way to Fountains where he met up with Malcolm for the final leg of the ride to Spa Gardens.

We were treated to an array of cakes, flapjack and scones, teas and coffee. Thanks to the Directors for their generosity and Caroline from the cafe for making the delicious food. Mileage from Ripley roughly 22. Jean B

Only Brian was there at Hornbeam when we arrived at about 10.20 am for the 13th anniversary ride. Is this it, we thought? No, as Marwood, Paul B and Corinne arrived, making six. Greenway to Ripley, Pateley Bridge Road and up Scarah Bank to the junction with Watergate Road (not ‘Lane’ – see photo) and then to Fountains, passing a horse and trap at the gypsy camp.

Long discussions on various erudite topics at Fountains café, as we realised we may probably reach Spa Gardens well before the appointed time of 1.45 pm, which we did. Tea, coffee, cakes and group photo taken, we returned via Littlethorpe and the Mountgarret estate. About 32 miles. Joe S 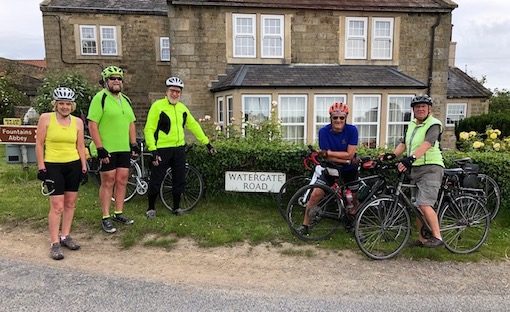 Midsummer, no rain and a dry, fine morning. Seven riders set off to meet other groups at Ripon Spa Gardens for the anniversary tea. Cycling out to Ripley on the greenway was slow due to lots of Sunday morning walkers and dog walkers. Then out to Clint, Birstwith crossing the toll bridge, up Stripe Lane towards Brimham Rocks. Then downhill to Glasshouses and stopping at Teacups, Pateley Bridge, tea and coffee 50p for a large mug.

After we were refreshed two riders left to make their own way back to Harrogate due to family commitments so five riders now left cycling towards Wath, on the newly ‘loose chipping’ covered road and getting spattered with chippings from those drivers ignoring the speed limit signs! Now the long climb to the top, a couple of riders chose to walk, allowing them to enjoy the views back down Nidderdale! We did have to get on the grass verge to allow a tractor with a large wide trailer to pass taking up all the road, but once at the top the views were lovely and well worth the climb.

Then it was to Fellbeck, Rabbit Hill, Watergate, Fountains, arriving at Spa Gardens in good time. The return was Littlethorpe, Bishop Monkton, Farnham and Knaresborough Hill. A very good enjoyable ride with lots of chatting and the cakes at Spa Gardens were also very good! Thanks to Wheel Easy. 49miles. Chris R 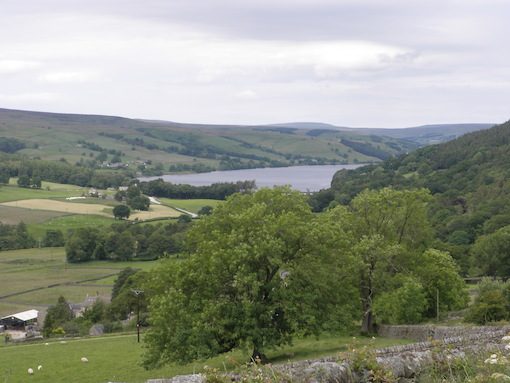 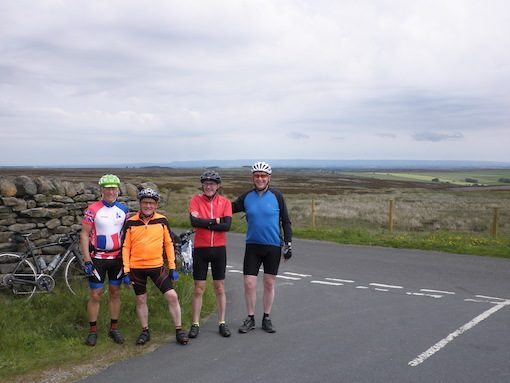 Seven of us opted for the 50 mile slower medium plus ride to Pateley and Ripon for the ‘Anniversary get together’.

The route took us along the Greenway, through Clint and Birstwith, over the Toll Bridge, up Stripe Lane to Brimham. Peter and John had left us by the time we dropped down to Glasshouses and into Pateley where we headed to Wildings for coffee.

After coffee we headed to Wath and up the steep Wath Lane onto Fellbeck where we decided to alter the route and continue along the B6265 to Sawley Moor Lane into Sawley and onto Ripon  to ensure we arrived in time for afternoon refreshment at Spa Gardens.

After an enjoyable anniversary celebration we returned home either via Fountains or Bishop Monkton. Gia M 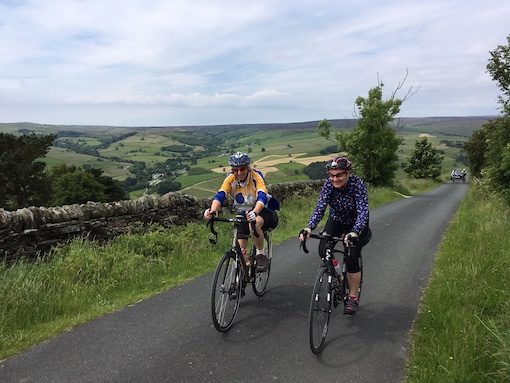 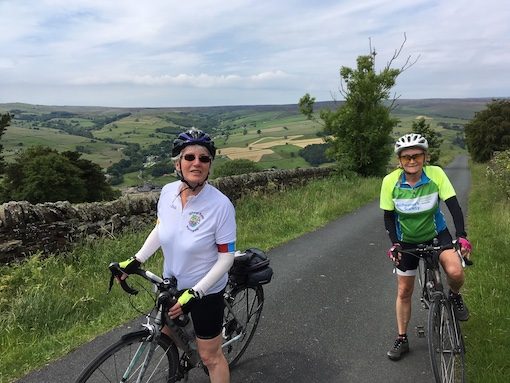 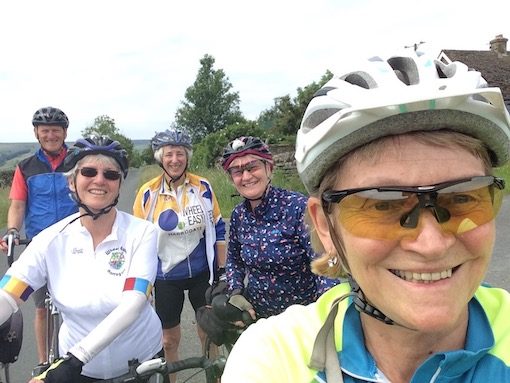 Eight riders left Hornbeam Park to follow the specified route, all was going to schedule so we stopped near Fountains for a drink of juice, someone noticed that Helen’s rear tyre was showing signs of her immense power and had worn down to the casing! My offer of a Colgate “Advanced” patch was replaced by Dave’s  “special” material patch, this was duly inserted in-between Helen’s inner tube and outer tyre and we set off congratulating ourselves on a job well done……..however life isn’t that simple!

Between Fountains and the hill following the food stop at Masham we inserted both another material patch as a second piece of casing had revealed itself, and a new inner tube, subsequently following another flat Helen was forced to call the “Broom Wagon”(driven by her husband) to transport her back to Harrogate.

The rest of us continued to Spa Gardens missing out the Thornton Watlass loop for the W.E. celebrations then via Markington, Ripley Greenway to Harrogate. I bid farewell and cycled back to Leeds via Pool and Otley, completing 85.66 miles, 4927ft climbed. Luckily I also beat the rain which was a nice change. Rob M 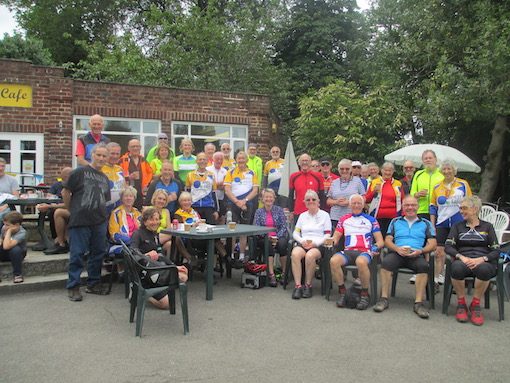 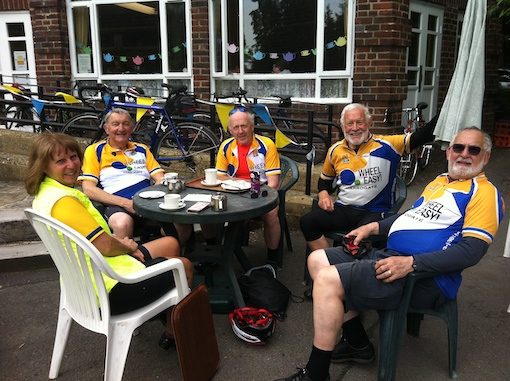 This was a very early start- setting off  by car/ van before 7am to register for the start in Ilkley, by 7.30. All set off together with three riders sporting the new Wheel Easy kit.

The route took us up all of the biggest hills including Norwood Edge, Albert Hill and Langbar- the other way. Andy, Michael, Paul, Darcy and Mark opted for the medium (85 mile) route, while Julie and Denis downgraded their ambition and did the short (50 mile) route.

The weather was perfect, the scenery Yorkshire’s finest , and the hills were never ending. Definitely one to be repeated. Julie E 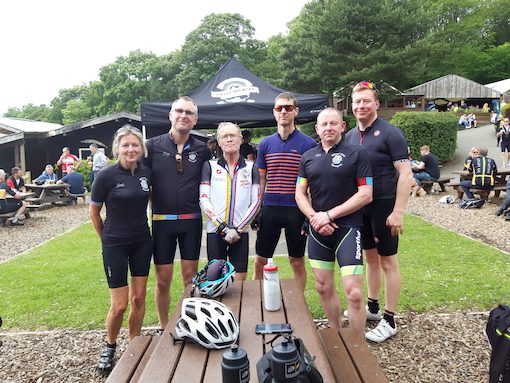