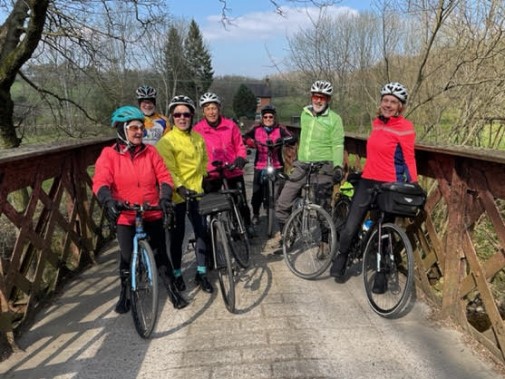 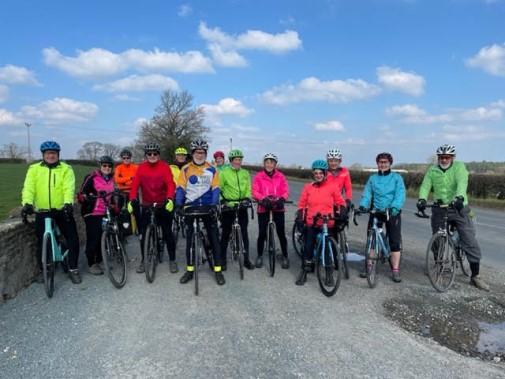 There was a lot of interest in the Medium Ride on this dazzling spring morning. As Keith didn’t step back fast enough, he was recruited to take one group of seven who set off smartly for the Greenway. It was a pleasure to be in the company of one of the first EGs in the shape of Dave Preston. It was also good to have Alison back in the peloton after her shoulder operation, looking as fit, fast and svelte as ever.

At Ripley Corinne and Alan from Northumberland were waiting for us. We also mingled occasionally with a small, elite group of four fast boys, namely Mike W, Richard L, Peter and Somebody Else. That’s why we look like an unmanageably large group in the photograph. The tenor of the day was Keith and Alison proposing minor tweaks and changes to the route which is why we went up Westerns Lane from Markington en route to Sawley and Risplith. The elite fast boys were already installed in G&Ts when we arrived and, indeed were still installed when we finally left! There was a small kerfuffle when Liz F found herself permanently attached to Alan from Northumberland because the key had broken off in his bike lock. A nice man from G&Ts soon appeared and, with some difficulty, managed to cut the cable and free them both. This is in no way related to the incident but Alan then had to return home quickly, so he pressed the re-heat button and vanished over the horizon. Margaret also had to head home via a shorter route so we were back down to seven.

Following Alison’s minor variant, we headed uphill and left after G&Ts to avoid the main road and, with the sun high in the sky, were soon passing Brimham Rocks and enjoying a swift descent down Stripe Lane. We did pass Jo and Geraldine’s group, dealing with a broken chain issue but everything looked to be under control and they will tell their own story.

A very pleasant return along Hollybank Lane to Ripley and the Greenway brought a delightful day to a close with the prospect of a fine week stretching out before us. We covered 33 fairly strenuous miles and enjoyed every inch of it. Keith & Helen T 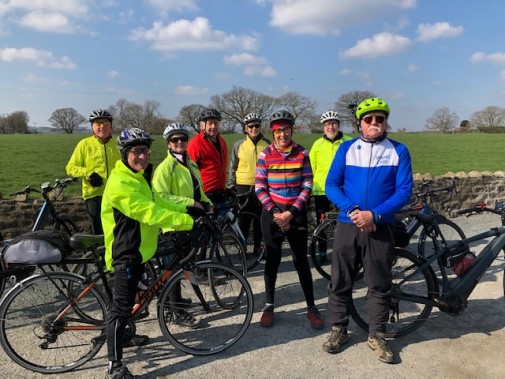 There were 21 of us at Hornbeam (the Showground being full of campervans and motorhomes…) for the medium steady ride on a sunny, cool-ish day with an easterly wind. We split into 3 groups, with Keith Tate and John H taking sub-groups. Our route to Dragon Bridge was obviously a bit quicker than the one taken by Keith’s group, as we both got there at the same time. After allowing a decent gap to develop, we followed them to Ripley and up Scarah Bank. We turned right to Markington and then up the now-safe Westerns Lane and on towards Fountains. (I spotted quite a few road-kill pheasants and wondered about picking up one fairly undamaged one, before thinking what Geraldine would say). We turned left and then right up the small quiet road (Green Bank Lane?) which comes out in Sawley and on to G&T’s in Risplith. Geordie Alan had locked his bike to Liz Frederikson’s, but couldn’t open the lock after coffee. G&T’s provided a man with some wire cutters to assist; he succeeded, but the lock proved surprisingly resistant. On towards Pateley Bridge on the B6265, but with a following wind, then left to Brimham Rocks and down Stripe Lane to Hartwith Mill and Birstwith. Male Chris’s chain broke big time as we started climbing Clint Bank, so it was suggested he went to the pub and wait for female Chris to go home and get the car. Back through Holly Bank Woods, where Kevin Douglas fell off, but fortunately not seriously. (James G was more concerned for the bike than for Kevin, as it had been borrowed from him…). Back along the Greenway. About 33 miles..

Five of us set off from Hornbeam Park,  the Caravan and Motorhome Show being hosted at the Showground. We headed out to Burnbridge and made steady work of the long climb up Brackenthwaite Lane, commenting on the glorious sunshine but very cold wind. Heard the first Chiff Chaff of the year – must be Spring! On to North Rigton, stopping at Almscliffe Crag to enjoy the breathtaking views of the Crag and Wharfedale. Perfect photo opportunity! Turning left, we swept downhill through Huby, Weeton and on to Dunkeswick. We negotiated the crossing of the A61 in style and headed uphill and onwards to Kirby Overblow. A quick sprint on the Harrogate Ring Road and we were on our way past the rugby ground and onto the showground. We attempted to stop for coffee at Weetons but eventually gave up on the apparently endless and unmoving queue. Heading home, I reflected on a stunning day, enjoying the fine country lanes around Harrogate with excellent company. 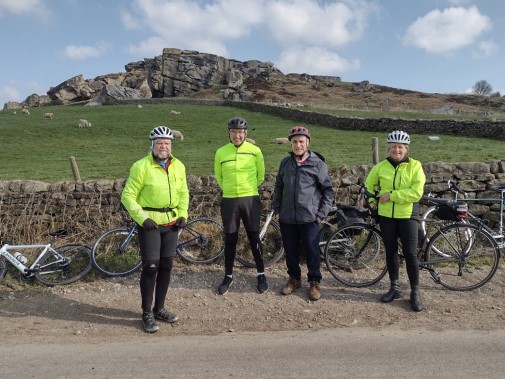 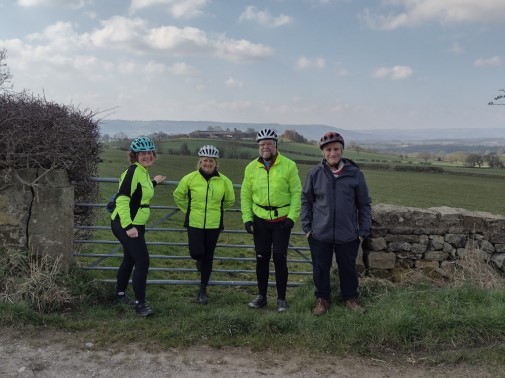