Brian, Charlie, Colin, Mike, Mike and me had a highly enjoyable ride to Bishop Monkton, Boroughbridge – excellent service at Plenty – and the Dunsforths.  And then we turned into a strong westerly at Great Ouseburn: far enough from home to turn the ride into a decent workout.  My Strava says 36 miles, but it must be the flattest Medium, so felt like less. Justin K. 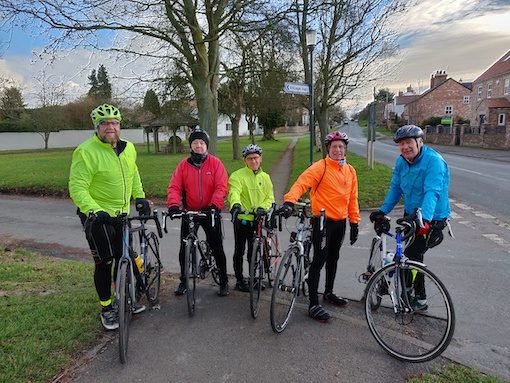 It’s said that the Road to Hell is paved with good intentions; today it was a bit more local in the shape of the Road to Brimham Rocks. Some of us decided to brave the elements and form an advance group up the hill, after much conjecture regarding the likely wind speeds up there. Well, we hadn’t gone two miles when the discretion part of valour started kicking in. “It’s a bit windy, isn’t it?” “Do you think we’ll be OK?” I don’t like this very much”. You know the kind of thing; seeds of doubt sown around our plan. By the time Knox was reached, for Brimham Rocks read “The Moon”. We weren’t up for it. No way.

The joint decision was reached to keep to the Lowland as far as poss, and Ripon via a circuitous route was agreed.

Well, I know we called off at Ripley to view the extent of the thievery reported overnight, of the lead from the roof. Quite a lot of flashings gone. When you weigh up the risks of 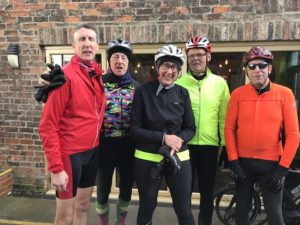 being arrested (perhaps not very frightening to some), and the value of the spoils by the time they have been weighed in at some bent scrap dealer, it just doesn’t seem worth the effort of getting up in the dead of night. What a shame!

A short jag up the main road and into the byeways for a slightly different route to Ripon found us at Oliver’s Pantry (again). Well it is a good stopping off spot.

A near industrial quantity of bacon sandwiches and tea were ordered, and consumed as replacement calories, before we were firmly hustled off our table by the following Wheel Easy group. We were going to exaggerate our morning’s mileage to them until we learnt that they had made it to the aforesaid Rocks, and then we felt a bit ashamed, and crept away, feeling admiration for them braving the elements which had seemed a bit daunting to is. Well done.

Still wanting miles, we departed Ripon via Wath and Melmerby before turning what we though would be downwind for the general direction of HG1. Well, you all know the first rule of cycling; even when the wind is behind you, it’s against you! And so it proved on our return leg.

We did meet up again at Sandy Lane with some of the other Med Plussers, who were still on the proscribed route, unlike us reprobates.

Knaresborough Hill does not get any better with knowing, but after a final assembly outside the Golf Club bus shelter, we all departed for our various homes.

Thanks Helen, Tim, Martin and John for an excellent day out; around 50 good miles covered.      DaveS.

All led rides were cancelled due to the strong winds and discussions were taking place on which would be the best low level route to take. I was quite happy to stay with the 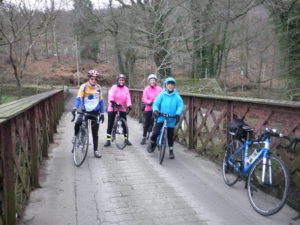 planned route, but change if needed. Soon 4 other riders decided to come along Liz F, Tim, Allison and Margaret and we set off towards Knox, I was sure at one point I was peddling down Knox lane! From Hampsthwaite up towards Clapham Green we were getting blown by side winds, over the toll bridge and then up Stripe Lane and on past Brimham Rocks, a little gusty with side and 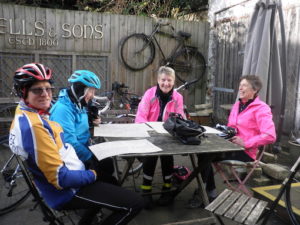 head winds, but not as bad as we thought it was going to be. The views over toward the Vale of York and Hambleton Hills were very good in the sun. We had a catch up at the Rabbit Hill turning, then Liz had problems setting off in some gusts as the rest of us cycled off. Time to rest the legs on the main road before turning off to Sawley, downhill with a tail wind and Tim recorded 33mph. Through Studley Park to Ripon and Oliver’s café where we met up with the other group, it was full with a queue for tables so we decided to sit outside in the warm sun until there was some room inside. Then it was on to Littlethorpe and at Bishop Monkton, we decided to turn right into the head wind to Markington then back though Ripley and the Greenway back to Harrogate. Stopping at the Nidd viaduct, Otters could be seen in the now lower water level! A good ride in warm sunshine and not as windy as the lower level rides possibly had! 40 miles.       Chris R.

With gusty winds and more to come 5 of us(Jill,Debbie,Tim,James and me didn’t fancy the heights of Brimham Rocks so decided on a low level route to Knaresborough,Boroughbride and Ripon for coffee and then decide on a route back.

This also left us lots of escape routes if the weather turned bad.

The decision was made to press on to Ripon. We gave a quick wave to the Medium Riders who were just stopping for coffee etc. Not to hard a ride into Ripon where we made for Olivers Pantry(aka Wheeleasy HQ with so many of us in there!).

All the Medium Plus groups and the Long group(on a short ride) were in the cafe at at sometime but the staff were excellent and got the food and drinks to us quickly with a smile on their face.

After refuelling we set off back via Littlethorpe and Farnham with the sun out and little wind. The Long ride group met us at Farnham and sped off whilst we decided to head home via Lingerfield,Knaresborough and up the hill to Starbeck and home.

No photo today,44 miles(felt like more) and good team work in riding into the wind.

A small turn out at Hornbeam, put off by the weather forecast, but all was but a breeze in the car park. That, was to change!
Four of us set off and the wind initially was not an issue, until we reached the climb out of Hampsthwaite to Birstwith. There it really hit us and along with a slight drizzle, made it a lot harder than it should. Over the toll bridge, and up stripe lane and again wind and drizzle made it tough, but on we climbed up to Brimham Rocks. By now the weather had improved somewhat and a turn right onto the B road to Ripon brought the wind on our backs and Dan reached a PB of 45mph. We did think of staying on this road, wind assisted to Ripon, but that would be cheating wouldn’t it so on we went to Sawley and the through the Deer Park at Fountains, a great downhill section. Onto Ripon and by now the wind wasn’t a factor, and we had a pit stop at Cafe Nero, where Dan was very restrained with only a toastie, fruit, and a yoghurt pot! By now the sun was out and mild almost spring like and it was only when we turned for Lingerfield did the wind become an issue again.
40 miles, 3200 feet of climbing. Tough at times, but never dangerous. A day for the classics hard men. There wasn’t any, but a very enjoyable ride.

Many thanks to Mark C, Dan and Steve

Nobut five of us set off through the Showground but by the time we got to Stonefall we were eight, having attracted three of the putative medium riders. Then on to Thistle Hill, Follifoot, Spofforth, Little Ribston and Waterside for the café stop.
Warm and dry weather and only a moderate wind, notwithstanding the forecast.
Miles, not a lot; climbing, not much; satisfaction, bigly.        Paul B 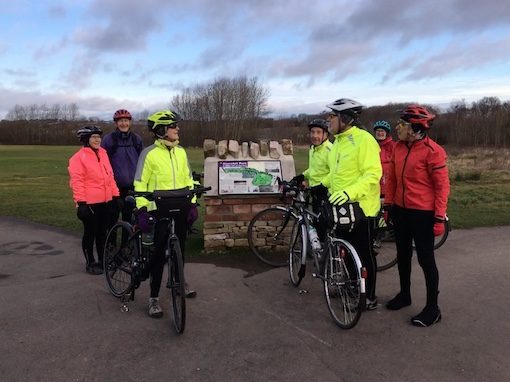