Ten people decided to opt for the short 600th ride on this gloriously clear crispy day. We meandered towards Knaresborough, turned left passed the Grimshawery to Scriven and Lingerfield and by this point we had all realised that it was cold as well as crispy. We passed through countryside near Scotton which was green and almost spring like, but as we stopped at the Brearton turn off towards Nidd everything was a comfortable glowing pink….soil, hedges, houses. We had a haphazard (thanks Caroline) start to our 2 minutes silence and a formalised finish by radio 4 (thanks Jill) viewing a deliciously wintery scene towards the east. A few more minutes of pedalling into a northerly headwind and we had reached the warmth of the cafe at Ripley. Here people ordered coffee, tea and teacakes and chat by the bucket load. On finishing we sped home in sunshine and a following wind down the greenway, back in time for lunch. Thank you, David S, for your superior back marking and everyone else for being so nice. 19 miles 9,879 paces 52 floors.CG 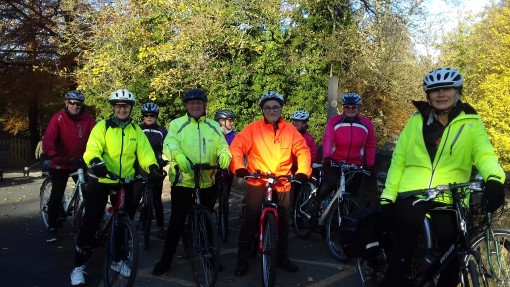 A tricky start for the 600th Sunday ride: the Short group got ahead of us on the Stray, and then proved as difficult to pass as Lewis Hamilton. They finally pulled over half way down the Greenway, having proved their point: Short Ride Rules. Then it was on down the Greenway – passing Tim and his dogs – to Ripley and Watergate Lane, which had a ‘road ahead closed’ sign. Al opined that all would be fine – and it was, indeed the road wasn’t really closed. Good decision. We stopped at Fountains and came upon the Long riders. They said they had only been as far as us: do they really go those distances, or do they go to Boroughbridge and hide every week? We did begin to wonder. Then it was back via the Mountgarret Estate. Dave P was back marking – a bit like having Bobby Moore turn up at your kickabout in the park – and gave the group gold stars for riding in small groups on that short stretch back into Ripley. A perfect, cloudless day, and excellent company. 32 miles – or more, or less, depending on which gadget you use. Justin K. 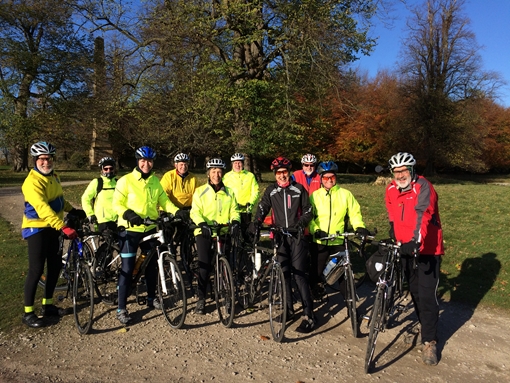 It was a beautiful sunny morning and nine riders opted to join me on the medium paced ride to Easingwold. We set off at a reasonable speed to try and keep warm in the icy wind. It had been agreed at Hornbeam to stop close to 11 o’clock to observe 2 minutes silence on Remembrance Sunday which we duly did at a peaceful spot near Aldwark Bridge. James had brought his radio especially for this purpose. After Aldwark, the hardy chap in shorts – sorry no name – turned right to go in the direction of Beningborough while the rest of us continued onto Easingwold. We were all glad of a good comfort break from the strong wind at the Curious Table and watched the special parade on the Square through the windows. Then it was the battle into the wind again to Boroughbridge with various gallant members shouldering the strongest gusts. Jill suggested to go by Lingerfield and Scriven on the way home to avoid the traffic build up at the temporary lights. James led us with skilful navigation to the main road through Knaresborough and then it was just that hill to be climbed. All having got to the top, we said goodbye setting off in different directions on the last leg home. A good day out in the usual fine company. About 49 miles Monica W 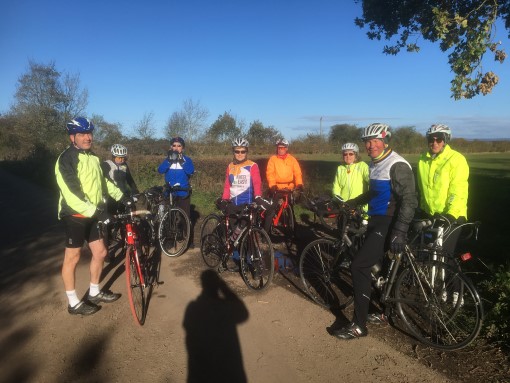 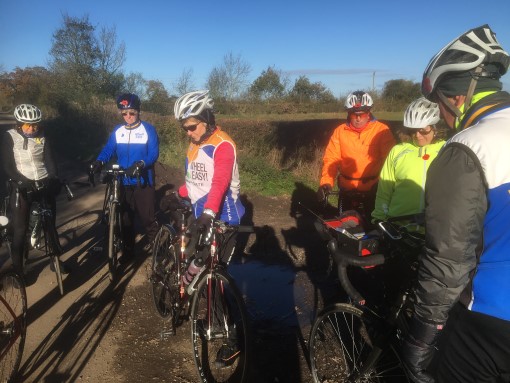 The faster group, comprising 10 eager cyclists, sped off into the autumn sunshine and that icy north wind. Some warmed up faster than others with Julie shedding a layer by the time we got to Knaresborough. At those pesky temporary traffic lights Paul noticed he had a flat tyre and since the lights take so long to change he thought he could change his tyre whilst waiting for the green light. After at least a dozen light changes the wheel- change turned into a mechanical so, unable to continue on the sooper- doper Prologue machine, Paul returned to base. The group recovered pace and continued towards Aldwark Bridge arriving in Easingwold where they found a little Cafe off the market square. During a leisurely lunch break we received news that Paul was 4 miles away on his summer steed so we waited for his pending arrival and allowed him to have a quick coffee before continuing on our way. The route home via Thornton Bridge was directly into the wind – for ages- until we turned south west and got blown along for a while.
Martin left us at Boroughbridge. Pete and Tony dropped off at and just before Knaresborough, leaving the rest of us the delights of Knaresborough Hill. Arrived home glowing! 47 miles, 1500 feet ascent.
Julie.

It might have been a bit cold and windy, but the long Ride more than made up for these negatives. Six riders set off towards Kirkby Malzeard, but the pull of Fountains was too much and we succumbed to their cake with a free drink. Just as we finished, the Medium Ride came in and Justin asked if we’d used the same route as they did (thinking, because we were the Long Ride we must have done another 10 miles or so!). We had done a slightly lumpy route but, really, we were just cold and fancied a stop. And we don’t really go that fast either.
Refreshed, we went on towards KM but took a small road to the south which Eric hadn’t seen before. That was almost the theme for the ride because there were a lot of roads we were riding in the ‘wrong’ direction e.g.: through the wiggly bit on the road to Pateley; down Wath Lane with its drainage channels; down Hartwith Bank; down Norwood Edge; etc. Some highlights:
– the moorland Road over to Wath Lane looked like a silver snake in the low, misty sunlight (ah, how unusually poetic of me!).
– the fantastic view to the west from Wath Lane.
– Glyn’s puncture, where we rode all the way back down towards Laverton to retrieve him.
– the fast run down Norwood Edge. Great!
– and of course the non-stop sunshine.
So, nearly 60 miles, around 1650m of climb, and a great day out. John H 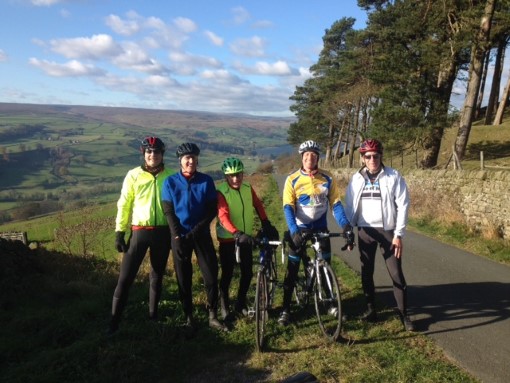