More than a couple of dozen chose the Medium ride with Glyn stepping in as one of the leaders at the last minute. There was some evidence of stiff limbs and post-festive podginess that demanded exercise, so off we went on this undulating 30 miler. Fourteen shot off to Kirby Overblow and Sicklinghall, thence to Bramham via the mansions of Linton, and then up the A1 cycle path to Wetherby for a rest at Morrison’s.
Some smart ones decided to return via the roads whilst the rest endured a very muddy Harland Way to Spofforth and then back to Hornbeam. A warm welcome to new bloke Paul from Boroughbridge, who we hope to see again, ‘appen with his missus next time. Thanks to Joe for back marking (except when he wasn’t). Paul B 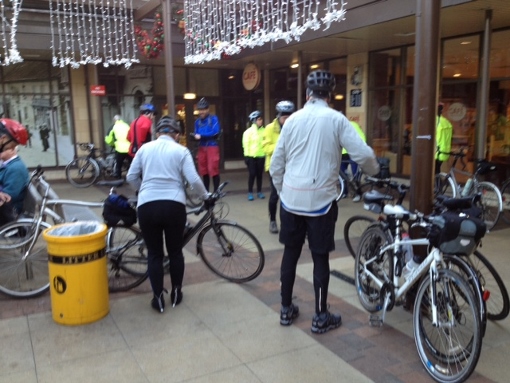 Fourteen, split into smaller groups, left Hornbeam Park and regrouped at low bridge, Knaresborough where Dave swelled our number to fifteen. After taking a group photo, Dave P made a brilliant suggestion: a freewheeling contest down the hill to see if anyone could make it over the next hill without pedalling (nobody did). This forced us to remember that Wheel Easy cyclists are there to have fun! Thanks Dave.
Although Boroughbridge is less than half way around the route we enjoyed an enforced coffee stop as it was the last opportunity on the ‘official’ route. By this time the group had split into two: my group of eight enjoyed the pleasures of Sophie’s, which was empty on our arrival but overflowing on our departure, while Dave’s group stopped at Morrison’s.
Regrouping after Aldborough, we rode on together but, on stopping at Little Ribston, found we were three short. I rode back to find them but my search was fruitless – Dave, Debbie and Don had taken another route. In all it was a pleasant ride, not too cold, with the sun shining most of the time, but the roads were mostly wet and, having just finished washing a layer of mud, salt, cattle dung and dead insects off my bike, dirty. Ian N

Out of Ian`s fifteen there had to be some slower ones, that being us, and a minority at that. A fast ten plus a slower five to Farnham and the mens (Debbie included) downhill to Occaney. No clear winners today and nobody made it over the hill (over the hill not a reference to any EG`s riding today). From Bishop Monkton to Roecliffe Glyn and Dave W led a group of seven to Boroughbridge. Ian`s group was not in view so Tasty Snacks was the first option but they were full. So (now six) riders Dave P, Dave W, Don, Glyn, Geoff/Jeff and Terry C headed for Morrison’s and the fastest toasted teacakes in the west.
Then away in the sun but on dirty roads to the Dunsforths where Ian`s group caught us up. Soon we were back to seven with Debbie joining us to add a bit of class to the group. At the Cowthorpe/Tockwith crossroads, Glyn, Dave W, Rob and others went straight across to up their end of year mileage. Ian`s fast group turned right to Cowthorpe followed by a slower select 3D group ie Debbie, Don and Dave P. It was in to the wind for the 3D`s with all riders taking turns to push the damn wind (not to bad really). Spofforth followed, but the showground was avoided as Debbie and Dave did not like that B……. hill and mud, so the soft option of the road was taken to the car park. Nice sunny day, but them were mucky roads. Around 45 miles, carpark to carpark Dave P 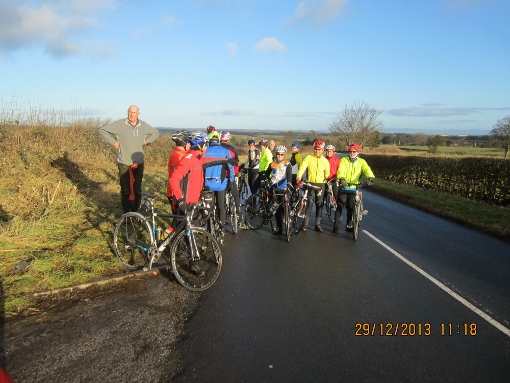 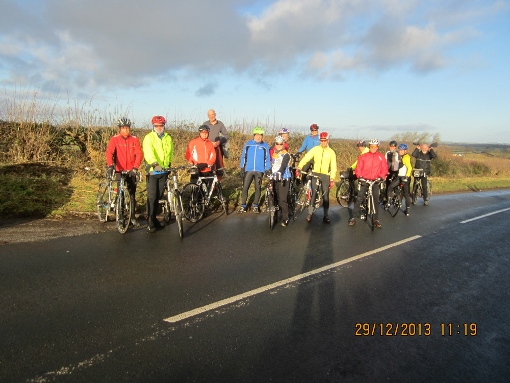 A bright cold winter’s morning, perfect for cycling as we gathered at Hornbeam and others obviously agreed as eight people joined the long ride to Thirsk. The group soon split into two groups with Phil, Mike, Andrew and James heading off at speed with Dave, Eric, Steve and Jill following on at a steadier pace. Eric had a close encounter with a car at Boroughbridge – are all our rides to Thirsk destined to be eventful…? Fortunately not, as we continued on to Thirsk without any further incidents finding the fast group already ensconced in the café. On leaving Thirsk the group split again into the same fast and steady paced heading back via Dalton, Topcliffe and Cundall to Broughbridge, Knaresborough and back to Harrogate. The wind made it a slightly harder ride home, but we all still made good time, getting back to Harrogate by 2.15pm after 55 miles – a good winter ride. Jill F