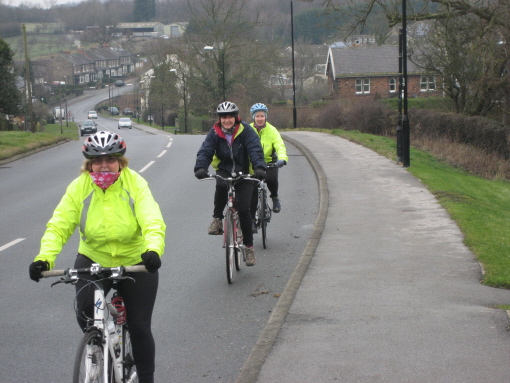 Today was Wheel Easy’s 300th ride and club members were out in force despite the zero temperature. We can look back at our early rides when 10 miles round the cycle paths of Harrogate was a major achievement. This gave Wheel Easy confidence to ride regularly, ride more miles, discover new places and inevitably buy more bikes and graduate to wearing Lycra!
We plan again to bring on a new group of Wheel Easy riders by offering that same ride routine to give more people the opportunity to discover the joys of riding a bike. Malcolm and Gia

Monica, Lynda, Sue and Diane opted for the short ride. They were all tempted to join the medium ride but thought it might be just too far on a cold morning. We enjoyed the new cycle paths to the Gardeners Arms and all wished the remainder of the Beryl Burton route into Knaresborough could be resurfaced. As we were concerned about the conditions and unsuitable tyres we joined the main road for the downhill into Waterside. Cold fingers and toes convinced us that a hot drink was needed. After warming up and discussing cycling targets we continued to Calcutt, Follifoot, Rudding Park and Hornbeam. Overall we covered 15 miles. A great morning’s ride! Paul

Medium Ride – 36 miles with 11 riders (approx)
Hornbeam – Burn Bridge – Kirkby Overblow – Collingham – East Rigton – Thorner – Bramham – Clifford – Thorp Arch – Wetherby – Spofforth (via muddy track) – Follifoot – Mornington Crescent
I can’t resist a challenge, so here it is, a Wheel Easy report in one sentence, with apologies for the excessive use of adverbs and commas!
This was a new route to me and my vague knowledge of the itinerary was shared with most of the rest of the group, notwithstanding a couple of exceptions so, we progressed unerringly all the way to Wetherby with only minor technical hitches and universal complaints about the cold, only to find that our favourite café in the Shambles was closed for refurbishment and a move next door but it will be open again next Tuesday, all of which presented an immediate challenge to the group who were instantly rescued by Rachael from Spofforth, who knew that the recently opened North Street Deli was a good place and, indeed, that proved to be the case with excellent, reasonably priced food, friendly efficient staff (who took our photograph), all in a spacious pleasant environment, which cheered the group up enormously and it wasn’t until Terry asked The Leader if she “intended to spend the rest of the afternoon there, or finish the ride”, that we were galvanised immediately in to action and plunged out in to the fine rain that became drizzle, then turned to something resembling sharp sleet, then back to rain but, such was the level of morale, that we simply laughed and joked our way back to Hornbeam, merging with the, allegedly slightly slower Medium Group (led by Keith) who had, fortuitously found their way in to Morrisons and, lo and behold, we were back within striking distance of a hot bath and another cup of tea, having waved goodbye to Rachael in Spofforth with the excuse that she had some friends to visit and the option of a ride back to Hornbeam to pick up her car, but, fortuitously, she had admitted to being a veteran of five Marathons so Yvonne immediately recruited her in to the WE Ladies Triathlon Team faster than the KGB, all of which made it an excellent day and gave us the joy of trying a new route and a new café. Helen

The second “shorter” group comprised 16 in number. We meandered along to Walton Head Lane where Alison performed a perfect pirouette to warn her fellow cyclists of an icy patch. Collingham was reached without further incident and, despite fears by some, the climb up towards East Rigton was accomplished with Caroline G leading the way. At Bramham a team of four – two Alisons, Dennis and Gordon – broke away for an early finish. The Gourmet Café in Wetherby was closed so we followed the EG style by frequenting a Morrison’s Café. One of our number, and she will remain nameless, actually had fish and chips! Then, on in the rain to Spofforth, Follifoot and Mornington Crescent. Thanks for great company and especially to Jo for continually rounding up the group from the rear. Keith

Fifteen of us rode up to Stainburn Woods, aware of the cold but at this stage not of the hazards of black ice even though we had talked about it at Hornbeam. Luckily for us the advance guard of the fast boys warned us of a patch of ice just before the village of Timble where Mark came off his bike, fortunately without much damage. Steve, William and Martin turned back at this point, while Darren and Mark carried on. Max sanded the road for the good people of Timble and any oncoming cyclists.
After that we were even more cautious and wondered at the wisdom of being out at all! BUT the views were fantastic, the hills demonic (!) there was no wind and for many of the group it was their first experience of this route. We had a chat with Wednesday Colin who lives along the route and Peter B stopped to try and buy his view, while the rest of us started to smell the coffee and heads down made it to Sophie’s in Hampsthwaite. Bob had found a different route to get there, Jim and Steve mistook Dacre for Darley but we all ended up at Sophie’s where once ensconced no-one seemed in a hurry to go home.
Into Harrogate just as it started to rain and sleet. A great ride, not so many miles, 32, but as we all agreed quality miles and in great company. Gia

Three of the five medium plus fast riders mutinied at Timble after Mark did his own version of dancing on ice. Myself, William and Martin returned to Harrogate via Penny Pot Lane and retired for the day. Approx 22 miles each for myself and William but Martin did about another 20 as he cycled to and from the bridge of Boro at each end of the ride. Steve

Five brave souls, Martin, William, Darren, Steve and myself set off on a chilly morn to do a slightly different ride, to now be known as the Reservoir Rumble. First slight climb took us up Stainburn Moor and then onto Fewston. The next climb produced a bit of a fall for myself (I blame old age, poor eyesight and a lack of bike skills) as I came a cropper on a patch of ice just around a sharp left descent, there was no escaping as it covered the width of the road. No harm done, but three of the guys, quite rightly, decided to turn back as it could have got worse as the ride went on. Thankfully that turned out not to be the case. Down Blubberhouses Darren and I went cross over the main road and up we went West End. Fantastic views all around the snow/frost covered tops were to be had and then onto Thornthwaite, where we decided to go down Yorke’s Folly. Well it really could have been folly but as it turned out it was fine, so much so Darren videoed it on his new bike cam……..coming to a cinema near you. Cert 18.
Coffee was taken in Pateley and we then decided lets add a bit, so off we went to Wath and took in the stunning climb towards Dallow Gill Moor, quite steep in parts but no real problem, but quite long and once again we were rewarded with fantastic views over to the right of snow capped hills. Magic. Homeward bound now towards Brimham Rocks Shaw Mills, Ripley (no ice cream, we’re in training don’t you know – OK, it was shut), Killinghall and home. A brilliant ride on a still winter’s day. At a guess approx 45 -50 miles. Mark

5 riders (myself, Peter, Mike, Glyn and James) set off with some trepidation, due to possible icy roads. In the event we had no problems; even the steep descent down to Appletreewick was ok as it had been gritted(by a farmer?). But before we got that far we passed through the villages of Hampsthwaite, Birstwith, Darley and then the steep climb out of Thornthwaite, followed by another hill up to Duck Street. Then we had about 4 miles gradual ascent to Greenhow and luckily no head wind to contend with this week. Then followed the run down past Stump Cross and on to Appletreewick but before that we paused to admire the stunning snow-capped scenery roundabouts. The hills over to Grassington looked positively alpine. On to Burnsall for a cafe stop. I recommend the baked beans here, almost ‘Dunny’s like’ in portions, but all the grub looked good. We then had to contend with another hill out of Burnsall, again great views off to the left, followed by the switch-back run to Bolton Abbey and on through Ilkley and Otley to Poole where Peter turned off to Leathley and home to Beckwithshaw. We cycled along traffic-free lanes through Castley and Weeton to Kirkby Overblow where it started ‘chucking-it’ down with rain but by then we didn’t care as we were almost home. Approx. 60 miles.
Great ride and thanks for the company. Geoff M. 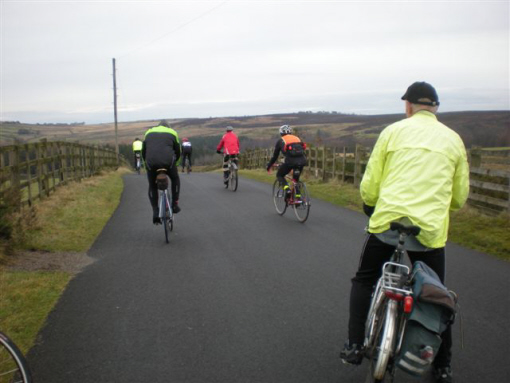 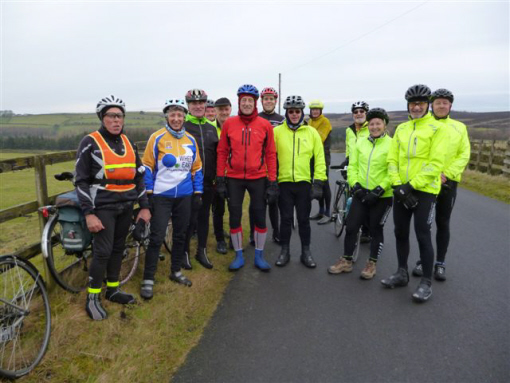