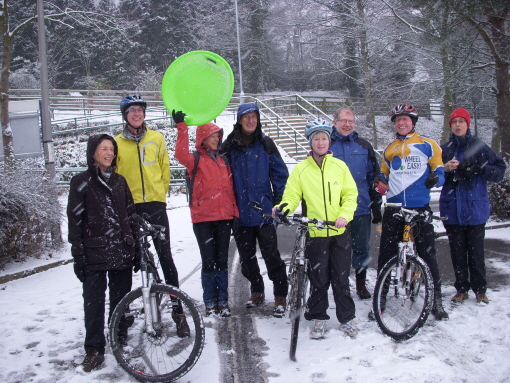 200th Long, Medium, Medium Plus, Short and Toboggan ride report
The snow was determined this time to play havoc with our ride programme but we were not entirely defeated. Seven turned up on foot to enjoy anything that was going, while three intrepid cyclists turned up on their bikes and they were the ones who really celebrated the 200th Wheel Easy ride. A particular award for bravery should go to Sue Threadgold, who made it to Hornbeam on her ordinary road bike through the snow, and even had a puncture to deal with in the process. Eric and Phil brought their mountain bikes along and covered some miles off-road, joining us at one point for some frolics in the snow.
The seven foot soldiers all decided to take advantage of Caroline’s Valentine Day present which was large circular plastic green thingy. It is specifically designed to go down snowy hills with a minimum of control. Next to Crimple Golf Course we found a worthy slope and had a great time, much to the amusement of dog walkers. There were no children out enjoying the snow (except us) – have they all forgotten what snow is really for? Martin W.

I woke up expecting to lead a 61 mile ride to Grassington and Bolton Abbey, and as the dawn broke realised there was a dusting of snow outside. Ever the optimist, I hoped the weather would improve and the ride would be on. By 7.40 as I left home to drive to church, the snow had increased to a couple of inches, and was still falling steadily. Worse still: underneath the snow there was thick ice to be scraped off the windscreen. So now its not looking so good for the long ride. At 9am the snow was now falling heavily, & on the way home, I couldn’t even drive the car up Yew Tree Lane, therefore had to turn back & find an alternative route home! By now I’d had to accept there was no chance whatsoever of cycling to Grassington, but every snow cloud has a silver lining, and its called “snow biking”. So a few minutes later I arrived on my mountain bike at Hornbeam Park for the 200th Anniversary Ride. Phil was there with his new mountain bike and very keen to give it a good test ride, so after a photo call to commemorate the 200th Wheel Easy ride with the Wheel Easy walkers (and Sue on road bike – wow!!!!), we set off on our 21 mile off-road circuit around Harrogate and Knaresborough.
As we went through Crimple Valley we met up with the Wheel Easy walkers, together with an out of control tea tray. The sledging temptation was too great to resist, so we took a few minutes off to test ourselves down the sledging slope on mountain bikes. What fun! Thank goodness we don’t have to act your age! As I keep telling myself: “60 is the new 16”. Then it was back to the ride, through Hookstone Wood, the Yorkshire Showground, across Wetherby Road to take the path following the old railway track to Hookstone Chase. We then had a couple of miles ‘on road’, along Forest Moor Road, and Thistle Hill, before taking the path through the woods to the Lido Caravan Park. We then crossed the bypass by St James Retail Park, and took the bridle path across the River Nidd at Goldsborough Mill and through the fields to Goldsborough. We crossed the bypass again, and took a right turn by Manse Farm onto the track which crosses the railway line, through Hay-a-Park to Hopewell House and then into Knaresborough for a coffee and photo stop on Waterside. The final leg of the ride was via Beryl Burton cycleway to Harrogate, arriving home by 1.30pm. 42 miles fun-filled miles to be added to the WE 2010 mileometer! Eric 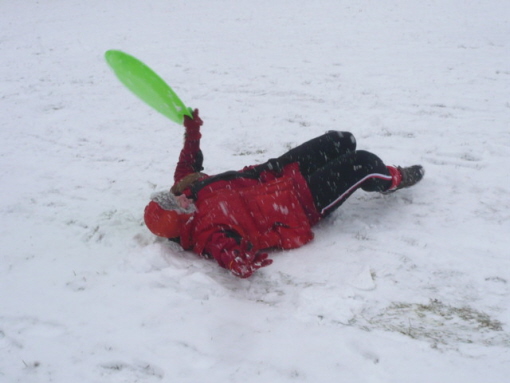 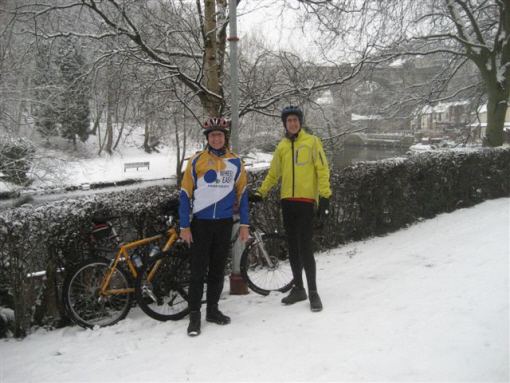