At one point we thought slow short ladies would out number fast Lycra swathed men and Pete was out numbered 10 to 1 by cyclists. It was truly foul cycling weather….we were only missing the wind. However, a plan had been hatched and we set off….Beckwithshaw…. right to Pennypot Lane….by the time we reached the turn right at the roundabout, it was snowing. Jane had mounted a rebellion and determined that we should go straight on and straight home; straight down Grainbeck Lane; straight over Ripon Road; straight up Knox Lane; straight along Skipton Road and straight into a warm bath and warm clothes. At least 98 smug points gained….and some very cold bits. Thanks Jane and Sue for the support. CG

Most were daunted by the weather outlook this morning with just a baker’s dozen stalwarts raring to go.There was a sort of natural sorting out into three groups, and no announcement necessary as the Fast Boys disappeared in the general direction of Pately Bridge, whilst the Short Ladies went Beckwithshaw way, leaving the four of us to 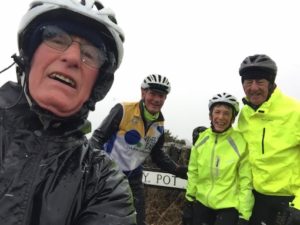 make up a ride as we went along.The wind was, at first, acceptable, coming in from the West, the direction which we had chosen to ride. Pretty cold, but no rain to speak of, and so OK.We too were off to Beckwithshaw and soon overtook the SG’s on our further ambition to tackle Little Almscliffe.The rain started, and of course the further up the altimeter went, the more the rain turned to sleet, and then snow. The conditions started to geta little daunting, but we were not daunted even when the slight descent at the top of the hill caused some problems with stinging eyes, caused by the snow.

There wasn’t much opportunity, nor inclination for conversation, so gritted were our teeth, but as Allison pointed out, we had a hidden bond which all cyclists experience.The top of Penny Pot Lane was reached where we stopped, and I asked the simple question: “Should we take this opportunity to head back Harrogate bound?”With one accord, and without any tangible discussion, the answer was unanimous.Further eyesight trouble was experienced until lower reaches were attained. James turned off towards Sophie’s as though magnetically attracted, and we three headed back into the easier conditions of the town.

Thank you Allison, James and Mick for your excellent company on what turned out to be quite a challenging ride. 20 Miles, 1400ft. and back at Hornbeam for 1100.   DaveS.

POST SCRIPT; Having now read the report below, we weren’t so far off the Fast Boys’ efforts today; well done team!!     DS

Well four silly sods decided to ignore the forecast and head to Pateley in the light rain. As we climbed up to Little Almscliffe into a stiffening wind some of us were wondering WHY.Still we pushed on until reaching Menwith where the four snowmen of the apocalypse thought better of it as a full-on blizzard punished us. Change of direction we hustled along to Hampsthwaite where the thought of sitting in wet gear and then having to come back out allowed to pass by Sophie’s and head up to four lane ends and on to Pennypot and the little climb past Michael’s where we split into a four-way star burst to go and get warm and dry. Thanks to Grant, Mark C and Fred for all thinking we could beat the weather and being proved wrong. 25 wet miles and a bit of climbing. PB