The weather forecast was good for January, and it looked like riders were determined to work off the Turkey and Christmas Pud and it looked like the whole of Wheel-Easy had gathered at Low Bridge, greetings were exchanged and riders went on their ways leaving the EG`s to continue talking. The “A” team thought that Easingwold would be a good choice and away they went. Wetherby was the “B” team choice so it was down the B6164 towards Wetherby, this can be a busy little road on weekdays so after Little Ribston we took a left to meet up with the old A1 and enter Wetherby via the cycle path, we were a smallish cafe size number but somehow the bikes found themselves in Morrisons Cafe, we have heard of self drive cars, perhaps we have self drive bikes. The return route was via the ridge to Kirkby Overblow always a pleasant if hilly at times route.

A nice shortish pleasant ride to help us in to the New Year.     DaveP.

When I arrived at Low Bridge it was like Piccadilly Circus, but without the geezer with the bow and arrow. I soon discovered they weren’t all EG’s but mostly wheel easy riders regrouping. I was tempted and followed the group to chain lane roundabout but thought better of it and retraced to meet the EG’s as they emerged from the riverside route.

We split almost immediately this group of John, Dave W, Marvin, Geoff, Colin and I headed towards Easingwold via Aldwark Bridge. We tangled with some of the other groups but after Farnham we were on our own enjoying the helpful wind under a grey sky. The route was remarkably straightforward considering Dave W was present. It felt like I had made the right choice, we are a mixed bunch but very inclusive (I hope) as is Wheel Easy of course.
It is good to ride in a disciplined group that are confident in each other’s riding. The only way that a group can stay close together is if the riders warn those behind of hazards and we do. It means that those feeling strong can ride at the front and those needing a rest can take full advantage of any slipstream that is available. So catching up and tales of Christmas past were punctuated with shouts of “Out” or “Hole” etc.
Easingwold was reached and as ‘The Curious table’ was full we opted for the Olive Branch or possibly tree any road up we pushed tables together and resumed banter. I was able to get a plug in for my ‘Everest’ ride in aid of Parkinson UK. On a day in June (to be announced) I plan to ride up and down Askwith Hill until I have accumulated 29,029 feet of climbing. As ever the conversation ebbed and flowed from predictable jokes to poignancy and what makes proper porridge. Updates on the injury list were shared and possible exercises for Dave S’s grip and wrist were alluded to.
The route back was direct, heading towards Boroughbridge into the wind which didn’t seem as strong as I expected. Even the sun came out and there were definite crisp shadows on the road. At Boroughbridge only John could resist the call of Morrisons for a top up and more chat. Manchester Velodrome was mentioned and Marvin was encouraged to organise another visit. The plan degenerated into being an excuse to travel in a mini bus so we could have a drink and a meal and the velodrome part was questioned but would be a good excuse.
Off again and back via Staveley some legs more weary than others over the last few miles we stuck together and said farewells.
A great day out with good mates who I see once a week at most. If the others are in the mood I happily make or try to make their legs hurt and push up hills until either they or I are gasping and the gap opens. But I would never deliberately drop anyone from the group, would give them my last energy bar if they were bonking (term for effects of low blood sugar) and stand in the cold while a mechanical was attended to.
Chris

A good day for a quick bike ride. Sue, Monica, Caroline and Surjon.wanted a quick bit of exercise so leading as ever from the back we set off to do the Ripley, Brearton,  Scotton, Lingerfield to Knaresborough with out the extra loop through Mountgarret s garden and boy was it easier than the other way round.  We had a very pleasant coffee stop along the river bank at Knaresborough.   A pleasant cafe opposite Marigold cafe that welcomes cyclists… and makes a decent coffee.  Surjon joined us but had to surge off. We sped effortlessly…no wishful thinking….up Knaresborough Hill as Monica had to get warm due to effects of temperature under estimation, Sue has to open her cafe for 2.30 and I had a date with some exercises. 20 pleasant relaxing miles give or take one. CG.

So today was my first day as  ‘official’ ride leader. A little trepidation on my part  proved unfounded despite the hundreds who had turned up to take part(well 30 plus). With my co-leader Alison N and dependable back marker Liz P I knew I was in good hands to ensure I didn’t make too many mistakes. Once the faster group departed the remaining 25 or so of us split into 3 further groups to head for Low Bridge where I thought a quick re-muster would be beneficial. Alison suggested ringing  ahead to warn Trancred of our numbers and approx. eta which proved a good call. Reminding Margaret of the correct route beyond Farnham she joined Chris R brisker team and disappeared along Abbey Road as the two remaining groups made a more steady ride out to Farnham, Ferrensby and Arkendale. Regrouping for the turn to Marton and onwards to Great Ouseburn. As we turned from Thorpe Underwood towards Whixley we noticed a bit of a head wind but the coffee stop was only 5 minutes away so it gave us an incentive. By the time we got there WE members filled the place. Despite 3 riders peeling of earlier there was still about 35 of us enjoying the café . With so many people service was a little slow which naturally split the departures. Some riders joined other groups which left 8 in my group being the last to depart. On to Whixley and the ‘un-manned’ rail crossing towards Walshford. Then on to Little Ribston where I departed as I live in Knaresborough , leaving 7 to make their way back to Harrogate. My thanks to Alison for keeping me on the straight and narrow and to all my fellow riders for making a very enjoyable ride in pretty good conditions for the time of year. Colin B 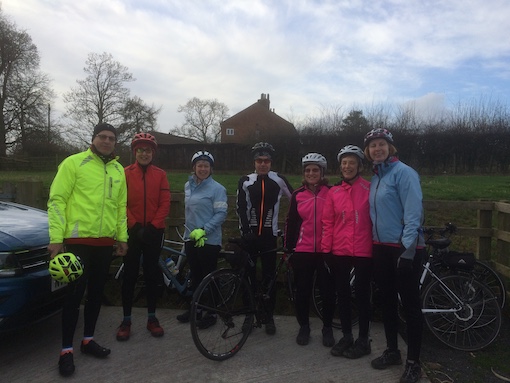 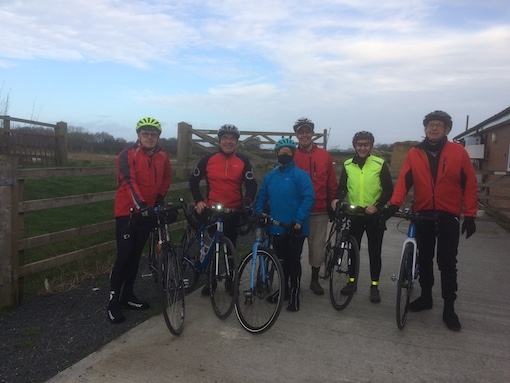 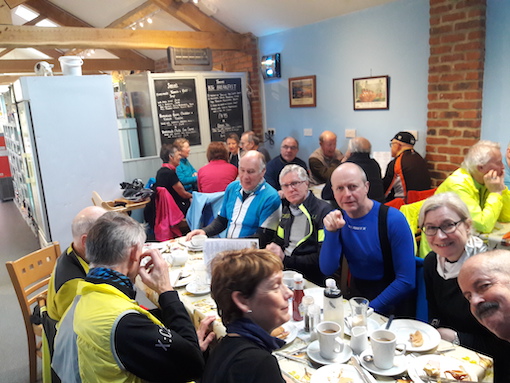 A nice dry day with clear views on our route to Bramhope today. The climb up Weardley Bank always seems hard but a pleasing achievement when you’ve done it. We made our way through Bramhope towards Cookridge and to a new cafe – Crag House Farm on the Otley Old Road. A very nice venue and good to see Kevin who is doing very well and hopefully will be back cycling with us before too long. Also Angela whose arm is in a pot after an unfortunate accident on her Christmas holiday in Jamaica. She was very cheerful and positive and we wish her all the best for her recovery. On leaving the cafe there were no really clear decisions on the route home,  but we followed the Otley Old Road and took the road down Pool Bank. After that the group agreed to go home via Leathley and Stainburn. Paul and Alan left us at Briscoe Ridge and we had a pleasant ride home including an interesting chat – some historical and gardening elements included – with the lady  whose house where we usually stop outside at the beginning of Rossett Green Lane.     Monica 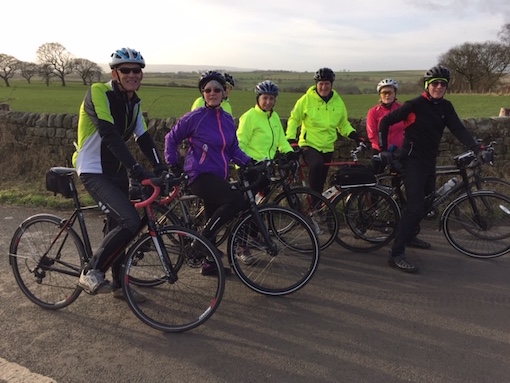 In keeping with increased turnouts for most groups at Hornbeam today, the Long Ride Minus ride was well supported with six regulars plus another four collected at Piccadilly Motors in Knaresborough giving a very respectable ten at the outset.  With recent news of the change of ownership at Tadcaster’s Lemon Tree tearoom we set off to support the new owners on their re-opening day.  Needing only one stop on the ride, the route was extended towards York to give a lunchtime arrival.  A tailwind, mainly, and a flat route made for fairly swift progress along familiar roads and soon we were saying farewell to Eric who had to leave at Cattal to resume his house move.  The final section to Tadcaster involved negotiating our second road closure.  Here the obstacle was genuine – a 3ft deep open trench fully across the lane.  Luckily the work gang was a cheerful one and after issuing due warnings allowed us to step over the trench and continue without the otherwise long diversion.  A slightly ragged last section into the town involved going contra flow on the A64 cycle path and bumping over the worn-out old A64.  On arrival the cafe was only thinly populated so we were able to occupy two tables near the fire – an excellent welcome as usual.  The new owners have taken over “asis” , keeping the previous menu and branding etc including the dodgy bike rack in the yard (see picture).  The staff were all new of course and we were conscious that we were part of their live training.  That said, service was cheerful and reasonably quick, in which we may have assisted by choosing the same items.  It certainly helped at the till as the electronic menu was still proving mysterious.  We hope that the first day of the new enterprise has cheered and encouraged everyone involved.  Opening hours may differ from previously – I think they will be closed on Mondays as well as the usual Tuesdays and we were asked to book ahead on Friday and Saturday if we were coming as a big group.  On this occasion we were nine.  The return leg involved some detours through Tadcaster’s less visited streets on the way to Bramham where we encountered our third road closure, again negotiated cheerfully.  From Wattle Syke roundabout we stayed on cycle paths around Wetherby as far as the Cowthorpe overpass finally pausing at Little Ribston to split, with 5 opting for Knaresborough and four for Spofforth and the Showground.  Wondering where or whether there would be yet another road closure, we were not disappointed when we found our fourth within the Showground, near the sunken bit at the top of the rise.  Easily avoided this time, it put a memorable stamp on the day and landed me with an unenviable (and undeserved) reputation of being someone who finds road closures.  Lesley thought it might be the same gang making a rolling closure just to add interest on a flat ride!  A ride of over 50 miles on a mild-ish early January day with glimpses of sun to light up some of the views is a bonus indeed.  Thanks to all who came along for an enjoyable day out.   Terry 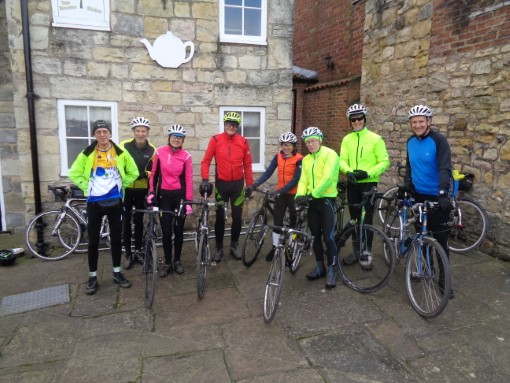