Slightly out of character I didn’t read the instructions properly so I missed the massed start of the Harrogate Homeless Project ride at Prologue, although with hindsight it was perhaps not a bad thing as Steve reported that there looked to be a lot of fast boys! Anyway a group of 7 Wheel Easy representatives, comprising Alison, Yvonne, Monica, Maris, Steve, Terry and myself, left at a leisurely pace along a modified route and worked our way across to and down the Greenway, through Nidd, Scotton,Farnham, Bishop Monkton, Littlethorpe and into Ripon. It was a sunny morning but very cold and by the time we hit Ripon there was no objection to a cafe stop, taken at Olivers Pantry. Suitable refreshed and warmed up the return took us through the Deer Park for a photo stop, on to Fountains, along Watergate Road to the Drovers where Terry left us for some more hills. The remainder headed home through Ripley, where it felt comparatively warm, and along the Greenway back into Harrogate. Lovely crisp and sunny day out with great views and good company – an excellent way to finish the year. Thanks to all who came and Happy New year to everyone who sees this.  James G 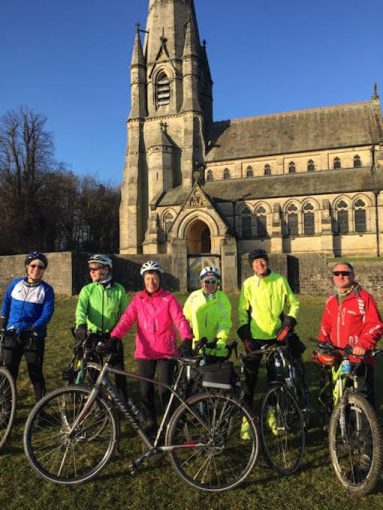 Eight persons of a sober disposition headed off for a coffee stop that was likely to be open – no easy task on 1st Jan.  Generally, the safe options were either a supermarket cafe or a high street coffee chain, factors that pointed to a market town. Our choice was Otley, to be reached by a somewhat hilly route taking us over Briscoerigg, the top half of Norwood Bank, Timble and finally High Snowden.  Not a bad haul for a shortish ride.  En route to Norwood via the gated road, we stopped on several occasions simply to soak up the view in the sunshine and on another to admire a wonderful display of thermal-ing by a couple of red kites.  With emerging views of the Washburn our ride had begun in glorious fashion, enhanced by the tranquillity of the countryside in the sun.  It was good to be out.  On reaching Fewston dam the scene couldn’t have been more different – no tranquillity here, as crowds and cars overspilled everywhere.  The climb to Timble was dogged by trailing traffic, some of which kept its distance to allow unpressured progress but others were not quite as patient.  Why use that narrow lane anyway?  At Fewston, Trefor and Eric left the group for an early finish, leaving six to take the high road to Askwith Moor and the descent to the village.  The hunt for coffee was now in earnest: past a closed Cockpit Farm and over the river, Otley too seemed to be crammed with visitors taking in the fine sunny morning.  A quick tour of a couple of the usual cafe haunts in the town swiftly led back to the supermarket/ high-street-chain options.  Fortunately, a table for six was found in Costa and needs were duly met, just before some of the hoards in the town also worked out that there were few options available for snacks or a light lunch.  Our picture shows what happens when three large coffees have to be drunk in a confined space. Elbows in please!  By popular acclaim, the route back was to be much flatter than the outward leg.  Pool was reached in swift fashion and before long we were regrouping for farewells in Kirkby O.  Here Helen and Vince took to Walton Head Lane while the remaining four opted for the bypass to the Rudding Park turn and thence to the Showground and that final kicker of a hill up to the Fitness Centre.  Here was the final parting with Andy and Tim heading along Hookstone Wood Road and Charlie and Terry wandering back to Hornbeam via NCN67, where a thoroughly enjoyable ride, despite crowds and cars, concluded after c 39 miles with 2900 ft ascent.  Well done to all who came – it was a bit of a leg-stretcher but the New Year is now fully first-footed (or wheeled).   TerryS 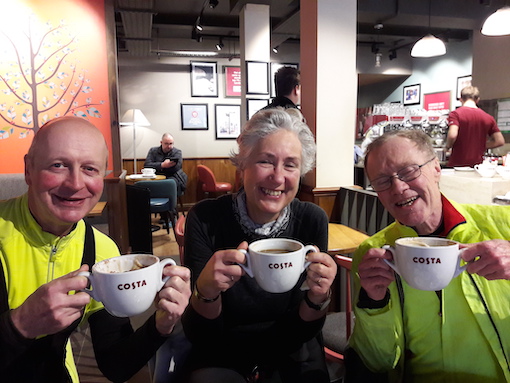