7 riders, Chris, Chris, Brian, Dennis, Sarah, Justine, and Paul departed from the showground. Roger had arranged to meet us at Low Bridge. He was talking to the EGs when we arrived. We passed several other Wheel Easy groups on our way to High Moor Lane where Steve joined us. Paul, Dennis and Brian headed home when   we stopped for coffee at Ripley. We bumped into Eric and Dave from the EGs outside the coffee shop. After a pleasant stop and chat we continued along the Greenway to Bilton Lane, where we all split up to make our way home. A lovely ride on a beautiful day, great company.  Approx. 19miles. Chris and Chris 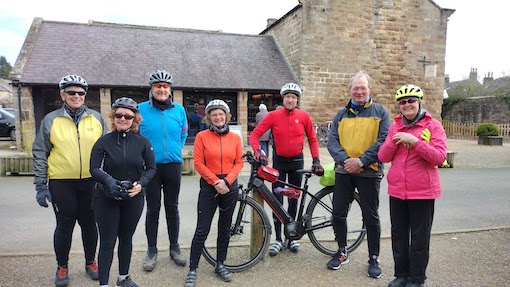 Only six intrepid Wanderers at the showground…..was it something that I’d said or my route! Numbers were swelled by 50% at the Bilton start of the Greenway, so we became a happy group of nine on the way to Ripley. Onto a rather busy A61 but not for long then onto the lovely resurfaced Nidd Lane. Whilst the loop onto the B6125 is rather a long way round I think it’s a safer way to get onto the Scotton road. Just out Scotton we came across riders on the short ride coming the other way, I don’t think they’d appreciate being known as short riders !?. Farnham and Ferrensby soon came and went as did Arkendale. Whilst the published route was through Marton-cum-Grafton, as it was a nice day we decided to extend by going onto Lower Dunsforth and on the nice lane through Aldborough to Boroughbridge. The refreshment stop was at Plenty, which did us proud. Mike Pyle stayed on in Boroughbridge to take a call so it was down to a group of eight. There were photo shoots at Roecliffe and Bishop Monkton and steady through Markinton and onto the Drovers crossroads then a good descent into Ripley where I was left as Billy No Mates to return along the Greenway as the others stopped off at the Boars Head in Ripley for a few pints, the men being egged on by ladies. 41 miles, 1750 feet ascent/descent. Michael Smith 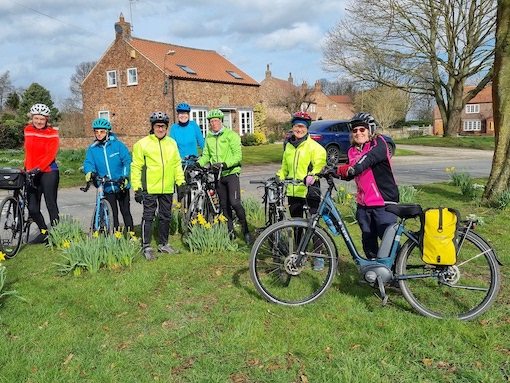 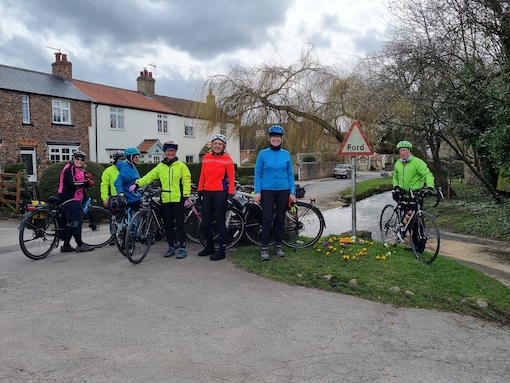 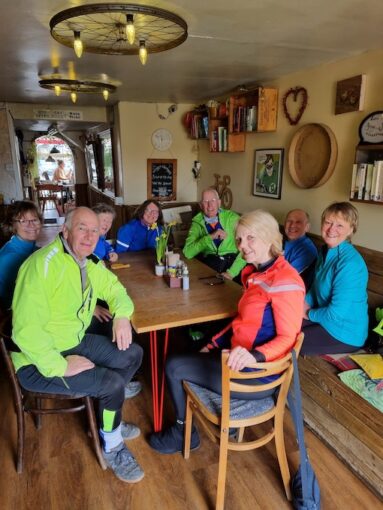 Kafquest (Thanks to Colin for the title, too clever not to steal!)

It was like Piccadilly Circus at Low Bridge, as well as the usual passing cyclists it seemed that most of the Wheel Easy groups started their days out with a ride beside the River Nidd. Good to see Lesley and Richard and lots of exchanged greetings!

As for the EG’s Eric and Colin arrived, both returning after injury, and our spiritual leader Dave P1 turned up; great to see him out on his new steed!  Eric and Dave P1 decided on a modest ride to Ripley while Dave S, Geoff, Colin and Chris B set off towards Beningbrough Hall accompanied by Paul on his new Mountain Bike which he is clearly very pleased with, enjoying it immensely and seemingly unhindered by the fat tyres. Paul had an appointment so soon turned off to enjoy some paths. We went via Scriven and in doing so we saw some of the Wheel Easiers again coming the other way! The forecast fresh wind materialised from the south but the sunshine seemed to be winning the temperature contest and it was warm as we headed out across the A1.

Crowds seemed to be the order of the day, no less than three hi-viz jackets at Aldwark Bridge. I wondered if they were expecting a busy day. The last time I tried to get through Beningbrough Hall the road was flooded but all that was left was the high water marked by drift wood and debris in the fields either side of the road. I hadn’t really noticed just how much the road through Beningbrough goes up and down until I saw part of it and the fence covered in water. No such trouble today and we sailed, in a cycling way, into the cafe.

We arrived in between breakfast and lunch which meant no hot food, so coffee and cake only on offer, baked beans were unimaginable. We decided to try the National Trust cafe at the house hoping for a better response and hoping we wouldn’t have to return to the cafe with our metaphorical tails between our legs.

Our travails weren’t over. Apparently, due to the size of Beningbrough Hall, the cafe is within the paid entry part so only paying guests can access the refreshments. The lady who greeted us was very understanding as she explained why we couldn’t visit the cafe without paying an entry fee. Dave S’ exaggerated faint, which he said was due to low sugar levels, was a bit over the top but it did the trick. We didn’t get the lady’s name as she put her hand over her badge! But thank you for taking pity on four pensioners.

I am sworn to secrecy about the next part of our adventure. Suffice it to say that we weren’t allowed in, we were forbidden to order food and drink; but had we been able to we would have sat inside the cafe with the sun shining in admiring the well kept gardens. If we had been able to sit and enjoy our repast we would have talked about life, the universe and incomplete b**ll*cks.

Dave S had to be back in good time so we opted for an anti clockwise route north west to Tollerton and Brafferton which was wind assisted. For the best part of 10 miles with a helpful breeze we really did sail along, what’s not to like? Eventually we had to turn into the wind which was cross or head wind for the rest of the day, tough enough to warrant an extra stop at Plenty while Dave S headed on to get back in good time.

The usual route back to Sandy Bank where the three split. An eventful day, great to see friends old and new, some out again after enforced absence. Getting on for 50 miles, more for some at 13 mph ish. 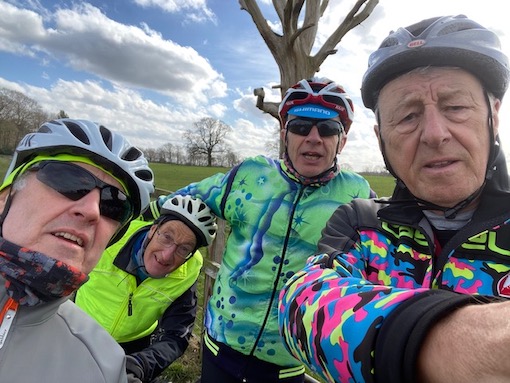 15 plus(?) of the assembled, detached themselves as the ‘Wednesday riders’, and with a healthy mix of e-bikes and self-powered 2 wheelers, set off in 2 groups (the brisk, and the briskless) towards L Almscliffe before glorious views could be spied from Jack Lane.  The descent thereafter needed care, but the winter greasy roads had given way to drier and more stable conditions. At this stage all impromptu discussions about International Womens’ Day (yesterday) had just about run their course, and in the spirit of wokeful mild gender-fluidity, the group sped on, through the gated section despite the fierce headwind, to hot beverages at Leathley Farm café.   By this stage, the ambient temperature had risen to a level that justified fingerless cycling gloves (or so the sole wearer claimed) and it was warm enough to sit outside in the ‘car-port’ arrangement enjoying the delicious fare.  The return route via Castley and Dunkeswick, just left the A61 to cross, before we arrived in Kirkby Overblow  –  then a final split with the Knaresborough contingent (Tim and James) disappearing down the bypass, and Monica and Gia down Walton Head Lane and the remainder including Martin and John heading for the showground and home.   For most it was an enjoyable 32+ miles, reaching home by 2 pm.  Stewart. 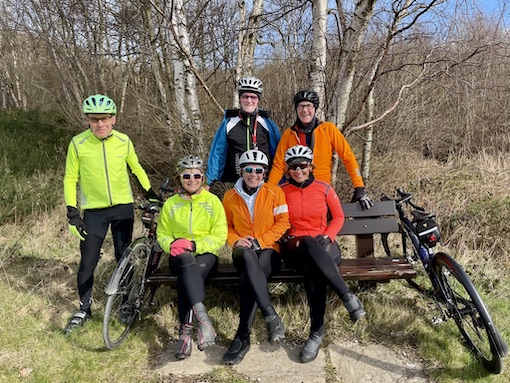 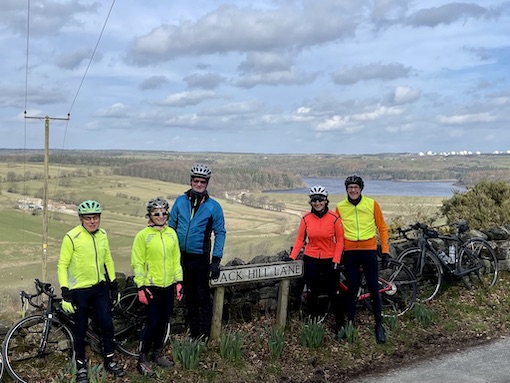 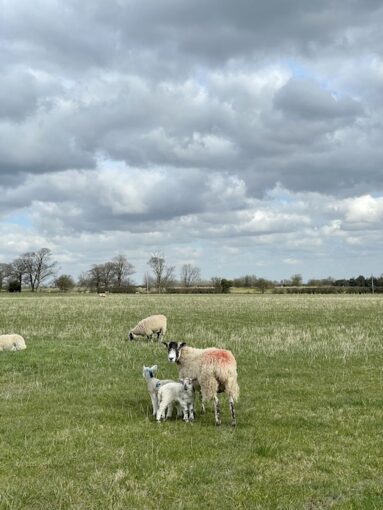 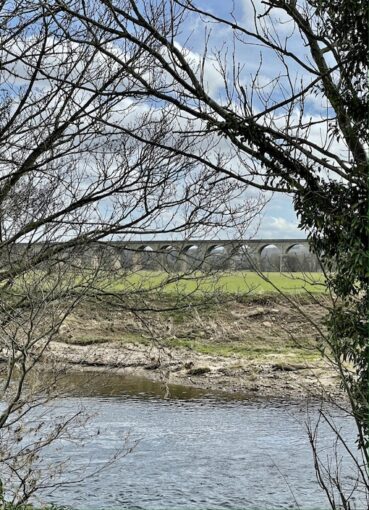 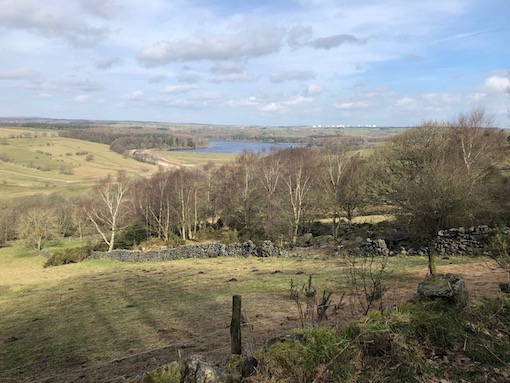 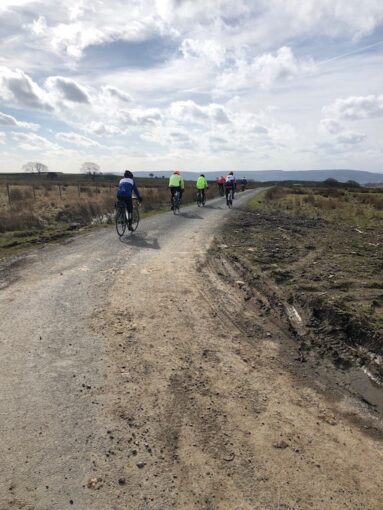 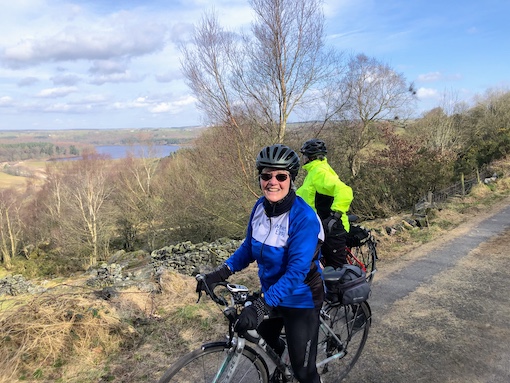 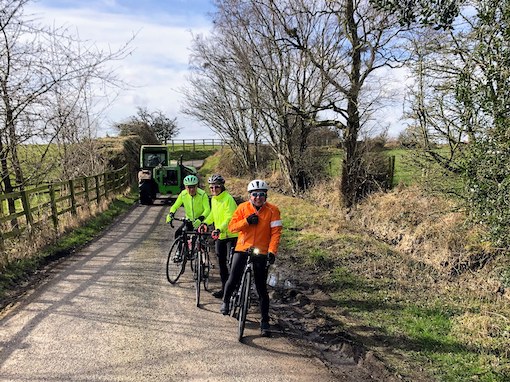 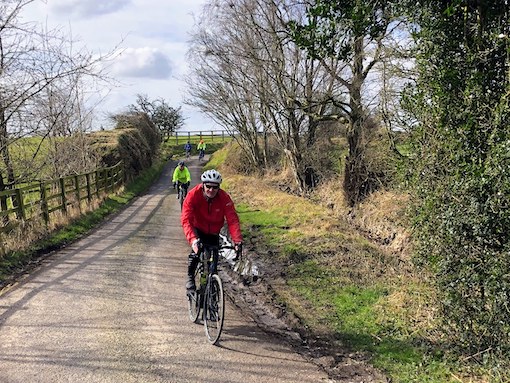 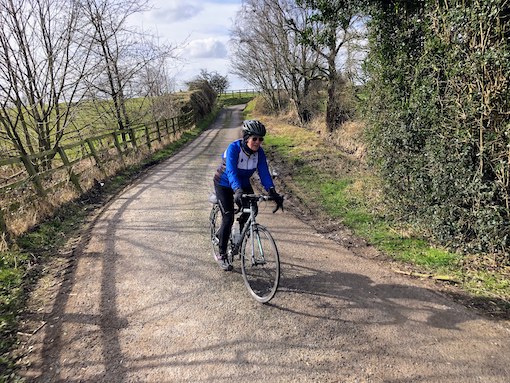