An excellent turnout at low bridge in sunshine and a slight nip in the air (see photo).
Our first coffee stop was Tancred Farm Cafe and away we went, the group split into the “A” team and “B” and for once a “C” team, comprising Bob Shears, Dave P and Norman.
At the old A1 Bob left us to head for Wetherby, Dave P being reigned in to head north instead of east, so Dave P and Norman took the small road past Northlands Farm, over the level crossing, across the A59 (so easy) into Whixley and north to the B6265 then south to Tancred Cafe only to meet the “B” coming north , so it was all in together guys, the “A” of course already tucking in to toasted teacakes.
After the teackes we had a small group consisting of Bill W, Dave P, Nick, Norman and Rob (nice to see you again Rob) headed north to Boroughbridge with the exception of Dave P who headed for home.
A well planned route in excellent cycling weather which catered for all riders and their requirements.
Dave P 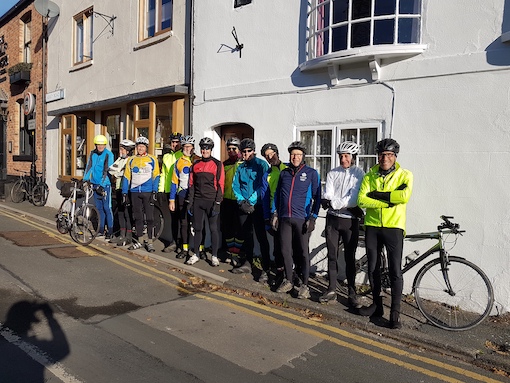 First stop was coffee and teacakes at Whixley Tancred Farm, an advance party of four joined one local EG, already present. The remaining part of the ‘A’ turned up with the ‘B Team’, having taken a different route. Time passed quickly and to prevent us just staying there for another overlong while in the convivial atmosphere of the whole congregation, five set off towards lunch. Over Aldwark Bridge and through Alne to Easingwold (Phil left us here), Crayke (jackets off), and left to Brandsby. We turned right and then enjoyed the rolling but generally down and scenic route with the Howardian Hills on the left, in brilliant sunshine.
Up in to Sheriff Hutton, our lunch stop was at Quarmby’s. Warm and welcoming service, more traditional orders duly consumed by the Team, now numbering six with the addition of Colin and Eric who arrived just a few minutes after the breakaway. A bit more expensive than many of the usual café stops, but we liked it.
The return journey headed more or less towards the setting afternoon sun, via Sutton-on-the-Forest, Huby, Tollerton, Alne Cross, Aldwark Bridge and the bench near Great Ouseburn. Here we debated (inconclusively and not for very long) an earlier start for forthcoming Winter Rides, and/or only stopping once during the Rides, for ‘Brunch’. Graham left then for Whixley. The remainder, Dave S (RadioShack), Dave W (Royal Navy), Tollerton ‘Roubaix’ Tim, Colin and Eric kept going to Knaresborough and beyond. Another great day of riding. Just over 60 miles starting from Knaresborough; about 70 miles for the Hillbillies.
Graham W

With our broomsticks at the ready, cats neatly stowed and our hats at a jaunty angle four Poddlers set off in search of a scone from the Bean Cafe, in Boroughbridge. The aim of the exercise was thirty miles(a well known fact concludes that going the easiest way to Boroughbridge will give you thirty miles there and back and any variation of route can add an other five miles or so), a lot of chatting and the afore mentioned scone….and butter. We waited for the invisible someone called Edna but noone appeared, bid the E G’S good day at Low Bridge, sped through Farnham,Occaney, Staveley to Minskip where we were fittingly greeted by a perfection of pumpkin lanterns and into the Bean cafe
by 11.12am. After an hour or so of deep and meaningful conversation we felt we should continue the ride through Roecliffe to the Copgrove path and onwards Mountgarrett’s s garden. On the outskirts of Burton Leonard, Barbara flew off to carry out some important witchery, and the rest of the covern made their way back to our cauldrons passed Nidd, Ripley and the Greenway, accompanied by the chief wizard himself who had just dropped through the ether from Sophie’s. Thank you for your company fellow witches and perfect day for a flight. 30 miles. CG 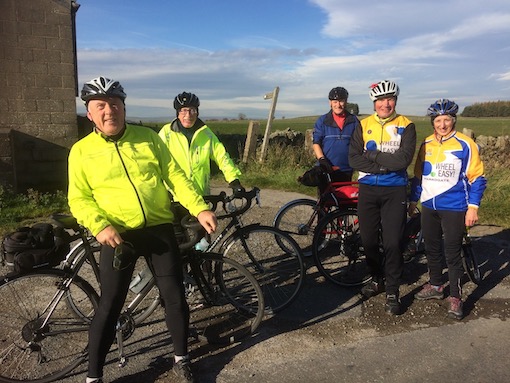 Following Sunday’s total of 3 for the Medium Ride, there was an order of magnitude more takers for today’s Wanderers (around 30). A couple of new riders at Hornbeam, including Chris and Vince. 30 is too big for one group, so Zoë took a faster group of around 10 and Alison took a second sub-group also of about 10, leaving six with Geraldine and me, including Dennis, electric Judy, Karen, Liz, David A and the aforementioned Chris. We agreed to meet Alison’s sub-group at the barriered road off Meagill Lane. Lovely blue skies and little wind as we took the usual route to Little Almscliffe, where the obligatory photo was taken. Past the Sun Inn and the end of Pennypot Lane and then down on the lovely-surfaced small road to Cobby Syke and up to the A59. The traffic was quiet for the 400 metres before we turned right on to Meagill Lane, and Alison’s group was waiting for us as we reached the barriered road. Glynn was there, but was not attached to any particular sub-group, and he seemed to flit from one group to another. The weather was still gorgeous, if a little chilly, as we passed Menwith Hill Camp, when Dennis left us to head back. There was some slightly flaky leadership when we headed right towards Kettlesing, but Geraldine(!) took us back to the right turning along Staupes Lane and down into Kettlesing Bottom. This part of the Nidd Valley looks good at most times, but particularly so today with the autumn colours and blue skies. There was a bit of a climb out of Tang up to Swincliffe, but we were rewarded with a lovely swoop down to Hampsthwaite and Sophie’s, which was heaving with cyclists. Service was understandably a bit slow, but the flapjack was up to the usual standard. David A impressed with his knowledge of unusual words by knowing what a ‘thaumaturge’ is. Back up Clint Bank Lane and Hollybank Wood and then the Greenway.
About 27 miles CPS 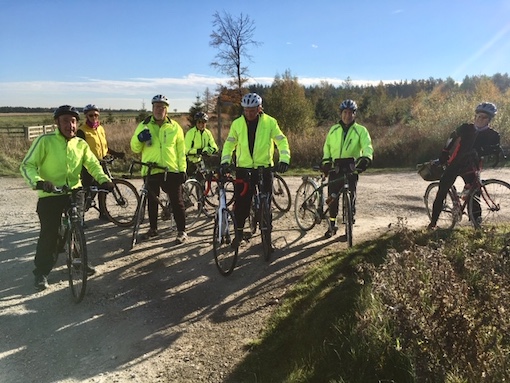 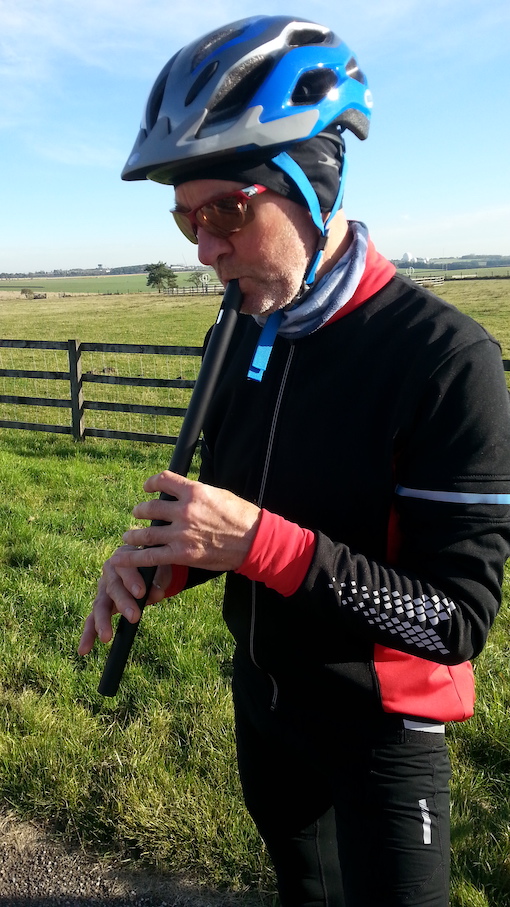 With Colin leading a ride to Bolton Abbey there was only a small group at Hornbeam for the Medium plus ride. Nonetheless we were still discussing the route as everyone else left.
Finally it was decided to head off to Brimham Rocks via Stripe Lane. We set off on a clear but cold day but we soon warmed up with a brisk pace and steady climbing up to Clint and beyond.
After the descent of Stripe Lane Gia and Paul headed back for other duties and the four remaining headed up to Brimham Rocks. There was some great views which ever way you looked and we then made our way to Fountains Abbey via Sawley and the back way into the Visitors Centre.
It was not too busy and we enjoyed coffee and a chat and also the discussion as to where to next.
With such good weather we headed for Boroughbridge via the Racecourse and Skelton and then back via Knaresborough into Harrogate.
A ride of 43 miles with some varied scenery which showed of the autumn colours of the area.
Thanks to James for the route guidance and everyone who joined us on a beautiful autumnal day- and not ghoul or spook in sight on Halloween!
Kevin

ivers, we set off for Garforth Station House Cafe choosing a brief diversion to the west before approaching Kirkby Overblow from Walton Head Lane. Barrowby Lane afforded excellent views over Lower Wharfedale; like last week, the clear autumn air gave us distant views for most of the ride. Linton, Collingham and Thorner were soon behind us and, after negotiating a crossing of the A64, headed for the marginally quieter lanes through Scholes and Barwick to Garforth Station. Here, the Station House Cafe is a gem. Italian throughout, the menu and the cakes were excellent. Equally interesting is the house itself – the former station master’s house and still recognizable as a house, with every room having dining space. Just a few feet away from the window of the cafe is the active station platform past which trains rumble by at regular intervals. Plenty of interest at this venue. Light lunches put away, the next leg of the ride was the least pleasant as it used fairly busy A roads and B roads to Tadcaster via Towton. We paused at Towton Battlefield to take in the info board (see picture) and concluded that the Tudors were early English exponents of fake news about the Wars of the Roses (victors write the history). For once, Tadcaster did not get any custom from Wheel Easy as we pressed on towards Rudgate and Cowthorpe. Unfortunately, a hitherto smooth ride ended in ragged fashion when Richard S suffered a puncture and he and Lesley got separated from the main bunch – black mark for the ride leader! Two doubled back to assist but group cohesion had gone, leaving three to continue to HG while the remaining four made their separate ways home. An enjoyable ride, nonetheless, with sunny skies and some warmth to go with them, but the chill quickly re-asserted itself as the sun dipped or whenever the odd cloud got in the way. Mileage was a respectable 56, giving a timely finish at around 3.00 pm – a good pattern for the coming winter cycling season. TerryS 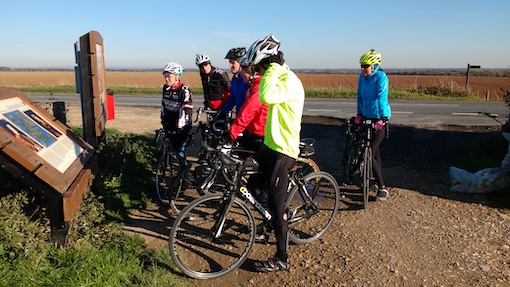