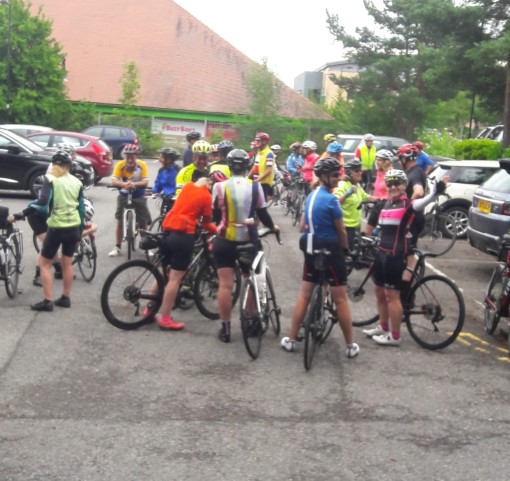 Nice to see over 35 at Hornbeam today and plenty of choice of rides. Good to welcome new member Stuart to our ride and Andy.

We had a wonderful short ride today ably led by our leader, Mr P. Good also to welcome Peter B back into our fold after an absence of a few weeks.

We reminded ourselves of the Wetherby Morrison hospitality , and enjoyed the iconic Yorkshire view over Wharfedale from Clap Gate at Sicklinghall. Return was via Pannal, and led to an impromptu inspection of Eric’s remodelling exercise. Refreshments were not available due to lack of kitchen.

Thanks to Dave P, Bob, Dave W, Geoff, Chris and Peter B. It’s the people that make these days so special.   Dave S. 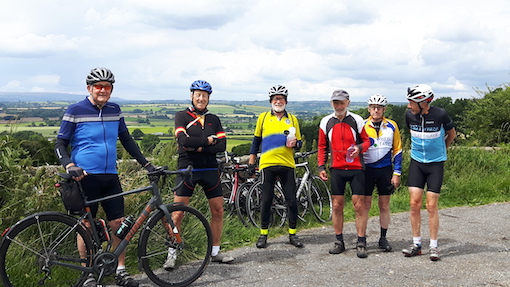 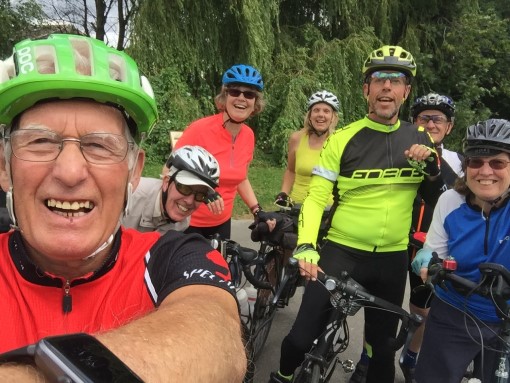 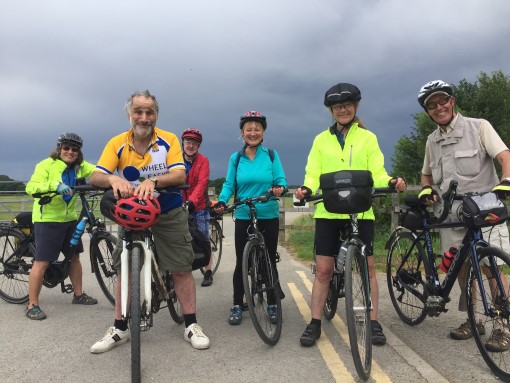 The weather was not promising but a hardy band of Wanderers turned up at Hornbeam (for the last time). We split into two groups – faster (some with electric help!) and less fast (with no help, other than Dennis’ electrified front wheel). Route 91 was a welcome change for some, but probably slightly longer than the advertised distance and less flat than some hoped for. The faster group waited for us but were then lost as they (inadvertently) cut a corner off the ride. I think they just wanted to get to the WISE café at Boston Spa first to ensure a good selection of cakes was still available! Whilst there we were photographed for their publicity (see photo) and possible fame. Discussion was had about the return route, but our group did as advertised, enjoying the beautiful new surface of the cycleway from Thorp Arch to Wetherby, and the somewhat improved path onwards to Spofforth. We were chased by a thundercloud but just managed to avoid the rain and conquer all the inclines. It was lovely to be out with the group again and well done to newcomer Nicky who rapidly progressed from a ride to the shops to 35 miles! Angela Rickards 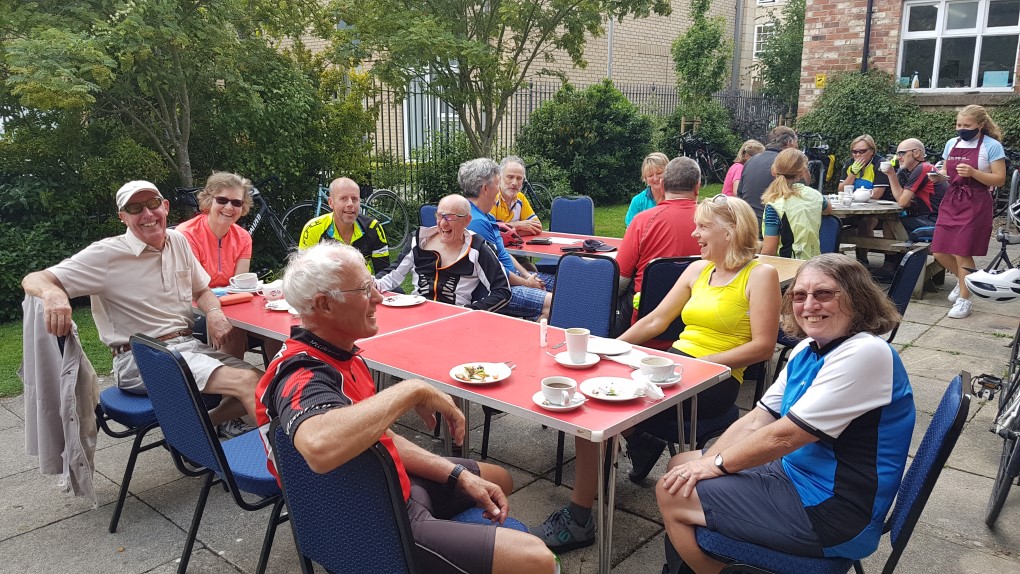 Wonderful turnout for the final ‘grand departe’ from Hornbeam. Fourteen riders for Angela’s route so we split in to 2 groups of 7. Ours was first away comprising 3 electrics and 4 manual !!. Corinne, Sally, Liz P, Mike W, Mike C, Richard and myself. Mike W had been delegated as our group leader and under his stewardship we made good progress to Burn Bridge and Kirby Overblow. We were never far apart but took the ‘regroup’ option to ensure we were all happy. On to Sicklinghall, Linton and Collingham . Up Jewitt Bank and into Crompton Lane. We then ‘forgot’ about the right into East Rigton and Thorner but went straight into Bramham Clifford and Boston Spa. Angela had told us she’d rung ahead to warn The Wise Owl of our attendance for coffee. Tables had been set outside and very pleasant and brisk service followed. We had all received our refreshments when the second group arrived. The usual WE chats took place which are always convivial and entertaining. As the forecast wasn’t too promising we deviated from the official route. So heading for Wetherby along the resurfaced Harland Way we picked up the cycle path along the A168 towards Cowthorpe. As we swung for Little Ribston the first spots were felt and the rumble of thunder was heard. Thankfully it held off as we split into 2 groups at Little Ribston. I took 3 others towards Knaresborough where we split again at Low Bridge and home. Great ride. Great company. Thanks to all. 34 miles for me. Colin B 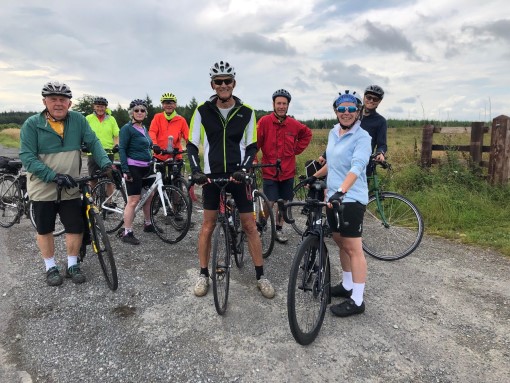 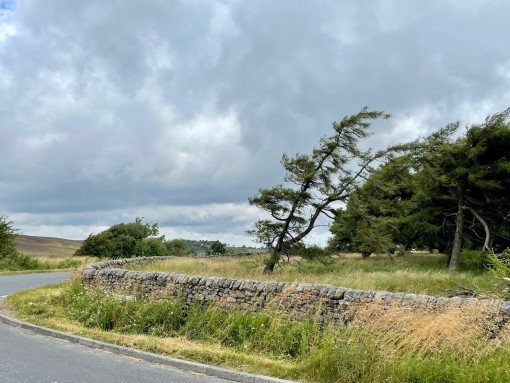 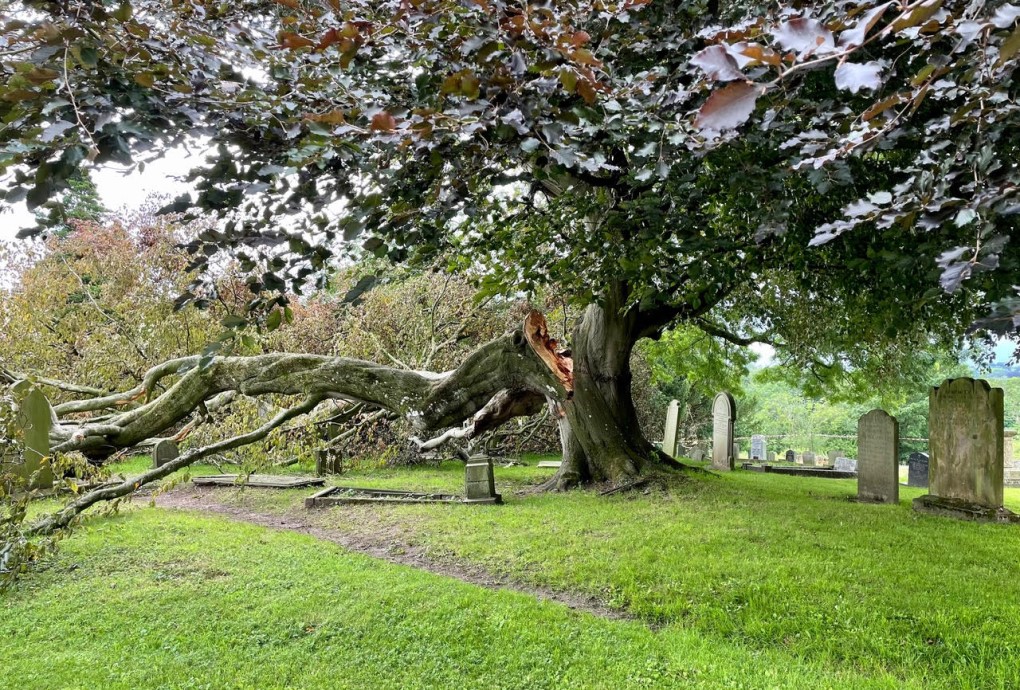 Dramatic pictures of tree at Ripley and view at end of Meaghill Lane, thanks Yvonne D for these.  First stop at Mackenzies for coffee then Duck Street, Love Lane where Monica had a mechanical. David rescued her and the rest of us continued with varied routes all getting home before the brief rain fall. Good ride, company, café stop and views. Gia

Route 98 for 6 riders – Tim No. 1, Trefor, Andy, Vince, Zoë & Tall Tim. We shunned the delights of a climb up Peat Lane from Pateley in favour of Greenhow Hill. The traffic lights are still there and a red light ruined Zoë’s attempt at a new Personal Best. Thereafter rain jackets were on & off as we journeyed down to Burnsall, along past Bolton Abbey and headed to Ilkley looking for an indoor venue for refreshments. A cold restart and back via Pool & Kirkby Overblow. 60 miles & 5,050 ft of climbing. Tall Tim 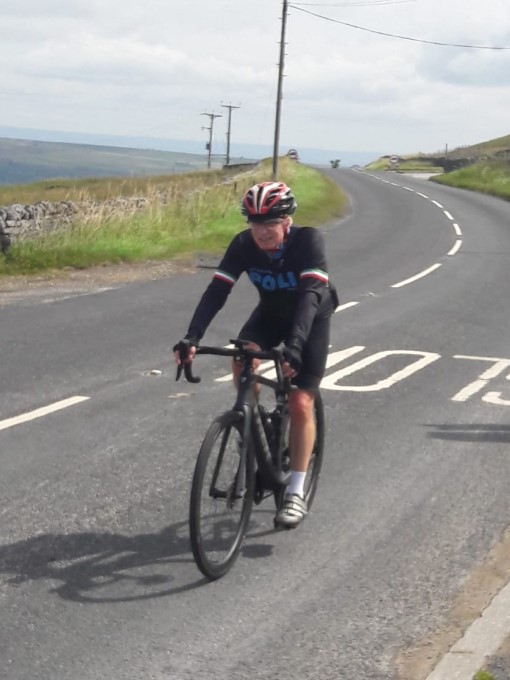 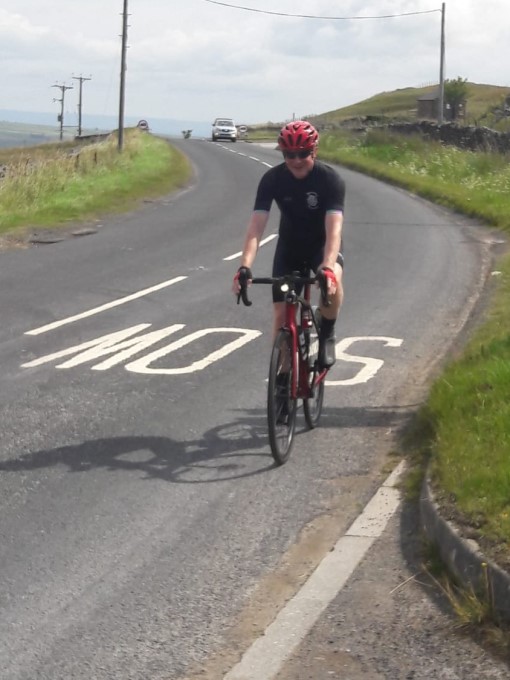 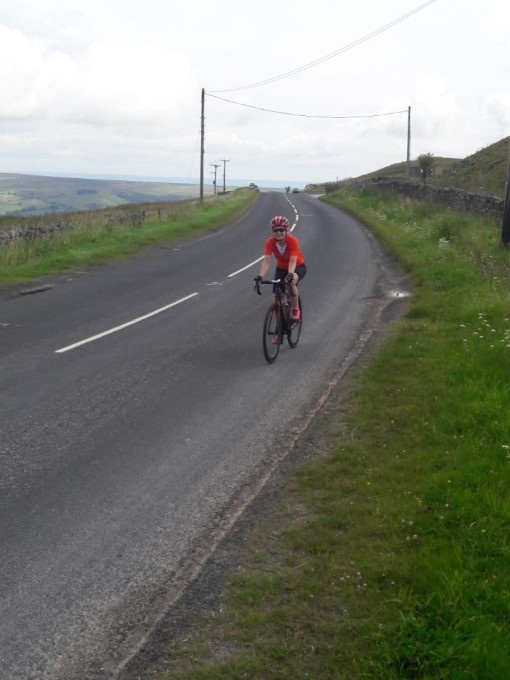 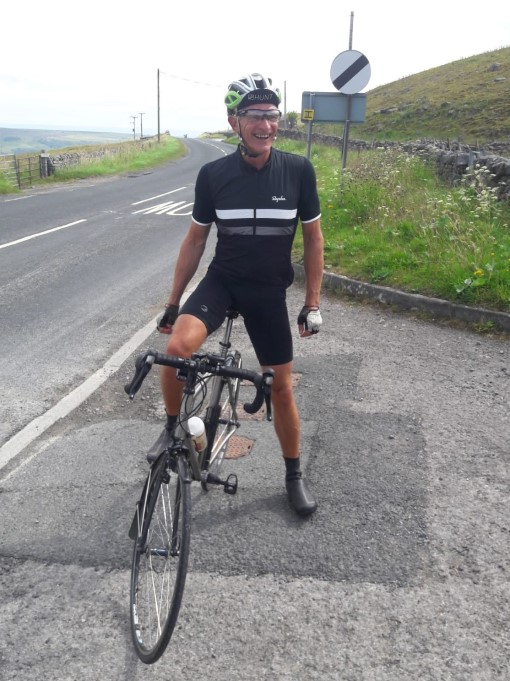