Mike W, Liz P, Margaret and John le Boot joined me and we set off down to Bilton, onto the Greenway and then to Ripley. Sue had warned us of the slippy muddy cattle grid at Ripley leading into the carpark, which we all negotiated safely. The ride through Hollybank Wood is always pleasant the trees still looked autumnal but had shed most of their leaves onto the path.

On down to Birstwith, where John left us for home and the four of us carried straight on to Darley. Weather was not too unpleasant with light drizzle as we turned up Walker Lane, unfortunately I missed the turn down Crake Lane. The highlight of the day was Margaret’s encounter with the police. At the top Margaret had not unclipped and fell sideways on to the wet grass, Mike leaned over to help her up as a police car came round the corner and stopped, ‘Hello, Hello what’s going on here’. Margaret explained to the two policemen she was okay and promptly started to undress as she was too hot, much to their amusement as they did not seem to be in a hurry to move on and turned round and came back as Margaret was still adjusting herself.

After a realignment of route we turned left and then right onto Thornthwaite where the mist descended, though it is a lovely lane to cycle along. A very posh lady on a beautiful horse stopped to chat, amazed we were cycling in this weather. The horse had been a race horse and she said that she appreciated cyclists who wore fluorescent jackets as horse riders find it difficult to see cyclists in dark clothes. Along the narrow lane we cycled on then up to Stonehouse crossroads.

The road down to Thurscross was closed, but I knew we could walk across the reservoir bridge which was under repair, open to walkers, but closed to vehicles. Once safely across, the rain started to come down steady as we cycled on and crossed over the A59 at Blubberhouses. Now ready for a coffee we headed to Fewston Farm Shop over the reservoir. The first group of four had nearly finished when we arrived. They has seen the road closed signs, a person they stopped to ask said they would not get through and they decided to head back to Fewston not knowing they could have walked over the bridge. After lovely refreshments and good banter we left the café, the rain had eased and we headed for home. Margaret, Liz P and Mike via Penny Pot Lane into Harrogate, Liz F via Kettlesing, Hampsthwaite, Clint Bank, Ripley, Greenway. Around 34 miles with lots of hills on a misty mystery tour. 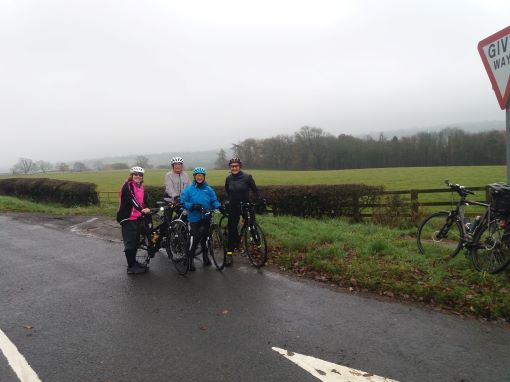 There was a thin crowd at Hornbeam this morning and as the routes started four riders (Zoë, Colette, Top Tim and Tall Tim) were left alone – an air of indecision hanging over them. With no other option hitting the right note, we finally set off on the prescribed website route – up to Norwood (where the fog became thicker and thicker), past Fewston, Timble and down to the A59 and up West End Lane.

At the turning to Thruscross reservoir were “road closed” signs so we asked some workmen who told us we couldn’t get across the dam. We couldn’t see as by now visibility was down to 20 yards or so. Back onto the new café (Breaks Fold?) to regroup only to find it was closed.

And by now the wind and rain forecast by Zoe the Wise was arriving – the nearest café was back the way we came: to the A59, past St. Andrew’s church and onto Fewston farm shop with conditions now reminiscent of the last day of the World Championships. Top Tim’s waterproof trousers were earning their keep. The weather had improved as our soggy feet disco-danced our way along Penny Pot. Only 33 miles but at times it felt a lot longer. Tall Tim L. 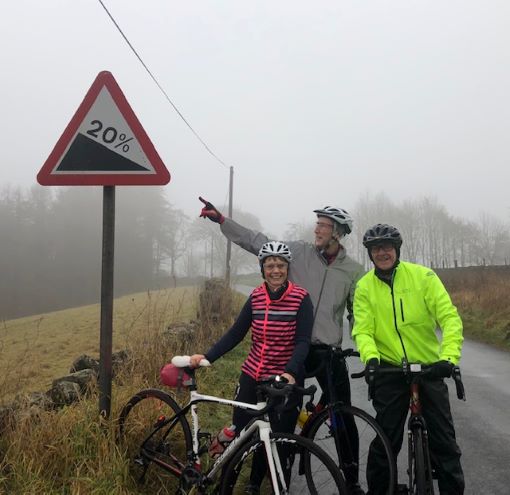 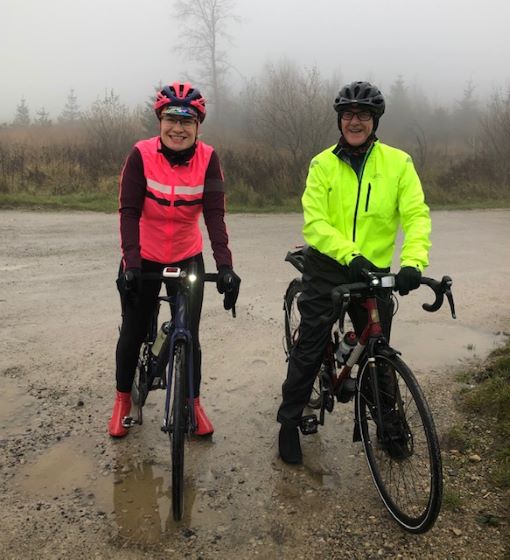 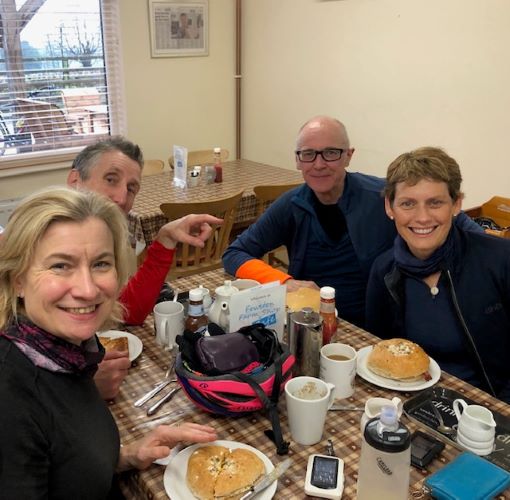 Here we enjoyed the warmth and good fayre at Bean before heading back via Minskip. We all agreed that while the rain was wet it was acceptable and it was warm rain! Paul left us at Sandy Lane, the rest of us rode through Knaresborough and for a final fling went to visit a new cafe and Refill station at the end of Grove Road. Recommend to anyone who wants to fill up rather than buying lots of packaged goods. see photo Thank you for the ride today, 33 miles. Gia M 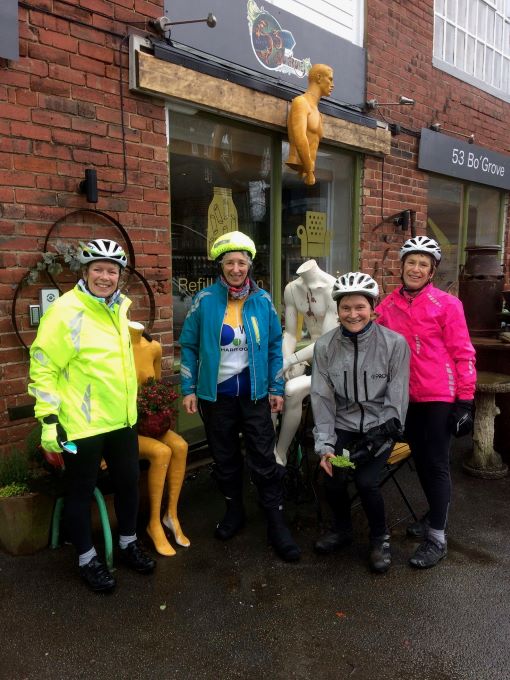 The weather and the forecast was a bit on the damp side as we began to gather at Low Bridge, as we waited we were joined by another Wheel-Easy group consisting of many old friends who we have ridden with in the past. This looked like a medium plus ride, quite a challenge in such weather.

We had eleven riders and a suggestion was made to head for Otley, with Wetherby as our first cafe stop. Away we went, the “A” team heading for the front and the three “B teamers” taking up their lanterne rouge position. On the way a group chose to go to Tadcaster instead so we had a group of seven in Wetherby.

After caffeine and lots of chat five riders headed for the Kikby Overblow ridge route, not easy in the best of weather but a bit difficult today, and for one particular VEG the climb up Sandy Bank hurt more than usual. Dave P

There was a fair old number turned out at Low Bridge this morning, despite the weather man’s doom and gloom, and it was pleasing to see also a large contingent from the Wednesday Ride members, who were mingling.

The usual destination confusion reigned with Wetherby, Otley and Tadcaster all in the frame. At least one member had disappeared from the group by the time the big decision was made after Little Ribston, when four of us favoured he generally softer option of Taddy.

The ride down in the drizzle made the Lemon Tree seem even more welcoming than usual today, and it was toasted teacakes all round.

An easy ride home via Angram gave us a ride of just under 40M and home for a shower and a dry off.

Thanks to Leslie and Richard, as well as Geoff for a very pleasant, if short day out.  Dave S. 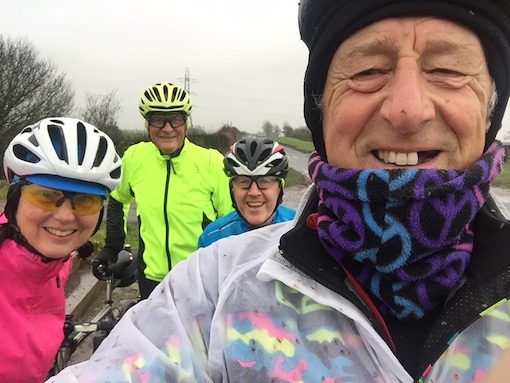