Although there was no nominated leader or route published this morning,by the time we had all gathered Mike and Colin had had a chat and had come up with a plan!! So nine of us (including John,a first timer with WE ) set off in rather chilly conditions to Low Bridge and then Little Ribston. The goal was Thorpe Arch cafe via Cowthorpe and Bickerton.

The pace was brisk mainly to keep warm and the hope that the heating would be on full at our destination.We were not disappointed and the service was swift and the food was as good as usual. Plenty of high spirited chat and plenty of friendly banter and insults flowing. Eventually we had to force Mike out into the cold again and off we went to Boston Spa, Clifford, Bramham and then Collingham, Sicklinghall, Kirkby Overblow and back to the Showground. A great ride Mike, many thanks to Colin for back marking all the way round. I hope John wasn’t put off too much by the unruly behaviour and will venture out again. Around about 38 miles and 2000ft climbed.Steve B 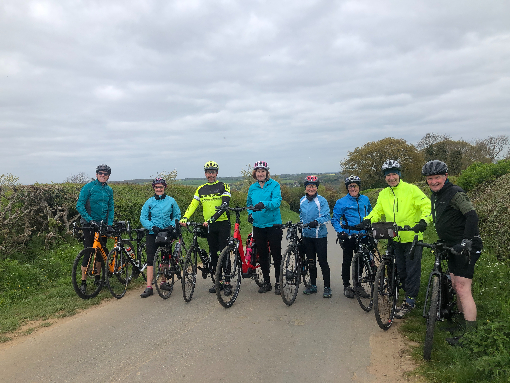 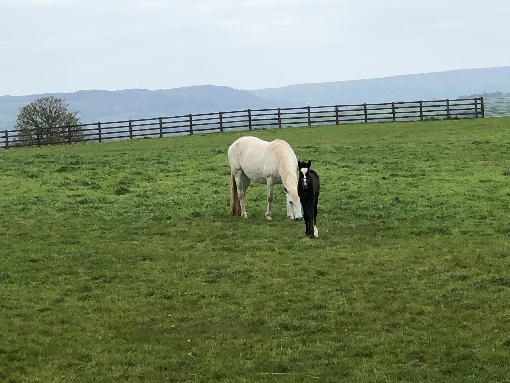 Route 200 out to the Greygarth Monument was completed on a rather chilly day. 43 miles in total for Julie, Zoë, Mark O, Tim No. 1, Andy & Tall Tim. It’s quite an undulating ride and most of the work on the front was completed by Mark & Andy.

We went off course to visit Tates at Ripon before a plunge back up the (completely empty of deer) deer park at Fountains, along to Drovers & then down to Ripley. 3,250 ft of climb – it felt like more. Tim L 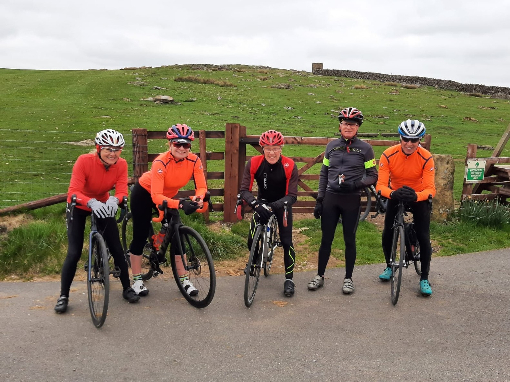 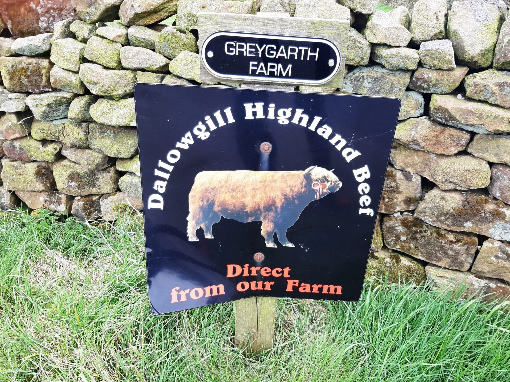 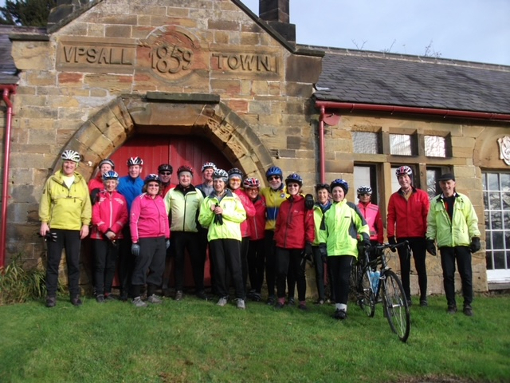 Today’s Away Day took us back into the recent past – Winter.  Everyone was hastily adding extra layers, hats and sturdy gloves until we looked more like a Michelin Man convention than elite cyclists.  The Fast Boys went first, followed by Keith’s group, comprising Liz P, Liz F, Corinne, Mike C, Steve and Al.  Then, 15 minutes later, I set off with James, Kevin, Gia, Charlie, a Tim and Peter B.

The first half of the ride was described as a meander along delightful North Yorkshire lanes, taking the long way round to Northallerton.  This caused momentary consternation at every junction because they all said “Northallerton 4 miles” yet we continued to turn in the opposite direction.  Twenty five miles later, we did indeed enter Northallerton, the centre of which was in total chaos, with roadworks and some serious upgrading of the Main Street.  It will be really nice when it’s finished!  However, we soon turned into a quiet street where lunch awaited us within the Joe Cornish Gallery Café.  This proved an excellent choice and we did indeed sit in rooms full of interesting paintings, photographs and art work.  In fact, I think some of the customers thought we were the art installation!

We knew the second half of the ride was to be hillier than the first and were not disappointed.  Although the day could be described as dull but dry, visibility was excellent and the many climbs gave us extensive views of the area below the Cleveland Hills.  Our final stop was in Upsall, simply to re-create the picture taken in front of the “Hobbit Door” of the old Joiner’s Workshop on one of the original Away Days in 2012.  We look as young and beautiful today as we did then, don’t you think?!

Keith’s group did the same and then Mike had to put his professional veterinary skills into practice to deter a very friendly young dog from following all his new friends back to Thirsk and risking an encounter with the traffic.

Our final reward was an almost uninterrupted descent back to Thirsk where both the steady groups arrived almost simultaneously.  It had been a most enjoyable day for all of us, mainly due to the meticulous organisation by Kevin, whose template for Away Days now works like a well oiled machine. 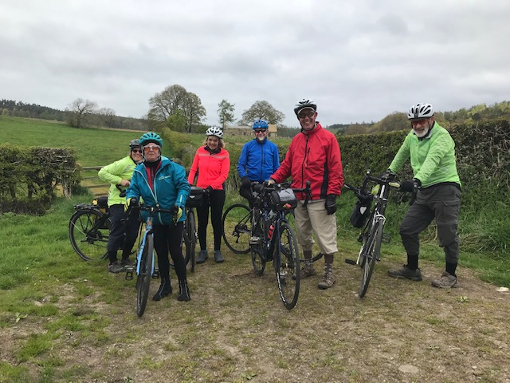 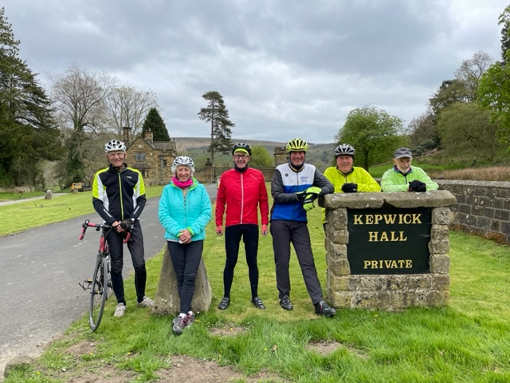 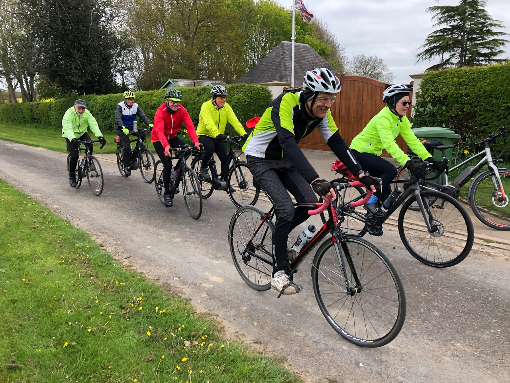 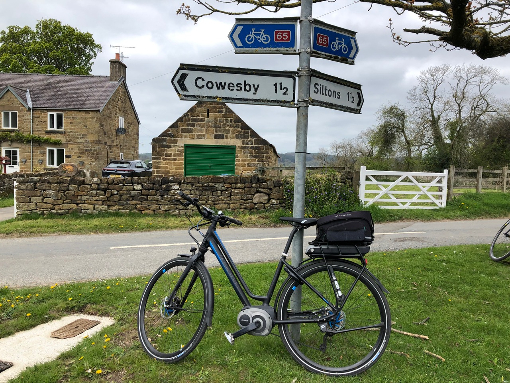 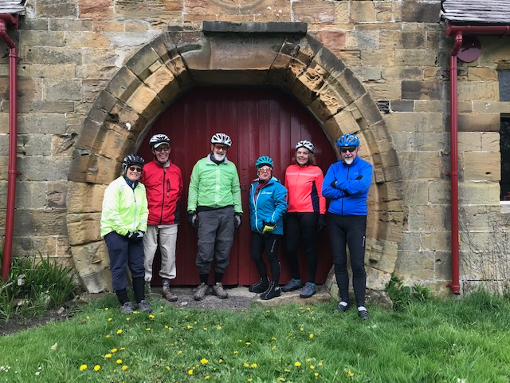 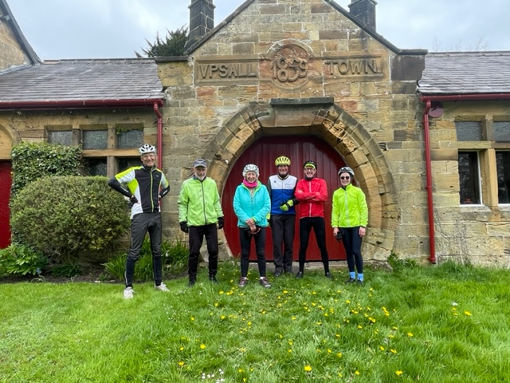