Four old men hovered at Low Bridge wondering where everyone was and trying to work out where
everyone went last week. Interrupted by greeting Bob who had decided to take a shorter ride more to his
liking we waved him and the rest on their way. That’s one of the great things about Wheel Easy! (Join the
WHEMPS* today, you know you should!) no one is too slow or inexperienced and no one is too fast
(even though some might think they are! As Dave S often says ‘If he can ride with us then anybody can’.
We accounted for those who were poorly, injured or on holiday and that accounted for most so we set off.
Taddy was the target where we would head east and see what happened. The wind was mostly from the
west and a bit of south so either helping or hindering a little. Much warmer than of late as we exchanged
stories of frozen hands and icy blasts. I sat on the front trying to set a pace that was within everyone’s
capacity listening to the chatter between Dave S, Geoff and John behind. We covered 15 miles in the first
hour. When it goes quiet I look round and if they are still there ease off a bit, if they aren’t there slow up,
other scenarios are available. Some days I can be battling into a head wind on the front and yet the chatter
from behind shows no sign of needing to pause for breath. I am sure Eric can do that circular breathing
thing, mental note to ask him if he can play the didgeridoo (get well soon Eric). In my mind I am smiling
Tim Declercq or Ian Stannard, oh how I wish! As far away as we are from the pro’s I do believe we can
learn from them when riding in a group and being as fast as the slowest rider, I look forward to group
riding sessions.
Without Dave W (get well soon me old china) it is safe to lead from the front and not worry about
missing a turn, usually the most unlikely ones. The usual route past Thorpe Arch to Taddy where the
Lemon Tree gently called Tea and T Cakes, we resisted encouraged by the thought of massive cakes
and/or baked beans in Askham Nicely so went left keeping north of the A64. Dave S and John enjoyed
the tail wind and took their turn at the front as the sun tried to break through the cloud.
Disaster and accusations as we arrived at Askham Richard the sign said closed until further notice! Who’s
idea was it to press on past Taddy? Who ignored the suggestion to stop for a hot drink? I kept quiet and
started to google cafes near me. What! One of our favourite stops, I do hope the closure is temporary, it is
thank goodness, they also do lovely honey.
We pushed on to try the Old School Cafe at Rufforth, I’ve been before with friends who live locally but
for some it was their first time and a pleasant surprise. A mix of cafe with excellent beans on toast, so
Dave S was happy, shop and museum; not to mention a warm welcome. We discussed politics again and
survived before heading west, this time no escaping the persistent breeze in our faces. Why does the wind
always get stronger when you turn into it? I got back into Tim or Ian mode the later who does have
something in common, we both have arthritis albeit different types, and no I am not on the waiting list as I
can still get my leg over my bike! We parted company at the Knaresboro’ road, another great day out we
did at least 50 smiles per hour.
Chris

Six cheerful members gathered with me this morning for the short ride – Bev, Paul Blackham, Paul Dean, Dennis, Bob and Brian. The weather was dry with a promise of a little sunshine as we made our way to Low Bridge. We made steady progress to Farnham and onto Arkendale, although we nearly lost Paul D to another cycling group as they turned off to Copgrove! At Arkendale we turned right at the church towards Flaxby. Much care was taken crossing the busy A59 but we all got safely across. After a photo in Goldsborough only four decided they would stop for coffee in Knaresborough. At Low Bridge once again we said goodbye to Dennis, Paul D and Brian while Bev, Paul B, Bob and myself continued along Waterside and had a pleasant stop at the The Black Mulberry café. Then it was up the Knaresborough hill from whence we went our separate ways. Thanks to all for your company and a pleasant ride.          Monica 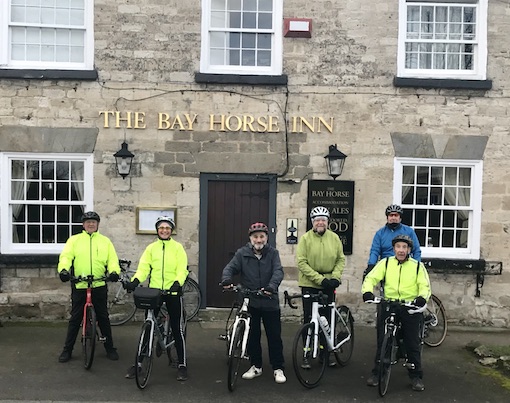 On a better morning, until later, than was forecast nine of us left the Showground heading to Ripley to collect Paul, and then onwards through Birstwith and up Stripe Lane towards Brimham where the forecast got it wrong and we battled with an ever increasing wind. Colette, who is still recovering from her second dose of covid and Mark left us we turned at the end of Stripe Lane and after a quick discussion at Brimham cross roads the decision was taken that the wind was too strong to head over the moor to Pateley and so we diverted towards Sawley and into Fountains for a well earned coffee and cake break and topical conversation. Returning through the Deer Park was as enjoyable as ever with great views of the Cathedral catching the sun and then through Littlethorpe to Bishop Monkton where Paul departed and the remainder headed into Knaresborough to drop me off for the second ride running! Just over 40 miles and according to Yvonne 3,284 ft of climbing. Some great views and thanks to Yvonne and Gia for the photos. Thanks also to everyone who came: Gia, Paul, Yvonne, Kevin, Mark, Colette, Tony, Tim, and Charlie,   James G 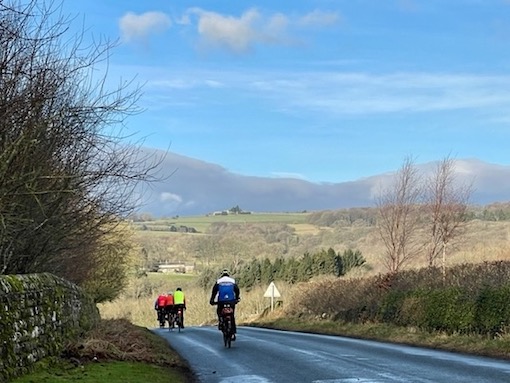 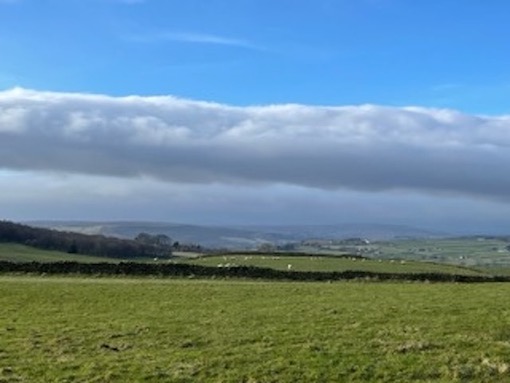 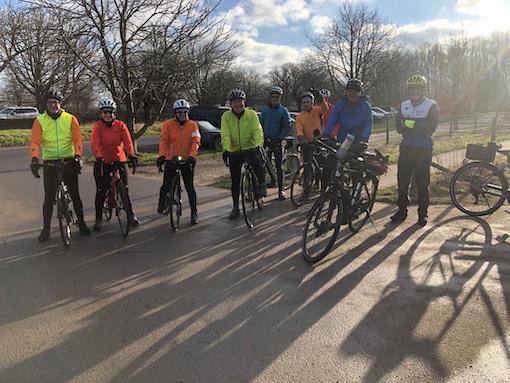 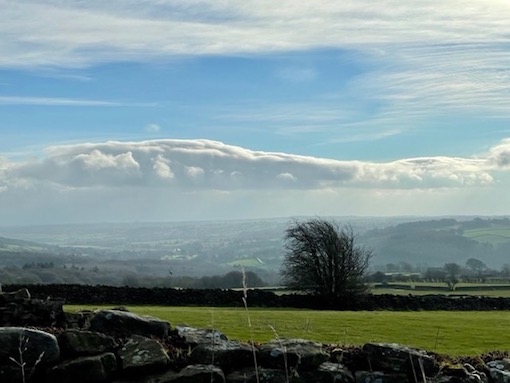 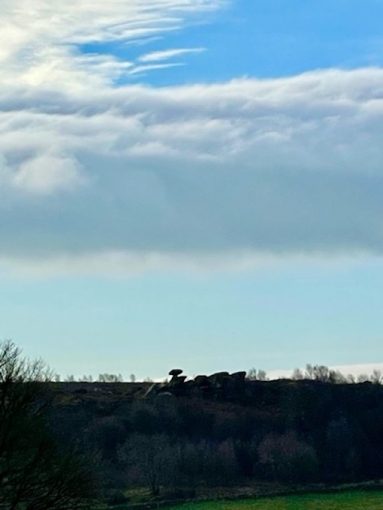 I knew as I left home it was going to be windy in places on todays ride, however eleven happy wanderers set off from the showground in benign conditions. Picking up another three at Bilton we headed to Ripley and then onwards and upwards into Nidderdale. We were greeted with windy conditions as we climbed from Darley to Dacre, which only intensified as we got onto Dacre Lane and Dike Lane. Changing from a challenging head wind to a dangerous cross wind. At the turn-off onto Braithwaite lane, in an attempt to stay out of the wind wherever possible, we decided to continue onto Padside, just another hill then onto Greenhow hill road. The Fewston farm cafe now came on the radar. Another couple of miles, predominately with a tail wind and we were there. Good food at a good price in warm surrounds was enjoyed by all. I took six back via the published route of Swinsty, Little Almscliffe and Beckwithshaw, with a great tailwind for most of the way. Others returned via Penny Pot lane. A good ride, although less wind would have been appreciated. 35 miles, 3550 feet ascent/descent. Michael Smith 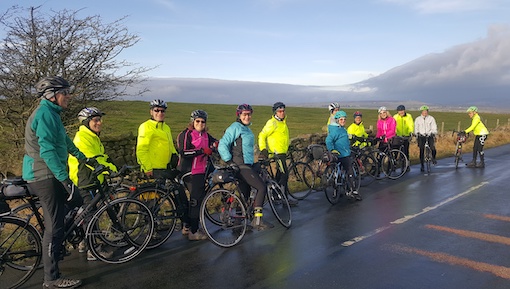 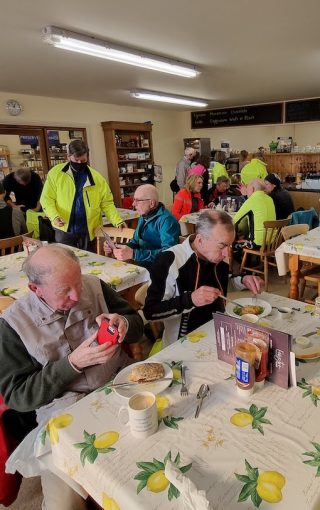