A pleasant day out

Nine cyclists gathered at Low Bridge, Bob was there to see us off and then do his own thing. He turned down our pleas for him to join us so we set off on familiar roads towards Taddy, destination Askham Richard. A one stop strategy had been chosen, no one threw in a late suggestion so we quickly agreed. The group split and reformed along the way as we enjoyed a light but mostly helpful breeze under grey skies; for the time of year the weather was as good as we could hope for and better than we could expect.

At Thorpe Arch roundabout we found two cyclists in distress, apparently one had slipped on a slippery patch or grating while the other went into him, both hitting the floor. They had moved on to the grass verge where we found them. There was nothing we could do as they had ordered an ambulance and help from home. It appeared that the help would arrive long before the ambulance’s estimated arrival in two hours.  We wished them well and a good outcome although it looked like one was in pain and had a bad arm injury. A reminder of how easily a great day out can turn sour in the blink of an eye and the sorry pair were in our thoughts for the rest of the day. If good wishes and positive thoughts make a difference then they will be fine!

We followed a Dave Watson regular route to the Cafe in Askham Richard via Catterton. The cafe was busy but with a bit of swapping around we had a table to ourselves, deciding to sit indoors. We took advantage of the generous ‘meal deals’ apart from those deciding on beans on toast. We then became embroiled in beangate as they ran out of beans half way through our orders, good job Dave S was in foreign parts as he is particularly passionate about his beans and we would have probably ended up making a serious detour to find some! Those who ordered beans unravelled their orders, who ordered first, who ordered what, which colour bread and was it with egg etc. etc. Those tucking into their very generous sarnies and cake, some into both, offered mostly unhelpful advice. Eventually everyone seemed to be satisfied with their food, they certainly provide generous portions at very reasonable prices!

Over lunch we pondered the fate of the two unfortunate cyclists we had met and the implications of ambulance waiting times on cyclists unfortunate enough to need one. On leaving the cafe Eric discovered that his slow puncture needed topping up before we set off.

We headed north west and as we did Paul and I considered the art of group riding. To ride effectively as a group and take advantage of shelter from those in front one needs to ride within what might be described as a safe stopping distance. The only way to do that safely is to maintain communication between group members, warn each other of hazards etc. At Long Marston Glynn headed back towards Wetherby. At the Tockwith cross roads we split again; Eric(mindful of his slow puncture), Peter and Dave P2 a more direct route via Cowthorpe and Little Ribston. John, Paul (having been released from Dad’s taxi duties), Geoff and I turned north eventually to the Ouseburns and Dunsforths. Then Geoff and Paul going home via Marton, John via Boroughbridge and me via Minskip.

John and I reflected on the day as we rode past Queen Ethelburga’s and agreed it had been a pleasant day. A word like pleasant can seem a little tame but today’s ride fitted that description in a good way. The fresh air, camaraderie and excitement of beangate had made for a pleasant day out on two wheels. Between 50 and 56 miles at 13+ mph. Chris Bishop 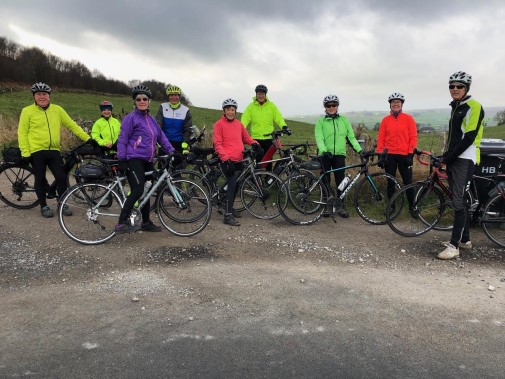 A large group of medium riders met at the show ground, and split into 3 groups, the first 2 disappeared into the distance! The 3rd group led mainly by James made its way towards Stripe Lane, the big climb of the day! After completing this, the cool conditions prompted a spontaneous shortening of the route with coffee at G T’s. Maris and Charlie made their way back, forgoing coffee! The remaining 8 returned by Sawley, and Watergate Lane towards Ripley, where Colin and John were greeted returning from their ride. A cool, but not too windy day on a bike, somewhere around 32 miles, and lots of good company. A good day for testing the new winter boots! Sarah.

Slight mash-up at the showground with the potato trade fair traffic but we sorted ourselves into many groups on a chilly autumnal morning. Our group of six followed James’ good pre-ride instructions from Ripley to Birstwith across Hartwith Mill Toll, up Stripe Lane and Brimham Rocks where we bade au revoir to Mark & Bob. The remaining four – Yvonne, Tim, Collette & Tony headed down through Sawley by Low Gate Lane up Hebden Bank to Fountains Abbey. We met up at Tate’s with birthday boy Martin & Yvonne W. who’d been running with the deer at Studley Royal. We democratically elected to return by Markington and en route randomly encountered a Harris hawk on glove as we left Ripon. Superb skies, great route, unexpected wildlife and lovely company. 42 miles, 2,726 ft. Yvonne D. 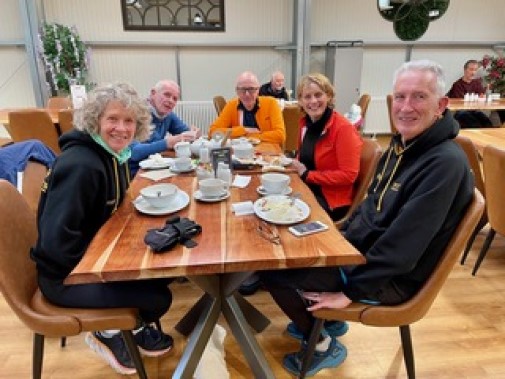 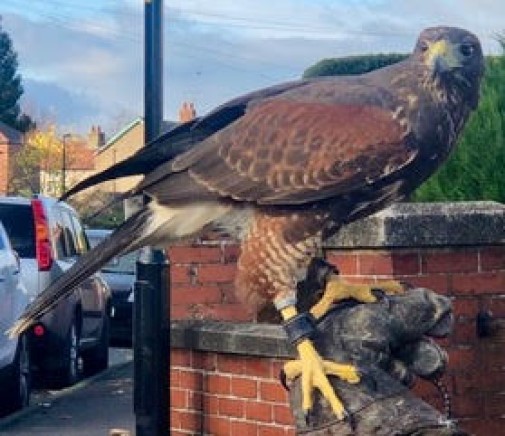 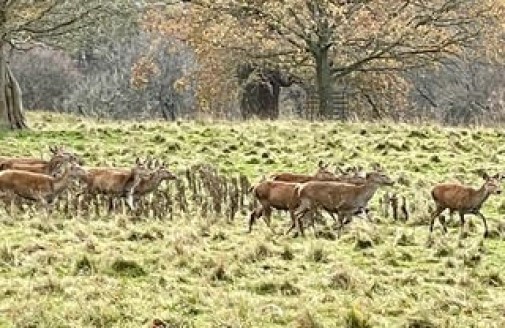 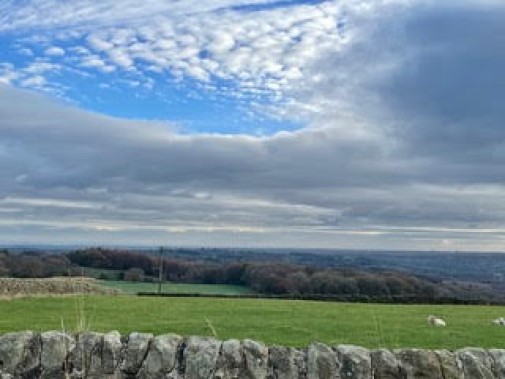 A beautiful autumn day alas no sun, chaos at the showground as the potato show was in town. I think I had ten potatoes when we set off to the Stray, on the Greenway to Ripley. Karen had a mudguard malfunction and decided home was the best choice and left us. Mike joined us and I still had ten. The climb up Scarah Bank soon warmed us up, down Watergate Lane then a sharp turn up to the Sawley Lane. Everyone was still with me as we cycled up to Risplith and decided to stop at G&Ts for a coffee. Liz and Paul left and eight of us went down the hill and up to Higher Grantley. Then a lovely ride up out onto the moor tops, the views were stunning, Mike S. went left as he had an appointment and seven went right. Turning down the lane to Greygarth there was a woman shouting very loudly in a field, as I was in front did not see the commotion behind. The womans dog saw us thinking we were rabbits on bikes and chased after us with this woman frantically chasing behind. A shout from behind to stop, Peter managed to get hold of the dog and luckily it did not cause anyone to fall off. It was like something out of a Carry-on movie!! Dog retrieved by red faced woman we carried on and climbed up to Greygarth. A brief stop at the top chatting about Mike W’s farming ancestors who had farmed in the area and Kings and Queens had come to the shooting estates around. Mike went to look at a mosaic which is part of the Nidderdale Mosaic trail. After gasps of oxygen, I assured all that there were downhills to come but a few sharp hills in between. The day was dry and clear and we headed towards Kirby Malzeard after a quick discussion we decided to go to Galphay and on to Tates for our second stop of the day, Steve carried on home and we were now six. Not to spoil a brilliant day but the soup was not the best and despite telling the waiter we did not get any response to warm it up!! Decision was home via Ripon, Littlethorp and Bishop Monkton. Mike, Colin, Sally and Peter carried on to Knaresborough and Stuart and I went via Markington, Ripley and Greenway. Hope you all got back safely and before the gloom settled in. Not sure of the mileage or how many hills, but a lovely day out many thanks for your company. Liz F 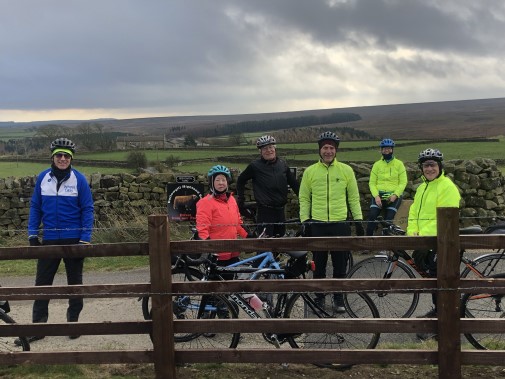 Two groups of 6 for Route 57 today. Helen, Zoë, Julie, Mark, Tall Tim & guest Rachael (who bravely came along with a 28 cog rear cassette) for the 2nd group. Lovely day when the sun was shining but chilly otherwise. An unusual stop at the Brimham Rocks Adventure Farm & then back via Careless House Lane to Ripley. 43.5 miles. Tall Tim. 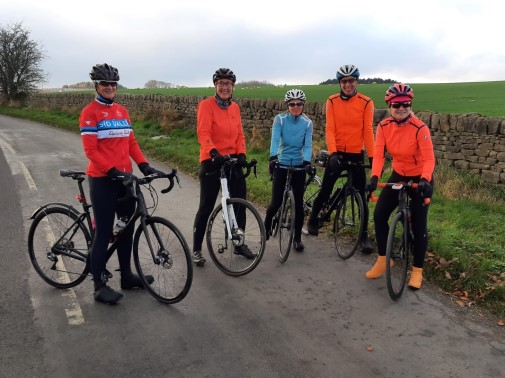 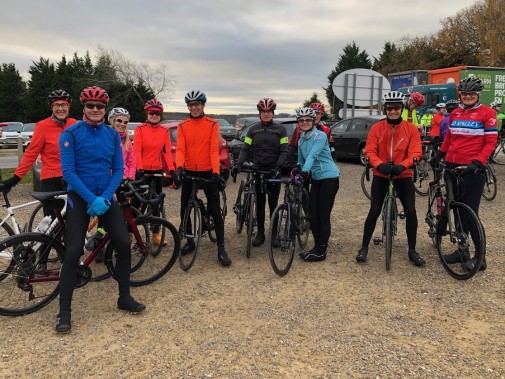 We were 12 takers for the Medium Plus (Brisk) at the busy showground car park – many of the usual crew, but also Graham (who has not been for a bit) and newish member Rachael on her shiny Pinarello plus a visiting rider, also Rachael, from Devon. So two groups of 6 worked well. It was a bit chilly heading out, but we soon warmed up and wound our way through Kirkby Overblow and out to Castley before heading up through the gated road to Stainburn. Coffee options were limited and we ended up at the Adventure Farm near Brimham after climbing Stripe Lane, but all was well once we refuelled and we made good time back to town via Ripley. 43 dry, if chilly, miles and about 880m of climb.