It was a good turnout this morning for the ride. The weather was milder than last week (thank-goodness) and the Sun was shining. The Wanderers split into three groups with myself, Angela and Duncan leading. We all rapidly over heated in the unexpected warmth! We cycled via Knaresborough, Scriven, Lingerfield and Bishop Monkton and finished our outward journey in The Bean Emporium in Boroughbridge. We all enjoyed refreshments and then cycled back (in ever reducing numbers) via Staveley to Knaresborough, Bilton Hall and into Harrogate.
Thanks to all the support given for my fledgling leader ride today. Lovely day.  Jane

What is it that turns a seemingly routine excursion into a highly enjoyable day out on a bike? Today was one such day. Starting out on a cloudy and chilly January day with damp roads onto a flat route (that we had all completed on numerous times), there was little to suggest that this would be anything other than a welcome but ordinary procession around to Ripon and then Boroughbridge before a quick jive through Lingerfield and home.

Mark, Tony, Mike (at Low Bridge), Zoe, Colette and Janet plus all three Tims trundled up past the tiresome Knaresborough traffic lights. The miles then flew past as we nattered away, round past Ripon and onto The Bean Vintage café. Good service, more chat and then back out into the now seemingly colder weather that had us all pleased to be wearing 3 or more layers. But then the sun came out and numerous stops were required as people started to shed layers of clothing left, right and centre so by the time we came up Knaresborough Hill it was more like a day in May and the time had slipped past so quickly.

So there it is. The individual parts don’t add up to that much but the overall assessment at the bus stop by the golf club was that it was “a grand day out”. Even the sight of Tony stripping off at Arkendale to display his magnificent torso could not dampen our spirits (the passing ramblers were quite surprised though). And for one of us it was a birthday outing as well.

39 miles for me and no climbing worth mentioning.       Tall Tim 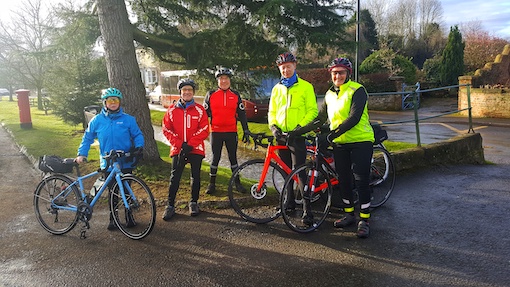 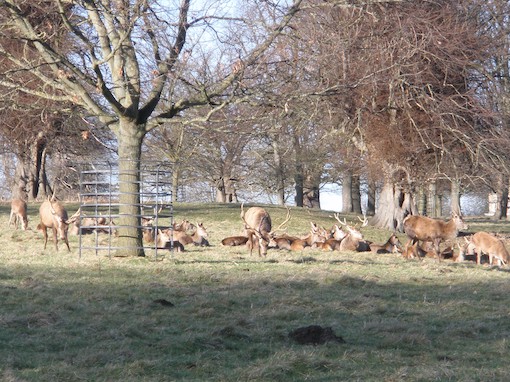 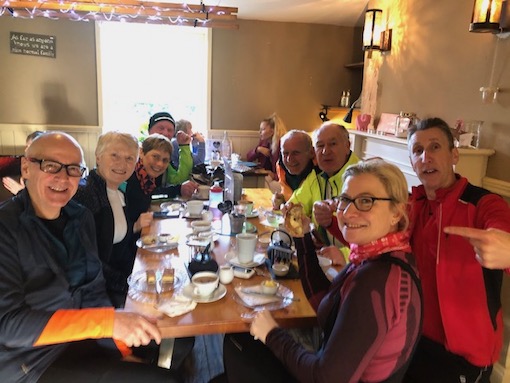 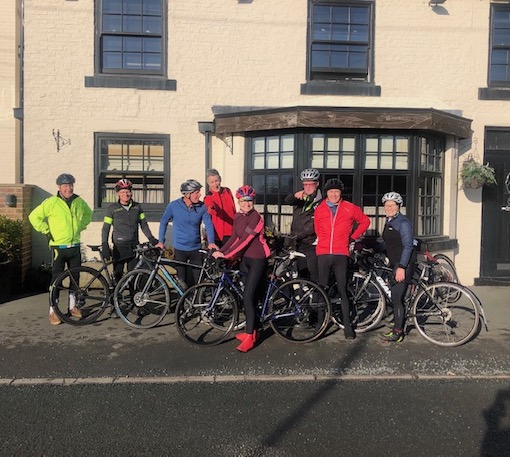 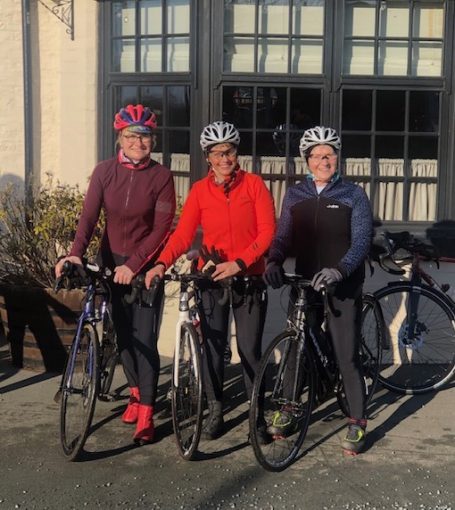 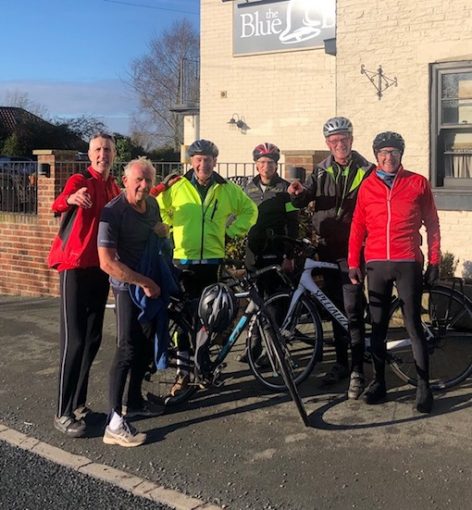 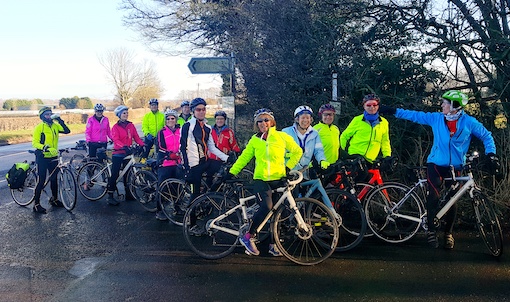 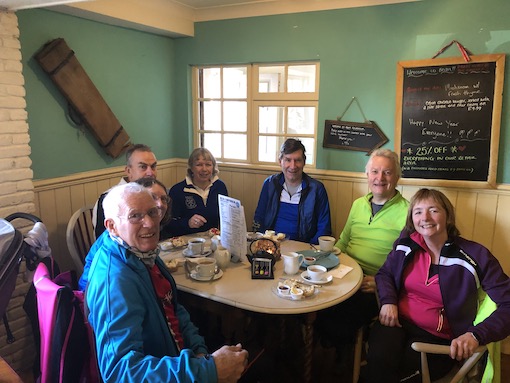 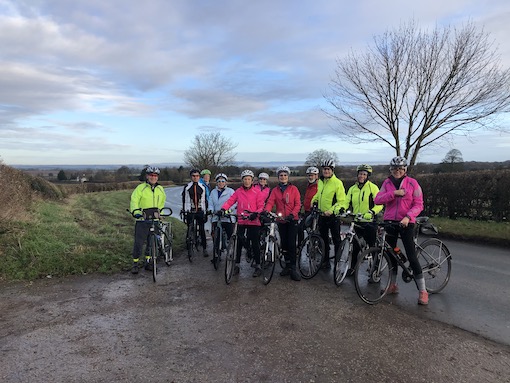 Wow, what a joy of a day! BBC Carol said a few would have some sun today & a few of us certainly did. The group starting from Hornbeam in light cloud but quite mild, grew to a respectable 12 by the time Ripley was reached. Up Scarah Bank & to Fountains village via Markington by which time we were in full sunshine, snow drops out in number, stripping off layers & the world was looking a nicer place. John was taking “one for the team” to cut short the ride to get ready for Travellers Tales tonight, thanks John (& Paul keeping him company). A glorious continuation via Low Grantley & Dallowgill Moor (unusually with hardly breath of wind) to Pateley Bridge & coffee stop at Wildings which we all enjoyed. Our return was via Bewerley & Glasshouses where Colin & I headed off up to Brimham Rocks via Smelthouses in very Spring like, idyllic conditions, simply perfect. The remainder of the group returning via toll bridge, Clint & presumably Greenway. Thank you to all the group for a great day spent together & whereas I am sure there is some winter left, this was a very special day. Alan S 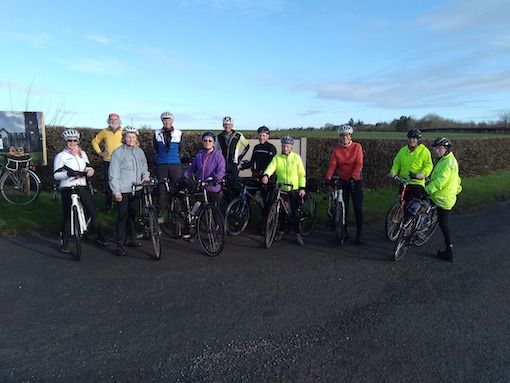 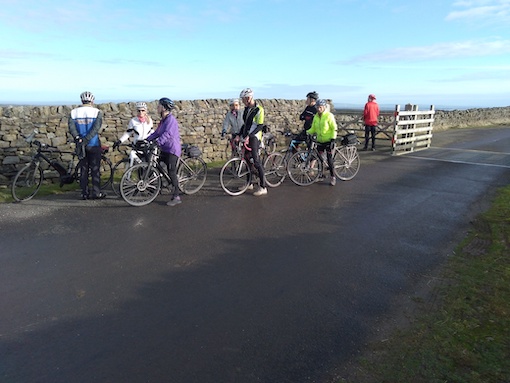 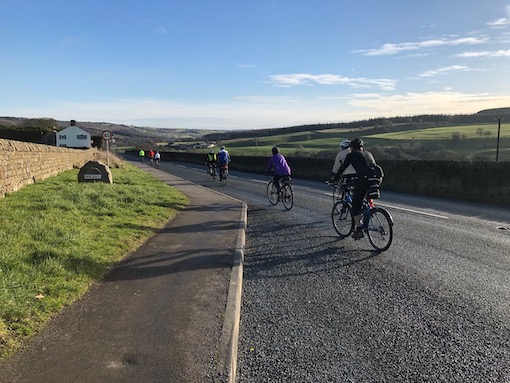 It was another painful lesson for a ride leader today.  If the Long Ride of two weeks ago was a tour of closed roads, today’s ride was a tour of closed cafes!  Again, despite contrary  indications on Coxwold tearoom’s website, we arrive to find a hand written notice on the door saying that the cafe was closed this month.  The nearest alternative was  at Byland Abbey but here again was disappointment (see picture).  Retreating tail between legs we arrived for a later-than-planned lunch at the Olive Branch in Easingwold. An excellent establishment, I think, it being my first visit.  A particular advantage is that the Breakfast Menu is available until 5.00 pm, from which crushed avocado with egg or a black pudding and bacon tower could be had.  I hope none of this detracted from a nicely varied ride in excellent bright and warm cycling conditions.  Sadly the same could not be said of some of the roads which were distinctly caked in mud from tractor movements.  But, we have to remember that while we are at play others are at work – a sobering thought as bikes are washed down later.  To add to the incidents of the day, Peter had to repair a puncture on the road to Whixley via the gated level crossing. Luckily for the route compiler, it seemed unlikely that the flat was caused by traversing the muddy lane from A168 to the level crossing.  On our return to Knaresborough, we were grateful for inputs from the three locals in the group who directed us via Lingerfield to miss the serious roadworks on the Boroughbridge road.  Successive farewells between Boroughbridge and Knaresborough left just three of the eight starters to make the weary climb up to the Golf Club and more road works at Bogs Lane.  Back into Starbeck at around 4.00 pm with the sun still just about in the sky, it was the conclusion of a grand day out (Grommit!) with mileages well into the bonus category for the third week in January – mid 60s for many and low 70s for one.  Followed up in the evening with tales of derring do by fellow travellers, it was also a day of total immersion in cycling.  Perfect.    TerryS

Certainly was, and my visit to see Dave Siswick, followed by returning via Markington, Scarah Bank and Ripley boosted my mileage to 78.  I don’t think I have ever done as long a ride in January before.  Quite a remarkable day!    EricW 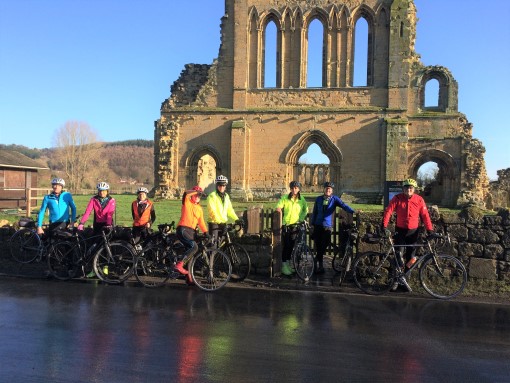 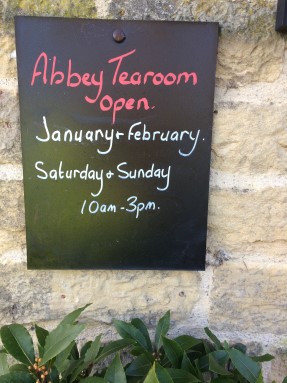 We had eleven riders at Low Bridge, enough for a Cricket Team, and with the state of the weather today we could have played cricket.

It was a warm spring day in the depth of winter with no wind, unbelievable.

The “B” team headed for Boroughbridge with a brief stop to divest ourselves of some of our winter gear, we were quite early and got the comfy seats in “our” cafe.

We were soon joined by some of the “A” team who had taken a long way round to get here, the topic for conversation today was, our first cars ,our worst cars, and our best car, such a subject could be seen as similar to religion or politics, but a four gentlemen we only laughed.

Then it was on to Roecliffe, Markington up the canny little hill and down to Ripley and home via the Greenway.

A nice little ride in great weather especially for Theo who has not been out for a while but got 31 miles in door to door.

Still can not get over the weather as we still have February to come known as “February fill dyke black or white”.     Dave P

The so called ‘A’ Team took a longer route via Lower Dunsford to Morries in Boro’bridge to satisfy the need for more miles and to socialise with the B Team. The discussion as ever was wide ranging from quantum physics through genetics, health issues and who was going to traveller’s tales that evening.

We said farewell to the B team and to Nick who headed straight home at his own pace. Dave W is default leader and he never fails to surprise. Having him as leader is a good way of keeping the group together because if you get too far ahead Dave will have invariably taken an unexpected turn. Daves W and P, Geoff, Colin, and I headed in the direction of Bedale and as we did so the sun came out to greet us! Dave P headed home early. Layers were removed and I even took my gloves off. For a still day there seemed to be a breeze unless it was the brisk pace we set. Even so by the time we had passed through Little Sessay, Topcliffe and Rainton, Bedale looked a bit optimistic and instead we headed towards Melmerby. The transport café was well timed and excellent, friendly and plentiful. Best of all we sat outside in the warm sun while we had beans on toast, egg on toast and a crab sandwich. Can’t recall what the others had.

Our route home through Hutton Conyers and Littlethorpe by-passed Ripon and some legs began to feel a bit heavy. We said our farewells at Farnham crossroads. We sometimes have a hug when we split up but if you ask we will tell you we are pretending to be Mark Cavendish and his team mates at the end of one of his 48 grand tour stage wins, we’re not being soppy!

Another great day out and proof, if proof were needed, it isn’t the destination it’s how you get there and who with. We did about 90 to 100km except Colin who got in a few extra, I had to get home quick to do the write up while I could still remember what happened! 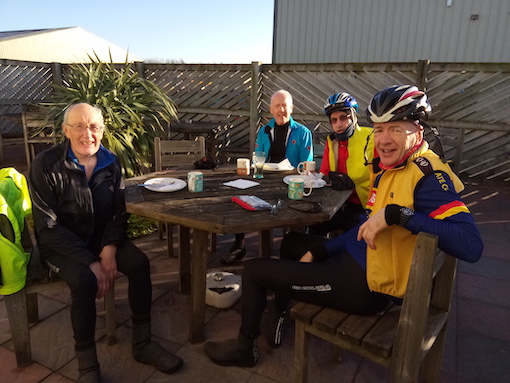 Jane and I were ready for a gentle slow ride to Wetherby. Everyone else who likes a nice poddle seemed to be incapacitated…due to many and varied reasons.  James kindly showed first time David our raring to go group. Surjon mending a puncture and Jane and I chatting.  New David asked us where we were going and then wondered if we knew the route.    At this point we felt he would feel safer with Dave Griff, Steve, Max and Paul B.  We were sadly wrong as he got lost before they reached Low Bridge despite two search parties retracing their bike tracks back up the hill from Low Bridge. Having lost Surjon to a strange wheel and Steve to a doctor’s  appointment and new David to a saddle malfunction they did 23 miles and spent a long time in Barker and Stonefall’s sun trap of a holiday spot, eating scones and cream and bacon sandwiches.  The Poddlers’, on the other hand, had a spring like 20 mile ride, a delightful coffee in the Castle Pub Spofforth having followed the decided route and certainly did far more miles than people sitting on the sofa all morning.      CG