The weather forecasts were awful… all of them so we could not choose the best one, there was no best. Sue rode to Killinghall bridge with us…..Jane took the baton from there.
We decided to cut the planned ride short and do a retro cycle via the Ripley Path to Clint Bank, Cut Throat Lane,and back to Ripley….we were too cold and wet to stop for coffee despite the rain easing up. The only positive things I can say about today’s ride was Jane and Sue and Jen and a shell shocked Rachel were out and about. We all had bikes and could all cycle our bikes.
We finished after 20 miles of icy water torture. I can safely say it was not a joy ,but we certainly gained a multitude of smug points. 20 icy wet miles. No photographic evidence our fingers were too cold. Caroline G

The weather had decided to take a turn for the worse this morning as the Wanderers gathered at Hornbeam. It was great to see Mike Wills, making a valiant effort on his electric bike to come and say hello to his cycling pals, despite the condition he is in. Mike is an inspiration to all, he is very brave and determined to make himself fit and well. Mike is facing a serious operation and will be in hospital a long time and WE cyclists wish him a speedy recovery and hope he will be back cycling with the Wanderers in the New Year.
Last Wednesday on a lovely dry ride, we joked about this week’s ride would be wild, very wet, possibly snowing and hills, as Liz F’s is leading, in which the weather prediction turned out correct. Despite the temptation of a bacon butty, few wanted to join me. I set off with five, lost one before we even got out of Hornbeam, then gained one by the traffic lights. Chris, Andrew (Lincs) David, Tim and me.
The group decided to cycle to Hampsthwaite and make a decision if we carried on or abandon the route. At Bilton Cross we picked up Mike and as we cycled along the Greenway the heavens opened and we got drenched. Reaching the traffic lights David and Mike decided to go home it was too wet. The four of us carried on, the rain and cold made Tim, hypotimho, all four of us were very wet and quite cold as we crawled into Sophie’s for warmth and a hot drink.
When we emerged warmer the weather had improved, Tim for an early lunch and Chris for the dentist appointment returned to Harrogate. Andrew and I decided that we would continue on to Fewston Farm Shop as the weather was drier. Andrew said it was only the exile from Lincs could cope with Liz and hills everyone else had abandoned me and also to keep me in check.
It was a lovely ride up Barse End Lane to Kettlewell and then we followed the original planned route up Staupes Lane and on to the Menwith gated road, (no Glyn the piper today) then across the A59, where we stopped at Fewston Farm shop. A lovely log fire warmed us up and full of beans we left drier and warmer than earlier and set off up the lane to Penny Pot.
Turning left off Penny Pot Lane we crossed the A59, swooped down to Kettlesing, along to Tang and on to Birstwith. Climbing up Clint Bank, Andrew said more hills, they don’t have many hills in Lincs, so I had to show him what he is missing, good Yorkshire hills!!
Despite the weather and cold we managed 32 miles and Andrew said 5000 metres of climbing, I think he might have exaggerated by 1000 metres. Photo by courtesy of Tim in Sophie’s as we thawed out. Liz F. 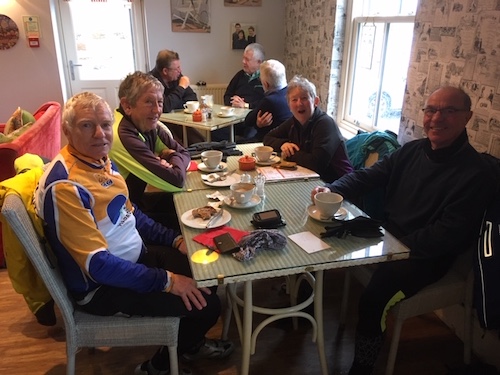 Today’s ride was something of a shock after last week when we were too hot! Martin, the architect of our route today mentioned Boroughbridge at which point the lure of the coffee, brack and cheese scones was enough to engage us. We then heard that the route would be a meander round Knaresborough, Goldsborough, Aldborough and any borough you can think of including Marton cum Grafton and Great Ouseburn.
Well it was raining and it was cold but to then abandon us in Knaresborough to go for a coffee and leave us to meander the boroughs caused us some amusement. Anyway we hope he got warm as we did as the rain eased and we missed out one loop but ended up at Bean where Zoe, Colette, Tim and Tony were already ensconced with their scones.
So warmed up and relaxed after some excellent banter we added some more miles with a return via Roecliffe, Bishop Monkton, Markington and the Greenway.
Everyone was amused by the Brexit 50p coin, (see photo ) and our parting shout was to “Keep Balancing”. As Kevin said you had to be there. Thanks to Bridget, Paul, Kevin, James, Charlie, Alan for a very cheery ride. 35 miles. Gia M 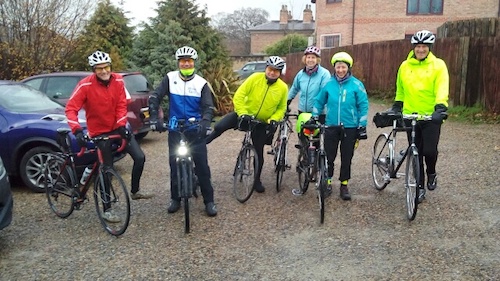 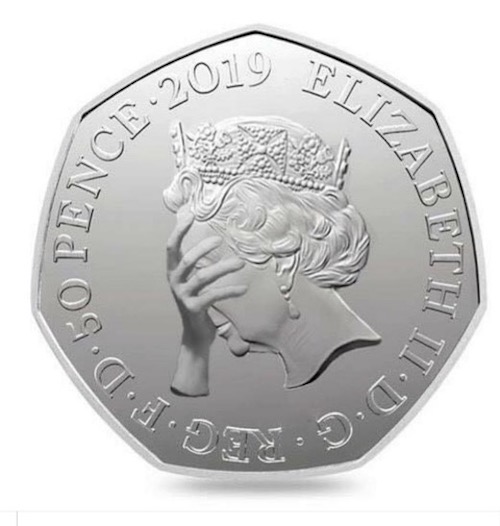 The day could not have been less promising at Low Bridge this morning. It was cold, and teeming down with rain, and with dark skies overhead.
Six hopefuls had turned out, and thoughts turned to Wetherby Morrisons. Bill was having none of it and set off in the opposite direction, I suspect, to one of the cafes on Waterside. I can’t say I blame him either.
Other Wheel Easy groups went by with the usual cheerful welcome; Chris and Dave W joined us on Abbey Road, and we dutifully slogged it out in grim (and very wet) determination, to receive a warm welcome from the café girls (I use the term with a slight reservation). Soon we were feeling better with a teacake and a cup of tea inside us, and all for only a couple of quid. Marvellous.
What next? was the question.
Answer, well now we’re out, York for a site inspection of the new Scarborough Bridge construction.
By now the weather had brightened and Tadcaster, Bolton Percy, and Bishopthorpe came and went, and Cycle Heaven welcomed us.
I say welcomed, but actually, we received possibly the worst welcome we had ever had. One member of staff in particular who took great delight in informing us that the beans on toast were “breakfast”, and that this finished at noon. It was now 12-45.
There were no other customers waiting to be served except the seven of us. There were three staff, who could not understand that b-o-t was the staple cyclists’ lunch diet, that this was supposed to be a cyclists’ café, and that the whole plateful could easily be prepared and served in less than five minutes. A poor show. Pity because it’s a great shop and a convivial place to stop and eat, but if they don’t buck up, they’re definitely going to lose customers. The cup of tea was fine, but beans rating non-existent due to no sample.
The weather was still fine and we cycled gently up the riverside cycleway to the aforementioned bridge, only to find little change from the last time we had visited a few weeks ago. You can see the tract of trees which are being felled where the new approaches will be, on both banks, and that’s all. We understand though that the approaches will allow cyclists to ride across the new bridge without dismounting, and we are expecting a similar construction to the Millennium Bridge. Watch this space. I understand that the bridge will be closing for the duration of the works in December.
Tail wind home, thank you, back in Knaresborough for 4-00pm.
Thanks to Chris, Colin, Phil, Dave P(2), Dave W, and Geoff for a ride out not to be missed. DaveS. 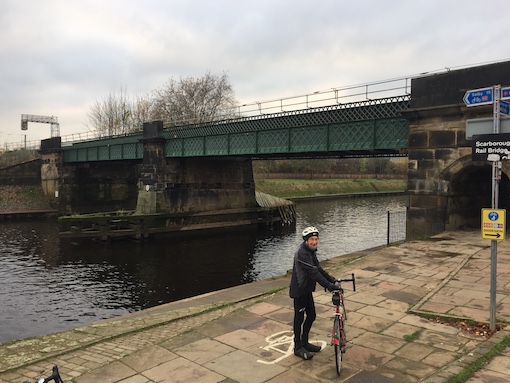